For the second successive season a number of supporters were attacked in Naples ahead of the match and one, named locally as Steven Allen, is understood to have collapsed at half-time of the Reds’ 2-0 defeat as a result of his injuries.

He was taken to hospital, believed to be Ospedale Antonio Carderelli, where he was later supported by Moore and officers from Merseyside Police, who travel to every overseas game in an advisory capacity. 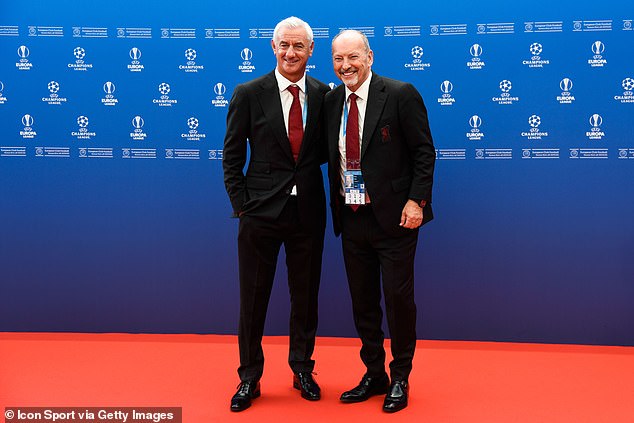 Late last night the Reds chief executive wrote on Twitter: ‘I’m at the hospital with Steven right now. We will not leave him until we are comfortable that he’s fine, so can everyone stop worrying for now.

‘Trying to get him seen by a doctor, but there’s a distinct lack of urgency here from the police and medical staff.’

He posted an update soon after stating: ‘The hospital staff and the police have now helped Steven and been very cooperative.

‘He’s been seen and will be monitored throughout the night. He asked me to thank everyone for their concern.’

Merseyside Police said there had been isolated incidents in the run-up to the match but told the PA news agency there had been no further reports of violence overnight.

‘We can confirm a Liverpool fan was taken to hospital during the match against Napoli last night, Tuesday 17th September,’ said a police statement.

‘The same man, aged 26, had been assaulted earlier in the evening in Naples with a second man, aged 46.

‘He suffered superficial cuts and grazes to the head and was treated at the scene before continuing to attend the match.

‘At half-time it is believed he passed out at the stadium and was taken to hospital for a check-up as a precaution. He has since been discharged.

‘Officers from Merseyside Police and representatives from Liverpool Football Club attended the hospital to check on his welfare.’