Cameras set up by council workers to stop people dumping waste illegally has repeatedly filmed people engaging in sexual acts, it has been claimed.

As part of a month-long trial Liverpool City Council, in Sydney’s west, set up a number of CCTV cameras along quiet stretches of road in an industrial section of Moorebank.

The cameras were set up to stop the illegal waste dumping to prevent health and safety concerns.

But since their installation the cameras have caught numerous couples engaging in outdoor sex acts, according to The Sunday Telegraph.

The council’s CEO Kiersten Fishburn said in a statement: ‘Illegal dumping can be dangerous, can contaminate the environment and is costly for Council or landowners to clean up.

‘The focus of the trial is to deter illegal dumpers. Council advised Police that the trial was being undertaken and will share its review of it – including any possible impact on other anti-social behaviour – with the Local Area Command.’

Ms Fishburn said any recordings of ‘anti-social behaviour’ would be shared with police.

In New South Wales public sex is outlined as a crime under the Summary Offences Act 1988.

The punishment carries a maximum of six months in prison or a $1,000.

The CCTV cameras are also able to broadcast messages on a loud speaker and council workers were able to interrupt one couple mid way through their rendezvous.

Ms Fishburn said the focus of the cameras was to deter illegal dumpers which is punishable by fines up to $4,000. 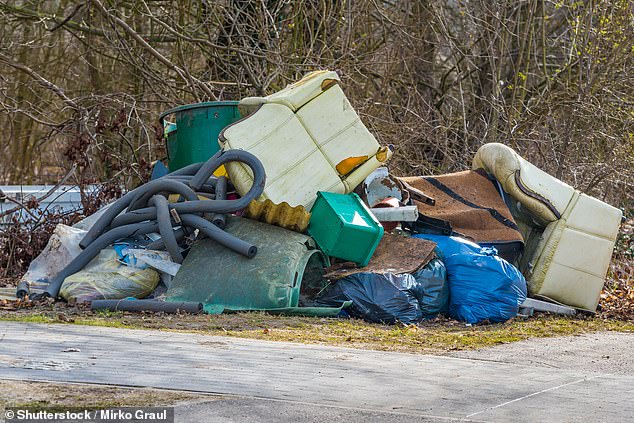