Liverpool fans hurled smoke bombs this evening outside Anfield as they ignored police advice to stay at home ahead of their side’s Premier League trophy presentation.

The team are playing Chelsea at the moment behind closed doors and will later will be presented with the Premier League trophy after the match. It will be their first title victory in 30 years.

Merseyside Police had asked supporters to stay at home and celebrate because of fears over the coronavirus being spread in the city. But hours before kick-off, hundreds defied police warnings and converged in the streets around Anfield.

They let off red flares, waved flags and blew carbhorns as the Liverpool team arrived on the coach and sang ‘champions, champions’.

Liverpool legend Sir Kenny Dalglish and current captain Jordan Henderson, who was lifting the Premier League trophy, had urged supporters to stay away.

But their appeals fell on deaf ears as police drafted in more officers to help keep the pavement crowds in check.

One fan John Manners,24, a delivery driver from Walton, said: ‘It’s so difficult for people like me. I’ve waited all these years since I was a kid at school for something like this. And I can’t be there.

‘There’s nothing we can do. But stand here and get close to the ground on the team as possible. 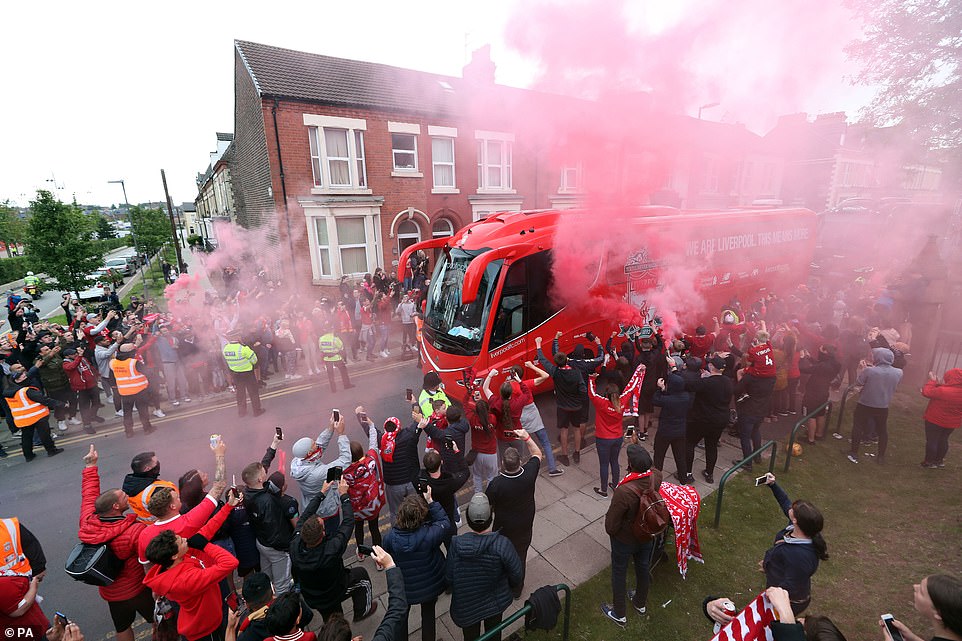 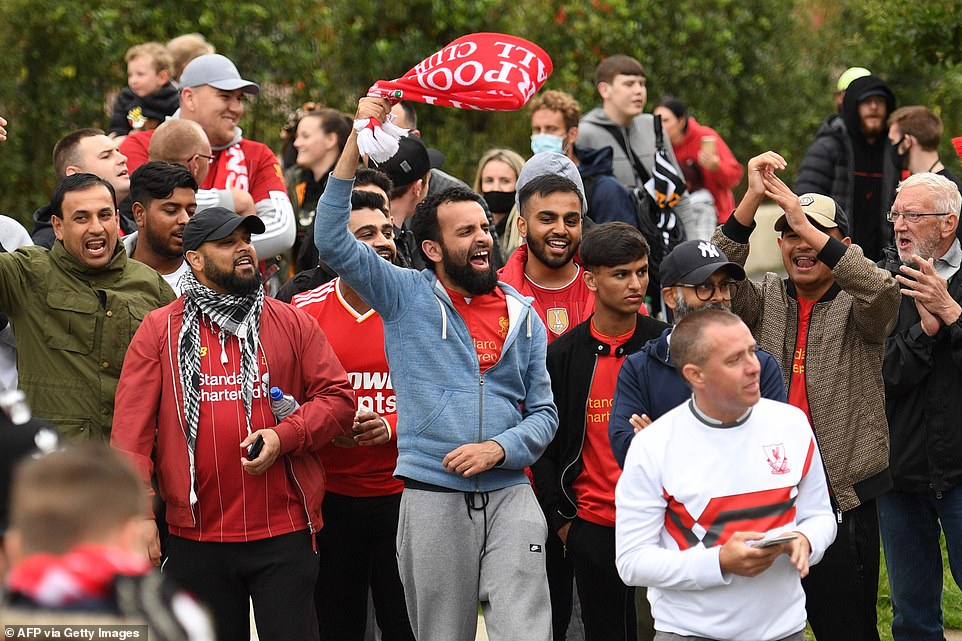 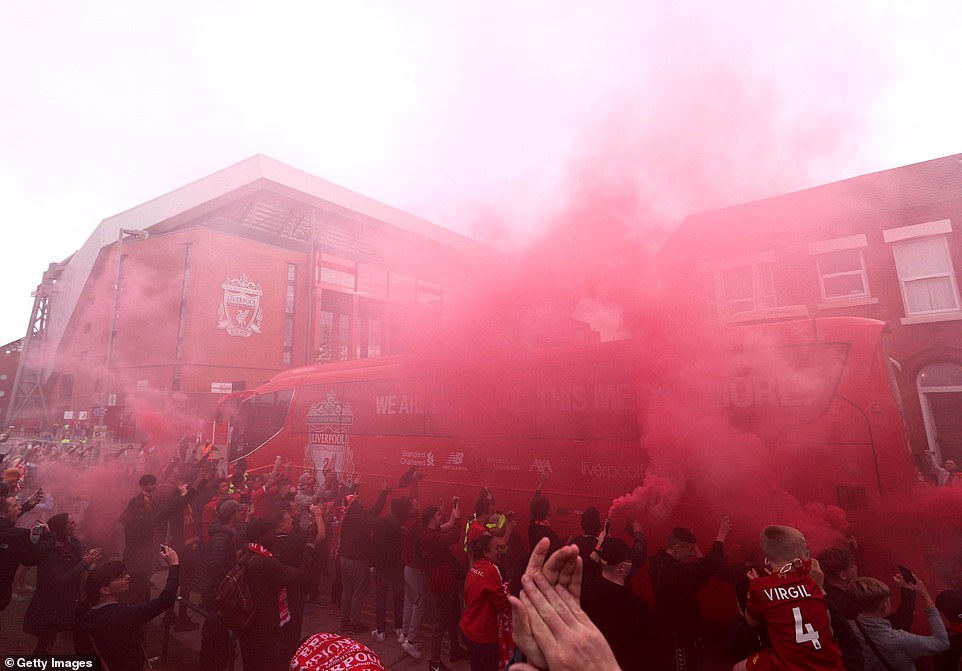 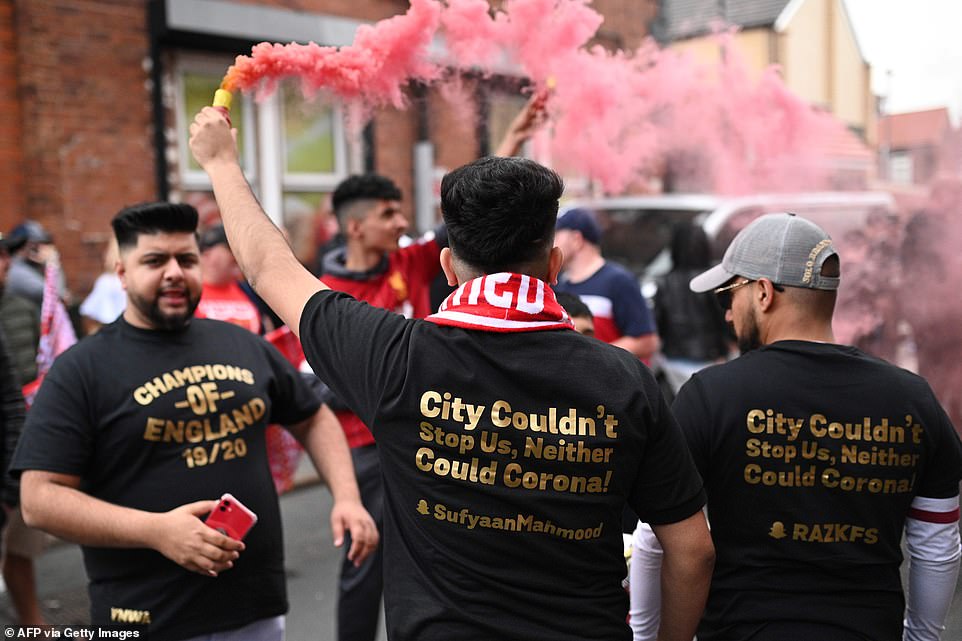 Liverpool fans celebrate with red smoke outside a pub near Anfield in Liverpool. The group of men pictured are wearing t-shirts saying ‘City couldn’t stop us, neither could corona’ 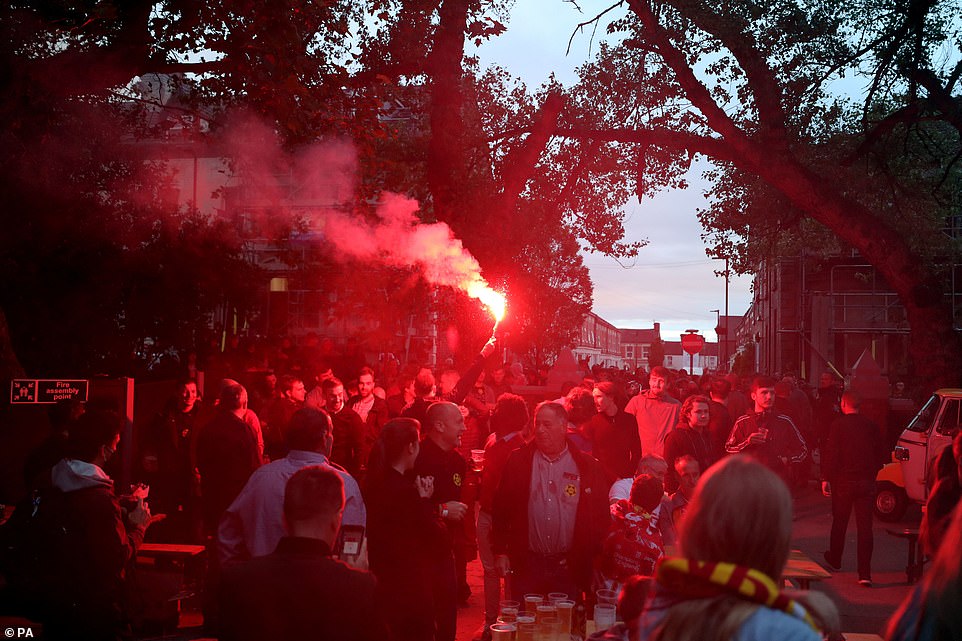 ‘ The police seem to be leaving us alone, which is a good thing. But it’s still our premiership.’

Another fan Lizzie Simkins, 19, from Bootle, said: ‘It’s quite surreal being out here when you know that all we have dreamed of is going on inside there.

‘My dad has followed Liverpool all his life. He has been to European games and been to hundreds of away games.

‘But he had the virus and it knocked him flat out for two months. He’s better now, but he’s still not 100 per cent.

‘My boyfriend and me are here to take loads of videos and pictures to send them to him so he feels some of the joy on these streets.

‘We are here for him as he can’t be here. We will remember tonight for the rest of our lives.’

Rizwan Ali, 29, from Dubai, said: ‘It was impossible for me not to come here. We have to have a party…I have come a long way.’

It comes as the ladies behind the men who brought Liverpool its first league title in 30 years were allowed into Anfield after agreeing to wear masks and socially distance. 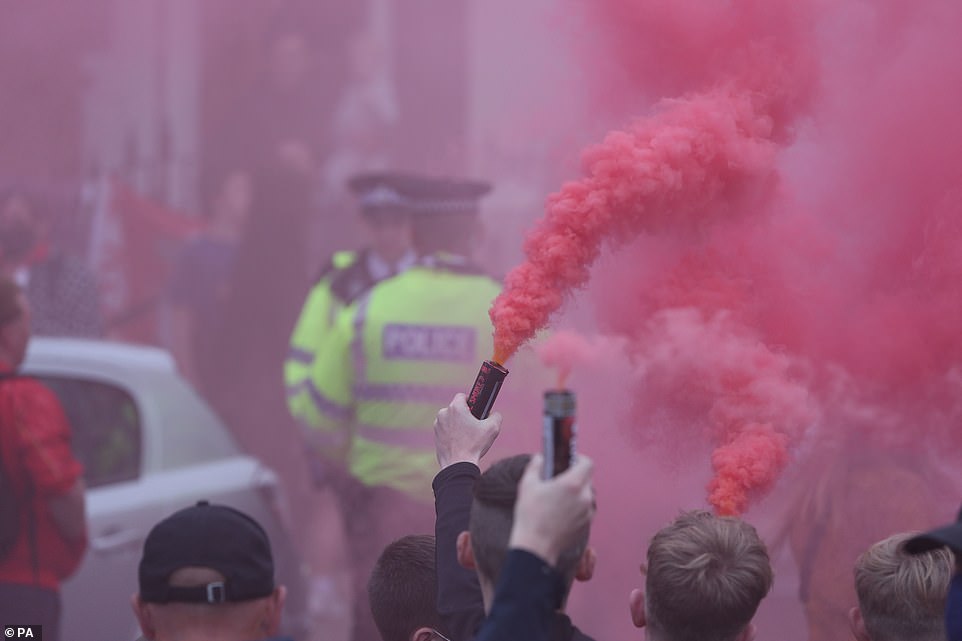 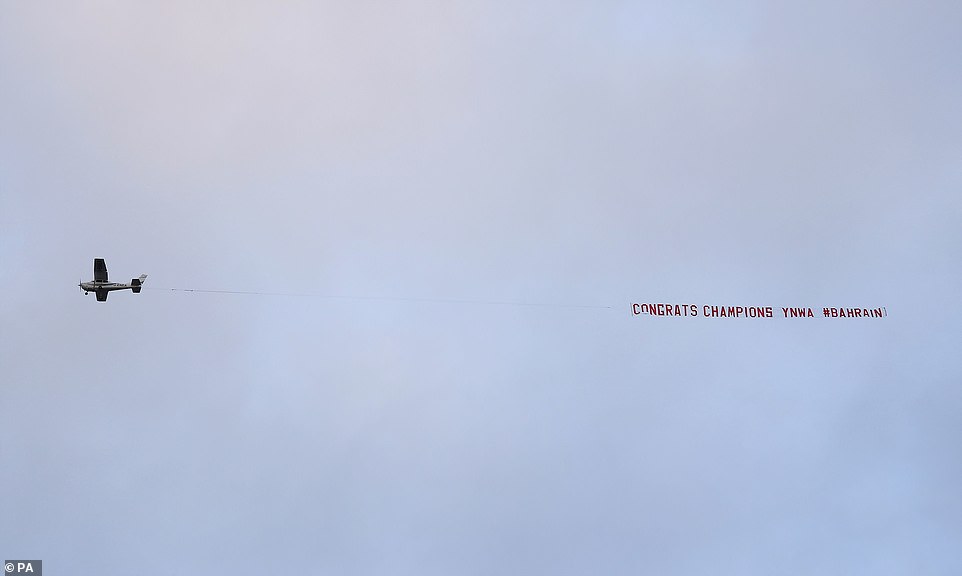 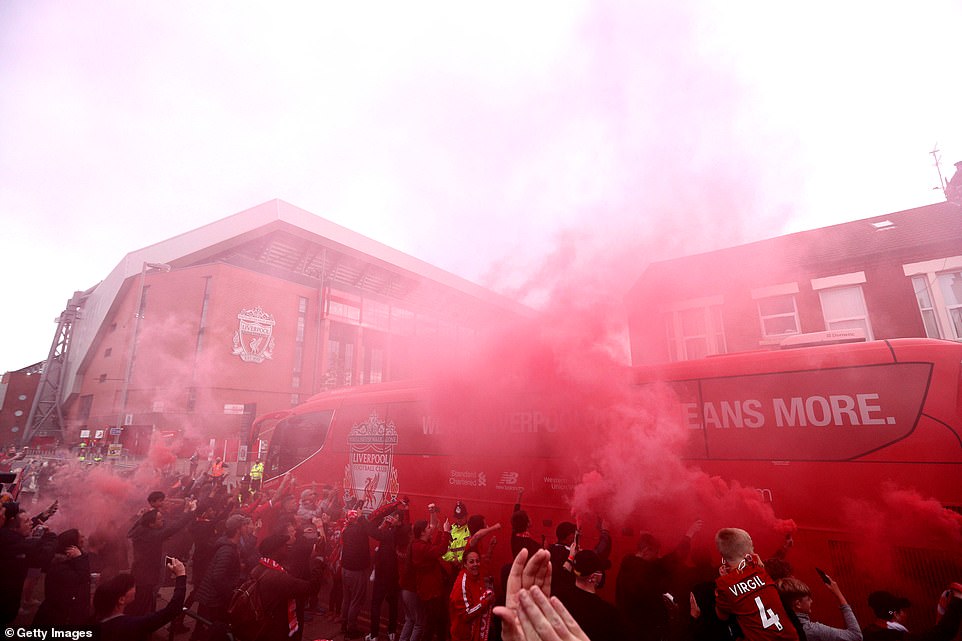 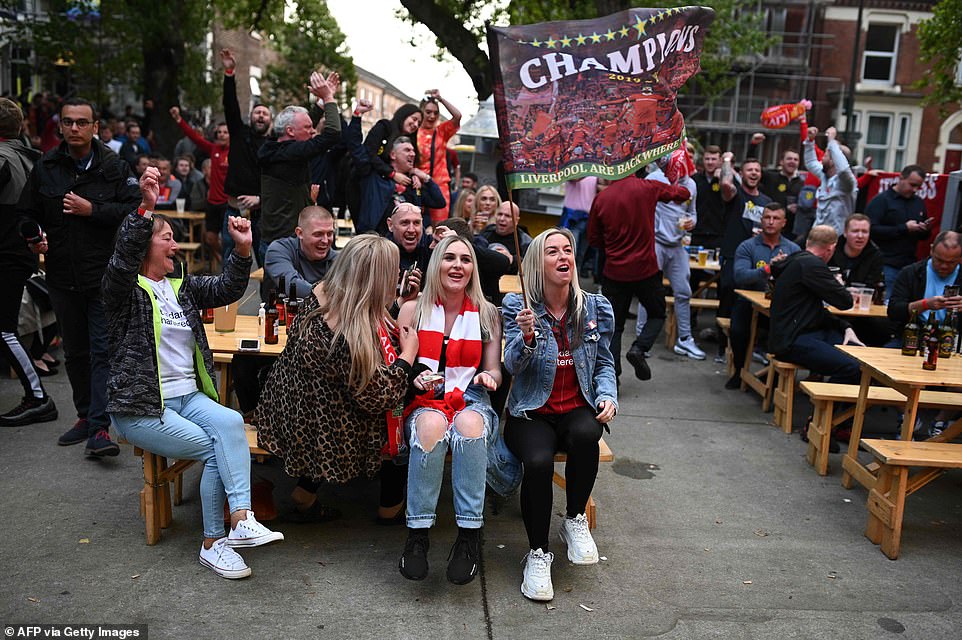 They were given seats in the ground’s executive boxes after a late decision to allow 300 people into the stadium was made.

The ground’s safety advisers reversed an earlier decision to bar extra guests from seeing Liverpool lift the trophy at the Kop end of the ground after the match with Chelsea.

Assistant Chief Constable Natalie Perischine, from Merseyside Police, said: ‘This is such an important night for all Liverpool fans in the city and worldwide, with the Premier League trophy to be lifted inside the stadium.

‘The club and TV companies have made careful preparations to ensure that millions of people can enjoy these special moments on screen, in the comfort of their homes.

‘On this occasion, the best seat in the house is in your living room. There is simply no benefit to going to the ground and we as a city cannot afford for people to gather in large numbers.

‘We are all still in unprecedented times due to the COVID-19 pandemic and the last thing anyone wants is a resurgence of cases in Merseyside, with every life lost a tragedy.

‘The last thing anyone wants is for all Merseyside’s patience and selflessness to unravel and for lockdown measures to be reintroduced, as we have seen in other areas.’

It comes the Liverpool manager Jurgen Klopp urged his squad to savour every moment of the title triumph this evening.

He said: ‘In the moment, when I spoke about the last 13 or 14 months, it was for sure the most exceptional and successful year of my career.

‘Being champion of Europe, England and the world, it doesn’t happen too often.

There will be some symmetry with Liverpool’s last title triumph in 1990 this evening as Jordan Henderson will replicate Alan Hansen in lifting the prize after missing the ceremonial match through injury.

Liverpool won that fixture against Derby 1-0 and Klopp would settle for the same score.

Liverpool fans are not the only ones celebrating a superb title-winning season this evening. Leeds fans are crowded outside Elland Road as they celebrate their return to the Premier League.

The team is currently playing Charlton, but fans will later see their club lift the Championship trophy. Authorities have reminded Leeds fans to celebrate responsibly.

A Leeds City Council spokesperson said: ‘Like all Leeds United fans, we are so proud that the club is back in the Premier League. We know how important it is, not just for fans, but for everyone associated with the city, and it’s understandable fans are very keen to celebrate this wonderful achievement. 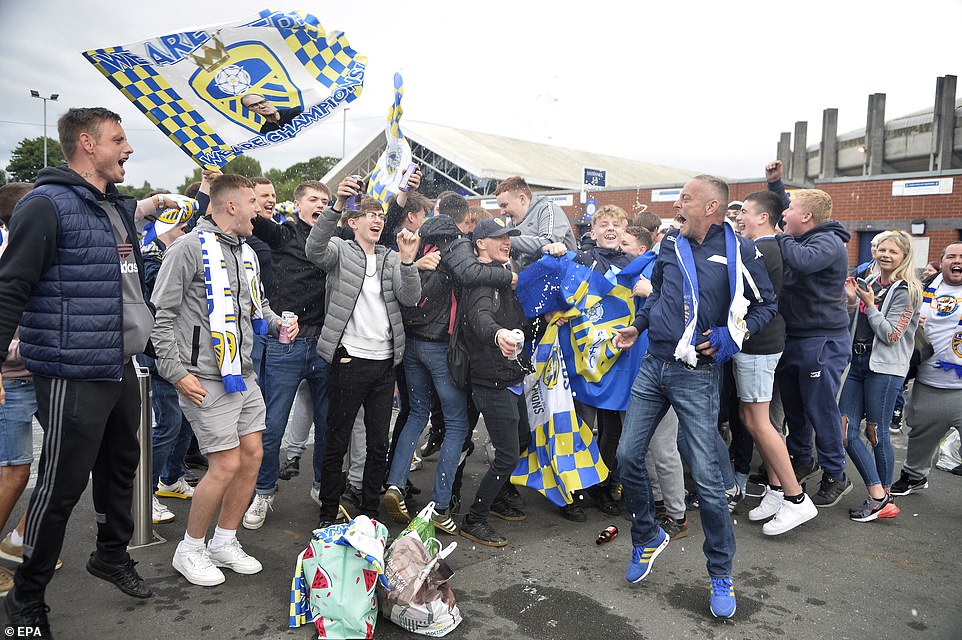 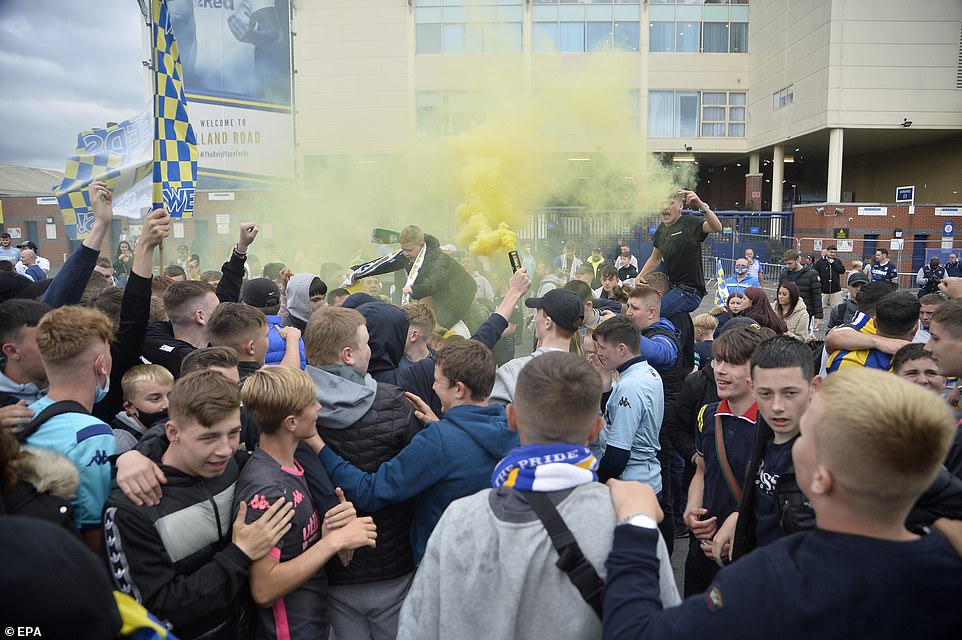 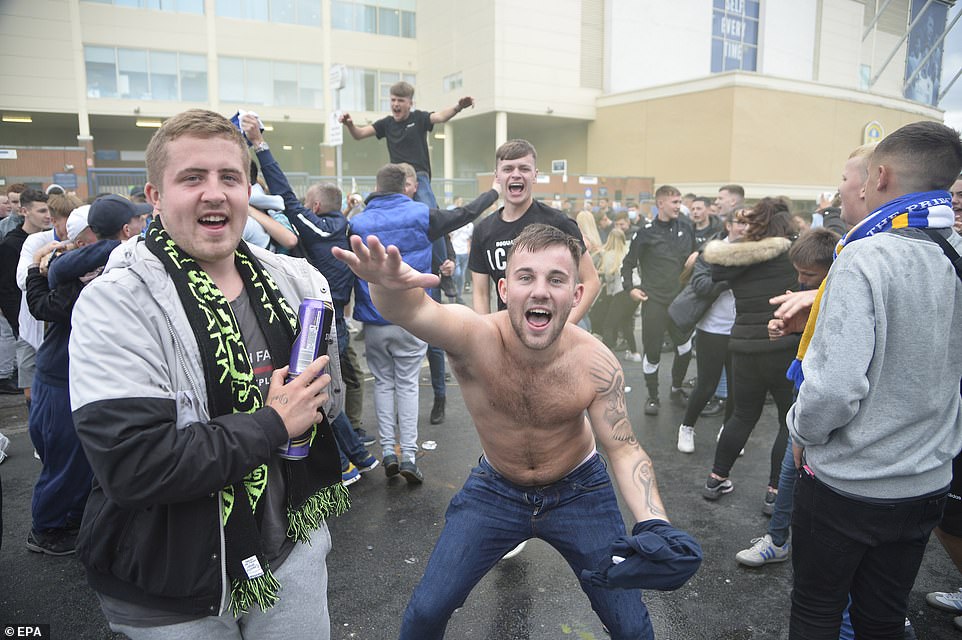 ‘Ahead of tonight’s match, we are however asking that people please don’t repeat what we’ve seen in terms of large crowd gatherings at Elland Road and Millennium Square in recent days, or at any other venue in Leeds.

‘This is extremely important as we continue to tackle coronavirus, and take all the steps that are necessary to protect people’s health and wellbeing, and that of others.

‘This must remain our priority for everyone in the city, and we thank you for your support on this.’

Fans have already begun chanting outside the stadium and a number of supporters have lit yellow flares.