Jamie Carragher leads the tributes to Peter Robinson, the former Liverpool chief executive and secretary, after his death at the age of 86 – as the club hail their off-field great as ‘a pivotal behind-the-scenes figure’

The club legend worked at Anfield from 1965 to 2000, and oversaw a stretch which saw the team win a total of 29 trophies.

Robinson was also at the helm for the tenures of Graeme Souness and Roy Evans, and stepped away on glowing terms at the turn of the century.

The Reds’ great is also highly acclaimed on Merseyside for having never sacked a manager during his time in charge.

We are deeply saddened by the passing of former club secretary and chief executive Peter Robinson.

The thoughts of everyone at Liverpool FC are with his family and friends at this difficult time.

As well as his roles at Liverpool, Robinson also worked at Stockport County, Crewe Alexandra, Scunthorpe United and Brighton.

In a statement released today, Liverpool said that the ‘thoughts of everyone’ are ‘with his family and friends at this difficult time’.

Jamie Carragher led the tributes after the tragic passing, tweeting: ‘One of the most important figures in @LFC success over many years. RIP PBR.’

The full Liverpool statement read: ‘Robinson was a pivotal behind-the-scenes figure at Anfield throughout a 35-year spell, which began shortly before the Reds’ first FA Cup triumph in 1965, when he joined as club secretary following jobs at Stockport County, Crewe Alexandra, Scunthorpe United and Brighton & Hove Albion. 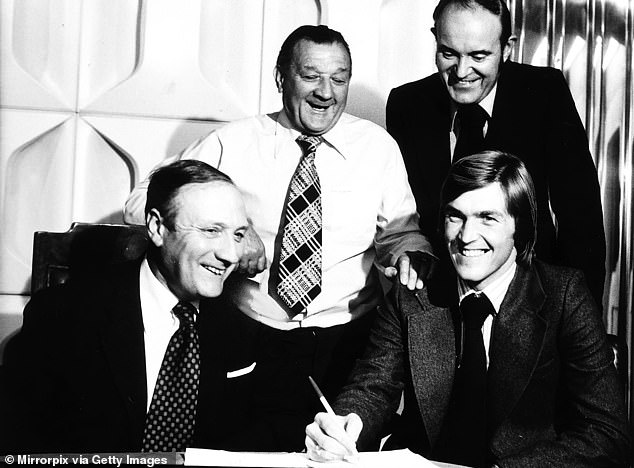 Robinson, who worked for the club from 1965 to 2000, is seen at Kenny Dalglish’s signing

‘In close and constructive partnership with chairman John Smith, he oversaw a modernisation of the club’s administrative operations with the objective of freeing managers to focus on their top priority: winning on the pitch.

‘He and Smith were closely involved in player recruitment during an era when the Reds repeatedly achieved masterstrokes in the transfer market.

‘And the pair drove forward improvements at Anfield, including a new Main Stand and floodlighting – under which so many special nights would unfold – in the early 1970s.

‘It was a set-up that helped to deliver overwhelming success as Liverpool became a dominant force – and trophy-gathering machine – first at home and then on the continent. 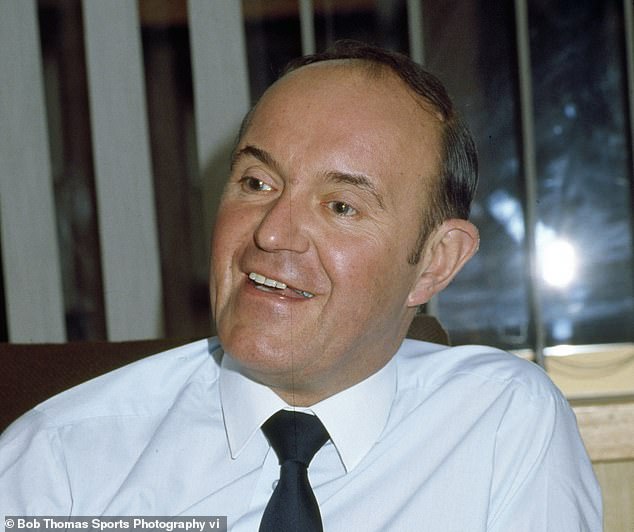 Liverpool’s official statistician, Ged Rea, wrote: ‘Deeply saddened to hear of the passing of one of English football’s greatest ever administrators and a man who will comfortably sit at the top table of Liverpool FC legends. Peter Robinson RIP. YNWA.’

Robinson is widely credited with helping to transform the club into one of the continent’s true heavyweights across the 1970s and ’80s.

During that time, the Reds lifted four European Cups, highlighting their dominance.