Grandmother dons a hazmat suit for a hug with her grandson, six, in joyous reunion after being kept apart for seven weeks during Covid-19 crisis

It was the tender reunion grandmother Sheila Abbott had been dreaming about.

And as she lovingly cuddled her grandson Mason, not even the fact that she was dressed head-to-toe in a hazmat suit could dampen their joy.

The 60-year-old, kept apart from her four grandchildren for seven weeks, went to extreme lengths to ensure they could be reunited in safety.

She was spurred into action when the youngest, Mason, began crying about their separation

Shiela Abbot from Liverpool was determined to see her grandchildren, including Mason, six, who began sobbing when she stood in his garden dressed in a full hazmat suit 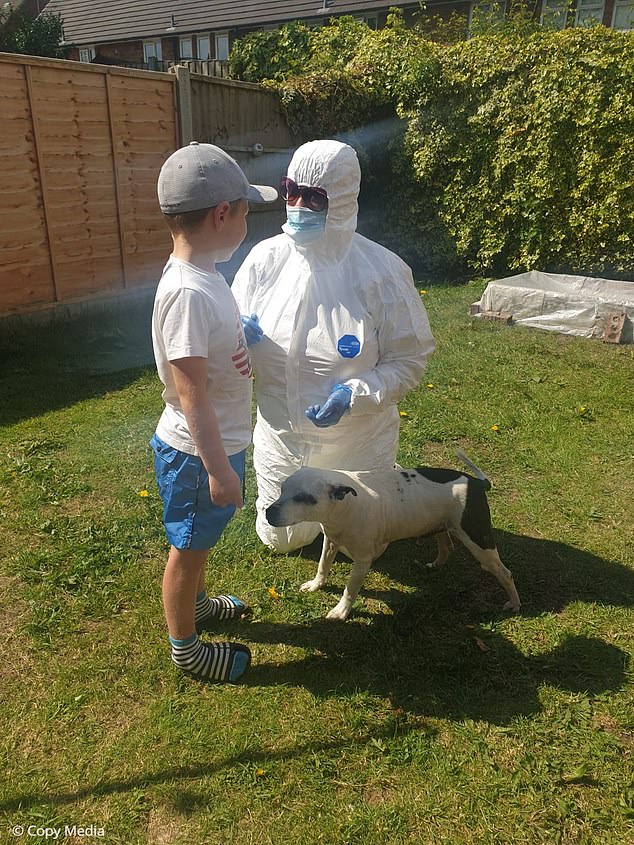 After seven weeks apart and inspired by a video of grandparents in the US, Mrs Abbott got hold of a hazmat suit from her son’s friend and paid her family a surprise visit

Mrs Abbott dressed in the protective suit and mask, and paid him a surprise visit.

She went into her daughter Stacey’s garden and waited until an overjoyed Mason, six, spotted her and ran into her arms.

The grandmother, given the suit by a friend of her son’s, said: ‘I went around the back of the house, put on all the protective kit and stood there while Stacey said to Mason “look outside, I’ve got a surprise for you”.

‘When he came running towards me I actually couldn’t hold him, I was so emotional, my whole body was shaking.

‘At first I don’t think he was 100 per cent sure it was me, but then when I got hold of him he put his hands on both sides of my face and stared at me and said “ah Nanny” because he knew I was crying.

Afterwards I said to him ‘Mason, this is the only way Nanny can come and see you for now’ and he said, “I know Nanny, because you die otherwise, don’t you”?’

The supermarket worker from Liverpool had only been able to talk to Mason over his garden gate. 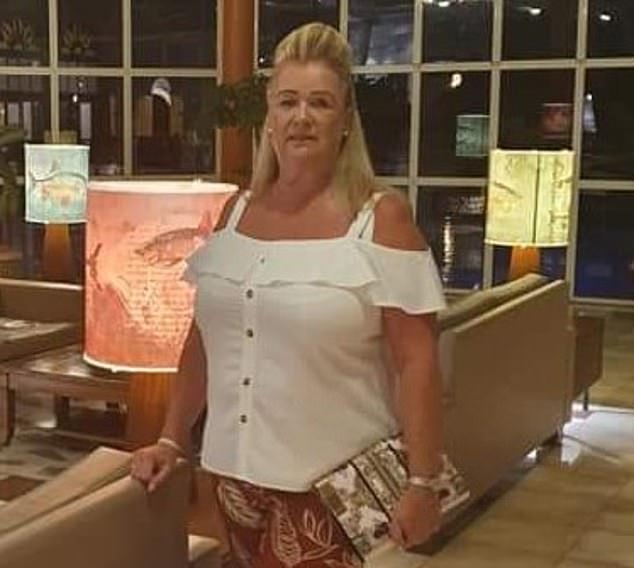 She said: ‘He was just sobbing because he couldn’t touch me.’

The friend of her son’s who gave her the suit is thought to have got it through work.

Mrs Abbott said: ‘I saw this video clip from America of a nan and grandad dressed in protective suits to see their grandkids so I sent it to Stacey and I said, “I’m doing this”.’

Mrs Abbott has already had a scare after her son Wayne needed intensive care due to the virus.

He is in isolation at home with his partner and Mrs Abbott’s three other grandchildren, Kayla, 17, Kiah, 15 and Kai, ten.