‘We wouldn’t say it was handball’: Liverpool’s penalty against Tottenham in Champions League final would NOT be given by VAR under new Premier League laws, says Mike Riley

Referees’ chief Mike Riley says a change in rules will stop VAR awarding frequent penalties for handball when the technology is introduced in the Premier League for the 2019-20 season.

Riley referred to the spot-kick awarded to Liverpool in their Champions League final victory over Tottenham for a foul by Moussa Sissoko as his case in point.

The ball struck Sissoko’s arm after a pass was played by Sadio Mane, but Sissoko appeared to be gesturing for players to move into position.

‘Sissoko’s a really interesting one,’ Riley told The Times. ‘In real time it looks a clear penalty. With VAR you can actually see what he’s doing, and he’s not interested in trying to block the cross, he’s saying to the covering defender, “Get over there and fill the space.”

‘That’s not a deliberate act of extending the arm away from the body. You also see the ball deflects off the chest on to the arm, and if you put everything together and apply the philosophy we do here, we wouldn’t say that was handball.’

Riley said officials will generally be more lenient on handballs due to laws being updated for the 2019-20 campaign.

The new Premier League rule states a player should not be penalised if they are believed to be using their arms for balance.

‘In this country we have always said – and this is the players and managers saying it to us – that arms are part of the game and as long as you are not trying to extend your body to block a shot then there is more scope so that we don’t penalise,’ Riley added.

‘What we don’t want to create is a culture when defenders have to defend with their hands behind their back or where it is acceptable for attackers to try to drill the ball at their hand to win a penalty.’ 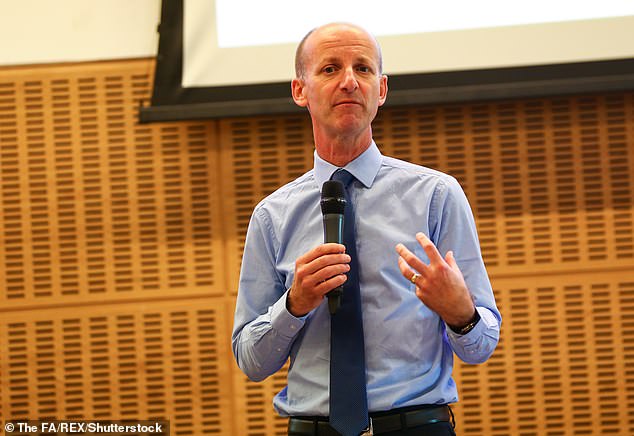 Riley has overseen the training of referees alongside the new technology and insists its presence from the start of the season will be primarily be to help officials avoid making clear and obvious errors.

‘Where VAR has been implemented successfully in other competitions it’s been a very high bar,’ he told BBC Sport.

‘We don’t want VAR to come in and try to re-referee the game. We actually want it to protect the referees from making serious errors, the ones everybody’s goes: ‘Well, actually, that’s wrong.’

‘If we keep to that really high bar there is more chance of keeping the flow of the game, the intensity of the game and people enjoying the spectacle of it rather than constantly referring to the video screen for changing decisions.’