Liverpool stars were in tears after Champions League heroics, reveals Xherdan Shaqiri as he admits entire squad was left ‘shocked’ by dramatic comeback

Xherdan Shaqiri revealed tears were shed in the dressing room as the achievement of overcoming Barcelona to reach a second successive Champions League final dawned on Liverpool’s players.

On a highly charged and emotional night at Anfield, the squad – players and backroom staff – celebrated as one with fans in front of the Kop after overturning a 3-0 first-leg deficit to win 4-3.

Many were visibly moved by the experience and some could not hold back once they had reached the sanctuary of the dressing room, especially after suffering heartbreak in a bizarre final against Real Madrid in Kiev almost 12 months ago.

‘Crazy. Everyone was shocked, like they couldn’t believe it. We were celebrating, some of the guys were crying. Me? No! I am just so happy, so happy to have helped,’ said the Switzerland international, making his first start since January 30.

‘We have achieved something special. The manager didn’t change things a lot. He just told us to perform, to keep going.

‘We knew everyone had written us off because of what happened in the first leg. It was an incredible performance. If you believe – if you believe in life – anything and everything can happen.

‘The fans, they pushed us to the end. They wouldn’t let us stop. It is so difficult to explain what happened in the game.

‘We got what we deserved. What an unbelievable night – maybe the best night there has ever been here. 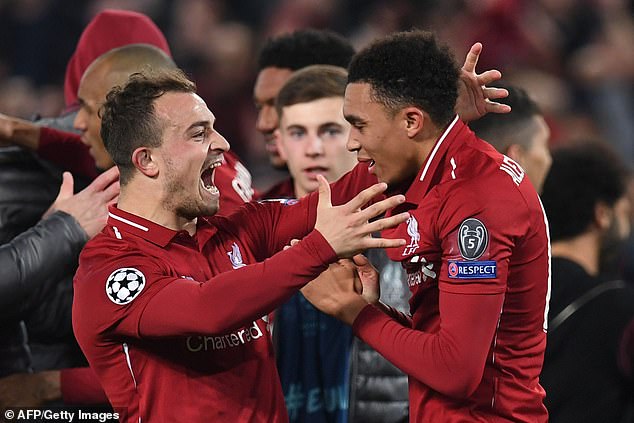 ‘We knew everything could happen and we are really proud of what we have achieved.’

Shaqiri has already won the Champions League with Bayern Munich but desperately wants to lift his first piece of silverware at Anfield.

And he said neither him nor his team-mates had given up hope of a twist on the final day of the Premier League season, which could yet deliver a first title since 1990.

‘I have won the Champions League with Bayern Munich and I know what it is like to win this title,’ he added.

‘It is the biggest one there is to win. It is the football stage in Europe, everyone watches you – everyone wants the trophy. I want to win it a second time. 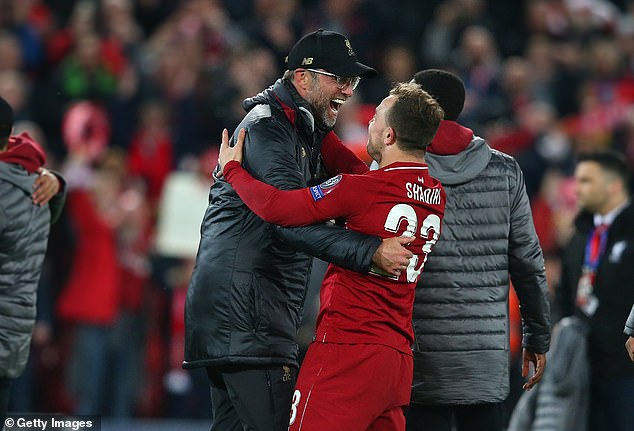 ‘But there is a long way to go. It is difficult to speak about the final now as we still have one more Premier League game.

‘We want to finish the season well. Man City have the lead; they have to lose or draw and we have to win.

‘We are happy to be in the final. If we don’t win the Premier League, at least we have a chance to win the Champions League.’