Emre Can is losing his bid to be fit for Liverpool’s Champions League final against Real Madrid.

The midfielder underwent a scan on an ongoing back problem on Monday, but the results have come back inconclusive and now further tests are required before he can return to training.

He will now remain in Germany until next week at the earliest, which gives him a maximum of just two weeks to prove his fitness to Jurgen Klopp ahead of the final in Kiev on May 26.

Can’s absence will come as a big blow to Klopp because the indications at the end of last week were that he would be able to return to training sooner rather than later.

He said on Friday: ‘Emre will be assessed on Monday to check how it has improved. He has done a lot of things and it feels really good but in the end you always need a doctor to tell you: “Now it’s fine, now you can go again”.

‘That’s the situation. I think he will have a scan and then we will know more.’ 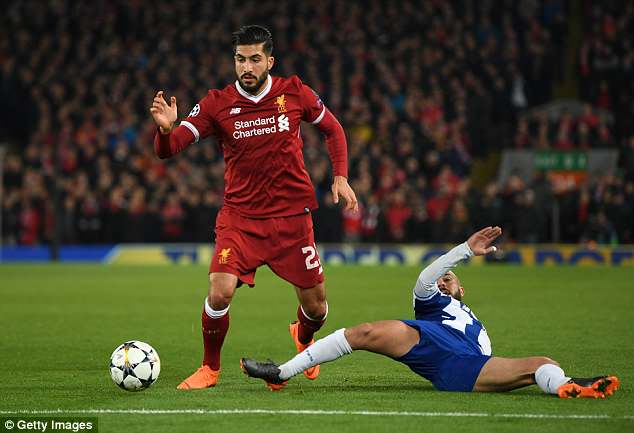 Can has not played for the Reds since the middle of March and with his contract set to expire at the end of the summer, it is entirely possible that he has already played his last game for the club.

Liverpool have been working hard to convince him to stay but the expectation now is that he will leave on a free transfer with Serie A champions Juventus favourites to sign him.

There is no indication at this stage whether he is a doubt for the World Cup, but any lingering concerns over his fitness is likely to make Germany manager Joachim Low consider other options for his squad.