Liverpool stars fume over FIFA 22 ratings with Joe Gomez branding it a ‘shambles’, Virgil van Dijk ready to start a petition to raise Joel Matip’s dribbling and Jordan Henderson dumping his VIP copy in the bin

Liverpool stars Mohamed Salah, Sadio Mane and Jordan Henderson could not hide the disappointment after being told they had been downgraded on FIFA 22.

Andy Robertson and Virgil van Dijk were filmed handing out VIP copies of the game to their team-mates on Friday.

The duo also had to break the bad news of a drop in ratings for several players – and it didn’t go down well at Liverpool’s AXA training centre in Kirkby.

Forward Salah, who has been downgraded to an 89 overall rating in the latest edition of the EA Sports game, was the first to voice his disapproval.

‘Why’ve you been downgraded Mo? You’ve gone down by one,’ asked Robertson.

‘I don’t know! I scored more goals last season than the season before I think,’ reacted Salah.

‘You know what as well Mo? I’m stronger than you,’ Robertson quipped. 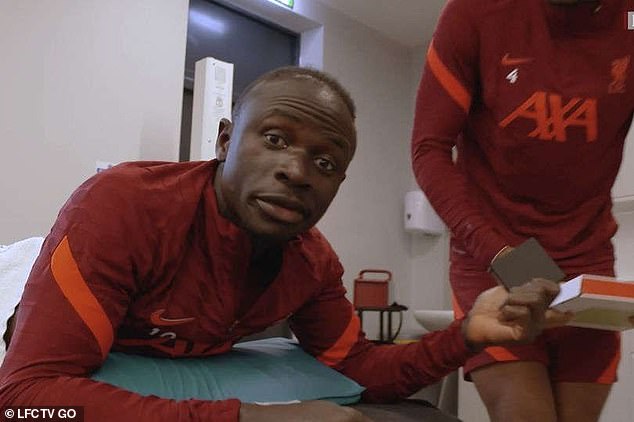 ‘Milly! Milly! Can you please explain this to me? Robbo is stronger than me!’ Salah shouted across the treatment room.

Van Dijk then revealed Sadio Mane’s rating to the Senegalese winger, ‘I’m not happy! I’m not happy!’ he responded.

The duo then went over to Curtis Jones, with the midfielder only rated at 73 overall, making him a silver quality card to the shock of his team-mates. 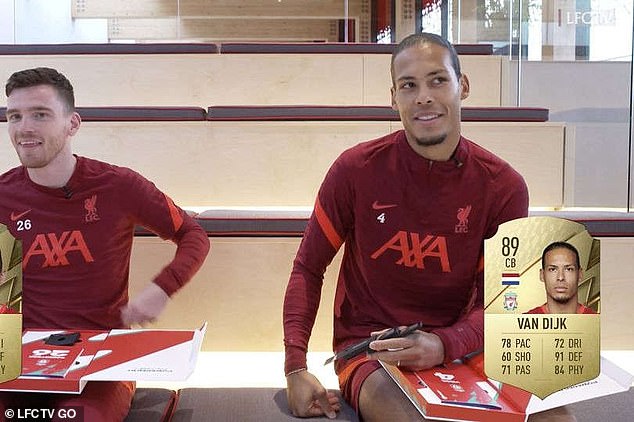 Robertson then approached captain Jordan Henderson in the canteen, saying: ‘Beware guys, this one could get aggressive.’

‘You’re joking? What was I last year? Has anything gone up?’ questions Henderson.

The pair found Joel Matip and revealed his rating, with van Dijk unhappier about Matip’s rating than his fellow defender.

’68 dribbling? Are you kidding EA Sports?’ he said. ‘I’m starting a petition to have Joel Matip with 85 dribbling at least!’

Henderson is filmed dropping his VIP copy of the game into the bin, but he quickly retrieves it.