The goalkeeper admitted he felt his errors cost his team the game but, despite his heartfelt apology, fans took to Twitter to issue death threats.

‘My Liverpool boys fought hard and I’m proud of them. Except for Karius, he can die in a hole,’ wrote one Liverpool fan.

In disgrace: Loris Karius covers his face as he disembarks at John Lennon Airport in Liverpool

Some tweets called the German keeper a Nazi, while others directed vile threats towards his family.

One sickening football fan threatened: ‘Get out of our club or die.’

After the final whistle blew Karius had made his way over to the stands where he apologised to fans who had made the 1,500-mile journey to Kiev – only to see their team lose.

‘If I could go back in time, I would. I feel sorry for my team. I know I let them down,’ he said in the wake of the match.

‘It’s very hard right now but that’s the life of a goalkeeper. These goals cost us the title, basically.’

‘I have only had very few words [with Karius] after the game but there’s nothing to talk about in the moment,’ he said.

‘It’s really hard for him. Nobody wants that. The mistakes were obvious. We don’t have to talk about them. He knows it, I know it, you all know it.

‘I’m sorry for everyone – from the team, from the whole club – that the mistakes cost dearly.’

But the torrent of abuse continued this morning with Liverpool fans throwing intimidation and abuse at the goalkeeper and his family.

However, among the threats were voices speaking out in defence of the 24-year-old. 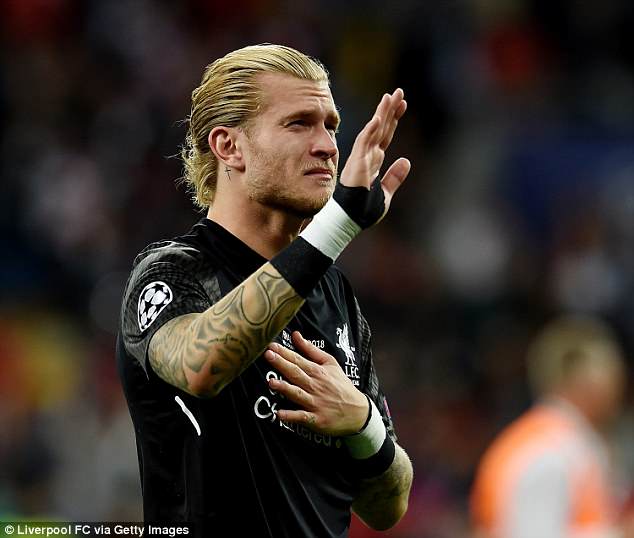 Karius, pictured, apologised to Liverpool fans who travelled to Kiev after his two errors cost the team the game

Liverpool fans were slammed for the continued torrent of abuse.

‘But all these people tweeting him that they hope he dies, or kills himself or that his sons get cancer. You should take a real good look at yourselves.

‘This world is really full of totally f****d up horrible tossers.’

Another added: ‘The people who are tweeting Loris Karius saying they hope he dies are not Liverpool fans; they are disgusting human beings.’

Social media users also commended the Real Madrid players for comforting Karius in the wake of the match.

As the final whistle blew, viewers at home noticed that it was players from the opposing team who were the first to go over and console Karius.

Social media users blasted the Liverpool keeper’s fellow stars for not also rushing over to their teammate. 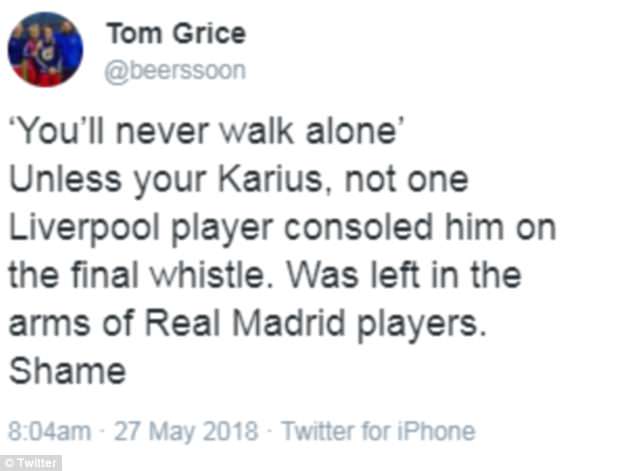 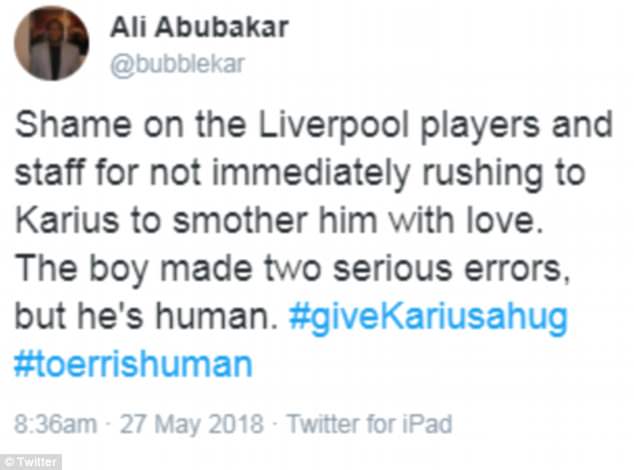 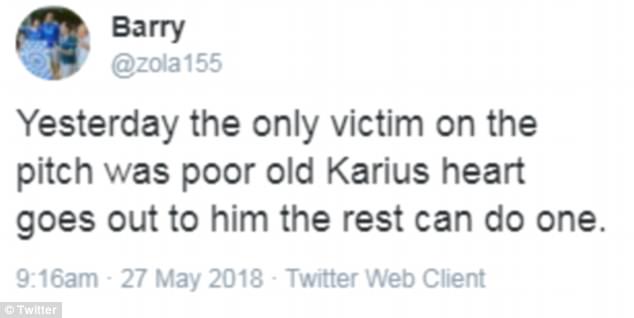 ‘Shame on you’: Social media users slammed Liverpool fans overnight after they directed a torrent of abuse at the team’s keeper

One wrote: ‘Not a single Liverpool team-mate is consoling Karius, only the Real Madrid players. So much for ‘you’ll never walk alone’.

Another added: ‘Karius has to be picked up by Real Madrid players. No Liverpool team-mates in sight. Poor sod.’

Others described Liverpool’s post-match behaviour as ‘utterly classless’, with one noting: ‘Real Madrid players go over to console Karius. Not one Liverpool player comes near him.’

Another use took to Twitter to say: ‘Poor Karius. Leaving him there crying into the turf. Real Madrid players coming to support but NOBODY from his own team. This is the worst moment of his life.’

Karius will have to live with his mistakes ‘for the rest of his life’ after the German’s blunders cost the Reds any chance of victory, according to former Liverpool goalkeeper Ray Clemence. 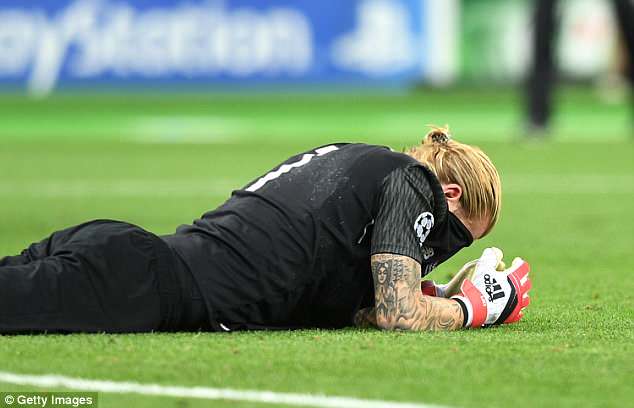 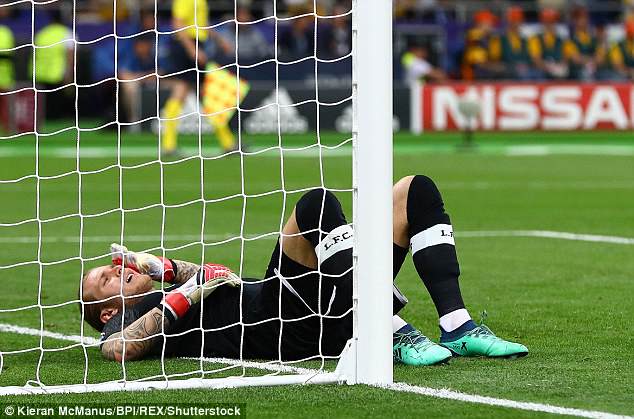 He had been capped at international level for Germany at youth levels up to the Under-21 side.

However, he had never played for a senior side until he arrived at Liverpool. He was installed by boss Jurgen Klopp ahead of Simon Mignolet earlier this season.

Former players including Rio Ferdinand and Gary Lineker were among those to comment on Karius’ ridiculous mistake.

Karius attempted to throw the ball to his team-mate Virgil Van Dijk but Benzema took advantage of his mishap to put Real in the lead.

Ex-England cricketer Michael Vaughan also had his say on the incident. He wrote: ‘Karius will receive the Freedom of Manchester on Monday at a civic reception !!!’

Karius went on to make another high-profile mistake later in the game as he was unable to hold Gareth Bale’s shot, which made it 3-1.

It was the goalkeeper’s first error, however, which received the most criticism. 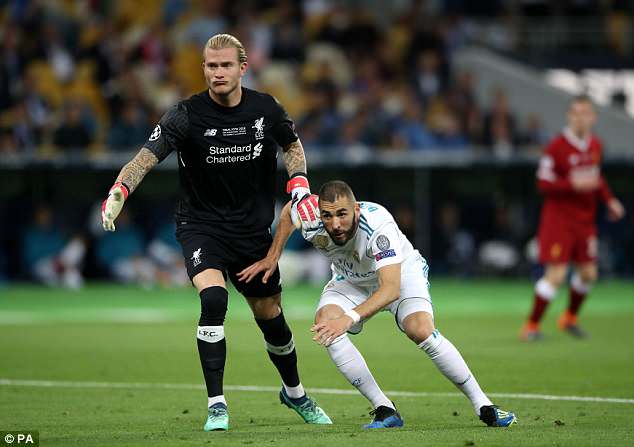 Karius attempted to throw the ball out, but it struck Karim Benzema, who went on to score 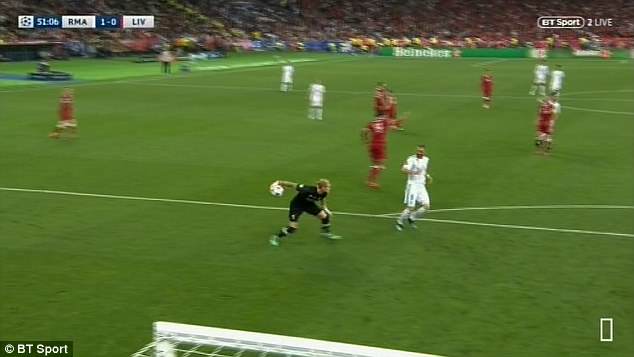 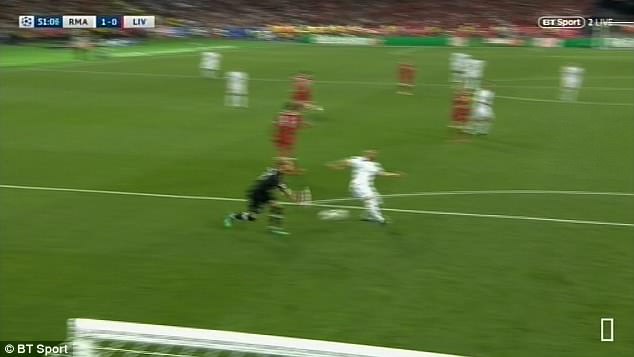 In an apparent brain freeze, Karius rolls the ball in the direction of a defender but apparently without noticing that Benzema is stood just a few yards away 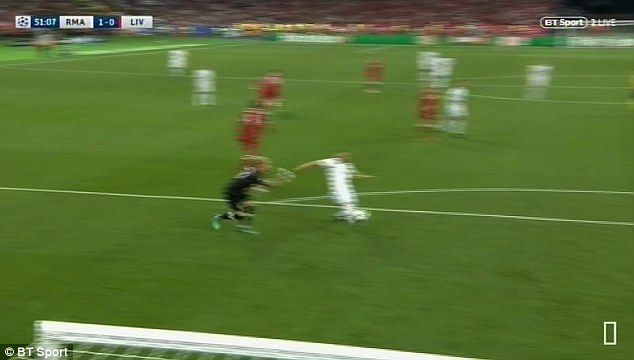 Benzema, who is alert to the possibility and hasn’t taken his eyes off Karius, stretches out a leg to intercept the throw 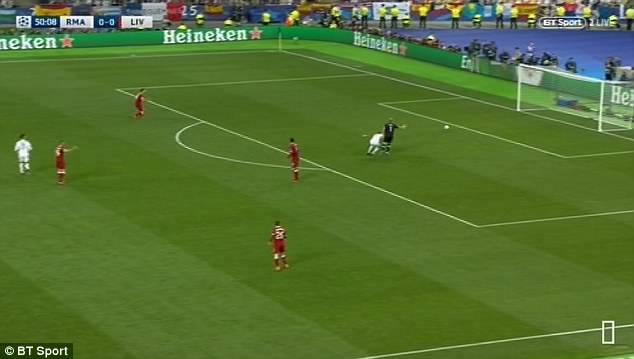 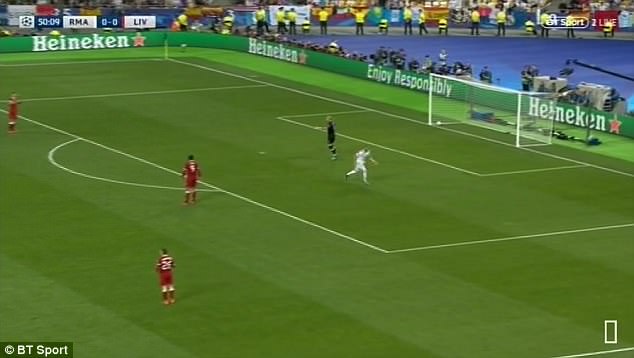 Benzema, realising the ball is just going to creep inside the post, runs off in celebration as Karius continues his protestations

One user, El Jefe, called it the ‘stupidest goal ever’, with Karius’ blunder leading to the goalkeeper receiving much criticism on social media.

MUFCHolic questioned comparisons between Karius and David De Gea, which had been made by some Liverpool fans earlier in the season. He wrote: ‘Remember when they said Karius was better than De Gea because he played well for a month?’

Another user, Loso, wrote: ‘Even if Liverpool win Karius cannot show his face in Liverpool after tonight’.

Meanwhile, MFinzi tweeted: ‘Imagine travelling all the way to Kiev to have Karius make the biggest mistake of his career. Actual tears.’

Karius arrived at Liverpool from Mainz in 2016 and endured some difficult moments early in his spell at the club as he made some high-profile mistakes.

The 24-year-old has shown some significant signs of improvement this season and firmly established himself as Jurgen Klopp’s first-choice goalkeeper ahead of Simon Mignolet.

However, Karius’ major error on the biggest stage in club football certainly won’t be forgotten in a hurry. 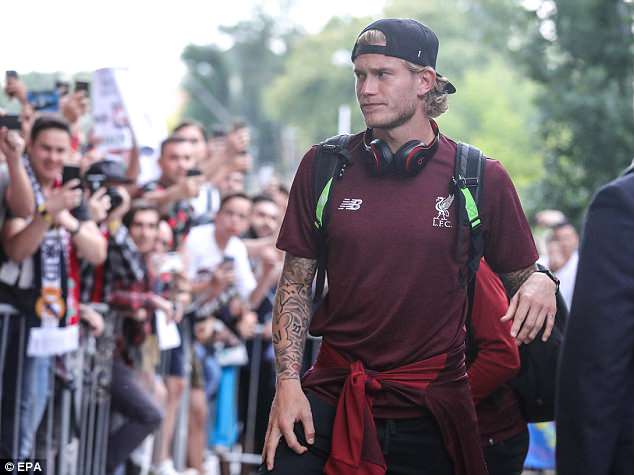 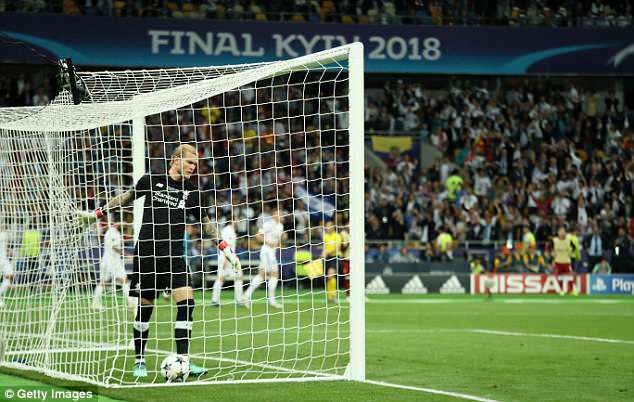 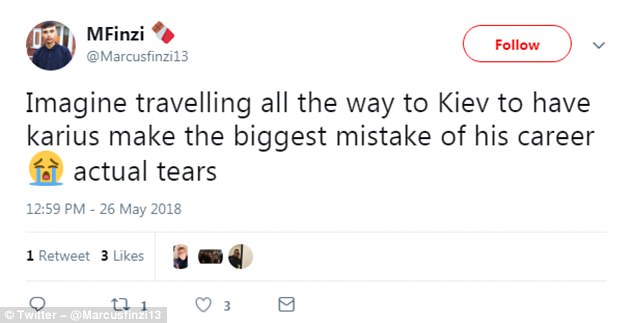 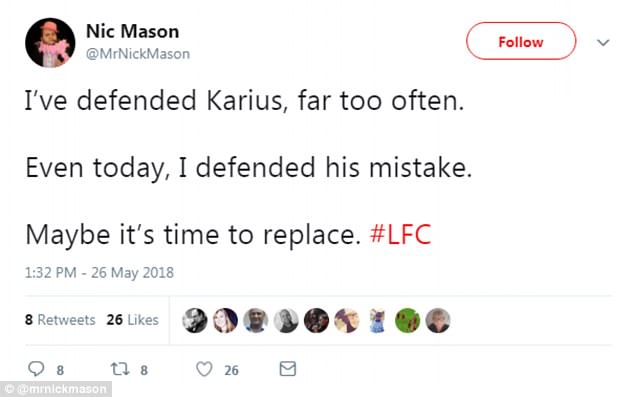