Real Madrid cavorted and danced with the European Cup. As they laughed and clapped and celebrated with their supporters, the Liverpool manager Jurgen Klopp bade his players walk with him to the end of the NSC Olimpiyskiy where their fans stood to commiserate with them one more time.

At the back of the group of players, Loris Karius hesitated for instant. It seemed as if maybe he could not take any more of the pain but he put his head down and began the long, slow march into the ignominy that will be his cursed companion for longer than any sportsman truly deserves. 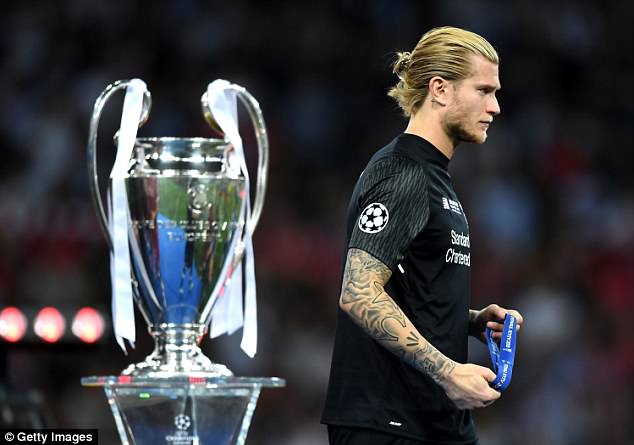 Bill Buckner played 21 seasons of Major League baseball but he will always be remembered for allowing a ball to squeeze between his legs in Game 6 of the 1986 World Series when his Boston Red Sox were on the brink of victory against the New York Mets, who went on to win the series. In the same way, Karius may always struggle to outrun the memory of one awful, awful night in Kiev.

Even as the game was coming to an end, many were pleading that Karius be offered support in its aftermath. The pressure on players today is so high, the spotlight so fierce, that sometimes things crowd in on young men who may feel they have suffered humiliation. It was a night to feel sympathy for Karius and to hope that his career finds redemption soon.

One of the things that condemned Karius was that his mistakes were so outlandish. They were not matters for debate. There could be no arguments about whether he was at fault at not. In their own way, they were almost as spectacular as Gareth Bale’s magnificent overhead kick.

Bale’s goal made sure the night will be remembered for beauty, too, but this was an evening when football reminded us how cruel it can be, too. Liverpool were already reeling from the loss of Mohamed Salah, who had left the pitch in tears with a suspected dislocated shoulder and may now miss the World Cup, when Karius threw the game into Madrid’s hands.

Six minutes of the second half had gone when he collected an overhit pass and prepared to roll it out to Trent Alexander-Arnold on the Liverpool right. But he ignored the lingering presence of Karim Benzema and as the ball left Karius’s hands, the France forward stuck out a boot and deflected the ball into the net. Liverpool protested wildly but only because they were so stunned by what happened. Only because it was so unusual. It was unusual but it was not illegal. Benzema had done nothing wrong. Karius looked as if he could scarcely believe what had happened.

His night got worse. Liverpool dragged themselves back into the game almost immediately with an equaliser from Sadio Mane and even after Bale had put Madrid ahead in the 63rd minute, Liverpool were still threatening to draw level again even as the game ebbed away from them.

Then, seven minutes from time, the fates picked on poor Karius again. Bale cut in from the right side and let fly with a speculative shot from 25 yards. It moved a little in the air but it was straight at the goalkeeper. Karius tried to punch it away but it was fiercely hit and it went through his hands. There was a moment of disbelief and then the Real Madrid supporters erupted in celebration.

There would be no way back from that. No miracle this time. No new chapter to add to Liverpool’s glorious past in this competition. Just bitter disappointment and the abject misery of one man. ‘I don’t like this part of the sport that things like this can happen,’ Klopp said after the match when he was talking about Salah’s injury but he might just as well have been talking about Karius.

The Germany player cut a desperately forlorn figure after the final whistle. He collapsed to the turf and had to be helped to his feet by teammates but he was inconsolable. Of all the tears that flowed on an emotional night of broken dreams, broken bodies and shattered hopes, the most bitter and the most copious were shed by him. As he walked towards the Liverpool end for the first time with his dejected colleagues, he wept openly and tried to cover his face with his black shirt. It must have felt like a hair shirt. When he let the shirt drop, he held his hands up towards the fans in a gesture of apology. He was accepting the blame. He did not shirk that.

It may have been that the departure of Salah was a more significant moment than either of his errors but in that moment, rationality had departed for Karius. As the Liverpool team moved forward to collect their losers’ medals, the Real Madrid players formed a corridor and commiserated with them. Karius could not look them in the eye. He kept his head bowed.

He took his medal and, to his credit, he trudged over to where the officials were waiting and shook hands with them all. By now, the idea of blaming them for Benzema’s goal had flown away. He was starting to come to terms with what had happened.

It was beginning to sink in. He had written his name and seared his image into the history of this famous competition for all the wrong reasons. He will not be remembered as a Jerzy Dudek or a Bruce Grobbelaar, a goalkeeper who won the European Cup for Liverpool. He will be remembered as a man who lost it. The European Cup can make heroes of those who play for it and Jamie Carragher spoke for many last week when he said that winning it in 2005 in Istanbul had changed his life. But it can turn those who would be heroes into villains, too, and at the NSC Olimpiyskiy, the events that unfolded in the second half may have changed the life of Karius as well.

Football is a hard game and the performance of Liverpool’s German goalkeeper on Saturday night is likely to have settled the debate once and for all about whether Klopp, who has championed the rehabilitation of Karius, needs to harden his heart and buy a new keeper to sustain Liverpool’s improvement next season. Karius may shortly be looking for a new club. A man’s fall can come very fast and very hard.

‘The goals were quite strange,’ Klopp said afterwards as he tried to downplay the importance of the errors and asked those in the press conference to remember the mistakes they had all made in their lives.

‘I have only had very few words with him. It’s nothing to talk about. I really feel for him. Nobody wants that. The mistakes were obvious. It’s all clear. He knows it, I know it and you know it. And now he has to deal with it and we have to deal with it. It was not his night, obviously. That is clear.’

Karius did not want to talk when he walked through the mixed zone after the match. Nobody blamed him. He is a fine young goalkeeper whose talent suggests he has a good career ahead of him. He will have to fight long and hard, though, to outrun what happened one May night in Kiev.