The Australian cricket team is at risk of being torn apart as a divide opens up between David Warner and a number of other prominent players in the team.

Strike bowlers Mitchell Starc and Josh Hazlewood are livid that they have been associated with the ball-tampering scandal,The Australian reported, with Warner said to be to blame.

It was also reported earlier that both players, and Nathan Lyon, had contacted their agents in the aftermath of the scandal erupting.

Warner, who is in South Africa with his wife Candice and their two children, has reportedly removed himself from the team’s WhatsApp group chat 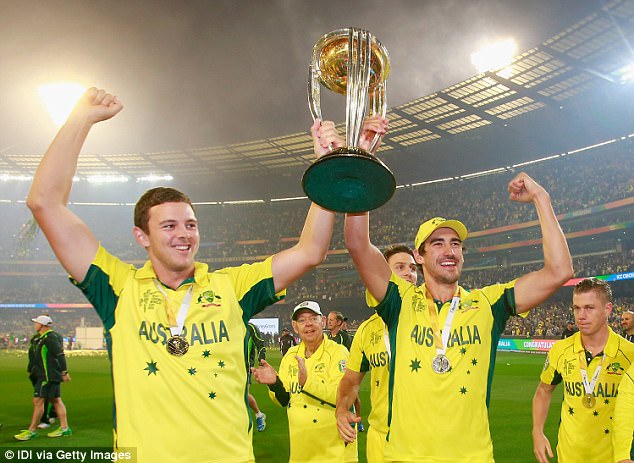 The bowlers believe they were wrongly implicated when Steve Smith said a ‘leadership group’ had hatched the plan.

As the test team flew to Johannesburg for the fourth test against South Africa former captain, Steve Waugh spoke with The Australian about the scandal.

‘The Australian cricket team has always believed it could win in any situation…by playing combative, skillful, fair cricket driven by our pride for the fabled baggy green,’ he said.

He followed it up by saying be believes the current crop of Australian payers ‘believe in this mantra’ but did accept that some have failed the historic team culture. 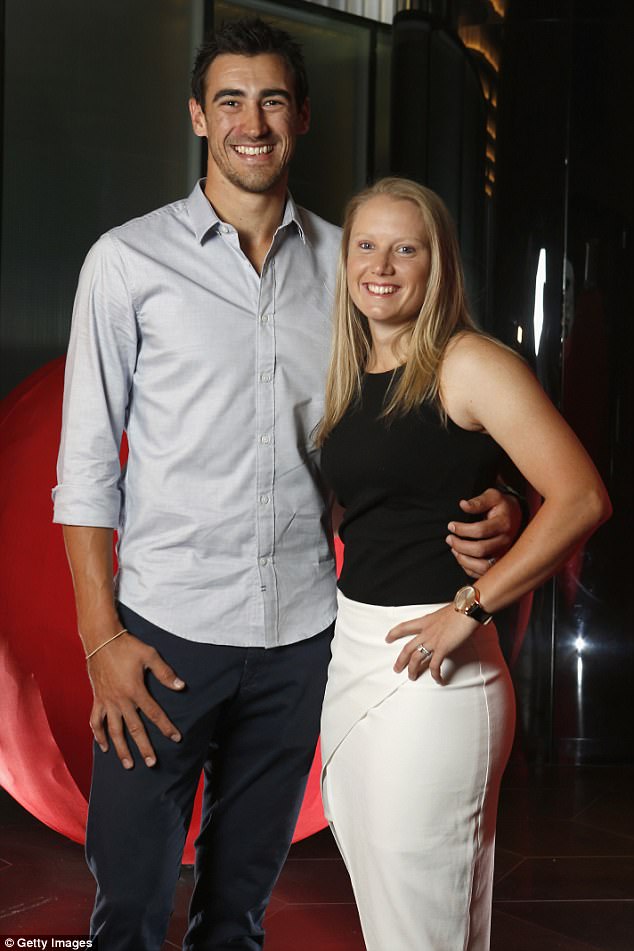 Starc, pictured with Alyssa Healy, is said to be fuming that he has been caught up in the scandal 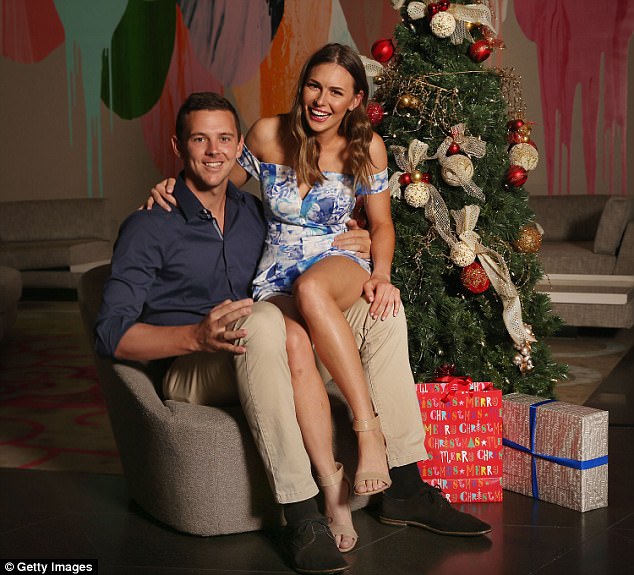 Josh Hazlewood, with his partner Cherina Murphy-Christian, also believes he has wrongly been implicated in the scandal

The replacement players have already started making their way to South Africa to join the test team.

Queensland opening batsman Matthew Renshaw will be taking the spot of Steve Smith in the batting line up.

A decision is still to be made on other replacements with Joe Burns and Travis Head expected to be the replacements for David Warner and Cameron Bancroft.

Warner is reportedly angry at being the main focus of the backlash, feeling he is a ‘scapegoat’.

Cricket Australia chief executive James Sutherland will be briefed by the two man CA investigative team before temporary sanctions will be handed down.

The disgraced Warner has also been accused of ‘going rogue’ by drinking Champagne with non-cricket mates and removing himself from a team WhatsApp group in the wake of the ball-tampering scandal.

In the latest twist, Fox Sports News is reporting that members of the Australian cricket team want Warner removed from their hotel before there’s ‘an incident’ between the star batsman and the rest of the team.

Warner, who is in South Africa with his wife Candice and their two children, has reportedly removed himself from the team’s WhatsApp group chat in a further snub of his teammates.

The Courier Mail is reporting the feud between Warner and some of the playing group reached a new level after his testimony to Cricket Australia officials.

The Courier Mail report states that some players are of the belief that Warner would be willing to throw them all ‘under the bus’ as a means of protecting himself. 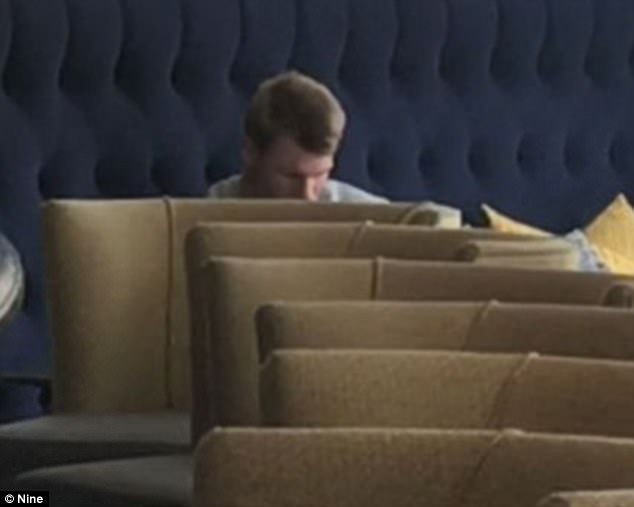 Disgraced Australian vice-captain David Warner has been accused of ‘going rogue’ by drinking Champagne with non-cricket mates. He is pictured sitting alone in the team hotel

Reports also indicate that some players don’t just want Warner removed from the hotel, but from the tour completely.

If true, it is another blow to the credibility of Warner after it was reported by Fairfax Media that he was the likely ‘ring leader’ in the ball tampering plan.

However when Nine News reported they had been told by a source within that bowlers were a part of the ball tampering plot some within the team feared it was Warner who had told the media outlet. 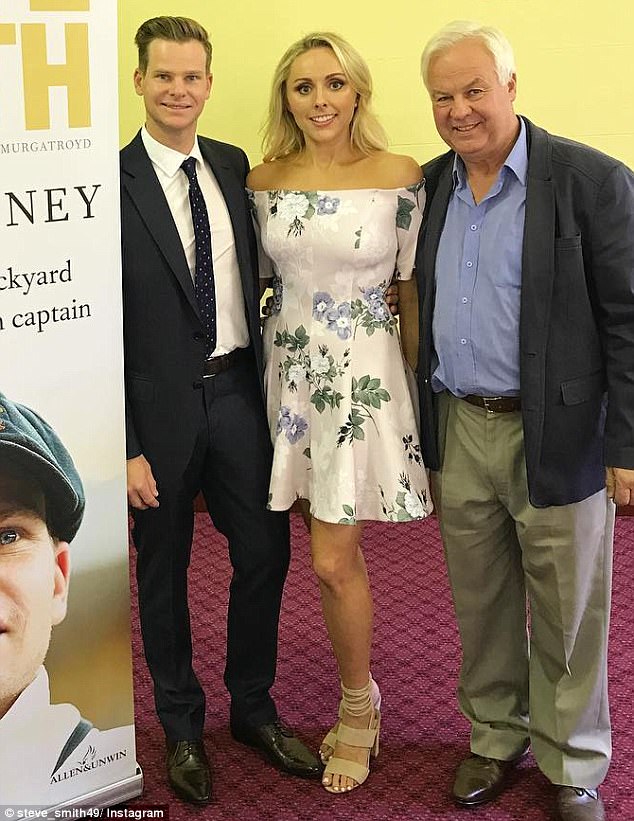 Steve Smith, pictured with his fiancee and his father, took the rap to begin with but sources are suggesting Warner orchestrated the plan to cheat 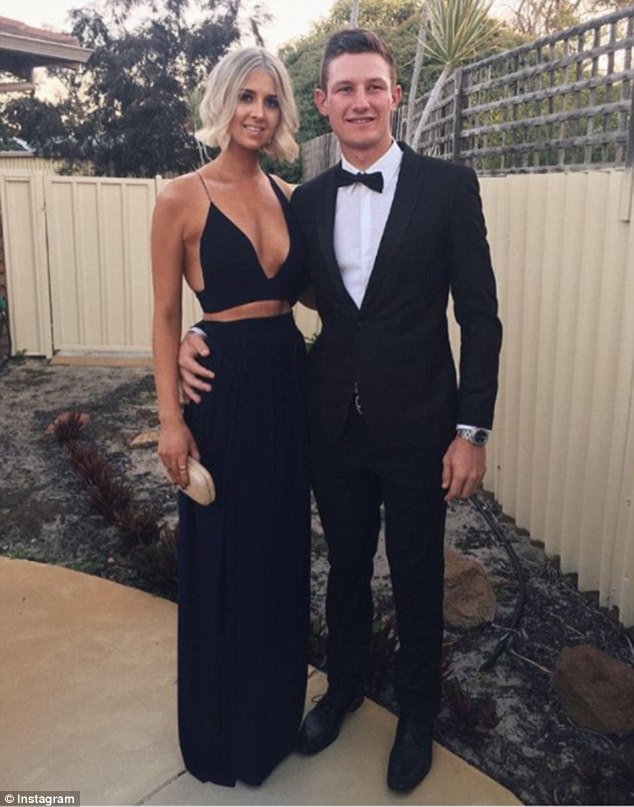 Cameron Bancroft, pictured with his girlfriend, is likely to escape without a ban despite tampering with the ball during the South Africa test

In an interesting twist, The Courier Mail claims CA officials were told that Warner and bowler Cameron Bancroft were the alleged ring leaders of the plot and that Smith was guilty of allowing it to go ahead.

However Fairfax Media reported that sources close to Warner had denied that he was the ring leader.

‘Those in the hierarchy at CA have been made aware of suggestions that the vice-captain was the chief conspirator and that Smith foolishly agreed,’ the Fairfax report read.

Cricket Australia officials, including CEO James Sutherland, are in Cape Town to investigate the incident before handing down a punishment.

An announcement by Cricket Australia about the fate of the two players is expected on Wednesday.

Warner, along with Smith and Bancroft, will be among the first players interviewed, with Smith and Warner in particular expected to be suspended for ‘a stretch of time’, according to the publication.

As the ball-tampering row escalates, Moises Henriques – a long-time teammate of both Smith and Warner – said he believed the skipper wasn’t to blame, and that he was trying to protect Bancroft when he admitted to orchestrating the cheating. 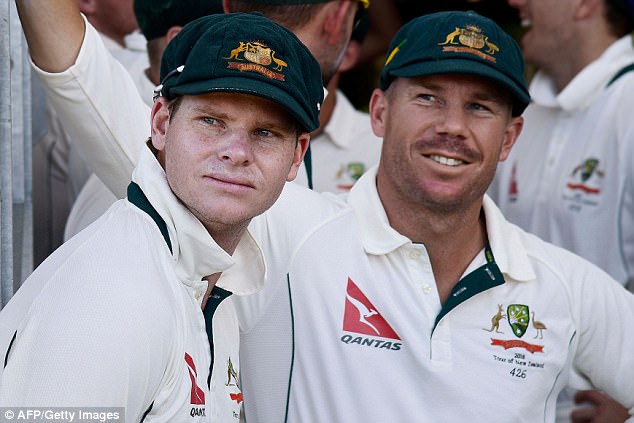 Warner (right), along with Smith (left) and Bancroft, will be among the first players interviewed, with Smith and Warner in particular expected to be suspended for ‘a stretch of time’, according to the publication

The New South Wales star all-rounder said ’10 minutes of panic’ at the end of day’s play led to the explosive press conference which has left Smith’s reputation in tatters.

‘In my uneducated opinion, I dare say there was never a senior players meeting to discuss cheating. Smith made that up to take the heat off a young Cameron Bancroft not realising the outrage that would follow,’ Henriques wrote on Twitter.

Henriques, who has played four Test matches and 11 ODI’s for Australia, added that others players may have known about the plan, but it was unlikely it was contrived by the leadership group.

‘Not saying no one was aware of Cameron doing it, just highly doubt there was a ”senior players meeting” to decide to cheat,’ he wrote.

‘I think it was the captain attempting to protect a young player. They had 10 mins of panic between end of play & press conference.’ 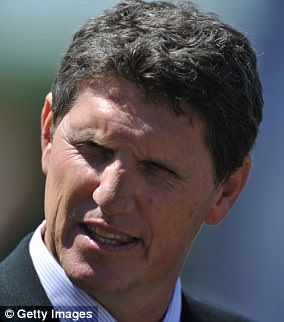 De Villiers has been working for a broadcaster in South Africa for the Test series and claimed he knew something untoward could have been going on by how early the tourists were getting the ball to reverse swing.

Ultimately his suspicions were proved correct when, after searching for an hour-and-a-half, the cameras spotted Cameron Bancroft rubbing sticky yellow tape on the ball in an attempt to alter its condition.

‘I said earlier on, that if they could get reverse swing in the 26th, 27th, 28th over then they are doing something different from what everyone else does,’ de Villiers told RSN Radio on Monday.

‘We actually said to our cameramen, ”go out (and) have a look, boys. They’re using something”.

‘They searched for an hour-and-a-half until they saw something and then they started following Bancroft and they actually caught him out at the end.

‘It’s impossible for the ball to get altered like that on cricket wickets where we knew there was grass on, not a Pakistani wicket where there’s cracks every centimetre.

A damning graphic showed how the ball reversed in Cape Town while Bancroft tampered with the ball but stopped when his actions were exposed.