Living by a gym makes you more likely to be slim

People who live near a gym or a swimming pool are slimmer, researchers have found.

The more fitness facilities or playing fields close to your home – and the further you are from the nearest takeaway – the healthier you are likely to be.

Convenience really is key to keeping fit, the research suggests.

The study, which tracked 400,000 people across Britain, found those with several sports centres or other facilities within a kilometre (0.6miles) of their home were thinner, lighter and had less fat in their body.

Living near a gym increases your chances of staying fit according to a study. Those who live within 0.6 miles of a gym were thinner than those that lived further away

And if they were further from a fast food outlet they were also in better shape.

Some 68 per cent of men and 58 per cent of women in Britain are now overweight – defined as having body mass index of more than 25.

Experts predict these figures will explode in the years to come, creating an epidemic of diabetes, heart disease and cancer.

Part of the problem is that most people live sedentary lives – with official statistics showing 45 per cent of all over-16s do not even manage a 10-minute walk once a month.

Kate Mason, of the London School of Hygiene & Tropical Medicine, said: ‘Urbanisation is recognised as a key driver of obesity, and certain features of neighbourhoods are likely to add to this, including a prevalence of fast food outlets and whether we have access to physical activity facilities.’

The team assessed data from adults aged 40 to 70 from around the UK, matching their health measurements to their address, and assessing how many fitness facilities and fast food outlets were in the vicinity. 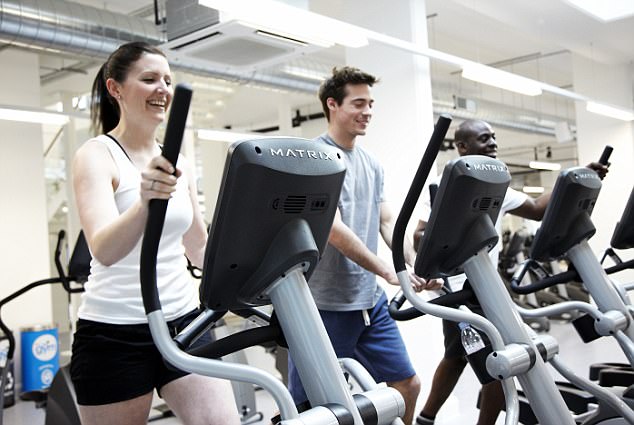 On average, there was just one physical activity facility within 1km of people’s homes, but a third of participants had no facilities within this distance.

People who had better access to physical activity facilities were less overweight than those who had access to fewer facilities.

Those with at least six facilities nearby had a 1.22cm smaller waist circumference, a body mass index of 0.57 points lower, and a body fat percentage that was 0.81 per cent lower, on average.

Compared with people living fewer than 0.5 kilometres from a fast food outlet, those living at least 2 kilometres (1.2milies) away had 0.26cm smaller waist circumference.

‘It would also be important to make sure new physical activity facilities are affordable, especially when they are located in lower-income areas.’