A team of architects from Ukraine took top prize at a prestigious competition with a concept for a ‘living skyscraper’ shaped out of a grove of genetically modified trees.

The idea – which is only a  theoretical concept at the moment -beat out nearly 500 other submissions from around the world and earned the team a $5,000 cash prize.

And while trees have never been used to develop anything on the scale of a skyscraper, the idea isn’t all science fiction. Designers have already successfully grown trees into tables, chairs, lamps and bridges.

The ‘Living Skyscraper for New York City,’ a high-rise made from specially modified trees, beat out nearly 500 other submissions to win first place and $5,000 in the evolo Skyscraper Competition

The eVolo Skyscraper Competition started in 2006 to recognize those who use architecture in creative ways to ‘challenge the way we understand vertical architecture and its relationship with the natural and built environments.’

It aims to address the needs of the city’s growing population while combating the decline in green spaces and the impact of construction on the environment.

A group of genetically modified hardwood trees would be planted in specially treated soil, with branches grafted at different levels to form a network structure. 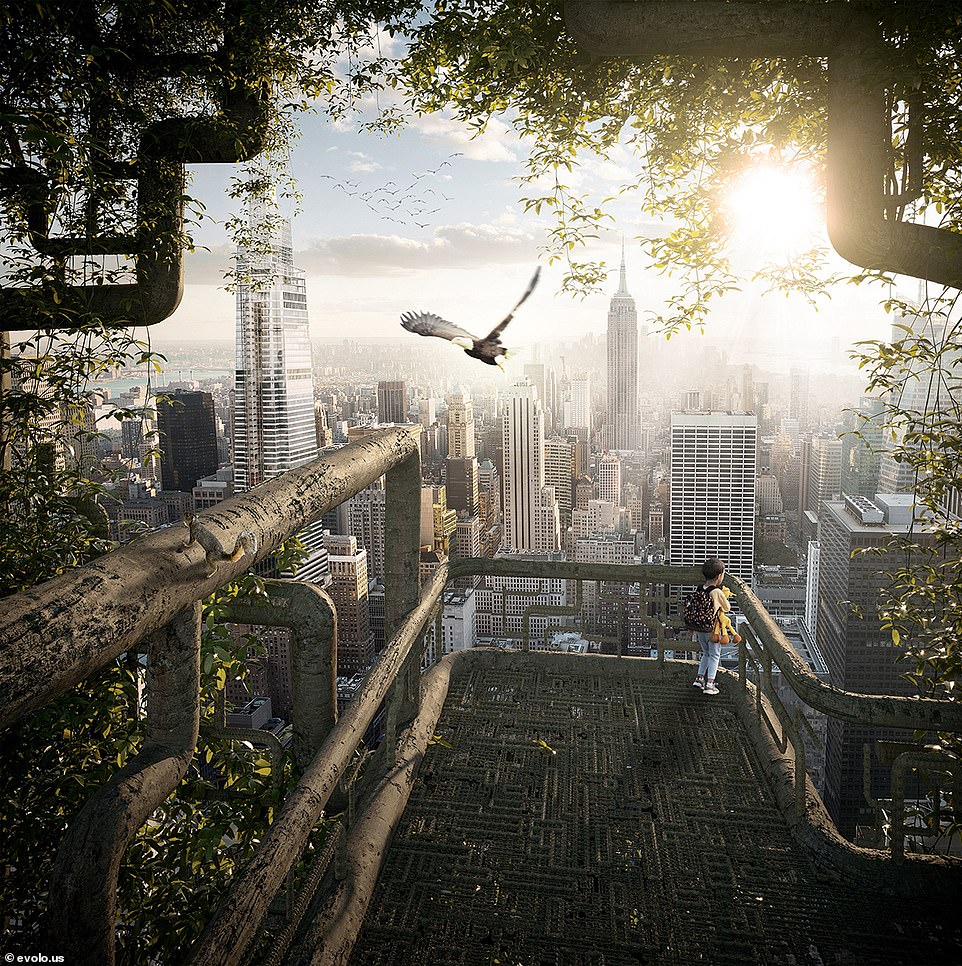 A rendering of the view from the ‘Living Skyscraper of New York.’ The eco-friendly concept would address the needs of the city’s growing population while combating the decline in green spaces and the impact of construction on the environment 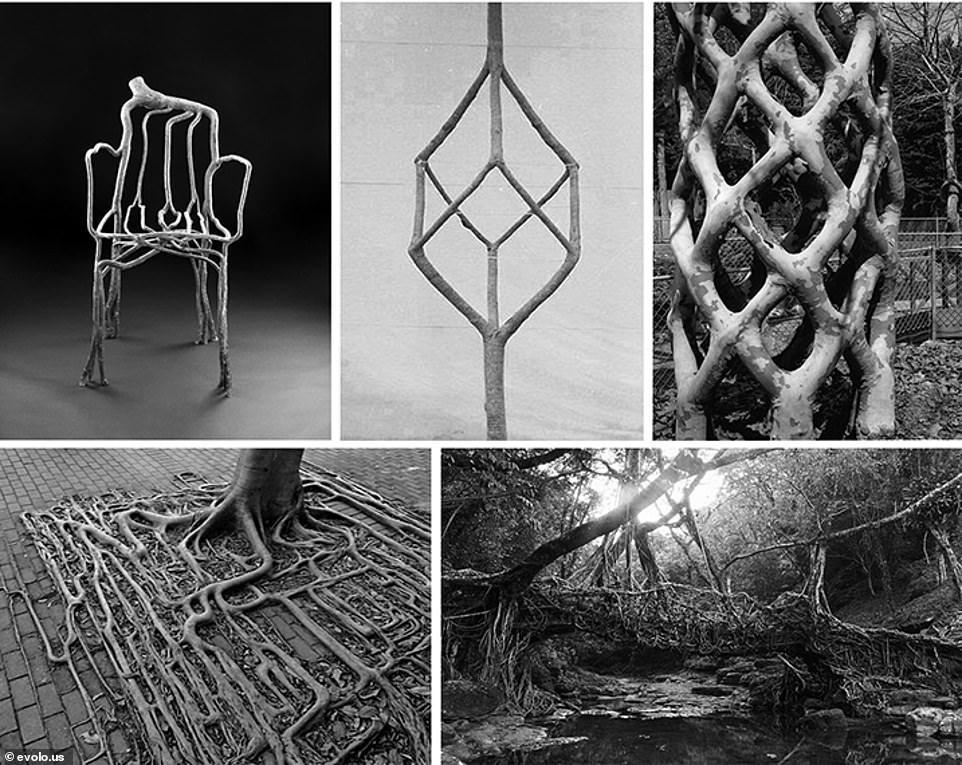 While the concept for a skyscraper made from a living trees is still just theoretical, bridges, chairs and other objects are already being grown from pre-programmed trees.

As the trees grow, they’re shaped to form the frame of the skyscraper, with smaller branches molded into walls and rooms.

‘We actually program the tree and ‘tell’ it how to grow,’ said team member Andrii Lesyuk.

The branches of nearby trees would be grafted at different levels to form a network structure that strengthens the massive tower. 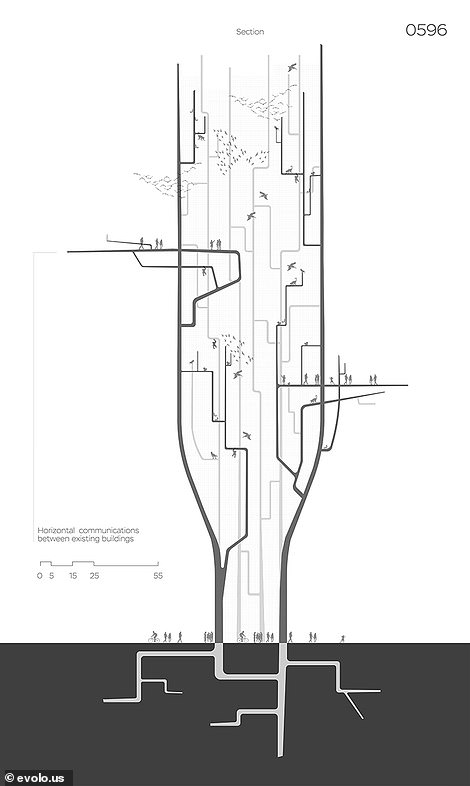 As the trees grow, they’re shaped to form the frame of the skyscraper, with smaller branches molded into walls and rooms

As an organic structure, it wouldn’t require building materials, and would be sustained simply by water and fertilizers.

‘We believe that by integrating genetically modified trees during the stage of their growth and development into architecture, we can restore the balance between the digitalized megacities and the Earth’s resources, which are gradually depleted,’ the team explained in their submission.

‘A skyscraper tree is a separate living organism with its own root system, irrigation, care mechanisms, and features of development focused on its adaptation to use in architecture.’

Lesyuk said his father gave him the idea when he mentioned a documentary about paulownia trees, one of the fastest-growing species on earth: They can grow three feet a year and reach a full height of 30 to 40 feet within a decade.

Half the weight of traditional timber, paulownia wood is known as the ‘aluminum of timber,’ Lesyuk said, ‘because it’s naturally resistant to fire, salt water, termites, decay and rot.’

‘I began thinking that if we could accelerate the growth of these trees, they could reach an even greater height and we could mold them into any shape,’ he told Zaxid.Net. ‘With the help of special guideway systems, we can even grow a skyscraper.’

While the concept is still just theoretical, Lesyuk said bridges, chairs and other objects are already being grown from pre-programmed trees.

‘It’s really quite realistic for the near future,’ he added. ‘Just imagine that scientists can invent a tree that will grow not five times faster than a paulownia, but 30 to 40 times faster! Then you can grow an entire building in 15 years.’

Second place in the competition went to Israeli architects Amit Deutch, Roni Dominitz and Tamar Kerber, whose Lluvioso Skyscraper for Mexico City’s has a 2,000-foot ‘canopy’ that would spread over the entire neighborhood and collect rainwater to refill the city’s dangerously low groundwater supply and reduce damage from flooding. (‘Lluvioso’ is Spanish for ‘rainy.’)

‘As the Aztecs learned to adapt to their environment we hoped to realize a proposal that co-lives with nature and doesn’t seek to tame it,’ the team said. 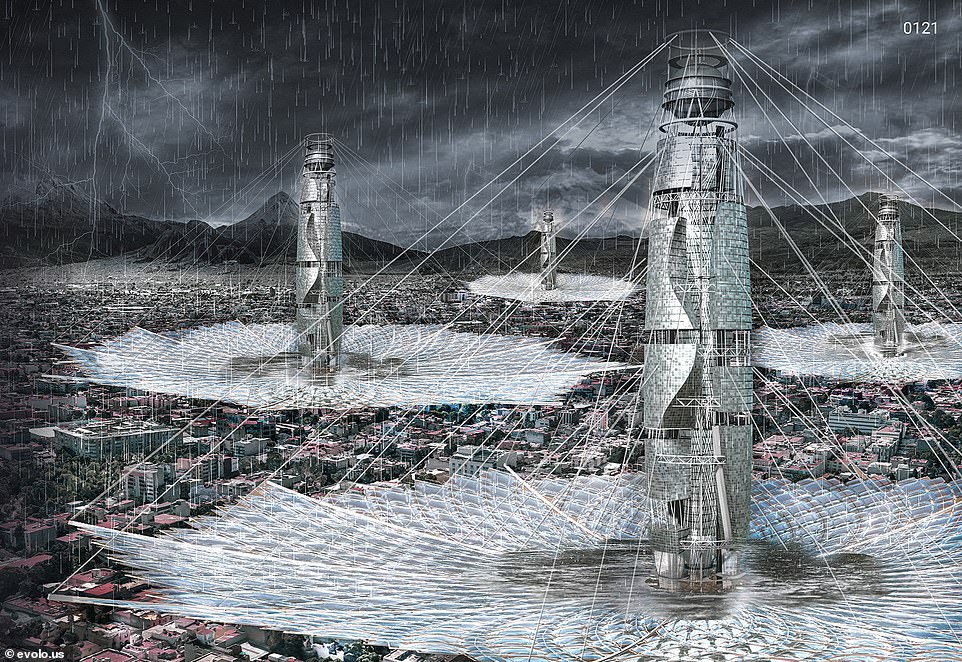 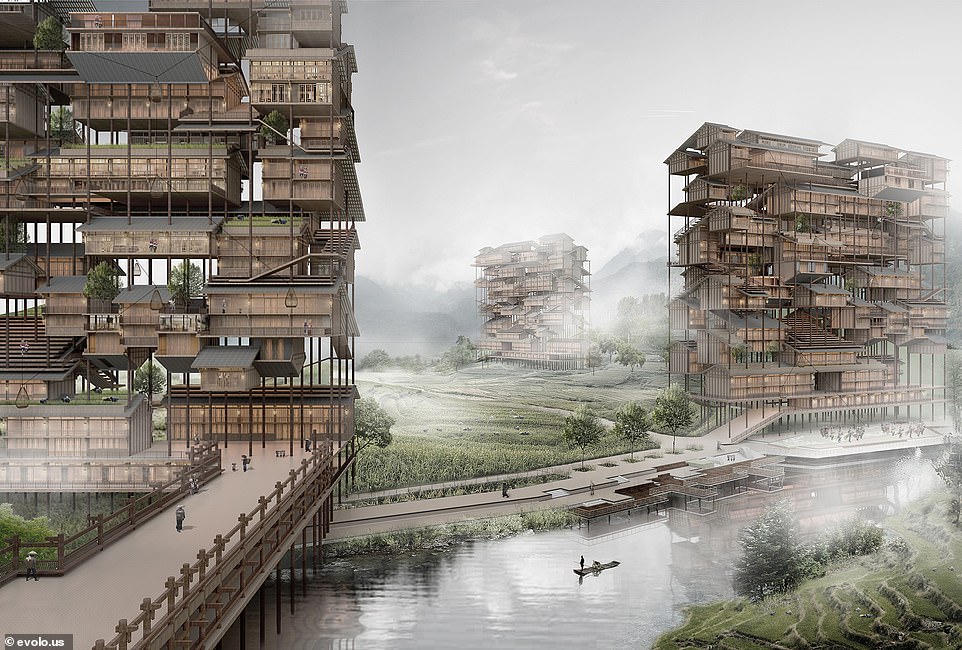 Hmong Skyscraper, which incorporates the traditional homes of the Hmong people of China as modular units that can be added to an interconnected grid

Xiangshu Kong, Xiaoyong Zhang, and Mingsong Sun of China took third place with their Hmong Skyscraper, which incorporates the traditional homes of the Hmong people as modular units that can be added to an interconnected grid.

The more than nine million Hmong living in southern China have their own language, art and architecture.

But as many are being relocated to suburban areas to provide a better quality of life, the transition has been difficult.

‘Many Hmong cultural customs have disappeared, and even many Hmong people’s houses have been demolished or will be,’ the team said.

‘We tried our best to keep farmers’ memory and lifestyle of their original hometown, and at the same time let them enjoy the convenience of modern urbanization.’