Pay attention, class. Some of you may need to write this down. A headmistress at a leading girls’ school has said too many women ‘infantilise’ their husbands by leaving to-do lists around the house.

Vicky Bingham, who works at South Hampstead High, criticised mothers for ‘micro-managing’ housework, saying it perpetuates the myth that their husbands are incapable of carrying out these tasks.

‘I’ve known friends leave instructions for their husbands on “looking after the children” when they have been away. I’ve listened to them lament having to micro-manage decisions about coats, socks, carrot batons, baths and homework, on top of very demanding jobs.

‘Managing duties in the home and remembering key family dates should be a shared responsibility.’

I wonder if Vicky Bingham is married, or even lives with a man. It’s not possible, is it, that she has a great big hunk of male concrete round her neck, dragging her down? Because if she had, she wouldn’t spout this rubbish.

We all know what ‘should’ be the case in inter-gender relationships. None of us has a burning desire to make endless lists or be constantly in charge, alert to missed birthdays and carrot batons left unchewed to go rancid.

We don’t enjoy having to phone British Gas to complain about the wildly overestimated reading; we do so because if we ask a man to do it, we have to remind him six times. Oh, and provide the phone number and the reference number on a piece of paper, hand him the phone, make everything quiet while he does it (‘That tumble dryer’s a bit loud’), and listen in to the exchange in case of mistakes (‘What’s our postcode?’).

And finally we have to hear the idiot we donated our last child-bearing years to say, in a tiny voice, ‘No, that’s OK. Probably just a misunderstanding’ when we would have ripped the bloody customer service person’s head off.

Men being unable to carry out basic tasks in the home is not a ‘myth’, Ms Bingham, see me in my office! It’s a fact! 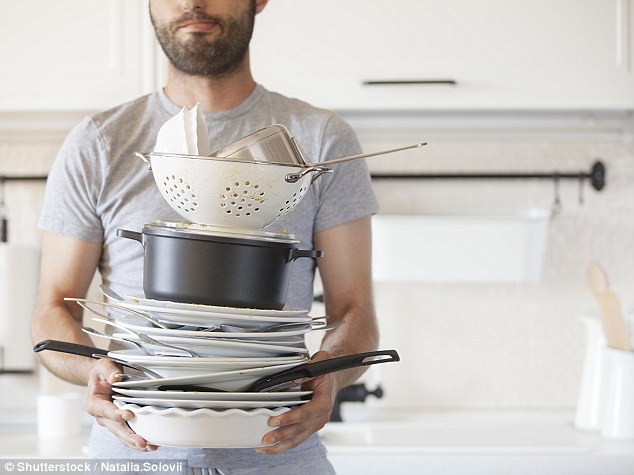 I wonder if Vicky Bingham is married, or even lives with a man (stock image)

We not only have to write lists, the lists have to have a level of detail not seen outside of a Space Shuttle instruction manual.

Despite co-caring for a cat with me for seven painfully long years, my ex-husband still had no idea what brand of special, diet biscuits to buy while I was working in Paris.

Unless I Googled a photo of the pack, pasted it on his shopping list, with arrows and notes in the margin and left the right amount of cash and a printed map to the vet, he just bought Whiskas from Tesco Express. ‘She can’t eat that! It will KILL HER!’

No matter what Miss Bossyboots says, men believe that they deservedly exist on a higher plane to the poor women they depend on. They’re on a different plane, all right.

Off on a mini-break to New York, having delegated to Him the task of getting us to Heathrow (given I’d arranged the hotel, packed his case and booked a town car to pick us up at JFK), 15 minutes after we were due to leave he mumbled, as if his mind were occupied solving the origin of wormholes: ‘Which airport is it again? Gatwick?’ 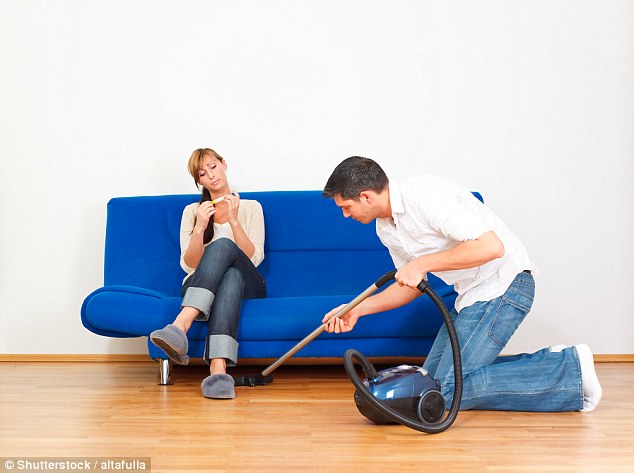 It’s not possible, is it, that she has a great big hunk of male concrete round her neck, dragging her down? Because if she had, she wouldn’t spout this rubbish (stock image)

Gah! And then, when we landed back home, I was told off for not having made a note of where his car was parked!

You see, Ms Bingham. New men were helicoptered to such a degree by their mothers they now believe it’s normal for women to buzz around them and do everything. And so, as surely as dolphins lost feet when they crawled into the sea, men have lost the skills their grandfathers had. You know, like flying Lancaster bombers.

I asked my last boyfriend to mow my lawn. I thought, being quite old, he would have come across a lawn and a lawnmower before. Oh dear me no.

Three hours later, he was still puzzling while chain-smoking (near a petrol can! Detention!) about how to start the bloody thing. ‘You press the bubble three times first.’ ‘What bubble?’ ‘To get the petrol going. My God, you’ve watched Formula 1 enough times!’

I should have written it all down.