Lizzo’s teeny tiny bag not only launched countless memes and its own Twitter account, but also a hilarious Photoshop challenge.

The vivacious singer, 31, put a call out to her 1.2 million followers, asking them: ‘Can someone [Photoshop] the bag big and me small? I’m tryna see something’.

Ask and you shall receive, as her devoted fans rushed to produce edited versions involving the miniature Valentino purse.

Infamous: Lizzo’s Valentino ruffled gown and miniature white purse outfit was undoubtedly the most talked about moment of the American Music Awards 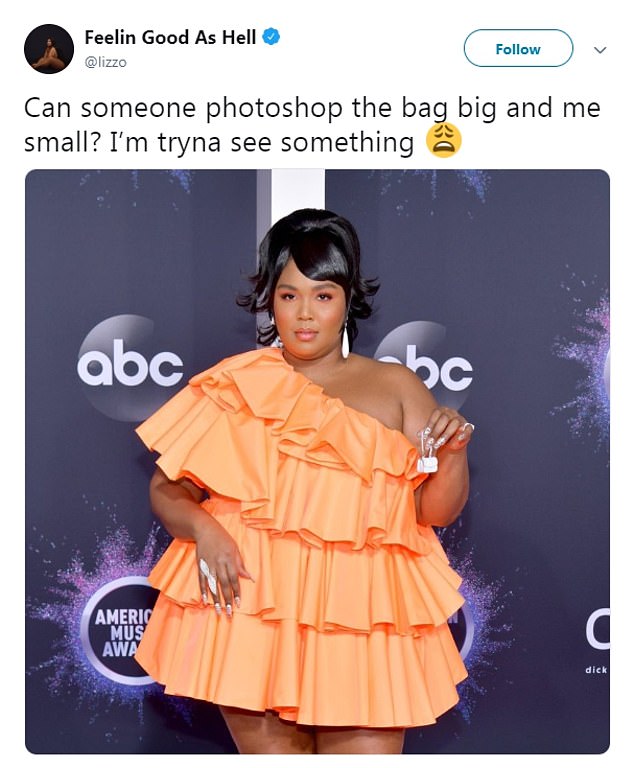 ‘I got you,’ he wrote, as he shared both an animated clip and an image of Lizzo’s bag carrying her around on the red carpet.

His efforts quickly racked up over 30,000 likes.

The widely-talked-about accessory, which Lizzo told a reporter contained ‘tampons, a flask of tequila and condoms’, was given digital makeovers by dozens of Twitter users. 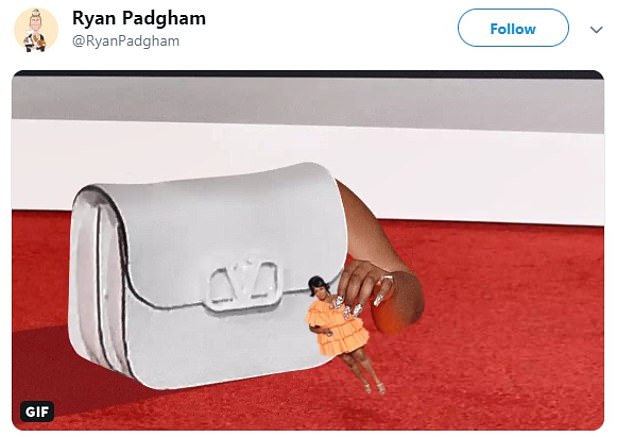 Viral: A graphic designer named Ryan Padgham created a short clip of Lizzo’s bag carrying her on the red carpet, receiving over 30,000 likes 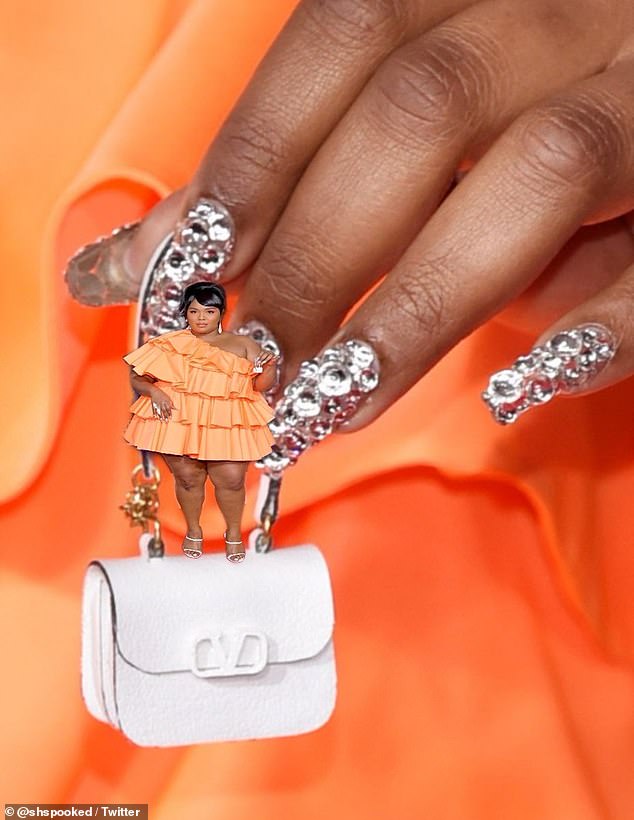 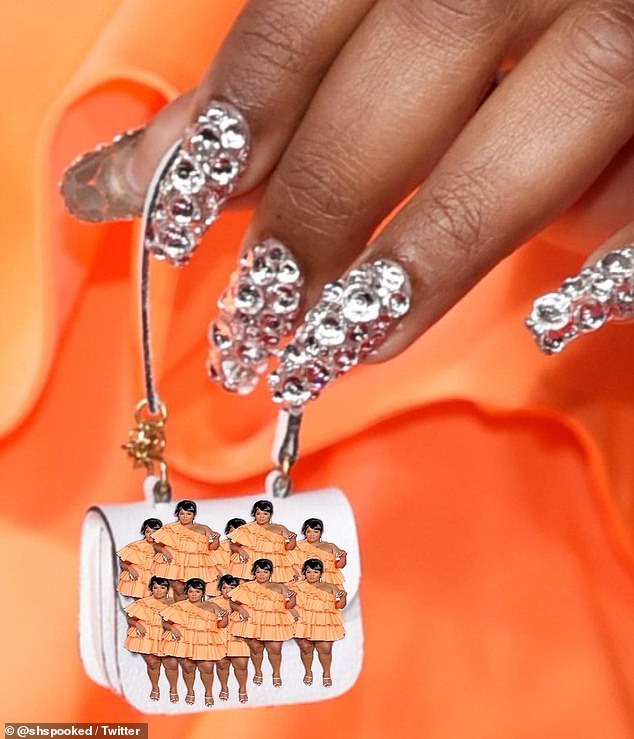 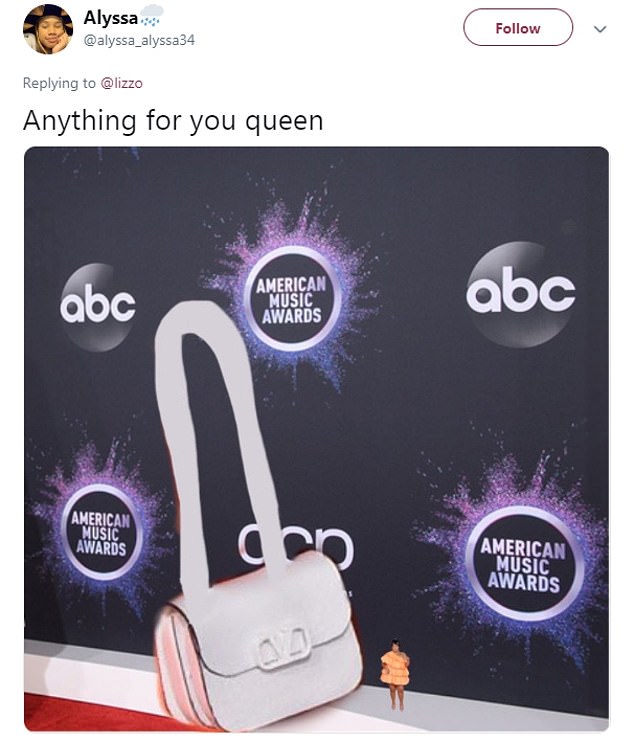 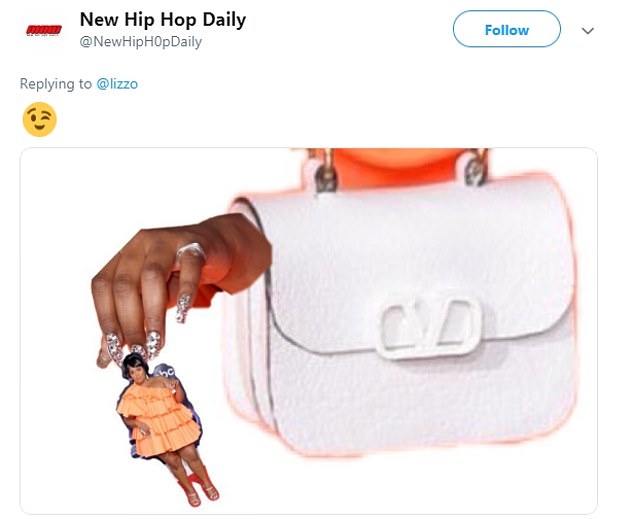 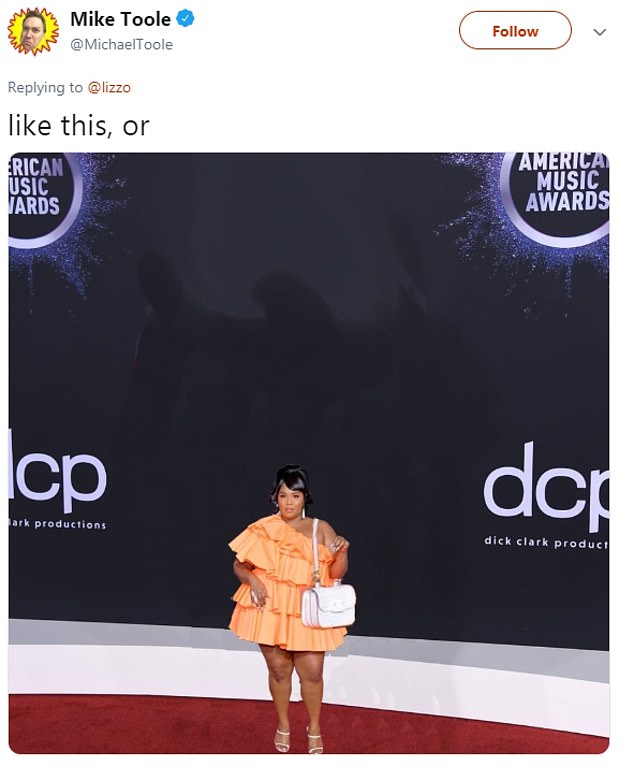 Beyond the bag, Lizzo’s crystal nails were also the star of the show. The look was created by Eri Ishizu, the go-to nail artist of J Lo, Laverne Cox and Anne Hathaway.

The beauty moment was created using Swarovski Crystals, to match the ultra luxe Lorraine Schwartz jewels that Lizzo was wearing.

The blinging nail look was taking center stage in many of the Photoshopped pictures.

The micro bag has been trending for a while, thanks to designers like Jacquemus.

While dissecting Lizzo’s look, Vogue wrote: ‘The cheeky bag took the micro designer bag trend to the next level. (It could fit a bread crumb, a single mint – and maybe a penny.’ 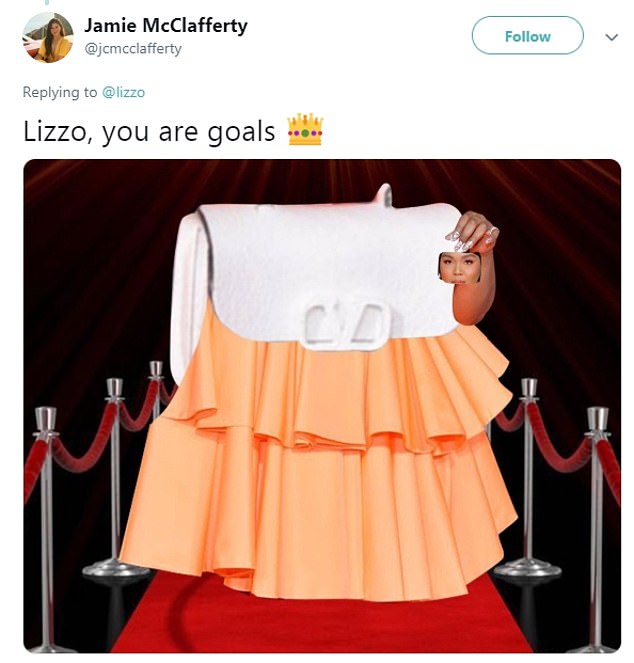 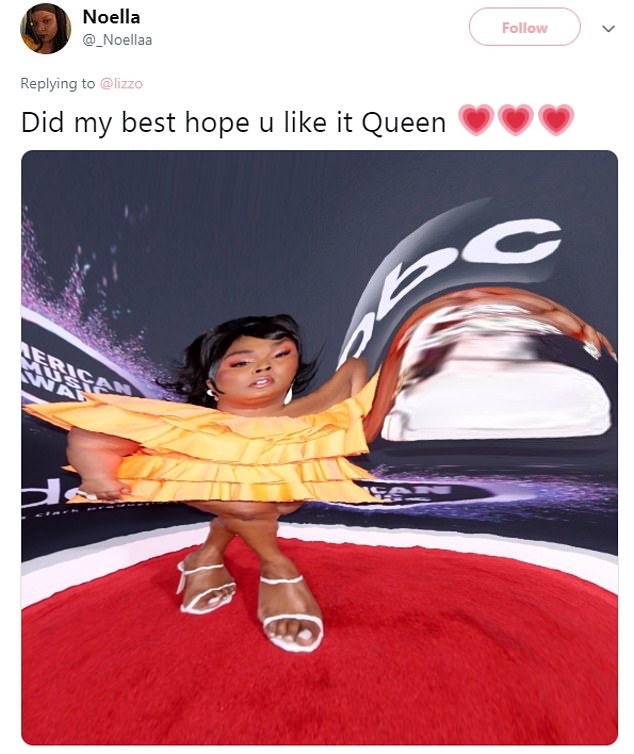 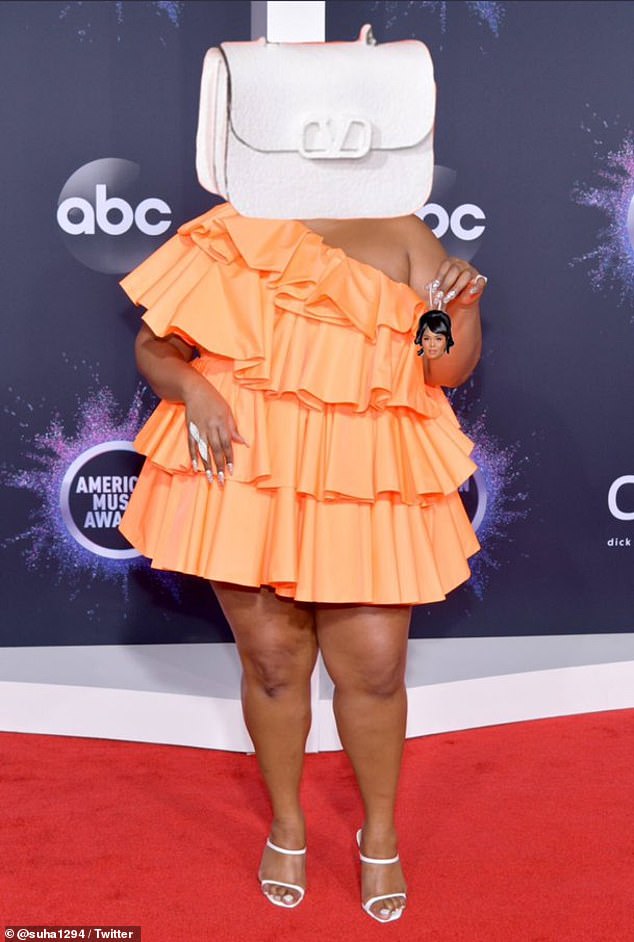 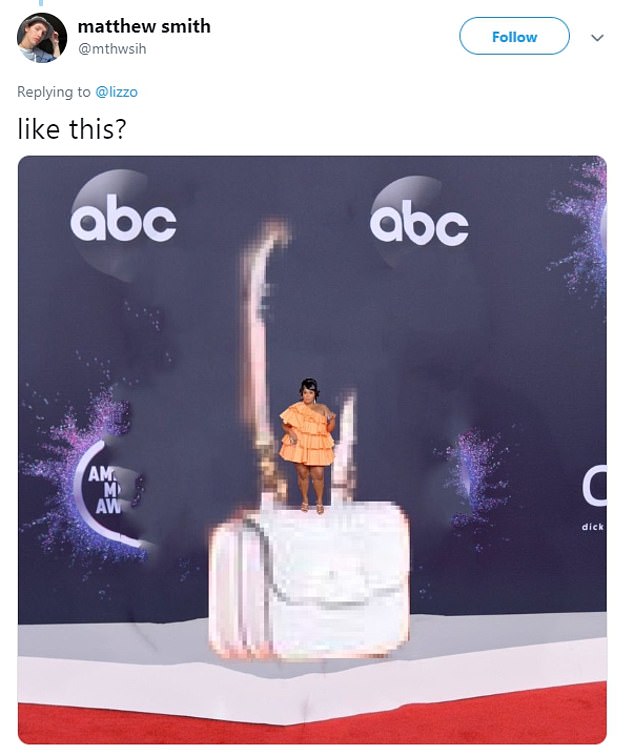 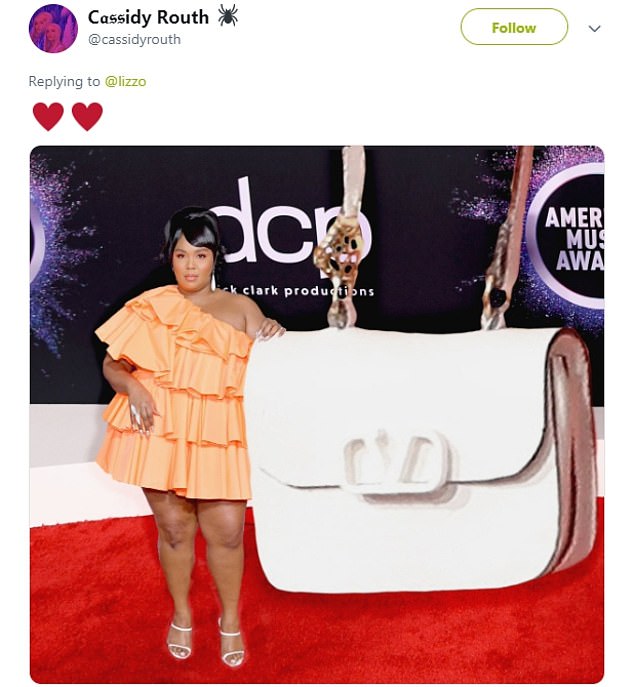 Design pros: Dozens of budding graphic designers rushed to grant Lizzo’s wish of having the image Photoshopped to show her looking smaller than the bag

Opting for a more colorful description, when uploading her outfit photo to Instagram, Lizzo said her blink-and-you’ll-miss-it handbag was ‘just big enough for my f**ks to give’.

The outspoken star also joked that she was wearing custom ‘Valentin-ho.’

Her attitude on the red carpet instantly inspired an onslaught of memes, with users saying the bag contained everything from their life savings to their self esteem.

‘We truly don’t deserve Lizzo, or her tiny purse,’ a user said. 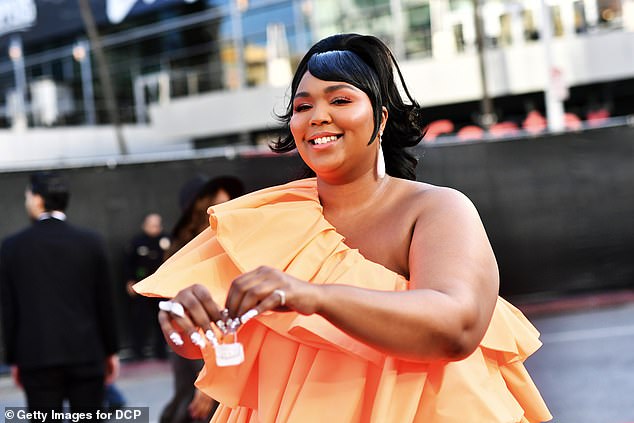 No f**ks given: The Truth Hurts performer, pictured, told reporters that the Valentino bag contained tampons, condoms and a flask of tequila 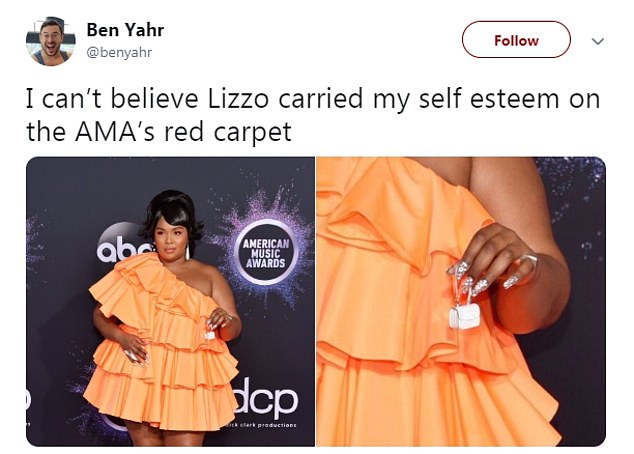 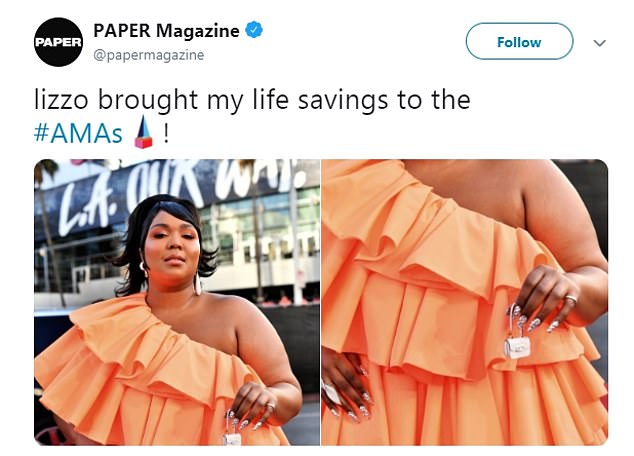 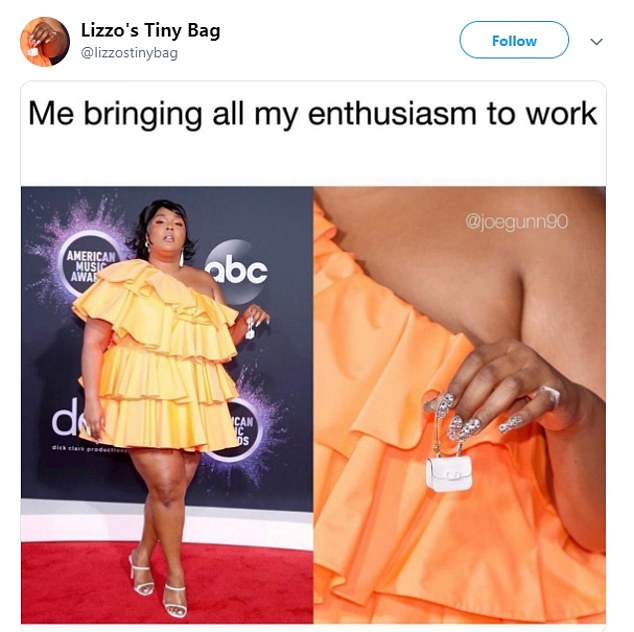 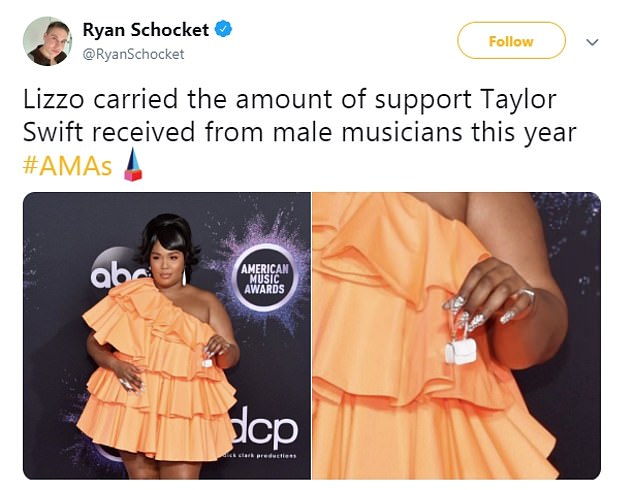 It’s not the first time one of the musician’s belongings has become a star in their own right.

An Instagram page for her flute has already amassed 300,000 followers – not to mention a a highly-sought after ‘verified’ blue badge.

The social media account’s name ‘Sasha Be Fluting’ is a reference to the Detroit-born performer’s own handle, ‘Lizzo Be Eating’.