Lizzo turned heads as she stepped onto the stage at Madison Square Garden in New York City to give a memorable performance for her Special Tour.

The Truth Hurts singer, 34, donned a colorful bodysuit as she sang a number of her hit songs for her cheering fans in the large venue.

The talented star kicked off her North American tour last month on September 23 in Florida, and will conclude in sunny Los Angeles mid-November.

Special tour: Lizzo, 34, donned an eye-catching ensemble as she performed on stage at Madison Square Garden in New York City on Sunday for her Special Tour

The performer opted for an eye-catching ensemble for her stage performance, and donned a nude-colored body suit with neon yellow patterns that sparkled under the bright stage lights.

The star paired the colorful outfit with neon yellow combat boots to complete her concert look.

Her brunette hair was parted in the middle, and flowed past her shoulders in stylish waves. Purple highlights were added throughout her long locks.

To accessorize her look, the Boys hitmaker added a pair of silver-hooped earrings but chose to not add any other pieces of jewelry. 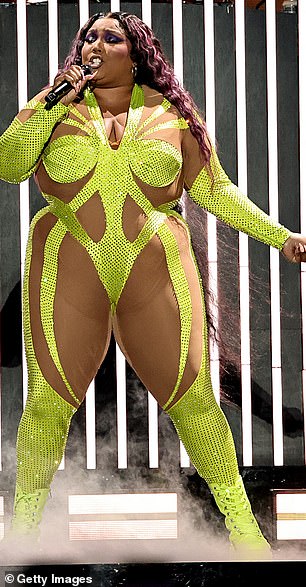 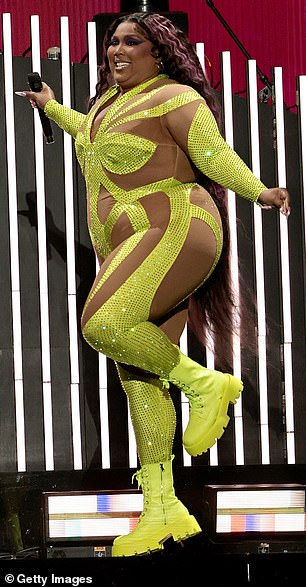 Stylish: The Truth Hurts hitmaker exuded confidence as she performed her hit songs on stage 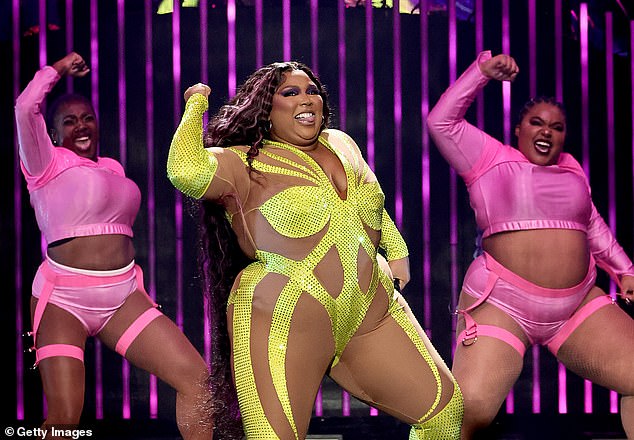 Talented: The star kicked off her North American Special Tour last month in September in Florida

For her makeup look, Lizzo added an additional pop of color with a heavy layer of purple eyeshadow which she paired with a nude-colored lipstick.

The Grammy award-winning singer was all smiles and appeared to be having a blast as she sang her heart on stage while also showcasing her dance skills.

The Special Tour has been promoting Lizzo’s recent fourth studio album titled, Special, which was officially released over the summer in July.

During an interview on the Zane Lowe podcast, the talented singer opened up about the Billboard charting album.

‘I think love is the heart of this album. I think everything I’ve been doing prior to Special was in pursuit of love,’ she explained. 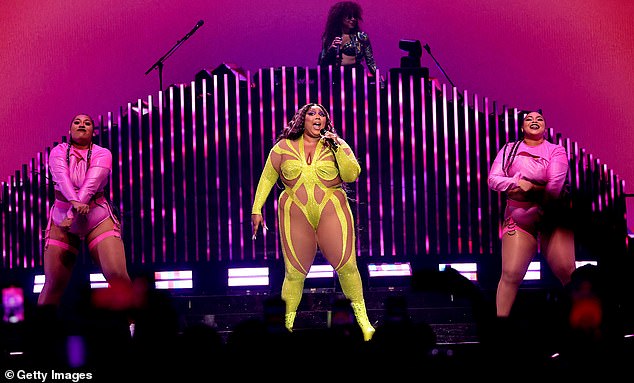 Exciting night: Along with Lizzo, her backup dancers also opted for a pop of color in hot pink ensembles 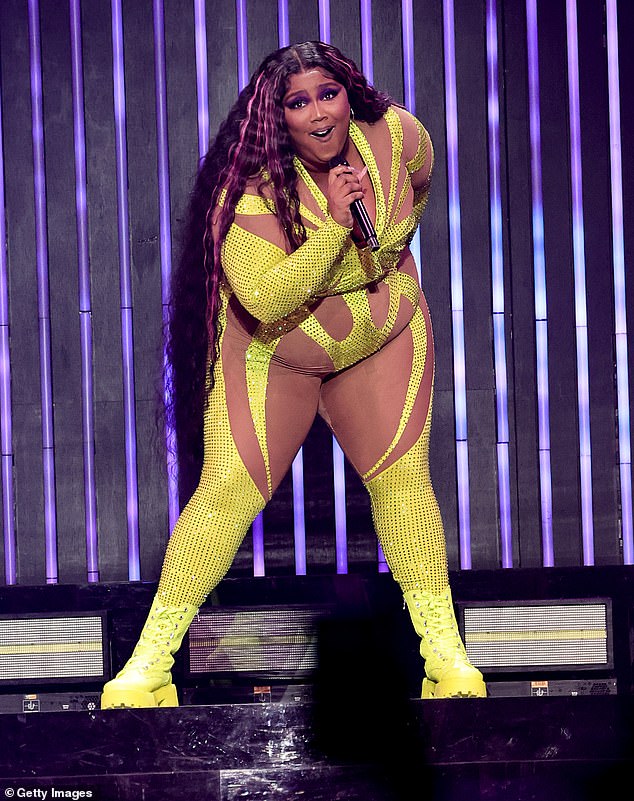 Having a blast: The Grammy award-winning singer will end her tour on November 19 in Los Angeles 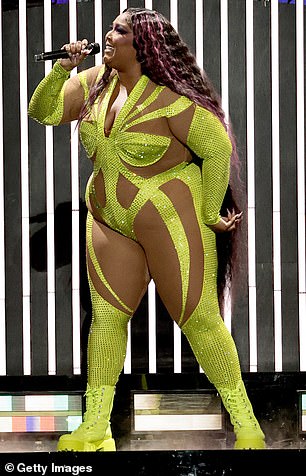 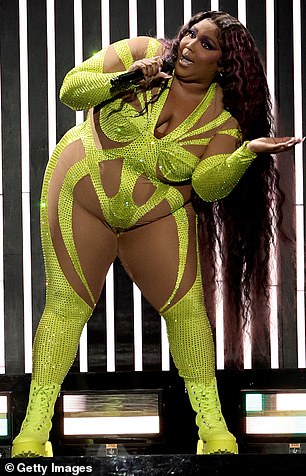 Special guest: A guest performer that is currently on tour with Lizzo is American rapper, Latto

In a recent interview with Elle UK, the award winner revealed that her early inspiration to pursue working in the music industry was due to Destiny’s Child.

‘Growing up in Houston, the impact that Destiny’s Child had on me making a decision to become an artist was incredible, mostly because I felt like we were so close to it,’ Lizzo explained to the publication.

The star also reminisced on a time she met the talented group when she was younger. ‘They had an album-signing event at a Wal-Mart and I skipped school to go see them.’ 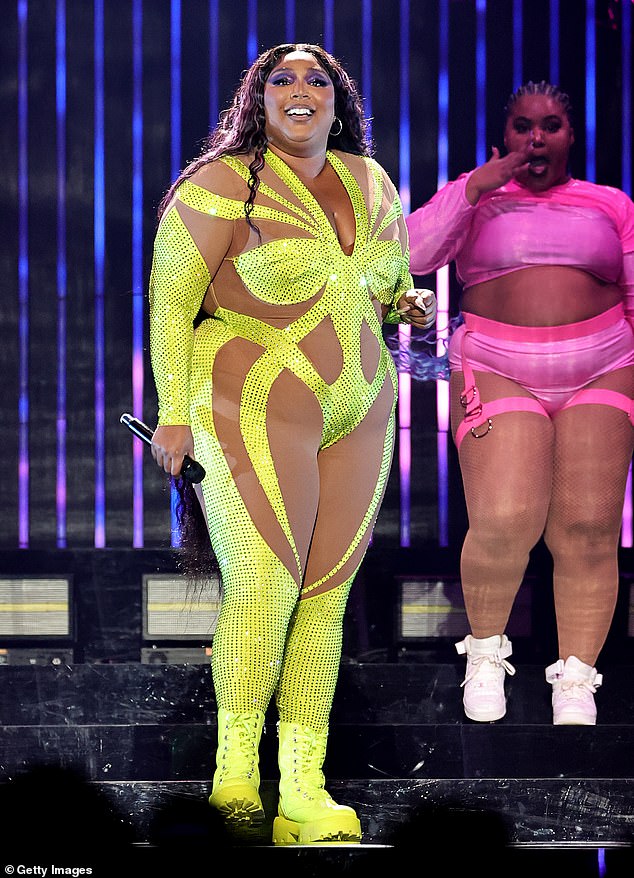 Big smile: Lizzo appeared to be more than thrilled to perform songs and spend time with her fans during her concert on Sunday 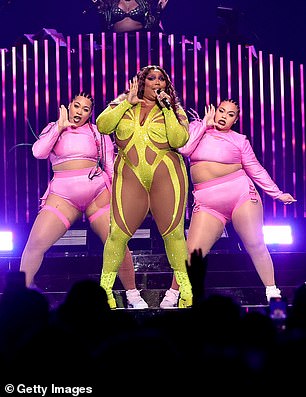 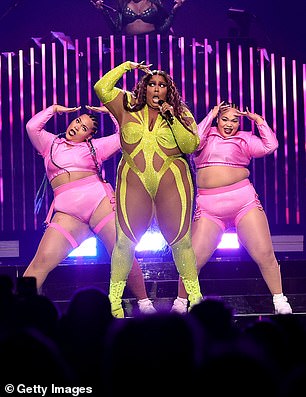 Early inspirations: During an interview with Elle UK, Lizzo expressed that Destiny’s Child inspired her to pursue a career in the music industry

The performer recently made history earlier this week on Tuesday when performing a concert in Washington D.C. as part of her Special Tour.

While she was on stage in a shimmering ensemble, a representative walked up to the singer and handed her a 200-year-old crystal flute from the Library of Congress. The musical instrument was previously owned by James Madison, the fourth president of The United States.

Lizzo was the first person to have the opportunity to play the instrument, and shared the monumental moment on her Instagram.

‘YALL.. THE LIBRARY OF CONGRESS LET ME PLAY THEIR HISTORIC 200 YEAR OLD CRYSTAL FLUTE ON STAGE TONIGHT— NO ONE HAS EVER HEARD WHAT IT SOUNDS LIKE… NOW YOU DO,’ she typed in the caption.

The Special Tour is currently in high gear, and will conclude with a show-stopping concert on November 19 in Los Angeles. 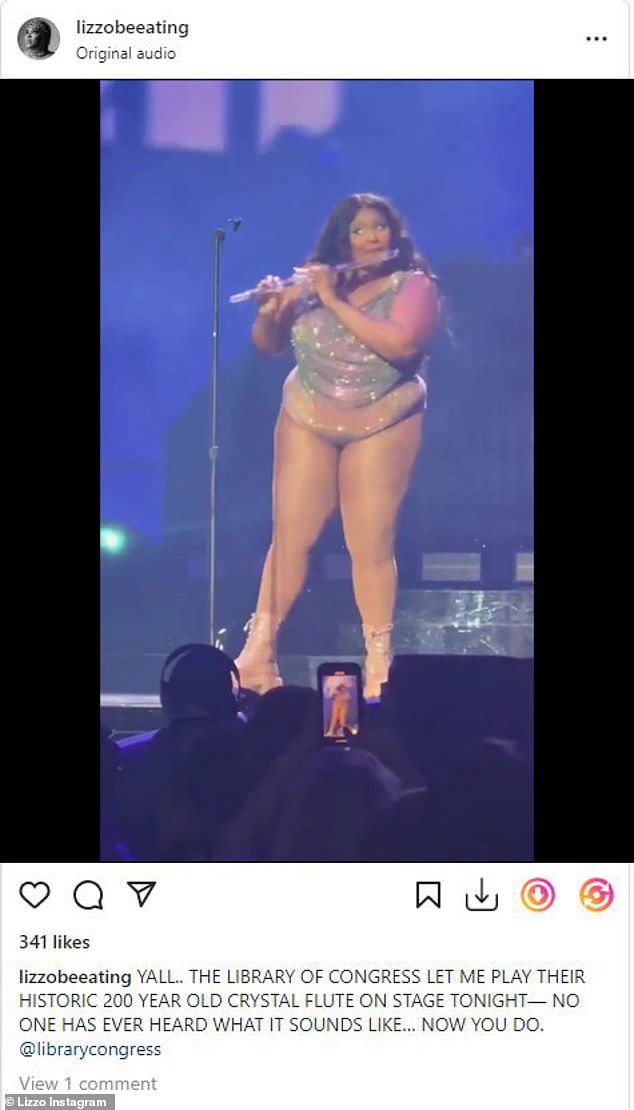 Big moment: During a concert performance in Washington D.C., Lizzo had the chance to play a flute from the Library of Congress which was previously owned by James Madison 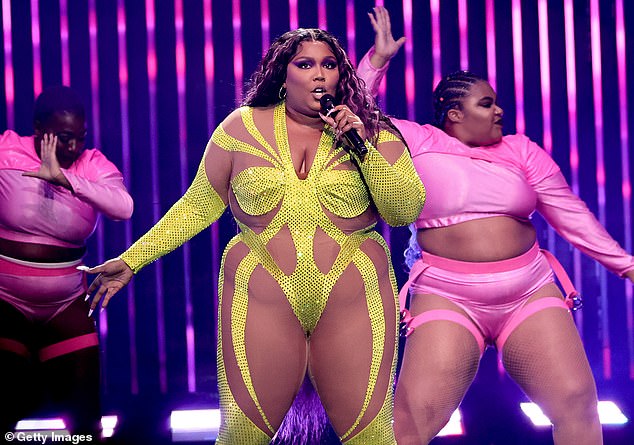 Song list: The Truth Hurts hitmaker performed a number of hits for her concert, including songs from her Special album, which released earlier this year in July 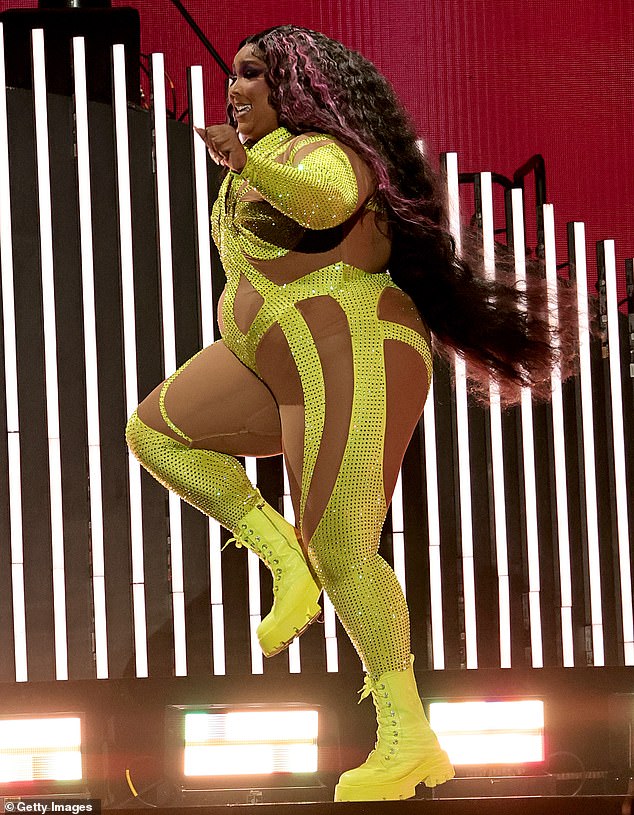 Heartfelt performance: Lizzo was pictured jumping on stage as she performed one of her hits for the cheering fans in the venue