Lizzo made a statement as she stepped out for a date at Craig’s in West Hollywood with a mystery man on Monday evening.

The 33-year-old boisterous singer poked fun at her ample chest as she modeled a bodysuit that said ‘fake boobs,’ with daisy duke shorts.

Lizzo — who recently secured her third No. 1 song on Billboard’s Hot R&B/Hip-Hop charts with Rumors — beamed from ear to ear as she enjoyed a meal with a handsome gentleman.

Shining bright: The 33-year-old singer who recently snagged her third No. 1 on the Top 100 Charts was seen wearing a ‘fake boobs’ bodysuit while dining with a handsome mystery man at Craig’s

The Cuz I love You singer wore a sleeveless black bodysuit from her own line of merchandise that showed off a generous amount of cleavage, which she paired with frayed jean shorts.

She dressed up the look for evening with patent leather ankle boots and carried a small bucket bag embellished with her name on it in rhinestones.

Her hair was left down and curly with nineties butterfly clips on either side of her forehead.

And she continued to accessorize with large hoops and shielded her face behind oversized sunglasses. 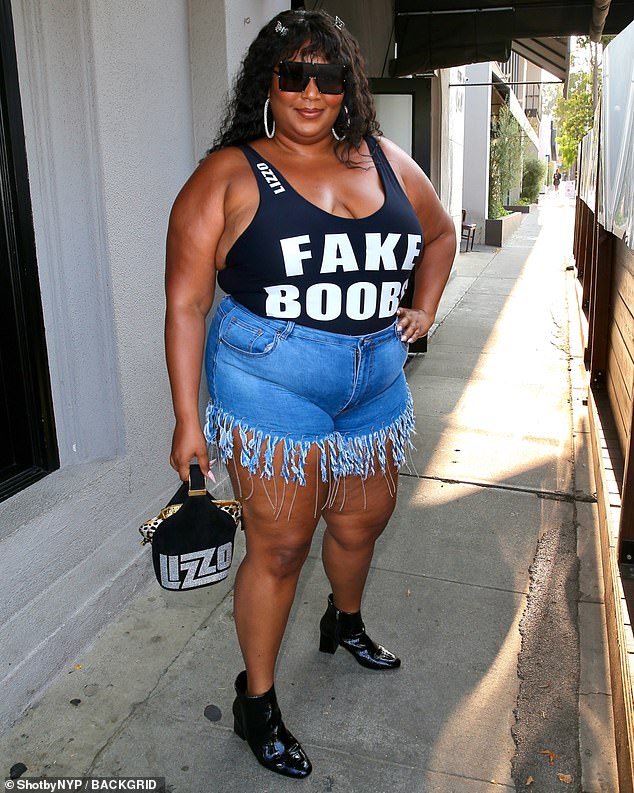 Working it: Lizzo paired the cheeky bodysuit with jean shorts and ankle boots while carrying a bucket bag with her name embellished on it 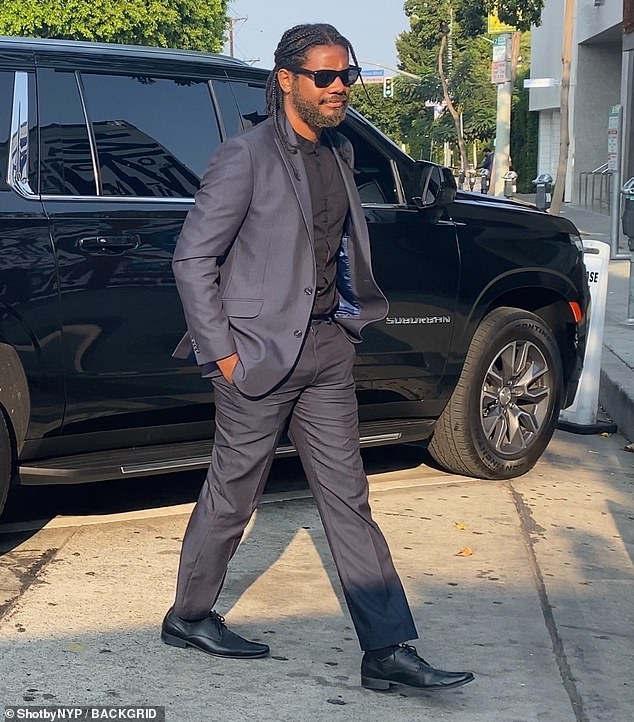 Date night! Trailing behind her was a handsome mystery man who she was first seen kissing in March

And trailing behind her was a handsome gentlemen who looked dapper in a suit with a black collared shirt and a pair of dress shoes.

His braided hair was tied back in a ponytail and he walked in behind her in a pair of sunglasses with his hands in his pocket.

She was first spotted kissing the mystery man back in March in photos obtained by The Shade Room but she took to Instagram after that to talk about her relationship status.

Sharing a sexy video in lingerie she captioned the post: ‘SINGLE’ but it appears months later she’s still hanging out with the same man, despite wanting to keep details of their tryst underwraps. 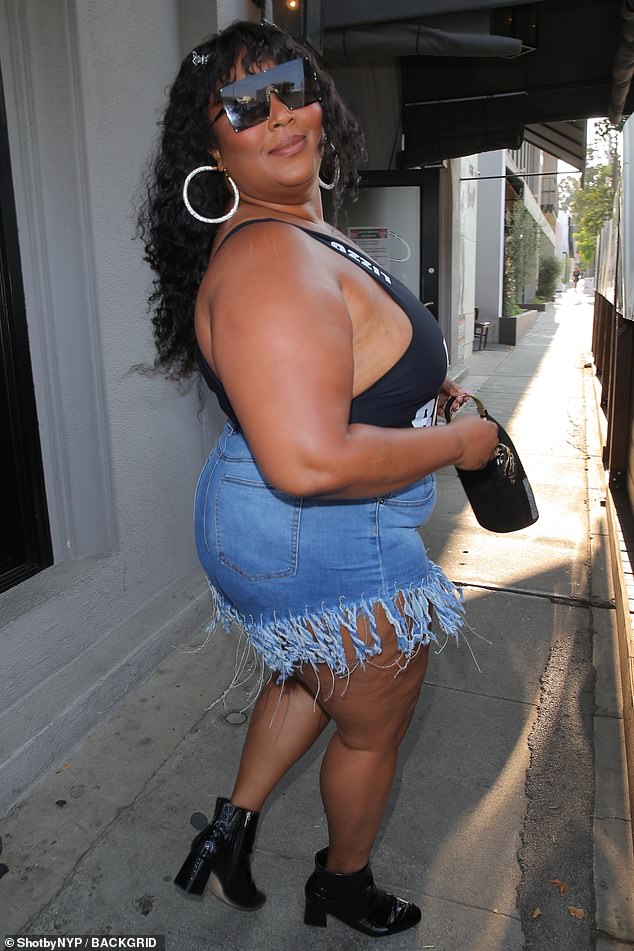 Keeping things quiet: Lizzo had first appeared with the gentlemen on vacation in the spring but after photos obtained by The Shade Room were posted she took to Instagram to deem herself ‘single’

Ahead of her date, Lizzo continued to celebrate her song Rumors with Cardi B being No. 4 on Billboard’s Hot 100 Charts and it currently sits at No. 1 on Hot R&B/Hip-Hop Songs.

‘DONT MIND ME… JUST BEIN EXTRA TODAY’ she wrote as she shared a TikTok video of her dancing around in the same ‘fake boobs’ bodysuit.

The vegan singer added: ‘IM FINNA EAT SOMETHING DELICIOUS I LOVE YALL!!!!’ ahead of her meal with her rumored boyfriend at Craig’s. 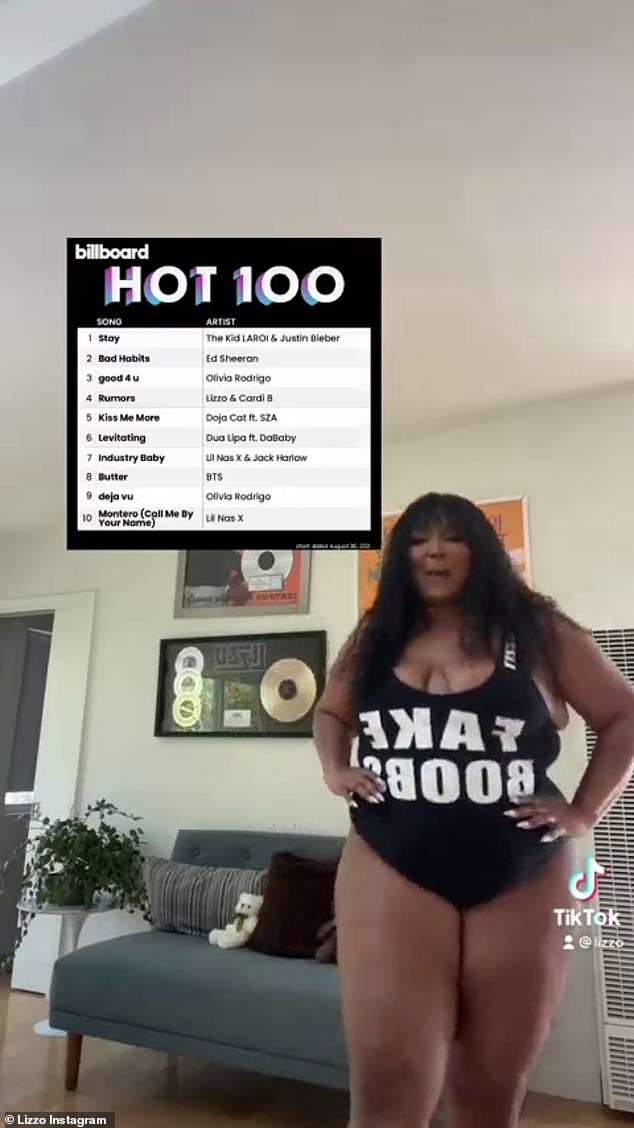 Celebrating: Her song Rumors with Cardi B currently sits at No. 4 on the Billboard Hot 100 chart 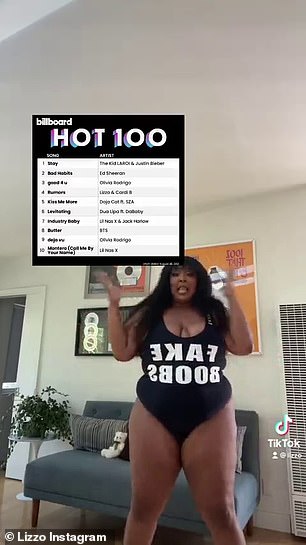 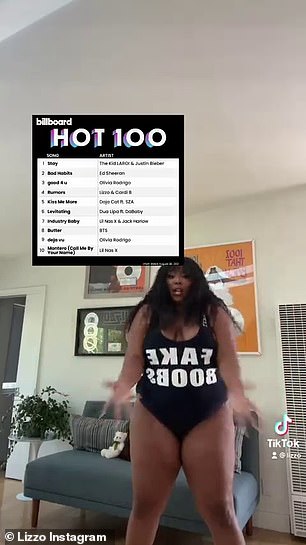 Reason to smile: DONT MIND ME… JUST BEIN EXTRA TODAY’ she wrote as she shared a TikTok video of her dancing around in the same ‘fake boobs’ bodysuit 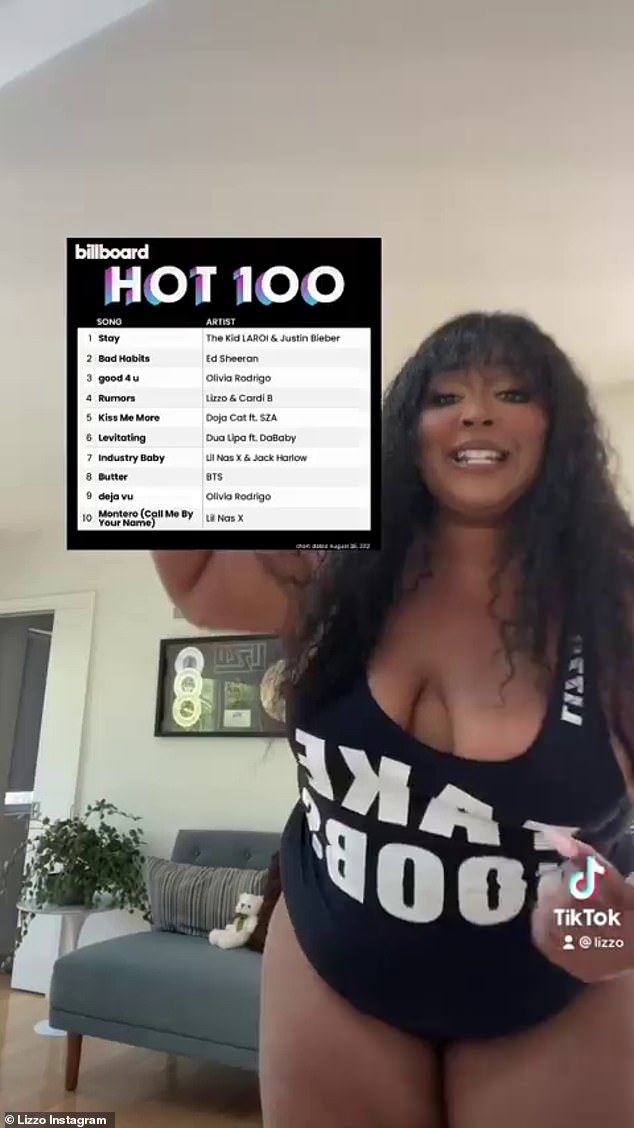 Going off: ‘IM FINNA EAT SOMETHING DELICIOUS I LOVE YALL!!!!’ she wrote ahead of her meal with her rumored boyfriend at Craig’s

The racy music video — which was first released on August 12 — already has over 20M views.

Unfortunately she found herself on the receiving end of hate from trolls who hurled racist and fat-phobic comments at her causing her to break down on an Instagram live.

‘Sometimes I feel like the world just don’t love me back. It’s like, it doesn’t matter how much positive energy you put into the world. You’re still going to have people who have something mean to say about you,’ she said sobbing.

‘For the people who are just always going to have something negative to say about me that’s nothing to do with music, or content of my character, or me as an artist, and just have everything to do with my body or whatever trope you think I fall into, suck my p***y from behind ’cause y’all motherf***ers gonna be the main ones catching up.’ 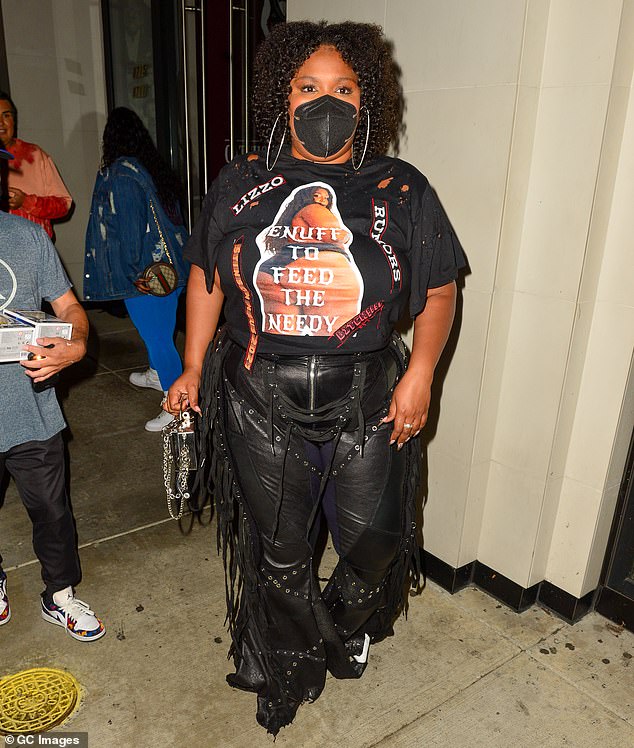 Over the weekend: Ahead of she and Cardi B’s Hot 100 ranking, Lizzo was seen dining at Catch in West Hollywood over the weekend; pictured August 20