Britons who have a Lloyds Avios Rewards credit card have been urged by an industry expert to check their statements after reports of a string of fraudulent activity.

Rob Burgess, founder of credit card website Head for Points, had a spate of people contact him after seeing fraudulent transactions appear on their statements.

The cards are the American Express version of Lloyds Avios credit cards and the majority of the fraud appears to be in the form of contactless payments in the US.

Avios fraud: Many who have the Lloyds Avios card have reported fraudulent activity

Mr Burgess told This is Money: ‘The extent of the fraud came to light after our readers started to post comments about transactions that were appearing on their cards from stores in the USA. More than 50 readers posted their experiences.

‘The Lloyds Avios Rewards card is very popular with because it is the only rewards credit card in the UK to offer 0 per cent FX fees when travelling and reward points on top.

‘It isn’t clear if Lloyds, American Express or a third party is responsible for the data breach that led to this fraud, but Lloyds is certainly responsible for not automatically notifying all cardholders of a potential breach.’

It is believed the Lloyds Avios Rewards card is one of the most popular reward credit cards currently on offer.

Earlier in the year, This is Money revealed how some customers who use the card, enticed by the bank’s offer of Avios points that can be redeemed for flights, saw balances vanish – and were told it will take fully six months to rectify.

Head for Points – the UK’s biggest frequent flyer website – has a number of people who have been hit by the fraud, some of which we highlight below:

‘About a week ago my wife’s Lloyds Avios Amex card was used fraudulently by someone over in New York for a few different things so we called Lloyds to talk about this and get the card cancelled and a replacement sent out.

‘Logged into her account yesterday to find that my supplementary Amex was also used fraudulently earlier this week, also in New York.

‘As my card has been sitting in a drawer at home and my wife’s has been in her purse the whole time, certainly haven’t been nicked and cloned or anything like that

‘As my card has been sitting in a drawer at home and my wife’s has been in her purse the whole time, certainly haven’t been nicked and cloned or anything like that.

‘When speaking to Lloyds last night, they said that they were currently getting thousands of calls a day as they were seeing a lot of fraud on specifically the Amex cards people had, with the vast majority of the activity being contactless transactions in the US. 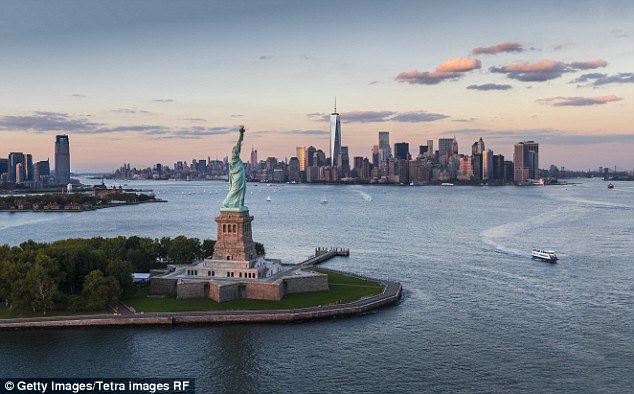 Familiar pattern: Many of the fraudulent payments have been made in New York

Another said: ‘I got a text from Lloyds over the weekend asking if I was trying to pay for something in Albertson? As I’d never heard of the place I texted back no.

‘Checked my account and there were six transactions all in New York State I didn’t recognise. Two in Office Depot, one in Babiesrus. Called Lloyds and all removed no problem but it did make me wonder how the card had been cloned, I really use it infrequently.’

Another added: ‘I had to ring them last night as I had a fraudulent transaction appear in my pending transactions. They need to wait until it clears to refund it.

‘Apparently there were a few more attempts that were declined. It does look like there has been a serious breach of security somewhere.’

One reader said: ‘My Lloyds Amex was used fraudulently to pay some car parking charges in the US. I think there is a huge data breach here with Lloyds – just hope they only lost card numbers and not all of our personal information.

‘I spent two hours on the phone with Lloyds this week trying to sort it, they were blaming Amex for it, until I said I’d call Amex directly and ask, then they changed their mind.’

A Lloyds Bank spokesperson said: ‘We are aware that a small number of customers have been affected by recent fraudulent activity.

‘We use a combination of industry leading fraud detection systems and experienced fraud investigators to minimise the occurrence of fraud, maximise the protection of customers, and to ensure that fraudulent transactions are identified and declined.

‘Credit cards remain an important and safe method of payment available for our customers.

‘Our dedicated Fraud Operations team are available 24 hours a day, 365 days a year to assist any customers impacted by fraud.’