By Victoria Bischoff and James Burton For The Daily Mail

Britain’s biggest bank is to pay small shopkeepers to offer cashback to customers in areas where ATMs are disappearing.

It is hoped the move will increase the free access to cash as well as help save struggling local shops, such as newsagents, greengrocers and butchers, by boosting the number of shoppers popping in.

Lloyds’ scheme marks the first time a bank will pay small stores to offer cashback – a service already provided by large supermarkets – and follows a Daily Mail campaign to protect access to basic bank services amid the closure of thousands of branches.

Critics have accused Lloyds’ branch closures of helping to create so-called ‘cash machine deserts’ where it is impossible to withdraw cash. The bank has shut more than 1,200 bank branches since the financial crisis in 2008 [File photo]

The cashback service, in partnership with Visa, will be available to customers of all banks, not just those with a Lloyds account.

Vim Maru, group director for retail banking at Lloyds, said: ‘Our cashback pilot aims to increase the number of places where people can withdraw money, particularly in those areas which are under-served by free-to-use ATMs.

The unlocked potential of cashback is obvious, as there are literally tens of thousands of local shops up and down our high streets that already have all the infrastructure in place to offer this service.’

To begin with, customers will have to make a purchase using their debit card in order to get cashback, but in future this may not be necessary.

In return for providing the service, the bank will pay shops a set fee – expected to be between 20p and 25p per transaction.

Lloyds – which has shut more than 1,200 bank branches since the financial crisis in 2008, pulling out of rural and coastal towns across the UK – said it will trial the scheme among 12 retailers this spring, with a view to rolling it out to about 50,000 later this year. 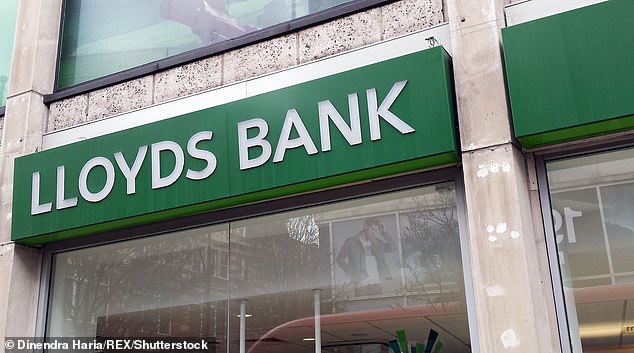 The cashback service, in partnership with Visa, will be available to customers of all banks, not just those with a Lloyds account. Critics have accused Lloyds’ branch closures of helping to create so-called ‘cash machine deserts’ where it is impossible to withdraw cash [File photo]

It has chosen shops in towns and villages where access to cash has been identified as being more difficult, such as rural or less affluent areas which often rely on a small number of ATMs.

One greengrocer in Stockbridge, Hampshire, has already been offering Lloyds’ scheme.

Town with one ATM… and it charges!

It has a population of 20,000 but no bank and not one free cashpoint.

Business owners in Burslem, one of the six towns that make up the city of Stoke-on-Trent, have to travel to nearby Hanley or Tunstall to cash in their takings.

For shoppers there is an ATM – but it charges for withdrawals. The last bank in Burslem, a branch of LLoyds, closed its doors for good last April.

The plight of the town – which was home to the potter Josiah Wedgwood and was known as the mother town of the Potteries– shows it is not only rural communities which are suffering as banks respond to an increasingly cashless society and the growth of internet banking.

Free ATMs have been closing at an unprecedented rate of around 250 a month since the beginning of 2018.

Beccy Soper of Beccy’s Greengrocers said: ‘I feel that offering cashback is an important thing to do for the town. There aren’t many other options around here. From a business point of view, anything that brings extra customers on to our high street is obviously very welcome. But there are also other benefits that aren’t as obvious, like paying out more cash from my till which means I don’t need to make as many trips to the bank to deposit my takings.’

However, critics have accused Lloyds’ branch closures of helping to create so-called ‘cash machine deserts’ where it is impossible to withdraw cash.

Lloyds also successfully lobbied for a cut in the fees which banks pay when account-holders take money out of an independent operator’s cash machine.

The cut made it harder for these firms to turn a profit and has been blamed for causing huge numbers of ATMS to be shut, with 2,500 lost last year.

Jenny Ross, money editor at consumer watchdog Which?, said: ‘It is right that banks are taking steps to address concerns about access to cash, but these can only attempt to solve the problem in the short-term.

‘Cashback is not an adequate substitute for ATMs or bank branches, and it’s essential that communities continue to have access to their money free of charge for as long as they need it.’