A paedophile who abducted a girl, 12, tied her up and raped her complains his 28-year jail term is ‘disproportionate’ to his ‘relatively short’ hour-long crime.

‘Ghillie suit’ rapist Troy Stephen Johnson was described by a judge as ‘truly evil’ when he was thrown behind bars for almost three decades late last year.

The ex-NBN contractor was likened to ‘the devil’ for dressing in camouflage, grabbing the girl off a bush track and raping her on May 15, 2017.

But the father-of-three’s defence barrister Susan Kluss has told an appeals court that Johnson’s jail sentence is so ‘crushing’ he will abandon all hope for a future.

In court documents, Ms Kluss said his maximum sentence – which was for both the camouflage incident and his separate grooming of another teen – was ‘disproportionate to the offending’.

Troy Stephen Johnson, 34, was sentenced to a maximum 28 years behind bars with 21 years non-parole, with a District Court judge likening him to ‘the devil’ 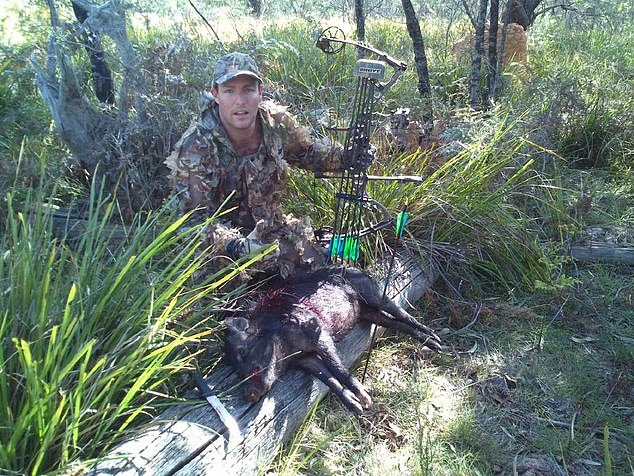 ‘(It) may (be) considered a crushing sentence in that it will leave the offender with a sense of hopelessness and destroys any expectation of a useful life after release,’ Ms Kluss said.

In documents obtained by Daily Mail Australia, the lawyer argued the lengthy jail term was ‘manifestly excessive’ compared to other similar cases and was ‘unreasonable or plainly unjust’.

The lawyer said Johnson’s previous grooming offences with another teen were serious and admitted the seven convictions over the abduction were at a ‘different level’.

However, she argued he had committed a single hour-long attack on the Central Coast girl, rather than a prolonged period of offending.

‘The offences are of course at a different level … but they all occurred (within) the period of one hour as opposed to separate days over time,’ she said.

‘Further, they were relatively short in duration.

‘Further (the) applicant had no criminal history, he had been employed supporting his family prior to his offending behaviour’.

Ms Kluss told the court the sentence will see Johnson ‘despair and give up hope’ particularly due to his isolation from his family.

Johnson’s jail term has a 21-year-old non-parole period, and the Crown is fighting to see him serve out his sentence.

A panel of judges has reserved their decision on the appeal.

Why judge described Troy Johnson as ‘the devil’ 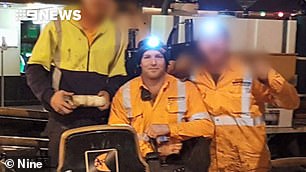 Johnson (pictured) grabbed the girl, 12, from behind as she walked to school on May 15, 2017. Armed with a knife and a large tree branch, he tied the girl to a tree during the one-hour long ordeal

During his sentencing last year, District Court Judge David Wilson praised the victim’s courage and bluntly told the rapist, Johnson: ‘Society has no place for a person like you’.

‘Your conduct suggests you are a person who is simply depraved.’

Despite the depravity of Johnson’s crimes, sources in the legal fraternity were surprised by the length of the sentence that was handed down by Judge Wilson at the time.

During his sentencing, Judge Wilson said Johnson had engaged in ‘truly evil conduct’ and described him as too ‘cowardly’ to express remorse or admit his paedophilic behaviour to his victim from the witness box.

Despite being subjected to horrific sexual abuse for close to one hour, the young girl took mental notes about his appearance that proved crucial in tracking him down.

‘(She) saw that the offender (Johnson) was a white Australian male with blue eyes, greyish-blonde hair with a very hairy neck at the back,’ court documents state.

‘He was about 20-35 years old, 30 centimetres taller than her and well-built.

‘He was wearing a distinctive camouflage baseball cap with face covering material stitched under the peak so that it was difficult to see his eyes.

‘A pair of blue trousers could be seen under the camouflage pants.’

He warned him he was receiving a harsh jail sentence due to the devastating impact this crimes had on the victim.

‘You told your psychiatrist the devil must be responsible – you were correct,’ Judge Wilson said.

Sentencing documents previously revealed how detectives were able to track down Johnson after his victim memorised her attacker’s baseball cap and facial features.

Johnson had been tracking the girl for weeks prior to the attack, even snapping photos of her walking along the same track previously.

Court documents said the sight of the horrifying mask startled the schoolgirl, who yelled ‘stop, stop, stop’ as he threatened to hit her with a stick.

Johnson then put the girl in a headlock and dragged her to a clearing where he tied her to a tree with cable ties.

After eventually being cut loose, the girl ran to school crying, where she told a friend’s mother at the canteen what had happened.

That day, court documents said Johnson arrived at work late about 9.30am, after having missed several text messages and calls from his workmates.

He was covered in dirt, grass and tree matter but told his colleagues he had been involved in a peculiar road rage incident where he chased a driver into the bush and fell. 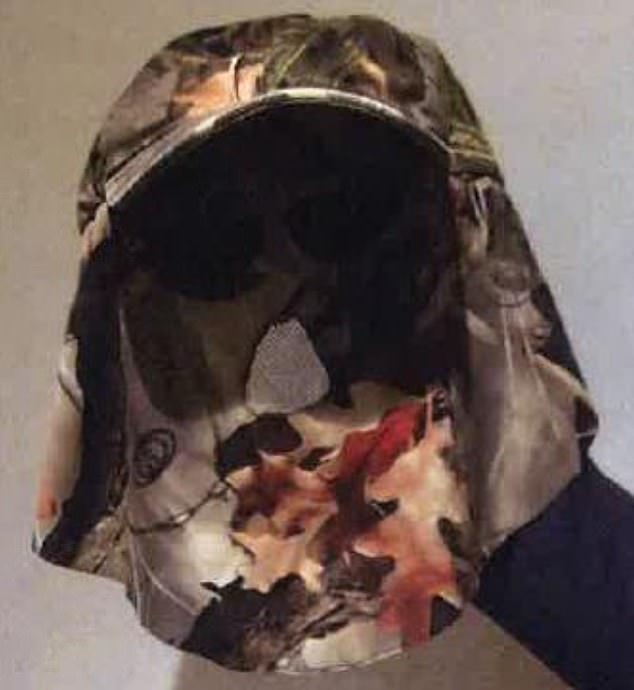 Johnson was wearing this terrifying homemade combination of a camouflage baseball cap and face covering material when he attacked. The brave young girl was able to memorise features of his outfit, that later helped police to identify him 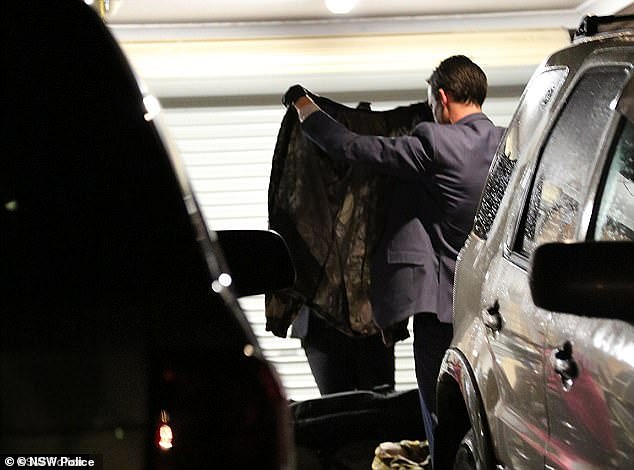 During a raid on his home following his arrest in August 2017, police found a ‘rape kit’ which contained hunting knives, camouflage clothing and cable ties 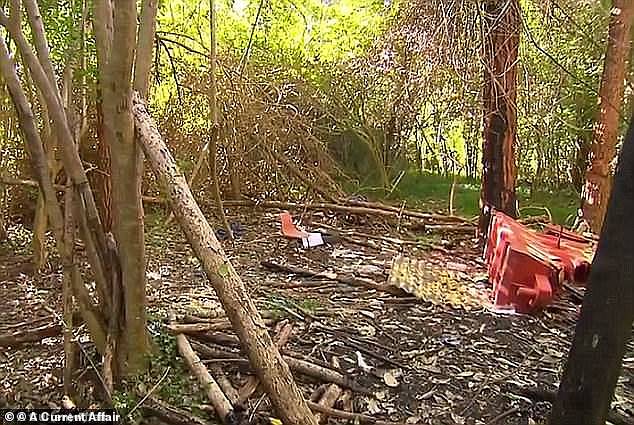 The court heard Johnson had called a friend after the attack, boasting: ‘You’ll never guess what I just did’ (pictured is the scene of the horrific assault) 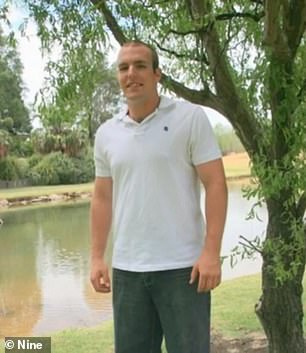 The married father-of-three assaulted the girl over about an hour, court documents said

Documents show police pieced together other evidence which led them to arrest Johnson two months after the fact.

A police car had captured a Ford Escape being driven by Johnson just 1.5kms from the crime scene at 9.07am, just four minutes after the 000 call.

Sickeningly, the court heard he had boasted to a friend that he had sexually abused a girl, saying: ‘Dude, you’ll never guess what i just did’.

He also claimed to have a contingency plan in case he got caught, telling his friend that he would ‘kill himself by taking a large dose of insulin’. But he did not succeed in the attempt.

Johnson remains locked up at the South Coast Correctional Facility and could be eligible for parole in 2040.