A devastated Sydney vet is begging for a ban on killer dog breeds after two women were ripped apart by a giant American pit bull, said to be the size of a miniature pony.

Desperate neighbours beat the savage dog with an iron bar and stabbed it to stop the frenzied attack on its female owner at a rural home south of Sydney.

The dog’s 54-year-old owner was found with severe bite wounds when ambulance crews arrived at her home in Pheasants Nest in the Macarthur region on Friday morning.

The powerful American Staffordshire terrier, reported to weigh more than 80kg, had viciously torn at her face in the horror mauling, said locals on Sunday.

The woman’s daughter and two neighbours rushed to help but the dog then turned on them, savaging the second woman, ripping her flesh from the bone, and snapping at a man trying to save them.

A devastated Sydney vet is begging for a ban on killer dog breeds after two women were ripped apart by a giant American pit bull, the size of a miniature pony (pictured, medics work on the victims at the scene) 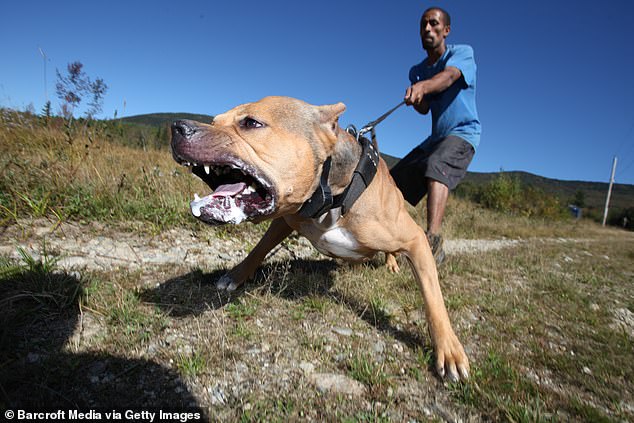 Desperate rescuers beat the savage dog with an iron bar and stabbed it to stop the frenzied attack on its woman owner at a rural home south of Sydney. (Pictured, a stock image of an American pit bull terrier)

Emergency services found the two seriously injured women at the home, while the man escaped with minor injuries.

‘They shouldn’t have had that dog at all.’

Local Anthony Dennis heard emergency sirens flocking to the scene before seeing the medical chopper touch down at the property.

‘The worst attack was on the older woman who had facial injuries and they airlifted her to a Sydney hospital,’ he said. 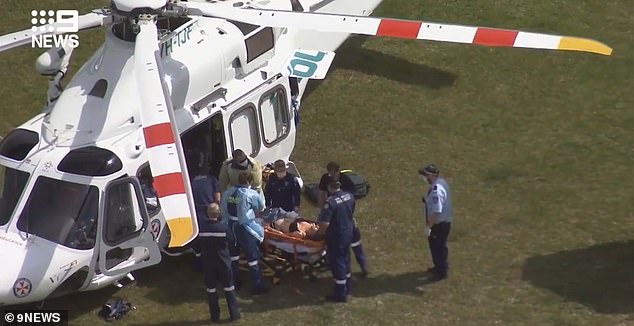 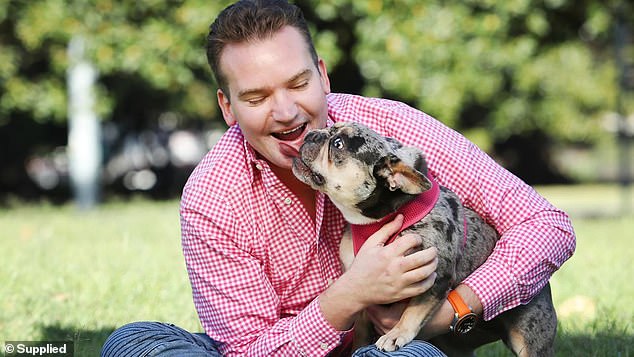 Leading Sydney vet Dr Sam Kovac, 32, (pictured) is begging for authorities to ban the breed before anyone else is killed or mauled

‘While they were trying to get the dog off that woman, someone was hitting the dog with a metal bar. It must have been a harrowing incident for everyone.’

He added: ‘My wife had walked past the property recently and they were pretty excitable dogs. A lot of people have hunting dogs around here.

‘I don’t know if this dog was, but any breed which is territorial and capable of inflicting serious injury on people shouldn’t be in a family home.’

The attack on Friday comes just two months after a deadly attack on the Central Coast in July when a five week old baby was mauled to death by another pit bull. 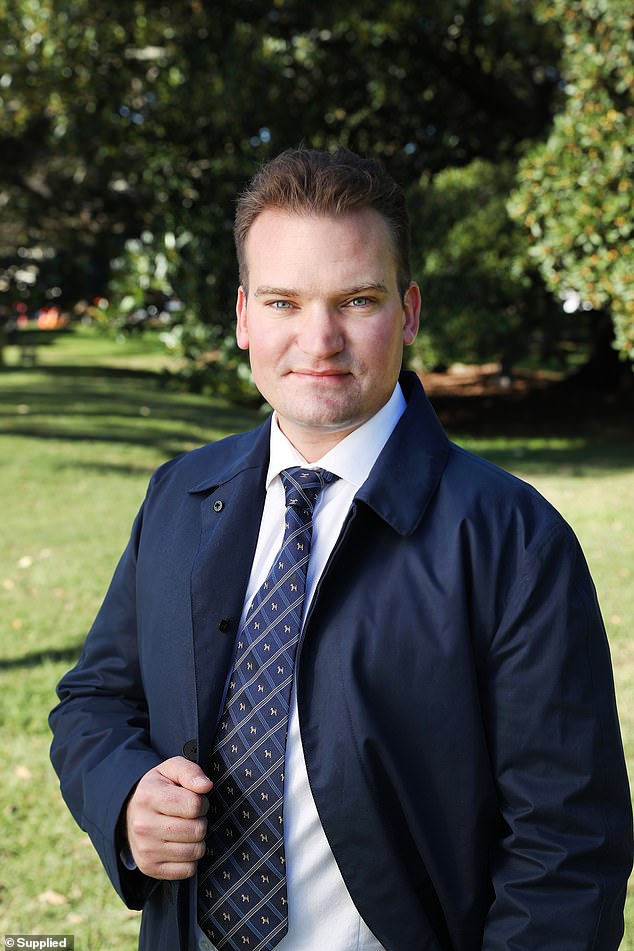 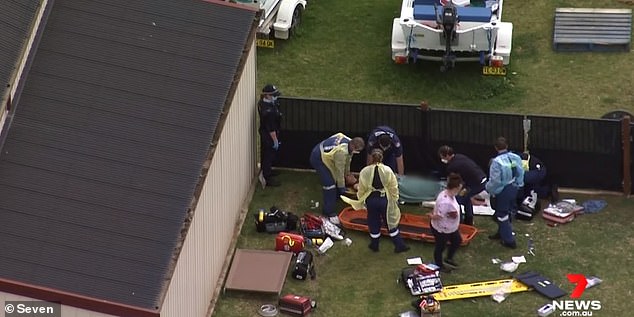 The woman’s daughter and a neighbour rushed to help but the dog then turned on them, savaging the second woman, ripping her flesh from the bone, and snapping at the man trying to save them (pictured, medics work on the victims at the scene)

Now leading Sydney vet Dr Sam Kovac, 32, is begging for authorities to ban the breed before anyone else is killed or mauled.

He stresses he doesn’t want existing American Staffordshire terriers euthanised –  but wants an immediate ban on selling, breeding, importing or rehoming the breed.

‘This latest attack is just history repeating,’ he told Daily Mail Australia on Sunday. ‘Most of the time they won’t be killers.

‘But when you’re dealing with such a powerful breed that’s been bred to fight and kill, when they really want to do this, nobody can do anything to fend them off.

‘They should not be allowed to be bred in this country.’ 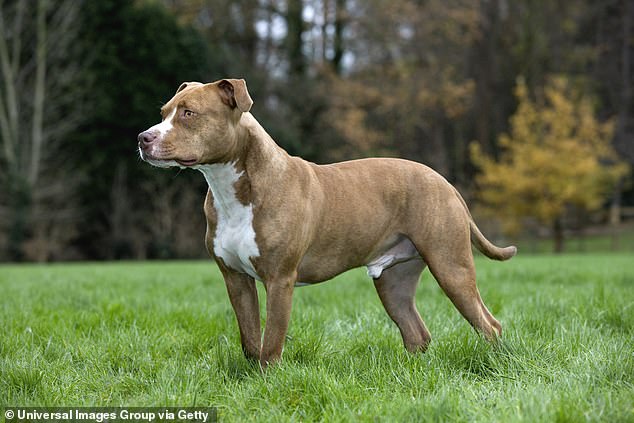 Vet Sam Kovac said he spoke out in the hope of sparking change in July but his pleas for a ban on the breed had fallen on deaf ears (pictured, a stock image of an American Staffordshire terrier)

He said he had been widely criticised for calling for a ban on the breed after speaking out following the July toddler tragedy in Kariong, but the latest incident had strengthened his view.

‘Ninety per cent of the time, they’re fine,’ he admitted.

‘But in that very small percentage, if they decide that they want to go after and kill a baby or a human like this horrible case where they were mauled to the bone, no-one can stop them.

‘I just checked online and there are literally hundreds of puppies for sale on Gumtree for American Staffordshire Terriers. Rescue shelters are full of them too.

‘A proportion of them are going to go to people who don’t know how to train them and look after this very exuberantly powerful breed – and encourage some of their bad character traits. 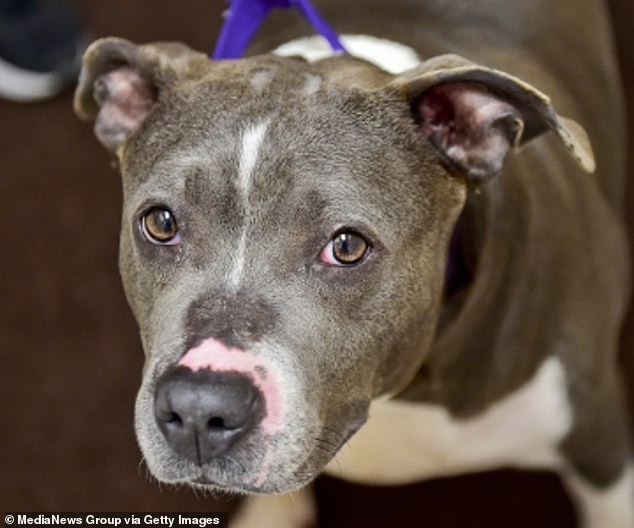 Vet Sam Kovacs said that if an American Pit Bull terrier (pictured) decides to do what they are often bred for, to guard or to kill, then the outcome can be disastrous

‘If they decide to do what they were bred for, and that’s to guard or to kill, then the outcome can be disastrous.’

Corgi-owning Dr Kovac, who runs three Southern Vet Clinics in Sydney, said he spoke out in the hope of sparking change in July but his pleas fell on deaf ears.

‘Nobody’s contacted me officially about it,’ he said. ‘But I really do think it would be good to have a national open conversation about these breeds.

A heroic neighbour of the victims, who has chosen to remain anonymous, said she had just driven into her driveway on Friday morning when she heard calls for help and saw the a woman being mauled by the dog in their front yard.

She said she didn’t believe her actions were heroic, but instead, saw someone who was in danger and needed help. 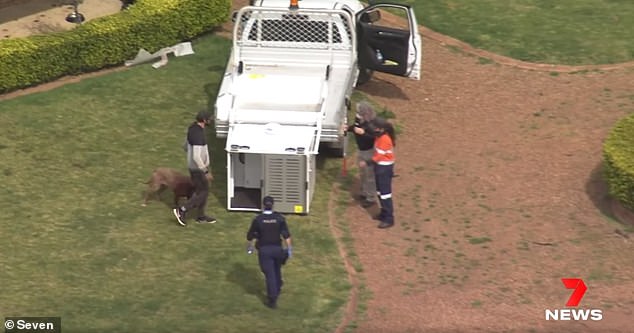 Emergency services (pictured) found the two seriously injured women at the home, while the man escaped with minor injuries

‘My neighbour’s daughter was there trying to stab the dog with a knife, I tried to kick the dog off, but it was latched onto her upper thigh,’ the woman recounted to The Sunday Telegraph.

‘The bite was down to the bone, I could see the tendons.’

The neighbour searched for a hose but instead grabbed a knife to try to cut the vicious dog’s throat as she felt it was the only way to stop the attack.

The woman described the dog as ‘the size of a miniature pony and weighing between 80 and 100kg’.

The use of the knife was enough for the neighbour to get the dog away from the 54-year-old victim and shout for help.

A resident who was driving by the house saw what was happening and quickly dialled triple-zero.

The brave neighbour and the injured daughter managed to drag the older victim to another side of the fence and lay her down as she was worried the dog would soon come back and kill them.

‘I grabbed all the towels off the line to tourniquet her leg, that wound on her leg man… and the wound on her neck was so bad, I thought “I don’t want to watch her die”,’ she said.

The neighbour said while the victim’s daughter had suffered deep cuts on her leg, she was more worried for her mother. 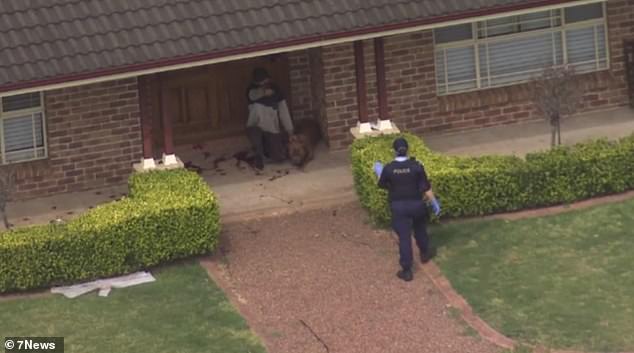 A female police officer later arrived on the scene, and the neighbour shouted: ‘Don’t come in there’s a dog that is mental, shoot it.’

The officer grabbed her gun and walked around the back, but the dog never returned.

An ambulance inspector arrived on the scene shortly after and treated the injuries suffered by the victims.

The 54-year-old woman was airlifted to Liverpool hospital, while her daughter was driven to hospital shortly after.

Wollondilly Shire Council confirmed a ranger had been sent to the address and detained the dog.

The council said in a statement the owner had given permission for the dog to be euthanised due to the extremity of the attack.

‘Both women suffered horrific bite wounds over large parts of their bodies and were transported to hospital in a serious condition,’ he said.

‘It was a confronting scene but paramedics did a fantastic job treating the injured patients before they were taken to hospital.’