Birdwatchers are on tenterhooks monitoring an osprey nestcam during the coronavirus lockdown as a female sits waiting for her missing male mate who has the future of a breeding programme in his talons.

Hundreds online, including BBC presenter Chris Packham, are observing the nest on a heath along the edge of Poole Harbour, where a female has been waiting for days for her mate to show up after the pair befriended each other last year.

Then, the two lovebirds were too young to breed, but 12 months on experts say they are ready to mate.

If they are successful it will be the first time in 200 years southern Britain will be colonised by the majestic bird of prey. 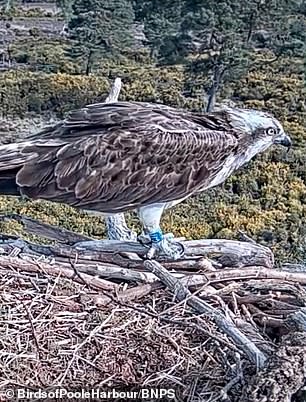 CJ7 waiting for LS7 on Tuesday morning in a nest on a heath along the edge of Poole Harbour. Hundreds of online birdwatchers across Britain are tuning in hoping for the male’s arrival

Mr Packham, a naturalist, is one of hundreds of people avidly following the progress of the osprey.

He has tweeted and posted numerous updates on CJ7 as she awaits the arrival of her mate LS7 from Gambia.

In one Facebook message, he wrote: ‘No live with me and Megs (conservationist Megan McCubbin) this morning, but here’s something even better!

‘A live feed of female Osprey CJ7 in Poole Harbour as she continues to bring sticks and materials to this nest.’

He also commented: ‘The nest was made by the team at the Poole Harbour Osprey Project to encourage ospreys to give them a head-start.

‘CJ7 has been observed coming in with different nesting materials to line the nest with too! Exciting times!’

His posts have over 1,200 comments from fellow birdwatchers excited about the possibility of southern England being recolonised by the osprey after 200 years.

The Birds of Poole Harbour thanked Packham for his support, saying: ‘Huge thanks to Chris Packham & Megan McCubbin for inviting us to share our exciting news with you all.’

Ospreys are extinct in many parts of western Europe, although there are sustainable populations of them in northern Scotland.

Ornithologists in Poole, Dorset, realised several years ago these birds stop off in the harbour to feed while they migrate south to Africa. 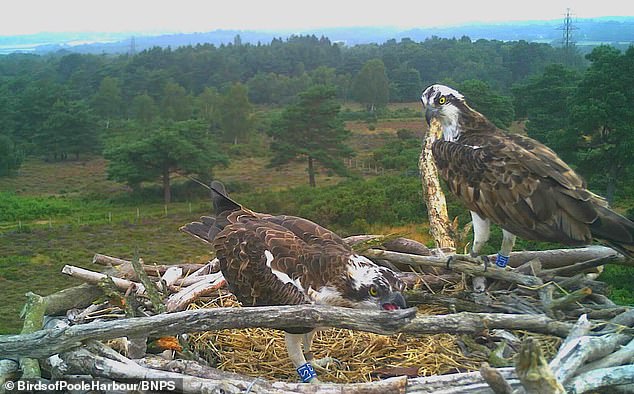 LS7 and CJ7 pictured from the nest platform in 2019. Everyone has their fingers crossed he will return soon, especially as the breeding window for ospreys usually closes at the end of April 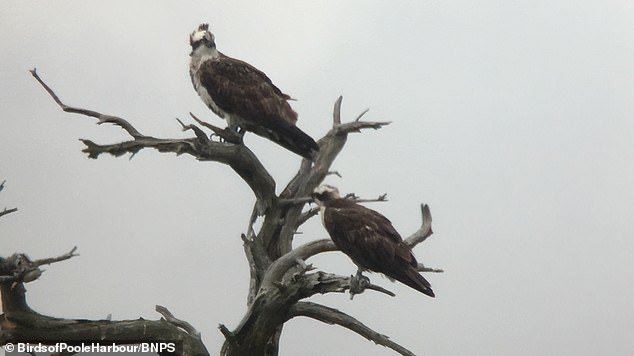 LS7 AND CJ7 on the nest platform in 2019. Although the two birds are tagged, they are not microchipped, but were spotted heading south to Africa together last August

So they set up some raised platform nests and released 33 chicks taken from nests in Scotland in the hope they would make Poole their UK home.

Like last year the female, known by her tag as CJ7, has returned from Gambia to one of the nests – much to the delight of experts from the wildlife charity Birds of Poole Harbour.

They, along with enthusiasts viewing on Youtube, have watched as she has busied herself by shoring up her nest while also keeping an eye out for her partner, known as LS7.

Everyone has their fingers crossed he will return soon, especially as the breeding window for ospreys usually closes at the end of April.

There was one moment of hope when another bird momentarily entered the nest, but it was identified as a red kite.

Although the two birds are tagged, they are not microchipped, but were spotted heading south to Africa together last August.

Birds of Poole Harbour’s Paul Morton said: ‘The female returned to a nest here last spring and waited and waited for a mate and then on June 12 a male, LS7, turned up out of nowhere.

‘They struck up a relationship and spent the whole of the summer bonding. They were inseparable.

‘It was too late for the breeding season but in any case he was too young. But this year he is old enough to breed.

‘The same female appeared on our nest-cam last Thursday and has been going around the area trying to suss out the best place to breed.

‘She spent a whole morning bringing moss and grass to the nest. She has come back ready and raring to go and is waiting for him to arrive.’

He added: ‘There is the possibility he might not have survived the winter but the hope is he is somewhere between Africa and Poole. 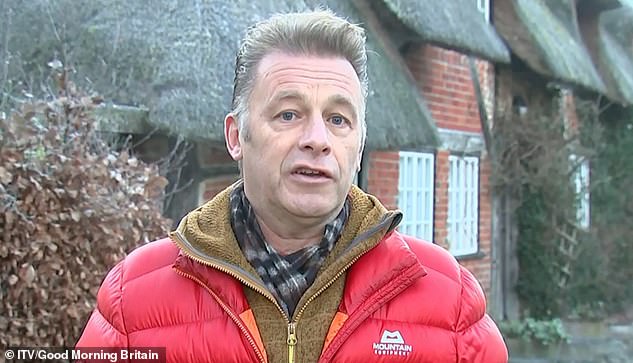 Chris Packham, a TV presenter and naturalist, is one of hundreds of people avidly following the progress of the osprey, tweeting and posting numerous Facebook updates on CJ7

‘They have got until the end of April to mate otherwise it will be a lost season but they will still spend the summer together, consolidating their relationship.

‘We still have plenty of time. If it does happen it will be the first bred osprey in southern Britain in 200 years and that is a significant conservation story.’

The project has captured the imagination of people who are watching the story unfold on the Poole Harbour Osprey Nest Cam live channel.

One social media follower posted: ‘This is rather poignant, I really hope LS7 makes it back.’

Another commented: ‘I thought she was waiting for any osprey but now knowing LS7 knows this nest, hopefully he’ll be along soon. Do hope he’s coming.’

Mr Morton said: ‘The response online has been huge. Ospreys are very characteristic and seem to capture people’s imagination and attention.

‘They are extremely shy in the wild so a high-definition camera for people to see these birds up close adds to the spectacle.’

Ospreys – Pandion haliaetus in Latin – are also known as sea hawks and most of their diet is fish. They have a wingspan of up to 6ft and are about the same size as a falcon  – although they look more like a gull when in flight.

Mr Morton said: ‘The osprey is a very impressive, large bird of prey and they used to be very common across the whole of western Europe until they were wiped out 200 years ago because of persecution and disease.

‘A population was re-established in Scotland in the 1950s and now breeding programmes have seen pairs introduced elsewhere in England and Wales, but until now not in southern England.

‘We started the programme to re-introduce them to southern England in 2017 and fingers crossed we will have ospreys once again breeding here.’