Lockdown measures imposed in late March to slow down the spread of coronavirus may not have been as effective in black, Asian and minority ethnic (BAME) communities because of the ‘one-size-fits-all approach’, scientists have said.

Academics at the University of Leicester found that Covid-19 cases continued to rise in BAME groups in certain parts of Leicester in the three weeks after the announcement was made, while rates in white groups ‘dropped off very sharply’.

They said the findings, published recently in the journal EClinicalMedicine by The Lancet, raise ‘serious questions’ on whether lockdown on its own is effective for a diverse population.

Academics at the University of Leicester have found that lockdown measures imposed in March failed to stop the rise of coronavirus infections among BAME groups. Above, a sign in Leicester tells residents what measures they should follow during the localised lockdown

Dr Manish Pareek, an associate clinical professor in infectious diseases at the University of Leicester, told the PA news agency: ‘Obviously, lockdown has had a huge impact in reducing infection rates but the question is, is it enough for certain parts of the country?

‘Lockdown as a whole is quite a blunt tool… perhaps what we should be thinking about is a more nuanced approach which allows people to work with local solutions.’

Dr Pareek and his team studied patients admitted to the University Hospitals of Leicester NHS Trust.

Our @EClinicalMed
findings from Leicester’s first wave have implications for response to second spike in Leicester:

They found the proportion of people from BAME groups who tested positive for coronavirus continued to rise for three weeks from March 23, peaking at 50.9%, but the figure for people from white backgrounds remained between 24% and 26%.

Dr Pareek told PA: ‘Of course, we can’t be clear about cause and effect, I think, but if we were speculating, there are a number of factors which potentially could explain these findings.

‘One would be that people who come from diverse ethnic groups work in front-facing roles and are not necessarily able to work from home.

‘Secondly, they may be part of large, multi-generational households, which increases the risk of infection, and, thirdly, there may have been issues as to whether the public health messaging actually got through to those populations (due to language and cultural barriers).’ 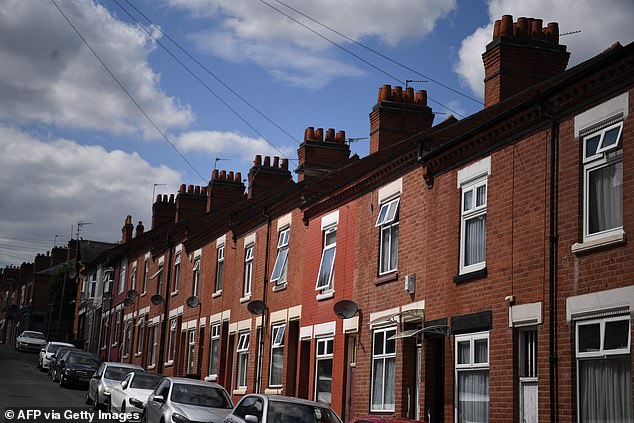 Academics at the University concluded that one-size fits all lockdowns are less effective in BAME communities. Pictured above, a residential street is seen in the Highfields area of Leicester, central England on July 17, 2020, as local lockdown restrictions remain in force due to a spike in cases of the novel coronavirus in the city

Dr Pareek said that as recent research has shown that severe Covid-19 disproportionately affects BAME communities, there is an ‘urgent need to confirm an association between ethnicity and acquiring Covid-19 infection’.

He said tailored public health messaging aimed at specific BAME groups, along with targeted programmes on testing and contact tracing, are needed in preparation for future waves.

Dr Pareek said: ‘At the moment, there is perhaps a one-size-fits-all approach.’

He said that while there have been some targeted interventions in Leicester as the region experienced a fresh outbreak last month, these measures ‘should have been predicted in the first instance’. 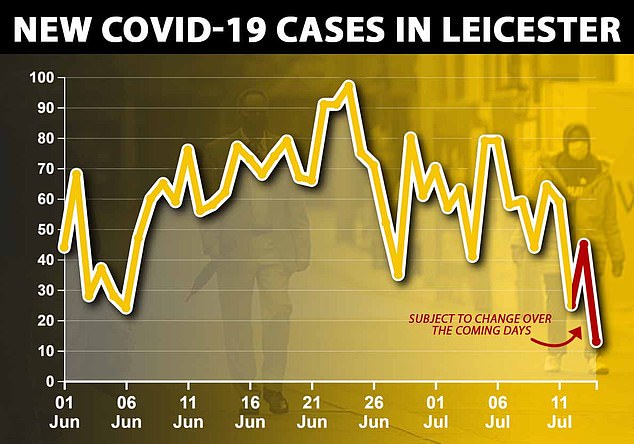 WHAT CAUSED A SPIKE IN CASES IN LEICESTER?

Government officials, local politicians and scientists were initially divided over whether Leicester was experiencing a real surge in cases or whether better testing was simply finding more of them where it wasn’t before.

It is also not clear whether there are any characteristics of Leicester which make it more likely to see a surge in cases, or if random chance has meant the first ‘second wave’ is happening there.

Experts say many of the risk factors in Leicester are the same in all major cities in England.

The mayor of the city, Sir Peter Soulsby, said on BBC Radio 4 that a report sent to him by the Government ‘actually acknowledges that it’s very likely that the increase in number of positives identified is a result of increased testing, and that actually there’s perhaps nothing of any great significance in those results.’

Director of Public Health for the city, Ivan Browne, said: ‘Interestingly it [the surge in cases] is very much around the younger, working age population and predominantly towards the east part of our city. We started to see this level through our testing programme.

‘Young people work in many industries across the city so at this stage what we’re trying to do is gather as much epidemiological information as we can to really try and get underneath and have an understanding. I don’t think at the moment that we are seeing a single source or a single smoking gun on this’.

It was always likely that surges in cases would be seen in cities first. There are more people, raising the risk, and those people are more likely to live in densely populated areas and come into contact with strangers on a regular basis.

Dr Shaun Fitzgerald, from the University of Cambridge, said: ‘There will be differences in the ease with which people can maintain physical distance between densely populated areas and rural environments – so it isn’t surprising to me that we may see localised flare-ups, which in turn may need suppressing through delayed easing or temporary re-introduction of some constraints on some movements and activities.’

Leicester also has high levels of deprivation, which affects people’s lives in ways that put them at risk of catching the virus.

The Samworth Brothers sandwich factory in the city reported over the weekend that it had diagnosed cases of Covid-19 among its staff.

Food processing factories are a higher transmission risk because cold environments allow the virus to survive for longer on hard surfaces and make people’s airways more susceptible to infection.

The local lockdown will be lifted in parts of Leicestershire as soon as this weekend following a review by public health experts, the Government has said.

Areas outside of Leicester City and the borough of Oadby and Wigston will align with national lockdown rules in England from Saturday.

From July 18 non-essential shops, bars, restaurants and hairdressers not in the continuing protected zone will be permitted to open.

Schools and childcare settings outside the protected area will also be able to open from the same date, in line with national restrictions.

Thanking the people of Leicester for following public health advice, Health Secretary Matt Hancock said: ‘I know the past two weeks have been difficult for those living in and around Leicester, especially those who have been shielding for so many weeks.

‘I realise that this will be frustrating for those areas that remain under additional restrictions and I am determined to be straight with you all, we will ease restrictions as soon as the data shows that it is safe to do so.’

However, non-essential shops and schools in Leicester City and the borough of Oadby and Wigston will only be allowed to re-open from July 24 as there is a higher prevalence of coronavirus in these two areas.

Bars, restaurants and hairdressers in these areas must remain closed and are set to be reviewed on August 1.

The Government said shielding advice remains in place for the entire area of Leicester, including where restrictions have been eased.

It said the changes to measures follow a fall in the seven-day infection rate and the percentage of people testing positive for Covid-19, but warned they remained above the national average.

People were reminded to continue to socially distance, regularly wash their hands and self-isolate and get a test if they develop coronavirus symptoms.

Leicester’s mayor has slammed Matt Hancock for taking a ‘sledgehammer approach’ to the city’s lockdown and accused the government of ‘party political’ aims after restrictions were focused on areas run by Labour and the Lib Dems.

The Health Secretary announced last night that only schools and nurseries will be allowed to reopen from next Friday, July 24, with the rest of the city still facing a raft of limitations on their freedom.

Under the plans, councils would be given local powers to shut non-essential shops where necessary, pubs and restaurants will remain closed, and restrictions on non-essential travel and only having social gatherings of up to six people will remain in force, pending another review in a fortnight.

In an urgent statement to the House of Commons, Mr Hancock said the coronavirus infection rate in the city is still too high for lockdown to be lifted.

Mayor Sir Peter Soulsby was critical of the decision to keep restrictions in force across the Labour-run city of Leicester and Liberal Democrat-controlled Oadby and Wigson. 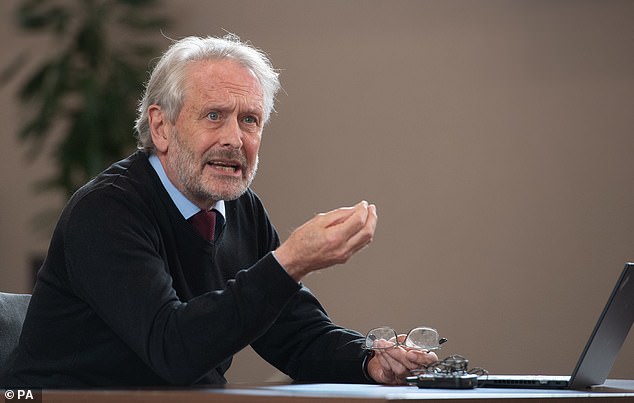 ‘They have left two areas in there – one that has a Liberal Democrat council, the other that has a Labour mayor.

‘The fact is they have focused in a way that is clearly party political and that’s not a way to deal with the virus.

‘Because right at the start of this, there were promises from the Secretary of State that there would be a financial package – compensation scheme – for our businesses that are being held back.

‘Now two weeks on, he’s still not delivering on that promise.

‘That obviously is a matter of great concern to me and those who care about the future wellbeing of this city.’