A primary school has told parents they must pick up their children by 3pm or face being reported to police and social services – sparking a fierce online debate.

Marsden State School in Logan in south-east Queensland on Thursday threatened to call authorities if parents routinely left their children hanging around school grounds 30 minutes after home time without prior approval.

‘All students must be collected by 3pm,’ the school said in a notice addressed to parents. 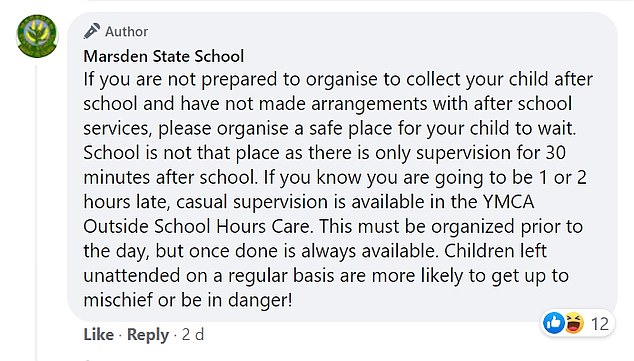 Pictured: Marsden State School’s Facebook post and follow-up comment on the problem of students being left at school long after classes end.  One parent said it was ‘a bit rough threatening child services’

‘Parents of students left regularly on school grounds after 3pm without prior contact to the office may be reported to the police and child safety,’ the post on the school’s Facebook page added.

‘The office is not an after-school child minding service.’

Marsden State School teaches about 1,170 students up to the age of 11.

One mum called the primary school’s latest post ‘alarming’, while another said it was ‘a bit rough threatening child services’.

‘You should look up the legalities before making threats,’ one parent wrote.

‘It’s not illegal to leave your kids unattended.’

‘An hour or so after school unattended wouldn’t be something that needs reporting to police or child safety, just leave the kids to wait in the pick up zone quietly.’

But another parent replied, ‘this isn’t the first post [about this], so it keeps happening.’ 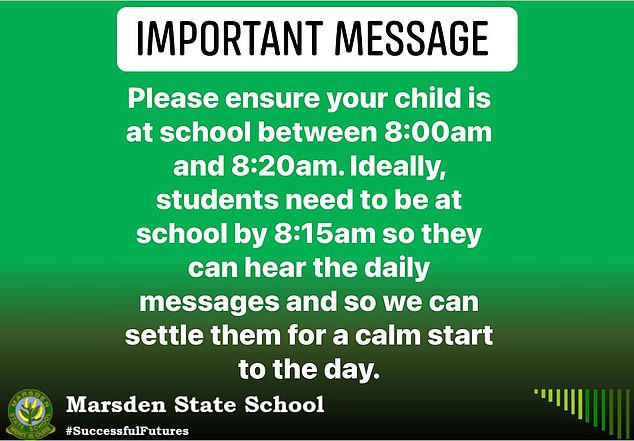 On the same day Marsden State School warned about children being left at school after teaching hours ended, it also reminded parents of the need to get kids to school before the scheduled start time ‘so we can settle them’

‘I don’t think there is anything wrong with being strict about the child’s well being, there’s rules. Not hard to follow.’

In the same thread, the school followed up with a suggestion to arrange casual supervision with the local YMCA, ‘If you know you are going to be one or two hours late’.

Shortly after the post about picking up children, officials also warned parents about school start times – triggering complaints about the drop-off zone.

The school said parents also needed to get their kids to school grounds before 8.20am ‘so we can settle them for a calm start to the day’.

‘It is best to aim for 8.15am to avoid rushing, upsets, missed messages etc. Children are LATE at 8.30am,’ the school posted.

Some parents complained how difficult it was to get their kids in by 8.30am because of parking.

‘Getting to school on time is difficult you’ll get there early and spend up to 20mins looking for a park thus resulting in having to get a late note,’ one parent said.

Another added, ‘this is us constantly, it is so frustrating’.