Britain is set to face an icy blast this week with experts predicting four inches of snow and sub-zero temperatures as freezing 70mph gales hit the country.

The Met Office today issued a yellow weather warning for snowdrifts later this week – with the chance of travel chaos and power cuts due to extreme weather.

Up to four inches of snow is expected to fall across much of South, East and central England from 9pm on Tuesday until midday Wednesday.

Forecasters said air blown 2,500 miles from near the North Pole will bring the most low-level snow of Britain’s winter so far.

The Met Office today a issued yellow weather warning for snow across Tuesday and Wednesday in Southern, Eastern and some parts of central Britain 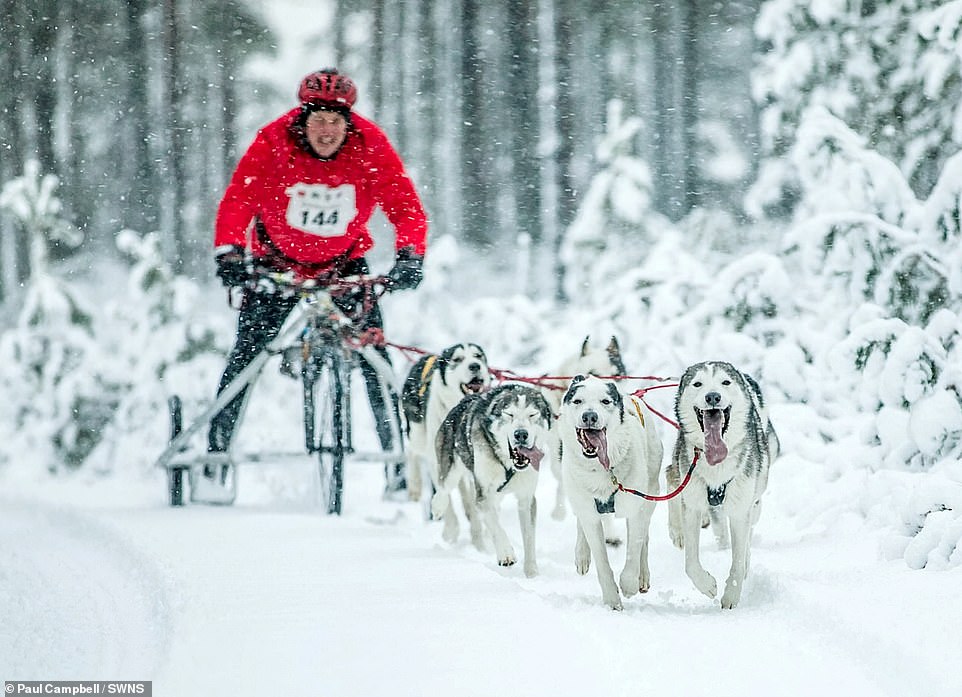 Alpine scenes from the annual Siberian Husky Club race at Aviemore, Scotland as a yellow warning is put in place for snow and ice over Britain

The Met Office also warned there is a small chance of power cuts and disruption to mobile phone services across the southern half of England.

There is also a chance some rural communities ‘could become cut off’ due to extreme weather in the coming days.

Strong north to northwesterly winds were expected to develop this morning across North east England – with gusts of 60 to 70mph predicted along the coast. The winds will move south into Eastern England throughout the afternoon.

The Met Office said: ‘Staying cold, with potential for disruptive snow in central and southern areas Tuesday into Wednesday, then perhaps more widespread rain and snow on Thursday.

An RNLI boat ahead of huge waves which batter the breakwater at the Holyhead breakwater, Angelsey, North Wales, this afternoon 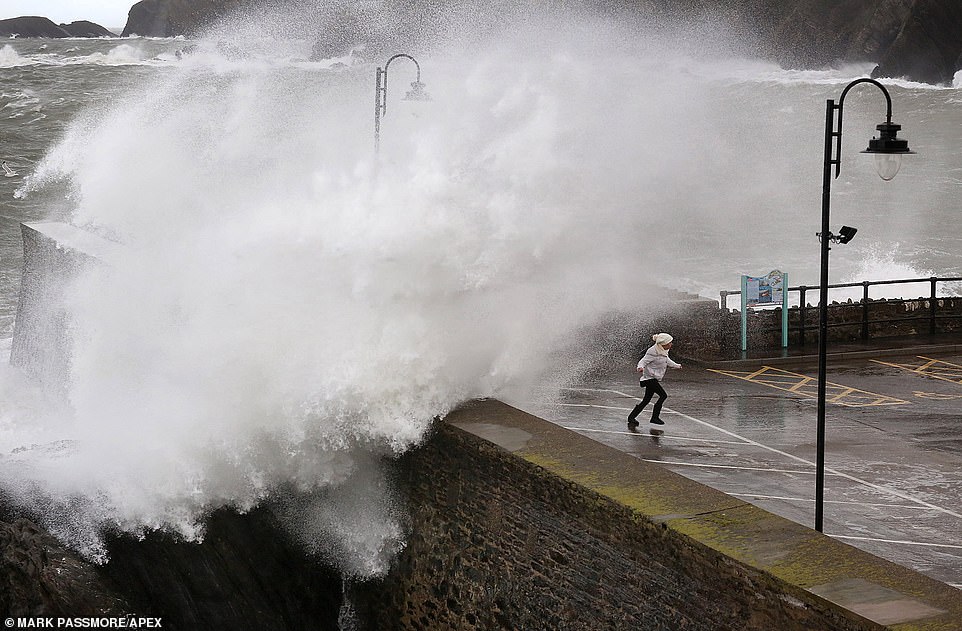 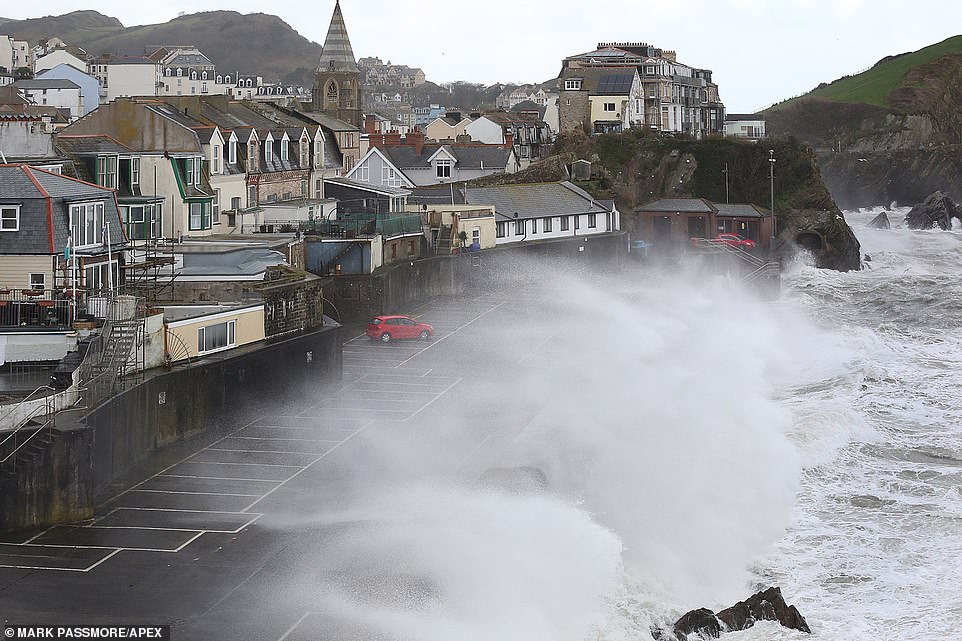 Up to four inches of snow will fall as snowdrifts move across much of South, East and central England from 9pm on Tuesday until midday Wednesday (pictured, Ilfracombe in Devon)

‘Some severe overnight frosts too.’

A yellow weather warning was also in place for snow and ice in Scotland today, with strong northerly winds expected lead to blizzard conditions over high ground.

Heathrow Airport has 185 snow ploughs on standby and Gatwick has 98 snow ploughs and snow-blowers ready for cold weather later this week.

Some 2,000 gritters are digging into a three million tonne salt mountain and Network Rail has 34 de-icing trains prepared for the upcoming weather.

Government weathermen said snow showers are due in the north east and north west as early as Monday, with ‘more widespread’ rain and snow from Wednesday in the north. 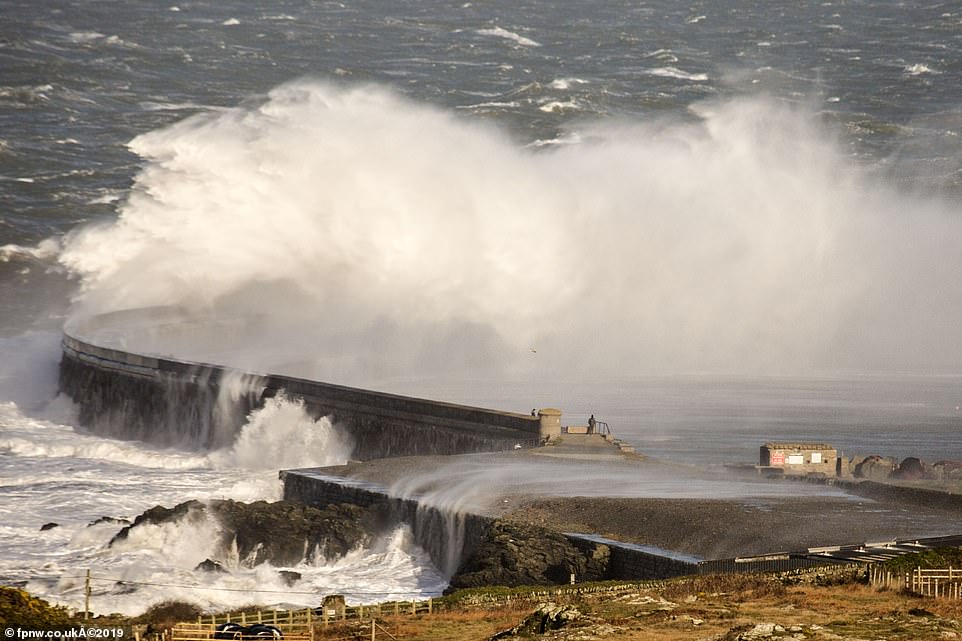 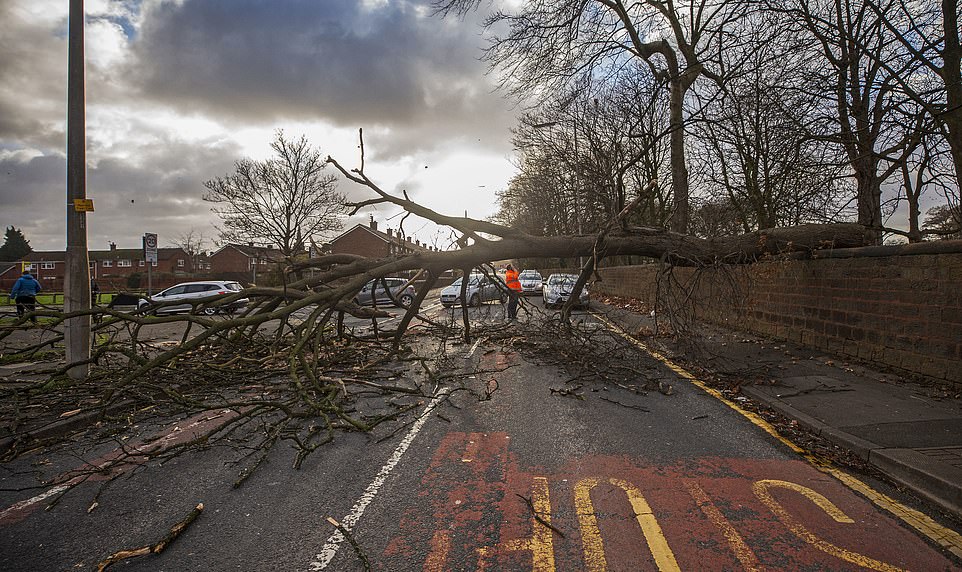 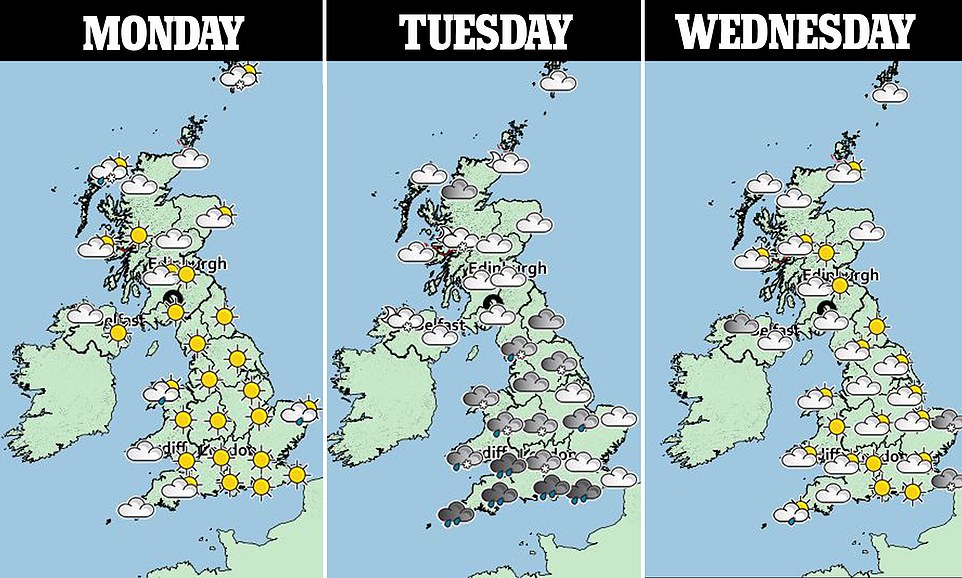 Forecasters said air blown 2,500 miles from near the North Pole is set to bring the most low-level snow of Britain’s winter so far 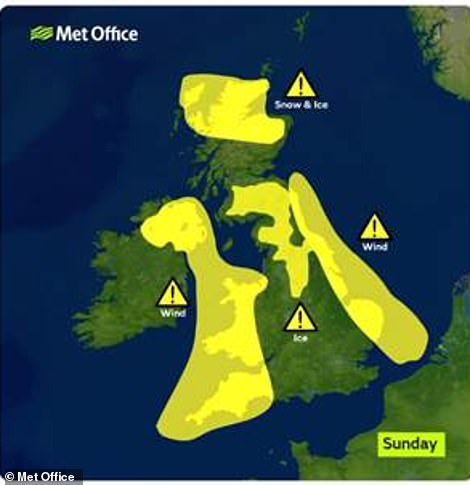 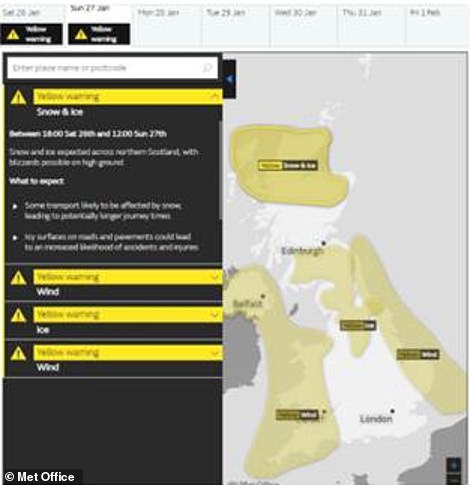 The Met Office has issued a number of weather warnings across the country for today. A yellow warning was issued for the eastern coasts, while northern Scotland has been issued with a snow and ice warning (left and right)

Temperatures as low as -6C are expected in England this week with lows colder than -14C forecast in parts of Scotland.

Forecaster Simon Partridge said: ‘A cold week ahead started on Sunday with a straight northerly, with air coming all the way from north of Greenland, near the North Pole.

‘Snow is likely to lower levels at times, perhaps moreso than during cold weather so far. 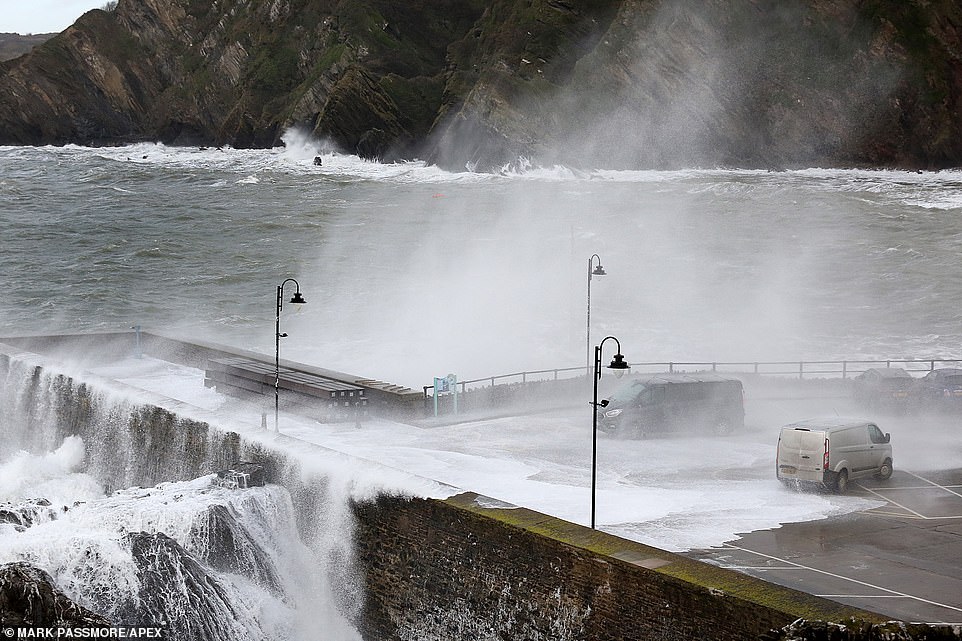 Icy gales of up to 70mph were predicted along the coast of parts of England today, with large waves expected on shorelines 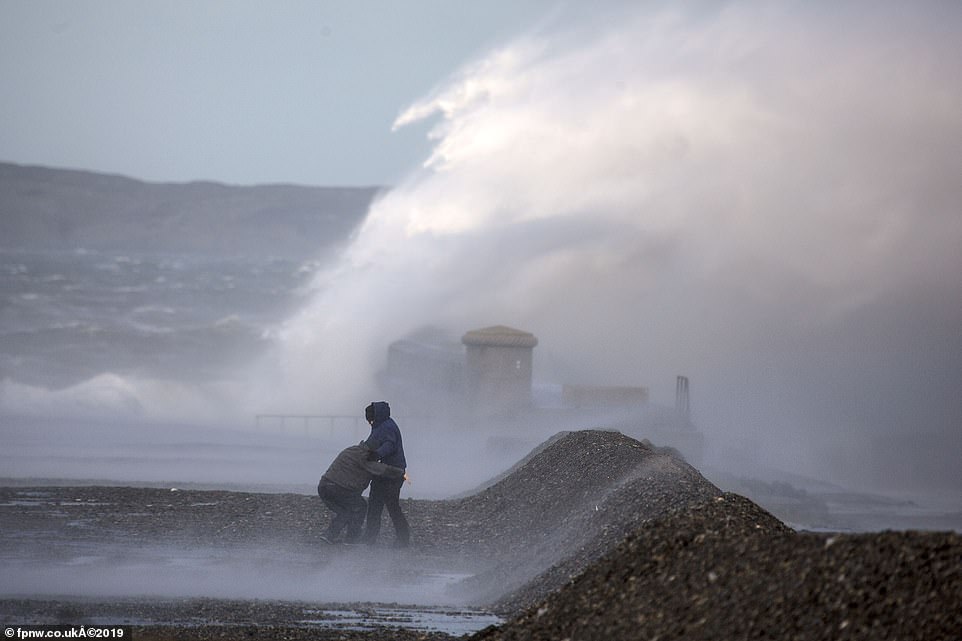 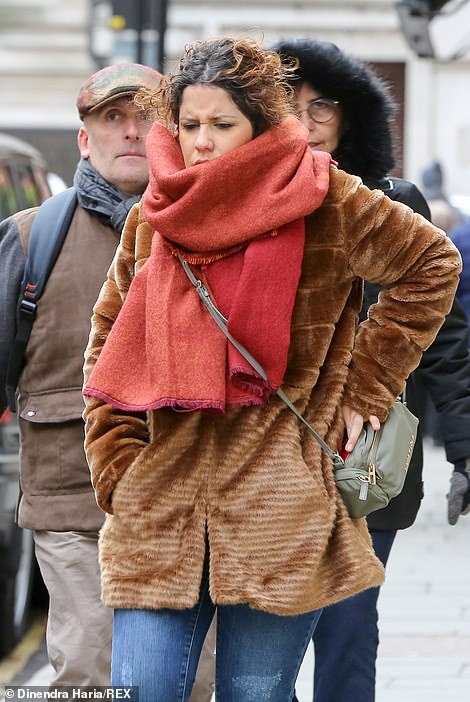 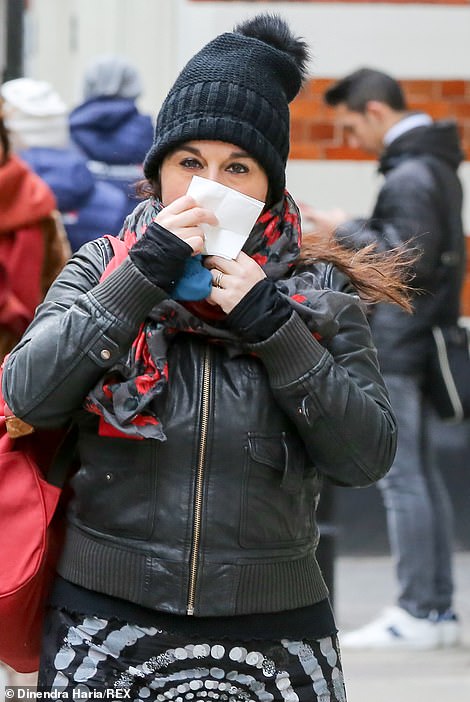 Two women are wrapped up in thick coats, hats and scarves as they walk through London ahead of a week of predicted snow 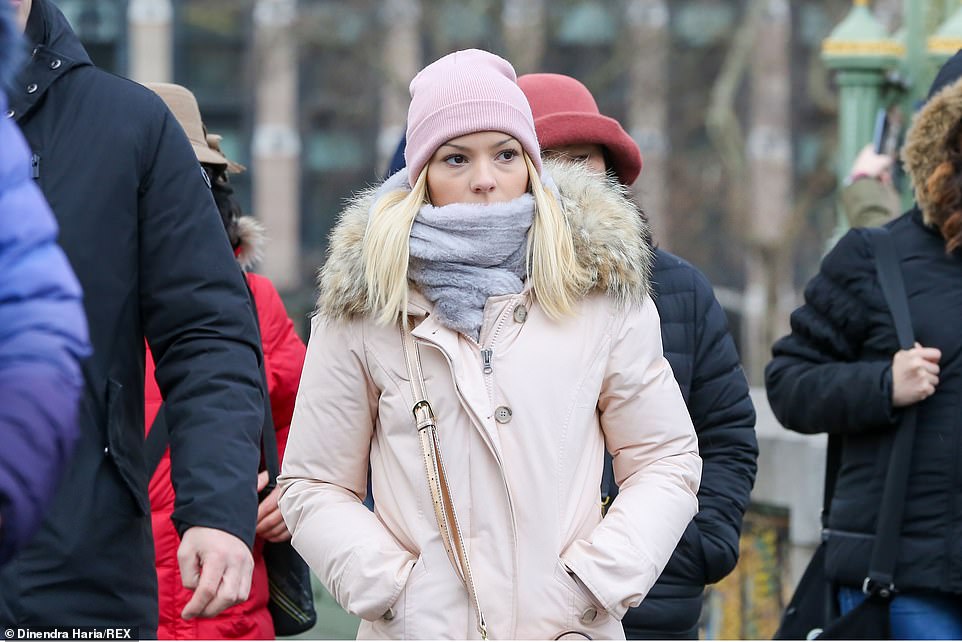 ‘-10C is certainly possible each night from Sunday for most of the week over lying snow in Scotland. We’ll have to wait to see if we get -11C. England could see -6C.

‘Wintry showers may fall on Monday and Tuesday near north east and north west coasts. Tuesday sees a snow risk over the southern half of the UK.

‘Wednesday has wintry showers in the north west, with further snow from Thursday in the north.

‘It stays cold certainly until mid-February, with the risk of snow and ice and the chance of easterly winds.’

‘A wild and wintry week ahead will see blustery wintry showers flood back down from the north and ongoing ice. 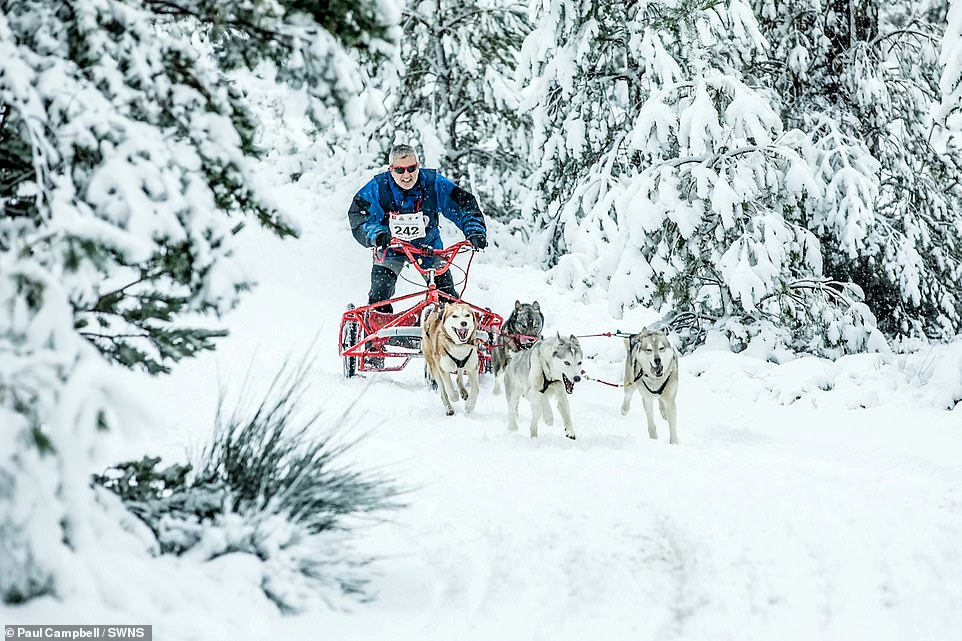 Britons are bracing for sub-zero temperatures, widespread frost and winds of up to 70mph over the next 48 hours, the Met Office said

‘Northern parts are most likely to see heavy snow later in the week.

‘We may be subject to further bombardments early in the following week, bringing threats of heavy rain and snow, before bitter easterly winds take control through much of February eventually.’

By Monday the country can expect to see sharp frosts overnight, with wintry showers and the possibility of rain and snow predicted across the country for Tuesday and Wednesday morning.

Freezing weather proved a good thing for one group of hardy curling fans, who were able to follow their passion outdoors. 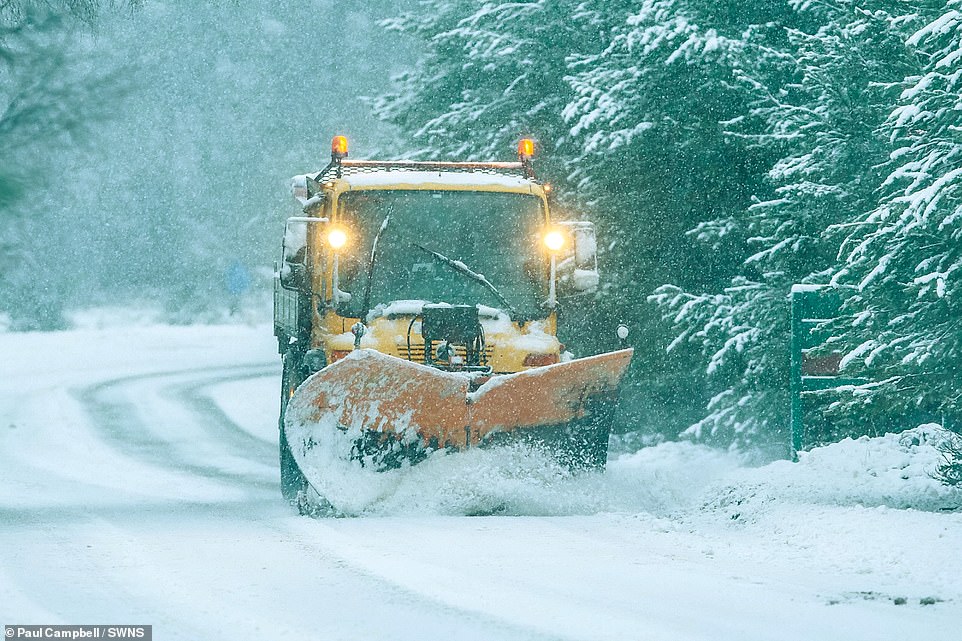 Snow ploughs attempt to clear heavy snow above Aviemore as it continues to fall in the Cairngorms National Park, Scotland 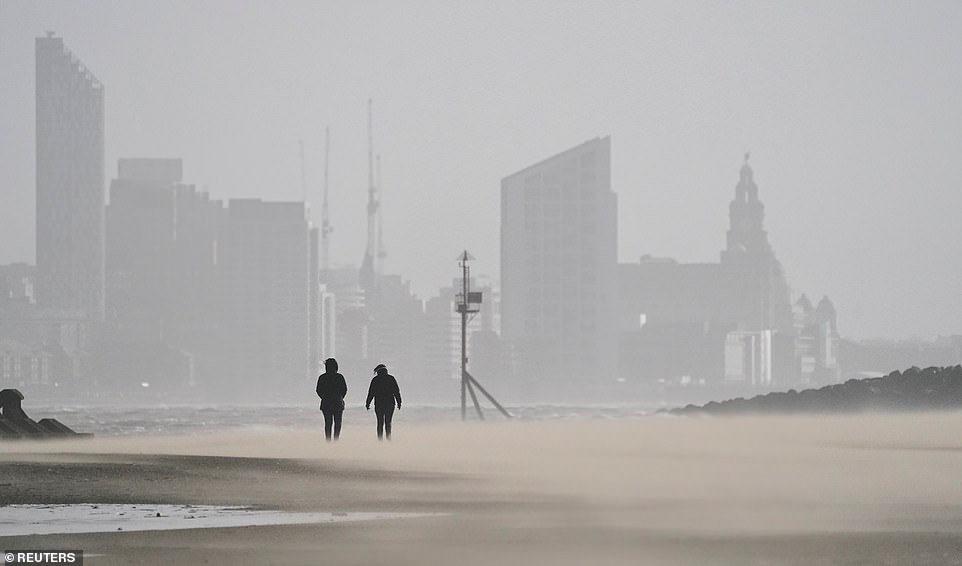 By Monday the country can expect to see sharp frosts overnight. Pictured: People brave strong winds as they walk along the beach at New Brighton 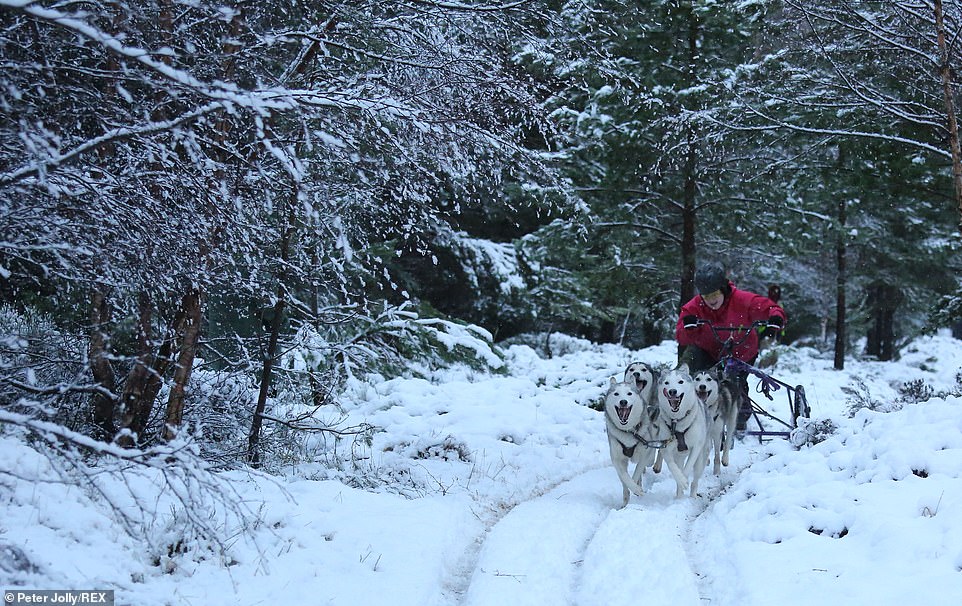 Pictured: Husky racing at Glenmore in the Highlands where the competitors were enjoying the snow covered race track

Members of the Glenesk Curling Club took advantage of the sub-zero temperatures, which dipped to as low as -12C and froze standing water solid, to hold the event on their frozen pond on Thursday evening – their first outdoor game in five years.

The peace and tranquillity at Tarfside, Angus, Scotland, was broken when those who enjoy the ‘roaring game’ took to the ice in the event.

The hardy curling fans taking to the ice comes as the Met Office issues a number of different weather warnings across the country.

Now fans of the sport from around the world are in raptures after seeing their favourite pastime in a natural environment. 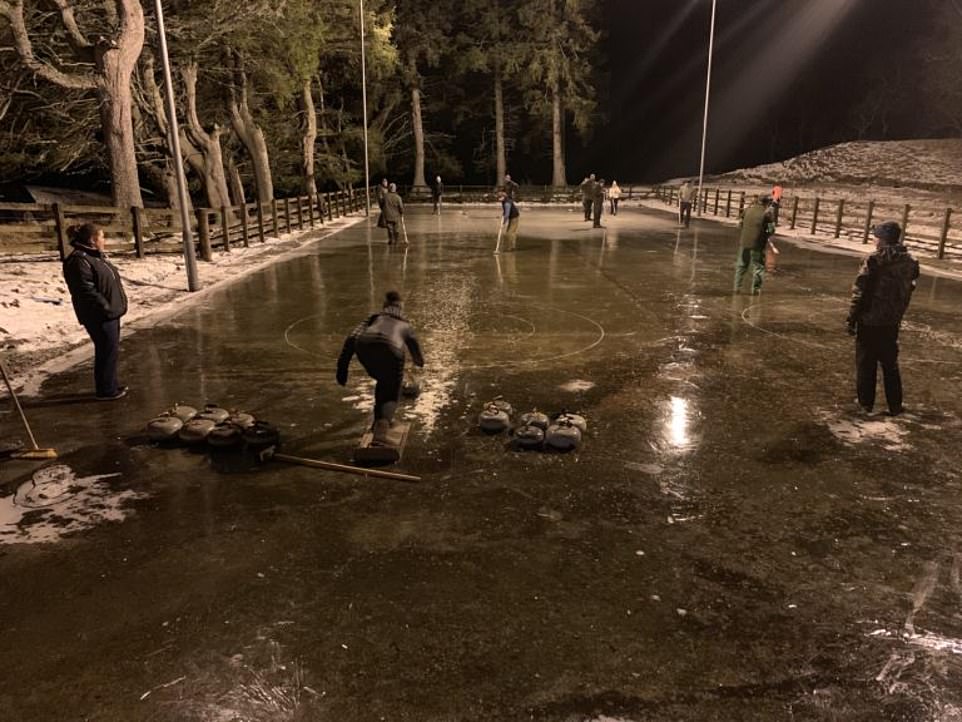 Hardy curling fans from the Glenesk Curling Club in Angus, Scotland, held their first outdoor game in five years as temperatures dipped to as low as -12C

A video posted on social media has been viewed by thousands including followers in Canada, Korea and China.

‘It is not very often we have these conditions, the last time we did this was about five or six years ago.

‘If we hadn’t caught it last night I very much doubt if it would be played today. It just needs a bit of rain or snow to ruin the ice.

‘You have to grab these opportunities when you can.

‘We posted some video and it has gone viral.’ 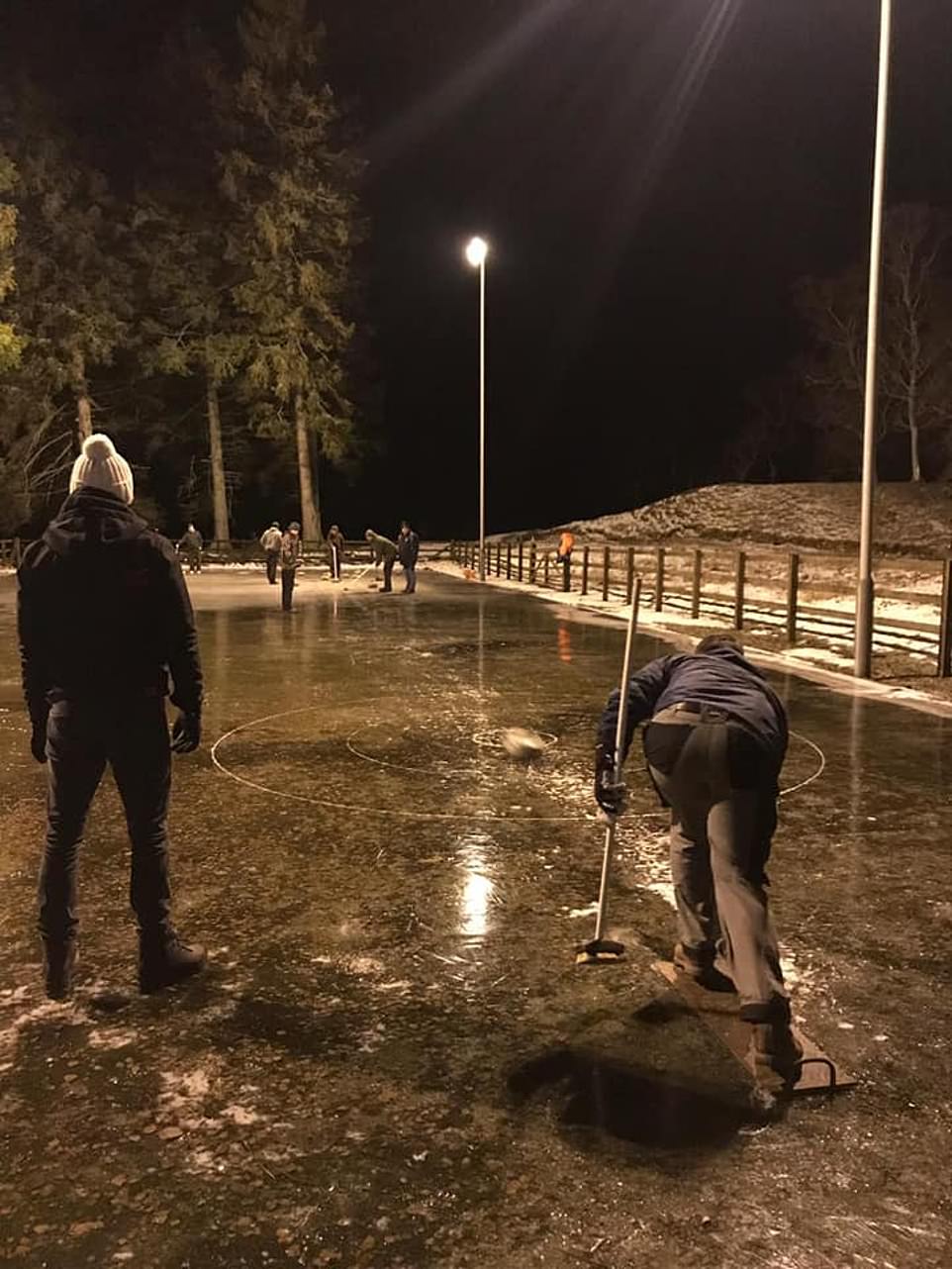 Enthusiastic members of the curling group took to the ice in Tarfside, to enjoy their favourite pastime in a natural setting 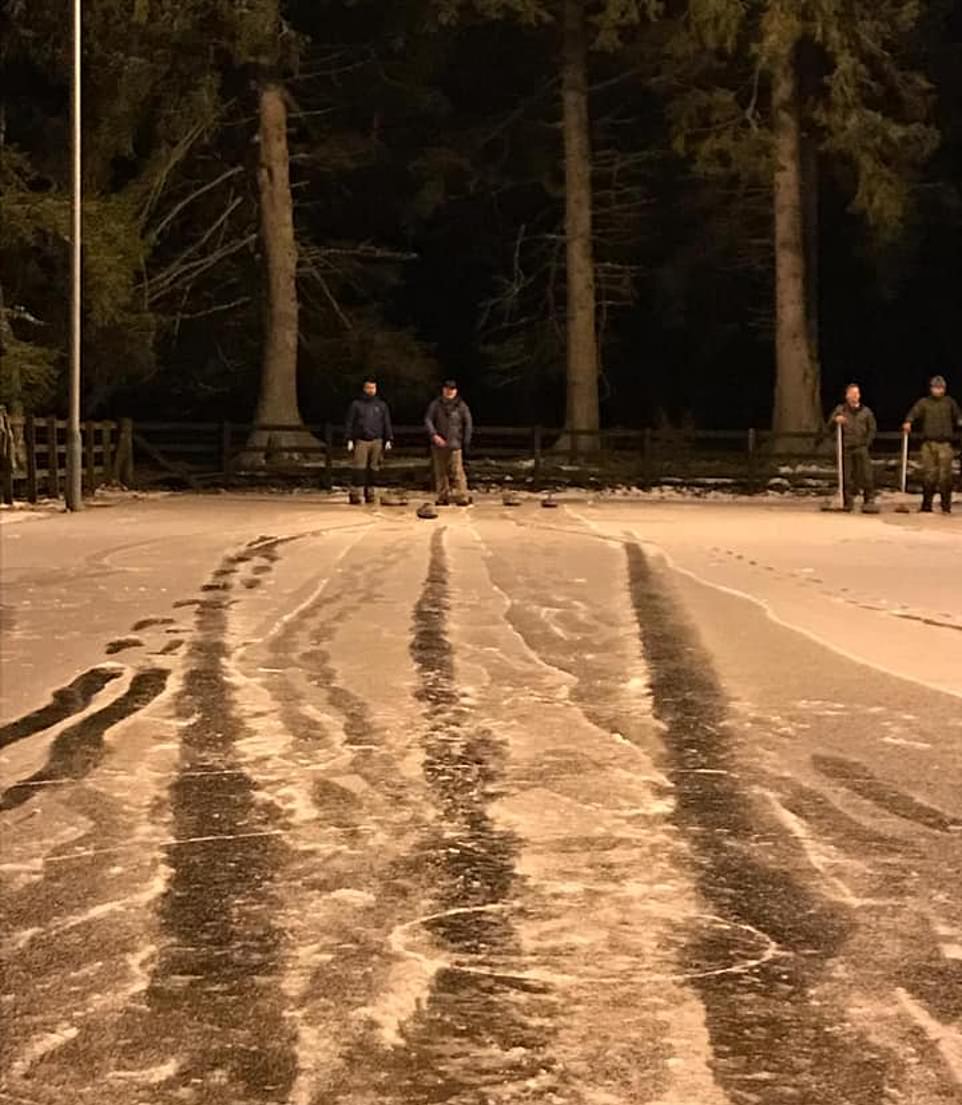 Members of the club made the most of a small window of opportunity, flooding the two rinks on the pond with water to allow the games to be played under the floodlights.

Snow later came down, meaning the game was halted to protect players’ safety and temperatures later rose, melting the ice.

Mr Ferguson continued: ‘In true tradition the call went out within the local curling world.

‘We also had a lot of local gamekeepers, many of whom hadn’t curled before.

‘We also had young curlers who took part in their first outdoor curling event.

‘It was a really sociable affair and it was good to be able to pass it on to the next generation.’

The Met Office said cold conditions could ‘certainly’ continue for another three weeks at least.