London and Liverpool go into Tier 2

London and Liverpool have been placed in Tier 2 of Boris Johnson’s new coronavirus lockdown regime – but Manchester, Hull, Newcastle, Birmingham and Wolverhampton face going into Tier 3.

The decision to save the capital from the most brutal restrictions will be a relief to many in the hospitality industry, which will be able to reopen to some extent when the current national lockdown ends on December 2.

But the Prime Minister has chosen to impose Tier 3 on huge swathes of the country including five major cities and all of Kent – putting a wrecking ball through pubs, restaurants and clubs now forced to close.

As Tory MPs threaten to mutiny in a key vote on the plans next week, it emerged that only Cornwall, Scilly and the Isle of Wight have been put into the loosest Tier, which allows socialising inside homes and pubs subject to the Rule of Six.

Millions of people will be banned from socialising indoors with other households apart from five days over Christmas.

Coronavirus cases are falling quickly in more than two-thirds of London boroughs – and appear to be stalling in the rest. Liverpool has also run after a successful campaign to control its outbreak after mass testing in the city.

Health Secretary Matt Hancock formally unveiled the breakdown of areas in the Commons after days of wrangling, saying the country has to stay ‘vigilant’. He also defended the criteria being used amid complaints that they are too vague and amount to ‘finger in the air’.

But amid shambolic scenes the government set an online postcode checker live beforehand.

As residents, journalists and MPs scrambled to gather the news on what decisions had been taken, the website then promptly crashed under the weight of traffic.

Tier 3 means that millions of people would face a ban on households mixing indoors and outdoors, and pubs will be only be able to provide takeaway service or must close altogether.

The Prime Minister has put most of England in Tier 2 and Tier 3 despite being told it was ‘hard to justify’ when cases are now falling in every region of the country. 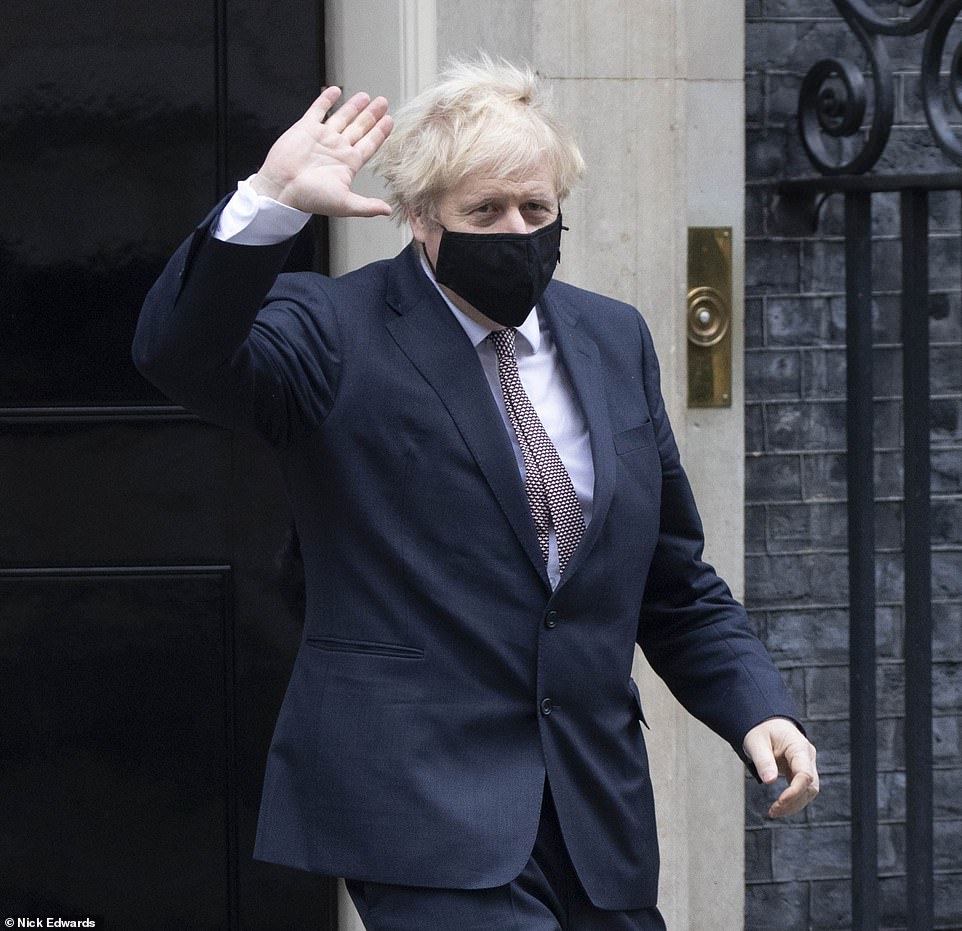 The Prime Minister, who will hold a press conference this evening, told Conservative MPs last night that the new measures were going to be ‘very tough’ with most of England set to be placed in Tier 2 or 3 despite cases dropping across the board

The onerous tiered system will be in place across England from December 3 until the end of March, the Prime Minister said

Government sources said that ‘at least one’ of the cities which had been in Tier Three would fall into Tier Two, with most indications pointing to the Merseyside city after a dramatic drop in infection rate from 162 per 100,000 compared with 700 five weeks ago.

The revised Tier 2 restrictions shut pubs unless they serve meals and order people not to meet other households indoors.

Greater Manchester, where Labour mayor Andy Burnham fought a bitter battle with the government against going into tough restrictions, looks set to remain in Tier Three. That means a ban on the entire hospitality industry as well as meeting other households apart from in public spaces.

‘That said, things are obviously not normal and I can’t pretend that next week things are going to feel like they were before the spring.’

The Prime Minister, who will hold a press conference this evening, told Conservative MPs last night that the new measures were going to be ‘very tough’.

But he is braced for a massive backlash from his own benches, amid anger that the measures will destroy thousands of businesses, amount to ‘lockdown by another name’, and the criteria used to make decisions are too ‘finger in the air’.

Ministers have tried to cool the tensions by stressing that the tiers will be reviewed every two weeks, with the first due on December 16.  This holds out a prospective carrot that restrictions could be eased even before the ‘Christmas Bubble’ relaxation on December 23. 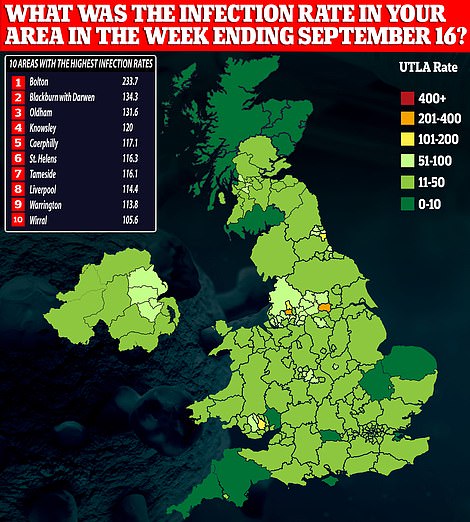 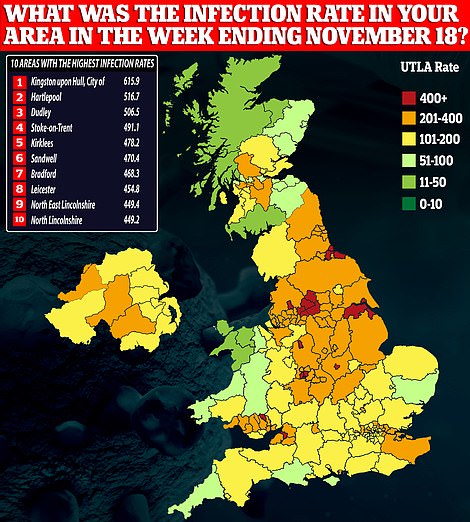 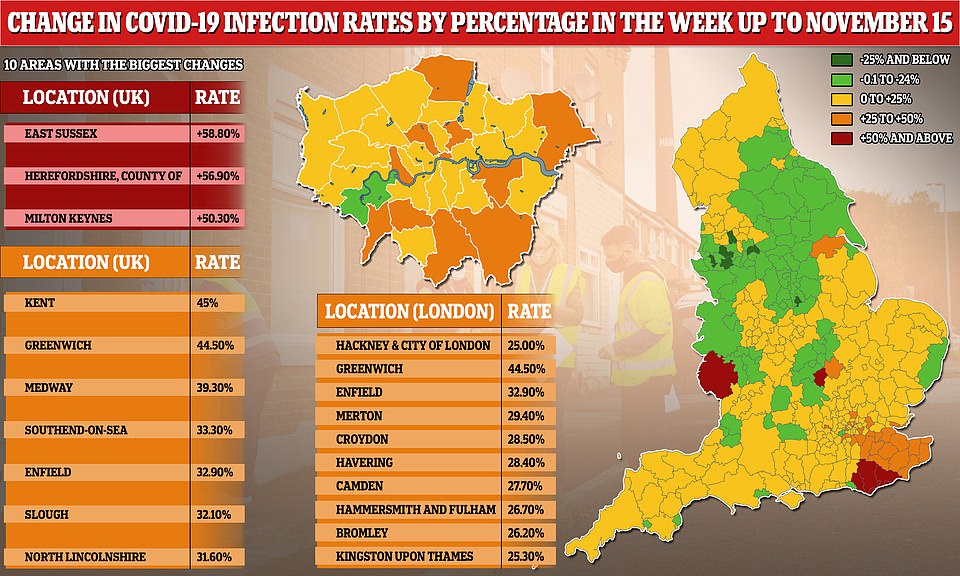 Liverpool Mayor Joe Anderson said the virus has been brought back under control in the city, adding that it is now ready for Tier 2.

He told BBC Radio 4’s Today programme this morning there have been no conversations about what tier the city will be in, but added: ‘I think the figures and the data justify Liverpool being at least, at least, in Tier 2.’

Asked if he would encourage other areas that are put in Tier 3 to put up with the restrictions, Mr Anderson said: ‘Yes, absolutely, because it’s about saving lives. There’s no question that the action that we’ve taken in Liverpool has saved lives.

WHAT ARE THE NEW TIER RULES?

Tier One will be the default and measures will not be allowed to get more relaxed in any part of England:

Tier Three will be the toughest level of restrictions and rules have been tightened up to make them stricter than before. All of the Tier Two rules apply as well as the following:

‘That’s what national government and local government should be about. It’s protecting your people and saving lives.’

But Greater Manchester mayor Mr Burnham tweeted: ‘Places put into Tier 3 today will get no additional business support funding than those in Tier 1 or Tier 2. Can that possibly be fair? #LevellingDown.’

A study published yesterday found the previous Tier One was ‘clearly inadequate’ last time around – only one area out of the 169 previously under these rules saw a fall in cases.

There are signs that the only regions in the lowest level could be isolated parts of eastern England and rural Cumbria and Cornwall, where the Rule of Six will still apply.

The tiered system will kick at the end of national lockdown on December 2 – but the measures go further than the previous regime, meaning Tier Three is effectively a transition into full lockdown.

Areas which make progress in slowing the spread of the virus could still be moved down a tier before Christmas, however, with the first review of the allocations due to take place by December 16.

The key decisions on lockdown levels were made at a meeting of the Covid O committee last night, led by Mr Johnson and Mr Hancock. They will be rubber-stamped by the Cabinet before Mr Hancock makes a statement to the Commons.

It comes after leading Oxford University academic Carl Heneghan said areas placed into the strictest Tiers 2 and 3 could be in a ‘very different position’ next week.

Professor Heneghan, an epidemiologist, said if rates continue to fall ‘it will be hard to justify tougher tiered restrictions’.

Instead, there should be clear criteria which decides whether areas face the strictest measures.

He insisted: ‘By the time we get to December 2 we will be in very different position than we are now, therefore we need to be much more flexible and reactive, and set out clear criteria.’

He told MailOnline: ‘There is no point in saying to people ‘this is where you are now [in terms of Covid] and you’ll be in this tier next week’.

‘We should be explaining to people the two important criteria that should decide which areas go into which tiers – symptomatic cases and hospital rates.

‘For instance, say Kent is announced to be in Tier Three and it has 50 per cent of hospital beds occupied by Covid patients, you could tell people they have to adjust that to 30 per cent to come out of Tier Three. That’s objective criteria.’

His warning came as the UK recorded its highest daily virus death toll since the beginning of May.

Official data showed 696 deaths were confirmed yesterday. This is the highest since 726 deaths were reported on May 5.

Speaking to a restive 1922 Committee of his backbench MPs last night, the Prime Minister said: ‘I see us steadily making progress over the next four months. They will really erode the ability of the virus to do damage to our population.’

Economic forecasts put forward by the Treasury watchdog, the Office for Budget Responsibility, have worked on the basis that ‘high to medium’ measures – Tiers 2 and 3 – will be in force until the middle of next year.

But the Prime Minister told his MPs he didn’t agree with their ‘gloomy prediction,’ The Telegraph reported, and believed that vaccines would haul Britain out of the mire before then.

Mr Johnson compared the mass testing and vaccine programmes to ‘steadily starting to insert graphite rods into a nuclear reactor’.

Nonetheless, there remains serious upset on the Tory backbenches over the tier system.

Jake Berry, of the Northern Research Group of Tory MPs, said: ‘We repeat our call for a clear route out of the tiering system and to make sure that the North does not get stuck in a Hotel California lockdown where we can enter Tier Three but never leave.’

Mr Hancock said: ‘Thanks to the hard work and sacrifice made by people up and down the country, we are able to move out of national lockdown and into more targeted local, tiered restrictions.

‘I know for those of you faced with Tier 3 restrictions this will be a particularly difficult time but I want to reassure you that we’ll be supporting your areas with mass community testing and extra funding.

‘By following the rules together we can get out of these tough measures.’

The Department of Health said decisions on tier levels would be based on a number of factors, including case detection rates in all age groups and, in particular, amongst the over 60s. 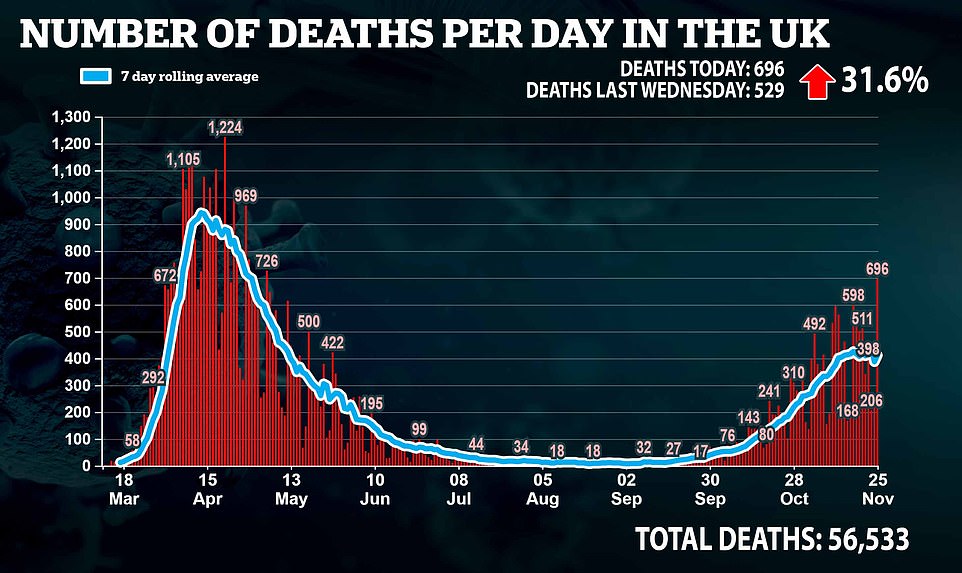 Official data showed 696 deaths were confirmed yesterday. This is the highest since 726 deaths were reported on May 5 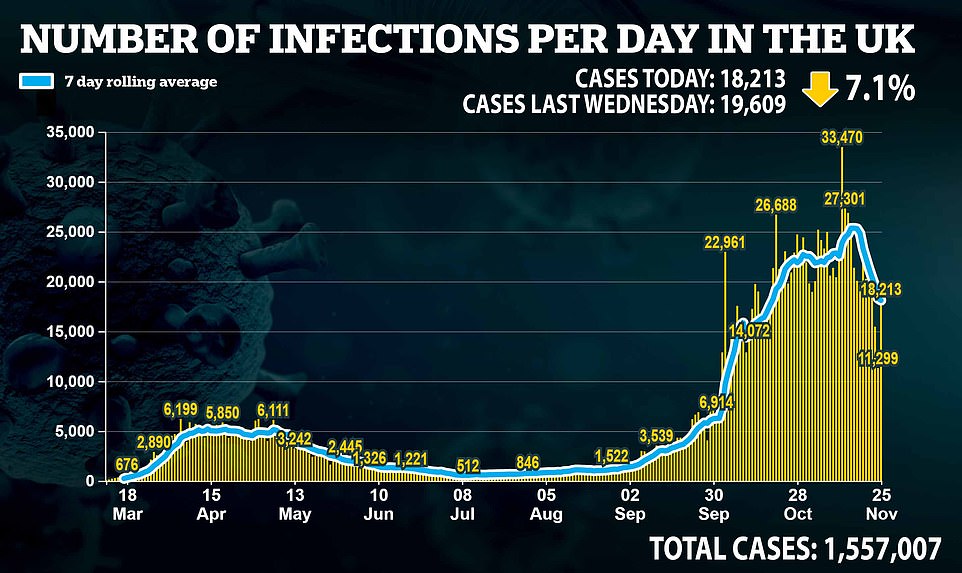