Yorkshire and London are the worst areas for covidiots in the country it has been revealed – as police issued more than 14,000 fines for lockdown breaches.

Of the 43 regional police forces in England and Wales, the Metropolitan Police issued the highest number of fines with 906.

This was followed by Thames Valley Police, with 866, and North Yorkshire, with 843. Warwickshire issued the fewest, with just 31.

The fines were all handed out before lockdown regulations were relaxed in England from Wednesday.

Of the 43 regional police forces in England and Wales, the Metropolitan Police issued the highest number of fines with 906

In addition, 80 per cent of the fines were issued to men and over half were to people under 30.

The figures run from March 27 to May 11. There have been 862 repeat offenders,  including one person who was fined nine times.

It comes as dozens of people have been wrongly charged by police under new coronavirus laws, the Crown Prosecution Service (CPS) has admitted. 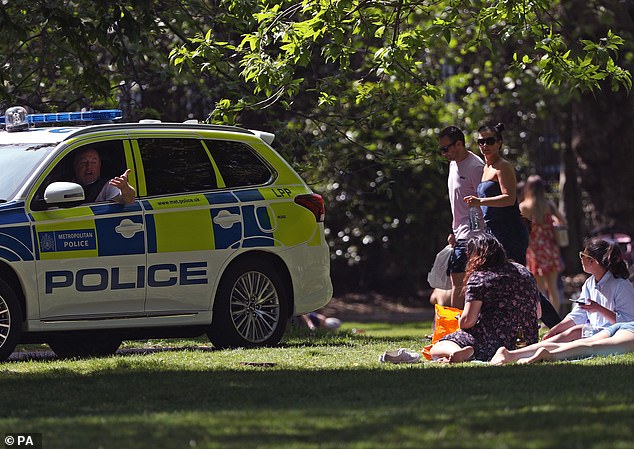 Yorkshire and London are the worst areas for covidiots in the country it has been revealed. Pictured: police in Greenwich Park, London this week

All 44 charges brought under the Coronavirus Act in the first 237 cases to be examined by the CPS were incorrect.

Prosecutors found there was no evidence that these cases involved potentially infectious people, which is what the act was designed to cover.

And 12 charges under the Health Protection Regulations 2020, which give powers to break up gatherings and fine people breaching restriction of movement rules, were also wrong.

Kirsty Brimelow QC, a barrister at Doughty Street Chambers lambasted the police over the findings.

She said: ‘The CPS has displayed strength of leadership in carrying out this review.

‘But the results are a shocking reflection of poor leadership and guidance by police chief constables, some of whom very publicly encouraged over-zealous policing by misstating the law.

‘In turn, the chief constables acted on the messages from politicians rather than focusing on making the law clear to the police on the street.’ 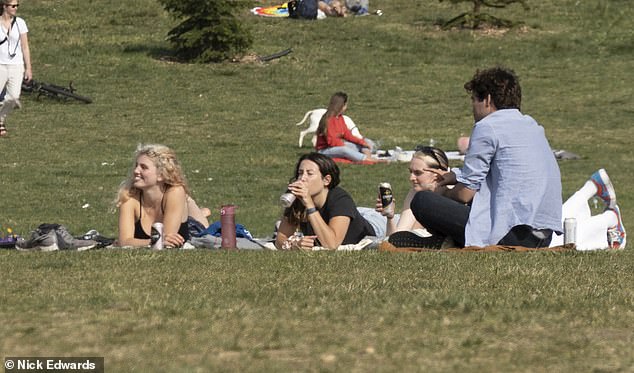 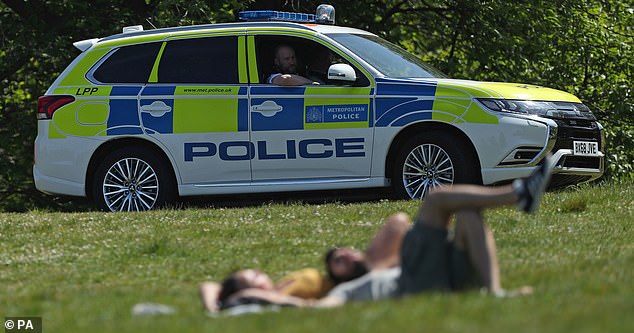 Police have been patrolling popular spots including Greenwich Park, above, as people go out to sunbathe or have picnics

Health Protection Regulations charges relate to people flouting lockdown rules by gathering in groups or by being outside without a reasonable excuse.

The main criminal offence under the Coronavirus Act relates to people who are potentially infectious people and refuse to co-operate with the police or public health officers.

The figures come following a CPS review of all 231 police charges under coronavirus legislation in England and Wales up to the end of April, where the prosecution has either been stopped or ended in a conviction.

Asked if he was worried some of the errors went entirely unnoticed as cases went through the courts, and led to wrongful convictions, CPS service director of legal services, Gregor McGill, said: ‘I apologise for the CPS role in that. Where we get things wrong, it’s right that we do apologise for that, because there is quite rightly an expectation that we will get things right.’

He added: ‘Under the regulations, the vast majority, that’s 175 out of 187, have been charged correctly.

‘And these included people driving from London to Leicester for a party, groups drinking and misbehaving in the park and other groups hanging around the town centre after being asked to go home by police on several occasions. 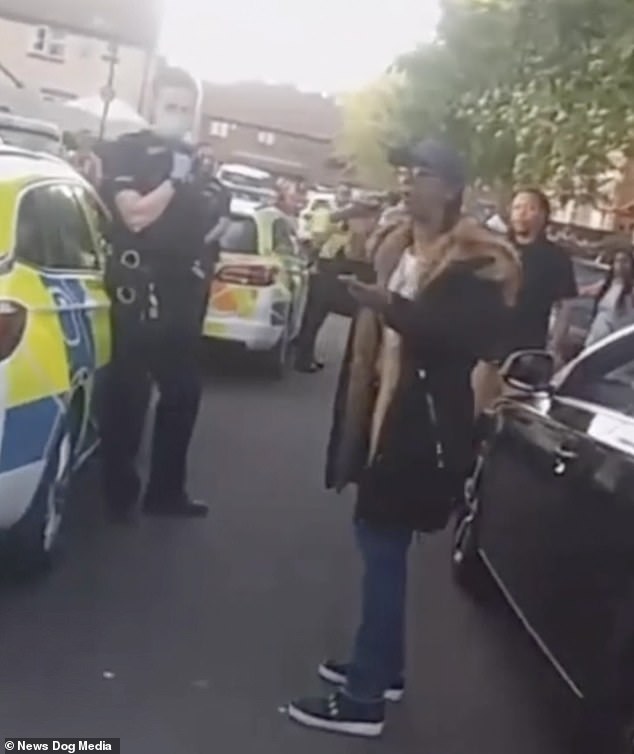 Police have been dealing with people flouting lockdown rules since the end of March, last week Nottinghamshire Police issued fines at a VE Day street party that got out of hand

‘Where mistakes were made, it was usually because Welsh regulations were used in England, or vice versa.

‘Under the Act, all 44 charges were incorrect because they did not cover potentially infectious people, which is what the legislation is intended for.’

What’s the difference between Coronavirus Act and Health Regulations?

The main criminal offence under the Coronavirus Act relates to potentially infectious people who refuse to co-operate with the police or public health officers, when they are required to be screened for COVID-19.

There have been no prosecutions relating to a potentially infection person refusing to comply with lawful instruction, CPS say.

But Health Regulations apply to anyone not obeying lockdown rules.

The legal test under the Regulations is whether someone has a reasonable excuse for being outside their home, which includes going to work, exercising or caring for the vulnerable.

He said 38 of the 44 charges had been brought alongside other offences, including assaults on emergency workers, theft and burglary, while 31 of the wrongful charges were withdrawn in court, with 13 wrongful convictions returned to court to be withdrawn.

Of those 13, some 11 were substituted with charges under the regulations.

Mr McGill described the ‘immense pressure’ on police and prosecutors as the new laws came into force within 72 hours.

But he added: ‘I don’t want that to seem like I’m dismissing the concerns, I am concerned, there’s an expectation that we should get things, and that’s absolutely right, and where we don’t we should apologise, be open and transparent about what’s gone wrong, and be open and transparent about what we are doing to try and make sure it doesn’t happen again.’

It comes as the National Police Chiefs’ Council said more than 14,000 fines have been issued for flouting Covid-19 lockdown rules.

Provisional data released on Friday shows 13,445 fixed penalty notices (FPNs) have been recorded by forces in England between March 27 and May 11, while 799 were issued in Wales in the same period – a total of 14,244.

The fines were all handed out before lockdown regulations were relaxed in England from Wednesday, with penalties set at £60, reduced to £30 if paid within two weeks – with the fine doubled for each repeat offence up to a £960 maximum. 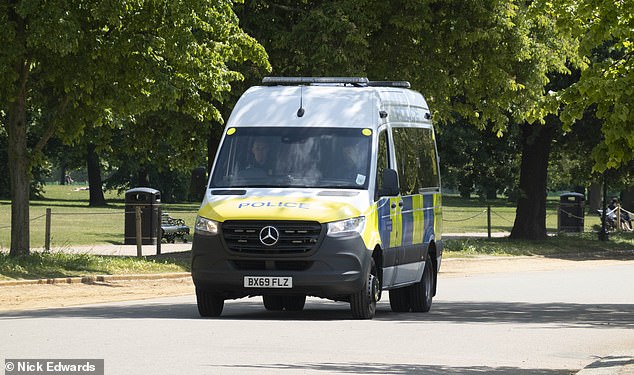 Police continue to patrol open spaces on Friday, including Hyde Park above, ahead of another warm weekend in the capital

How many fines have England’s police forces issued since March 27?

Here are the total number of fines issued by police forces in England between March 27 and May 11 for alleged breaches of the coronavirus lockdown laws:

Number of fines issued by police forces in Wales in the same timeframe:

Martin Hewitt, National Police Chiefs’ Council chair, said: ‘We do of course apologise if anybody ended up in court who shouldn’t have been there.

‘These were unprecedented circumstances in which officers were presented with new powers within days of them being announced.

‘This has all been done at pace and everyone in the Criminal Justice System has had to deal with a new body of legislation, which has undoubtedly led to some confusion.

‘We apologise for the mistakes but all parties have worked hard to manage this new legislation as effectively as they can and to keep the public safe.

‘It is right that any errors have been quickly identified and are being corrected through the CPS’s review process, and are also prevented by the additional safeguards now in place.

‘Officers have received additional guidance on the correct use of legislation. We will of course continue to apply learning as we move forward through the current health emergency.’

Earlier this week the NPCC and the College of Policing published new guidancesaying that two-metre distancing, avoiding public transport and the wearing of face coverings in enclosed spaces were not legally enforcable.

By contrast, two metre social distancing ‘is enforceable’ by police officers in Wales, the advice says. But Welsh councils, not police forces, are responsible for making sure there is social distancing in workplaces, it adds.

Referring officers to the updated law in England for more information, the notice reiterates: ‘People are still not allowed to leave or be outside of their homes without a reasonable excuse.

‘The regulations update the list of examples of reasonable excuses, but officers’ judgement and discretion are key – apply the four ‘E’s (engage, explain, encourage, enforce).’

Of the 43 regional police forces in England and Wales, the Metropolitan Police has recorded the highest number of fines, with 906, followed by Thames Valley Police, with 866, and North Yorkshire, with 843.

Warwickshire issued the fewest, with just 31.

Mr Hewitt added: ‘The vast majority of people continue to do the right thing, which protects the NHS and helps save lives.

‘The figures show our approach is proportionate with just 0.02% of the population in England and Wales being issued with a fine.

‘I want to thank people for continuing to follow the regulations – I recognise it’s not easy and that this is a challenging time for us all.

‘Our approach of – engage, explain and encourage, and only as a last resort, enforce – will continue. It is working across the UK. I urge the public to keep going, keep following the advice.

‘Officers are working hard to keep us all safe from the full range of crimes in what remain challenging circumstances so we would ask everyone to work with us and remember that if you need our help we are here for you.’

Raj Chada, head of the criminal defence department and a partner at firm Hodge Jones & Allen, said: ‘These figures are astonishing but not surprising. It has been clear from the outset that the legislation and rules were vague and incoherent, with guidance confused and inadequate.

‘The Government should have been clearer about what was prohibited and officers needed to be better trained to understand what powers they were using.

‘It was not so much engage, explain and encourage, but misunderstand, misapply and mistake.’