There are severe delays on the District Line between Earl’s Court and Wimbledon, alongside minor delays between Edgware Road and Earl’s Court, caused by a signal failure at Parson’s Green.

National Rail also reported disruption between London Waterloo and Clapham Junction, which will be expected to continue until 11am.

A picture tweeted by a frustrated commuter. National Rail reported disruption between London Waterloo and Clapham Junction, which will be expected to continue until 11am

A faulty train at Finchley Road has also sparked severe delays on the Metropolitan Line.

On the overground there is no service between Hackney Downs and Chingford due to planned engineering work.

London Overground also warned of severe delays from Liverpool Street to Chingford, Enfield Town and Cheshunt, due to late running of engineering works in the Ilford area.

Thameslink said services remain disrupted in both directions between London and Bedford this morning, due to a fault with the signalling system, which Network Rail technicians are investigating.

Frustrated commuters reacted to the travel disruption on Twitter, with one posting: ‘Only 6.29am and already a disaster on SWRail. 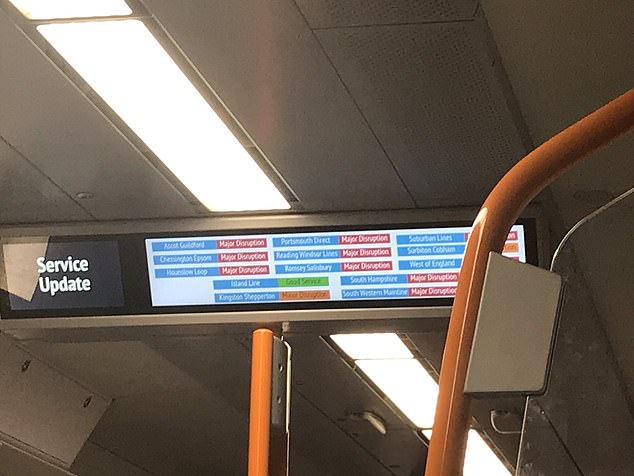 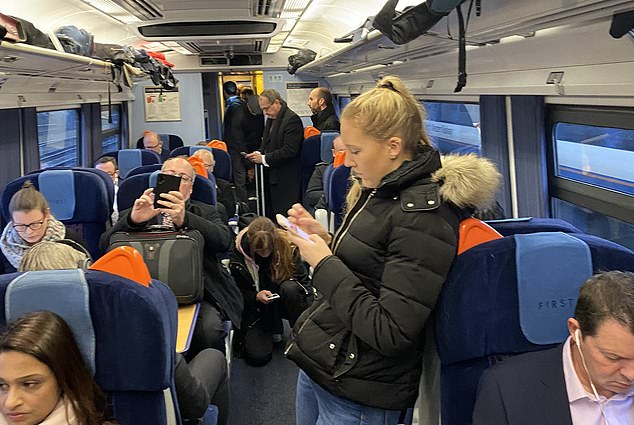 Another Twitter user posted a picture of commuters standing up in a crowded train, captioning: ‘The joy of @SW_Help commuting’

‘Kicked off our train at Raynes Park now stuck on the platform. No information. What is going on?’

Another wrote: ‘Problems happen of course, but the way they are handled is so poor.

‘Rubbish information, and then a massive fight to get compensation, particularly when, as with today, trains are too busy to board…’

A third posted a picture of commuters standing up in a crowded train, captioning: ‘The joy of @SW_Help commuting’.

Rail passengers at a train operator threatened with government action because of its poor service suffered fresh disruption on Thursday due to a series of breakdowns.

The problems followed a survey earlier this week showing SWR passengers recorded the lowest value for money satisfaction in the country.

A number of incidents caused Thursday’s delays including a late finish of Network Rail night engineering work, leading to lines being blocked between Clapham Junction and Richmond during the height of the morning peak.

There was also a signalling problem at Woking which blocked some lines into London, with trains cancelled, delayed or revised, and a power failure between Dorking and Raynes Park.

Services were still being disrupted after a freight train derailed earlier in the week between Southampton and Winchester.

The Department for Transport is preparing contingency plans which could see a new short-term contract with SWR’s owners or transferring the operations back into state control.