A plumber has died after being ‘beaten by a gang of bat-wielding thugs and run over by a van’ following a pub brawl.

Frank Bulbrook was killed near the Gordon Arms in Chislehurst, Bromley, south east London, at around 9pm on Friday.

The 34-year-old was believed to have been running away from the attackers when a blue Transit van allegedly mowed him down in front of his mother and drove off.

Relatives paid tribute to Mr Bulbrook, who had a ‘heart of gold’ and was ‘well mannered and respectful’.

The horrific killing came as a fight broke out at the pub, where two men, 30 and 26, were stabbed at around 8.50pm.

Frank Bulbrook (pictured) was killed near the Gordon Arms in Chislehurst, Bromley, south east London, at around 9pm on Friday 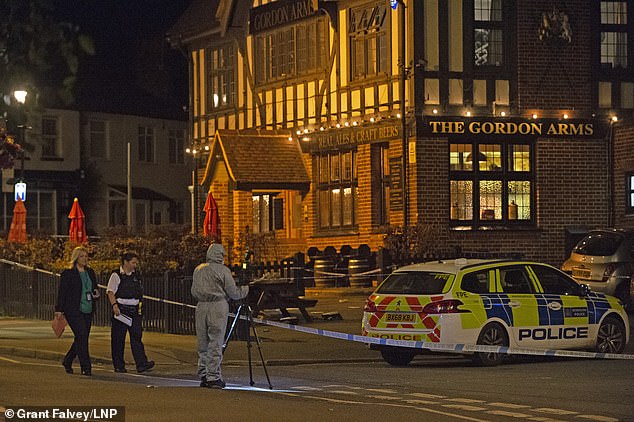 The 34-year-old was believed to have been running away from the attackers when a blue Transit van allegedly mowed him down in front of his mother and drove off (pictured, the pub)

Police were also called to the hit and run involving the van and Mr Bulbrook half a mile away. The van was found abandoned nearby.

Mr Bulbrook’s mother Sarah – who he had been living with after a break up – is understood to have witnessed the collision and was left ‘hysterically screaming’.

A family friend told the Sun: ‘I can see his beautiful blue eyes now. He was so handsome and very popular with the ladies.

‘Frank was such a gentleman and very well mannered and respectful.

‘He’s going to be missed an awful lot. We will see that at his huge funeral which will be attended by hundreds of people, I’m sure. Everybody loved Frank.’

The victim’s brothers were seen in tears outside the family home this morning and were too devastated to talk about his death.

A bouquet of flowers at the scene of the crash had a note which read: ‘Frankie Bulbrook.

‘To me always a laugh, you would help anyone out. Absolute pleasure knowing you. Sleep tight Frank. RIP Brother.’ 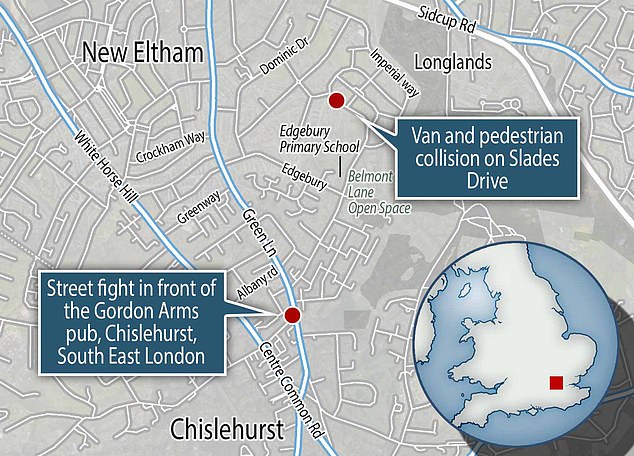 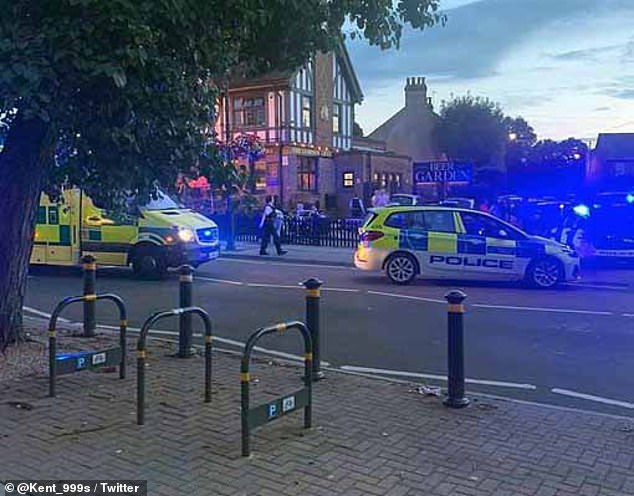 The horrific killing came as a fight broke out at the pub, where two men, 30 and 26, were stabbed at around 8.50pm

A neighbour added the plumber had a ‘heart of gold’, would work hard and always helped others.

Forensic police were working outside the Gordon Arms on Friday night and had a cordon in place.

A woman, who asked to remain anonymous, said: ‘We saw all these men running. There was between six to nine of them and initially I thought they were play fighting.

‘Then as we drove a bit further we saw some of them had these long bats in their hands.

‘We parked up at home and they were running towards us. Suddenly a man in a pink top fell over and the van just went for him on the green.

‘My mum’s mate ran over and gave him CPR as she’s first aid trained but sadly she couldn’t save him.

‘She’s in shock as it was so traumatic. He had an awful injury on his neck – it was open with blood pouring out.

‘The victim’s mum came down with other family and was screaming hysterically when they told her he had died. They were shouting his name Frank.’ 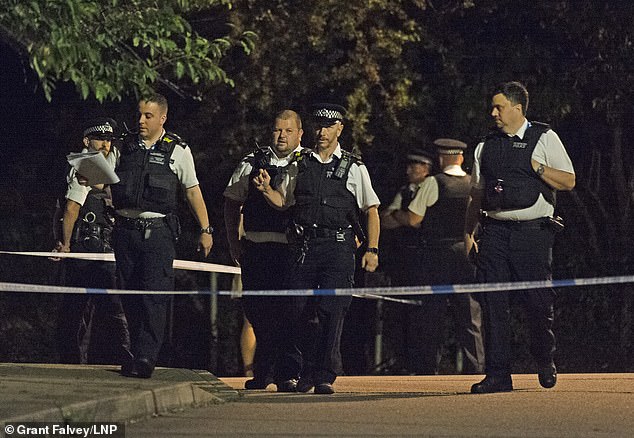 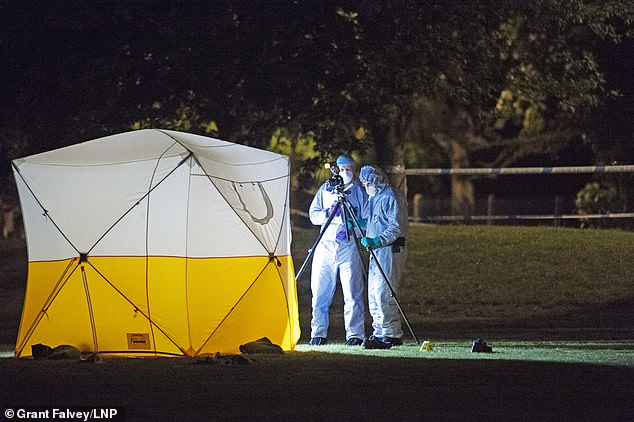 Her friend added: ‘It seemed like a gang fight. We saw it break out and then watched it carry on from the house.

‘I was just trying to make sure my mum and sister were alright if it spilled out. I saw the van go onto the green and then I heard someone go ”oh they’ve hit him”.

‘They parked up by the kerb and all hopped out on the corner. There was this huge brawl which started in the corner of the field.

‘Two people were standing over the man on his back hitting him with bats before another four or five people jumped in on him.’

She added: ‘It looked like a huge scuffle but only one guy appeared to be getting the flak.’

Met Police said the van did not stop following the collision, and was found abandoned nearby.

A spokesman said the two incidents are currently being treated as linked, while extensive cordons and road closures are in place.

Investigators in blue overalls set up a forensics tent on grass near to the scene of the collision and were seen working through the night.

The spokesman said: ‘Police were called at 20:52hrs on Friday, 24 July to Belmont Road in Chislehurst following reports of men fighting.

‘Police and London Ambulance Service attended and found two men with stab injuries. They were taken to hospital and their injuries are not believed to be life-threatening.

‘At 20:54hrs police were alerted to a collision involving a van and a pedestrian near to Slades Drive, Chislehurst.

‘The pedestrian, a man believed to be in his thirties, died at the scene. The van did not stop at the scene and was found abandoned nearby.

‘Enquiries are in their early stages however these incidents are currently being treated as linked.

‘Extensive cordons and road closures are in place as enquiries continue. There have been no arrests.’

‘I believe that there are people who may have witnessed the fight, and one of the victims being struck by a van, who are yet to speak with us. I would urge them to come forward.

‘I would also like to hear from anyone who captured any images on their mobile phones. This could play an important part in our investigation.’

He urged anyone with information about either incident to contact police on 101, quoting CAD 8031 of July 24.