House prices for luxury properties in London have slipped 2.9 per cent in the last year due to Brexit uncertainty and landlord tax changes, according to a new report.

The capital was placed 38th in a list of 43 cities across the globe, as prime property prices fell into negative territory, according to the index from estate agents Knight Frank.

It says concerns over Britain leaving the EU and a tax hit from the rise in stamp duty for landlords and second home buyers, have led to a fall in prices in the top five per cent of homes by value.

Knight Frank’s experts said that property prices in prime central London are trading 10 to 20 per cent below their peak in 2014.

Prime London: The Knight Frank index looked at high-end property prices from 43 cities around the world, including the capital

The decline appears to be accelerating, as London property prices dropped by 2.3 per cent in just six months between March and September – after years of growth on the index – indicating that they could fall further next time round.

The drop in prices has been exacerbated by more landlords attempting to sell their properties following tax changes, leading to extra supply at the same time as people are reluctant to spend millions of pounds on London property.

The 2016 changes to stamp duty added a three per cent surcharge on all rates for buy-to-let properties.

This affects anyone buying a property that is not their main residence and on the average property in Kensington & Chelsea, which costs £1.4million according to the ONS, the stamp duty tax bill would be £125,750.

Singapore is the city that has seen the most growth in the housing market with a rise of a whopping 13.1 per cent over the last 12 months.

However, this slowed to 1.7 per cent in the last three months, indicating a slight cooling.

The city was closely followed by Scotland’s capital, Edinburgh, which had risen by 10.6 per cent in the last 12 months – a stark contrast to London.

Madrid rounded off the top three with a hefty rise of 10.1 per cent in the last 12 months.

Table showing the change in housing prices over the last 12 months, 6 months and 3 months

Tax changes on mortgage interest tax relief, that were made in 2017, have also led to property investors fleeing the UK market.

Landlords can no longer claim all of their mortgage interest against income tax on rent, under new rules that are to be phased in over the next couple of years.

This will be removed altogether by 2020 and replaced with a 20 per cent tax credit on mortgage interest paid. 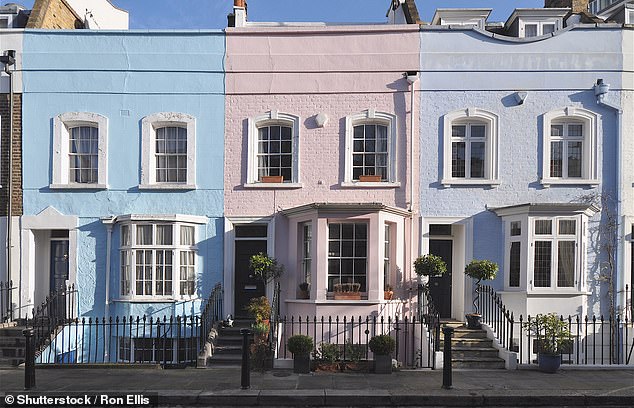 Last week we revealed that the number of available rental properties is down in London by around a fifth annually, with agents finding tenants four days quicker for landlords’ properties than a year ago. 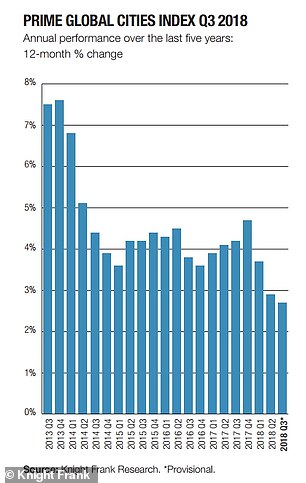 Drop in prices: Graph highlighting the change in annual performance over the last 12 months

Liam Bailey, global head of research at Knight Frank said: ‘Uncertainty around Brexit has certainly caused some prospective buyers in London to delay their plans.

‘However, it is higher stamp duty rates, which have led to a slowdown in sales volumes and also falling prices in the UK capital.

‘Price falls in central London mean housing is trading at 10 per cent to 20 per cent lower than in 2014.

‘That said the volume of prospective purchasers registering to buy is very high currently, suggesting that when clarity on the Brexit deal is provided activity should rise relatively quickly.’

Prices of luxury properties have increased by an average of 2.7 per cent across the 43 cities that the estate agents looked at.

This represents the index’s weakest performance in annual terms for almost six years.

Earlier in the month, latest Office for National Statistics figures showed that property prices in the capital had fallen in the past year, citing Brexit, heavier taxes and stretched affordability.

Across the UK, the cost of the average home grew by 3.4 per cent, but in the capital they fell by 0.2 per cent in the year ending in August.

The areas of London to have seen the biggest price falls are some of the most expensive in the capital, such as the central borough of Westminster, where the average price has fallen by 7.6 per cent in August to £957,062, from more than £1million in August last year.

In some cases, we found instances of expensive London homes having reductions of more than 45 per cent in order to sell.