London Mayor Sadiq Khan has been spotted out cycling in the capital today, closely followed by his security team in a £300,000 armoured car – as commuters were last week told to ditch public transport.

Mr Khan, wearing a blue face mask and grey helmet, is pictured taking advantage of the balmy weather to cycle in the capital, with the jet-black Range Rover following closely behind him.

The under-fire Mr Khan has been slammed for reducing underground services during the coronavirus pandemic and hiking the congestion charge from £11.50 to £15, putting more yet more pressure on the Tube.

Last week he unveiled his transport plan for London, which included urging people to wear masks and encouraging people not to use the tubes of buses unless they had to.

But he faced criticism on Friday after he was seen being driven to work in the Range Rover, as Tube passengers once again struggled to follow social distancing guidelines on packed carriages.

London Mayor Sadiq Khan seen out cycling with his security team and his £300,000 armoured Range Rover following from behind

His bullet-proof vehicle, decked out with under-floor blast protection, armoured glass, spike-proof tyres, a five-litre engine and an emergency escape system, is provided by Scotland Yard for his safety, a spokesperson said.

Sadiq Khan’s £300,000 Range Rover is kitted out with extensive protective gear, including:

Mr Khan requires a top level police security detail because of threats to him,’ the spokesman added on Friday.

‘The Metropolitan Police provide round the clock protection for the Mayor of London. This is not a case of the Mayor having a chauffeur-driven car, either provided by City Hall or anybody else. The vehicle is there for his safety.’

The Prime Minister, in partially easing restrictions during the pandemic, had urged people to stay away from public transport, and either walk, cycle or use their cars.

But the transport network faces further chaos on Monday morning when the new congestion charge comes in forcing more people onto the tube and its reduced services.

The Mayor of London announced that from next month the daily charge, introduced by Ken Livingstone in 2003, will for the first time be imposed on weekends and extended out of rush hour from 6pm to 10pm – just hours after accepting a £1.6billion taxpayer-funded bailout. 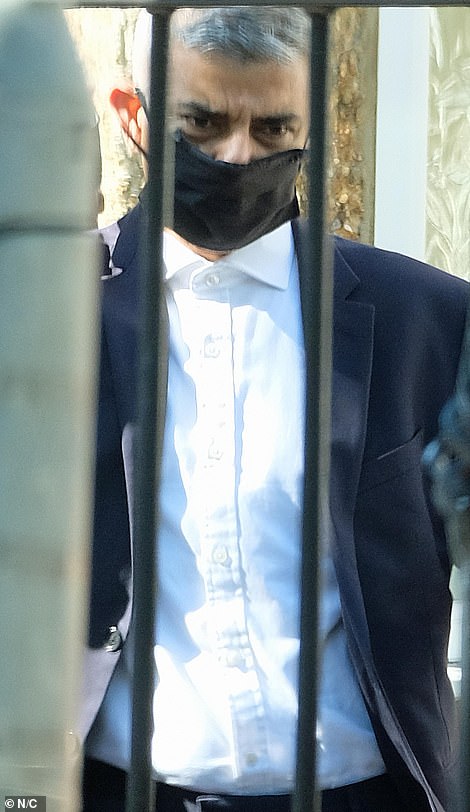 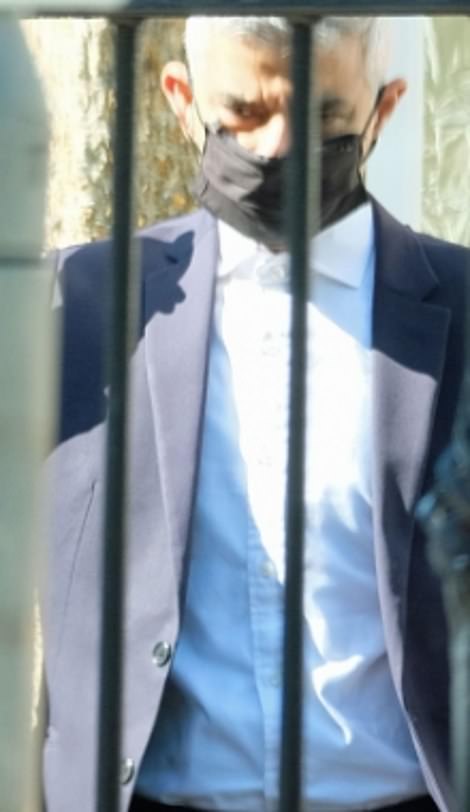 Sadiq Khan, wearing a black mask, leaves his South London home as he prepares to head to work, on Friday 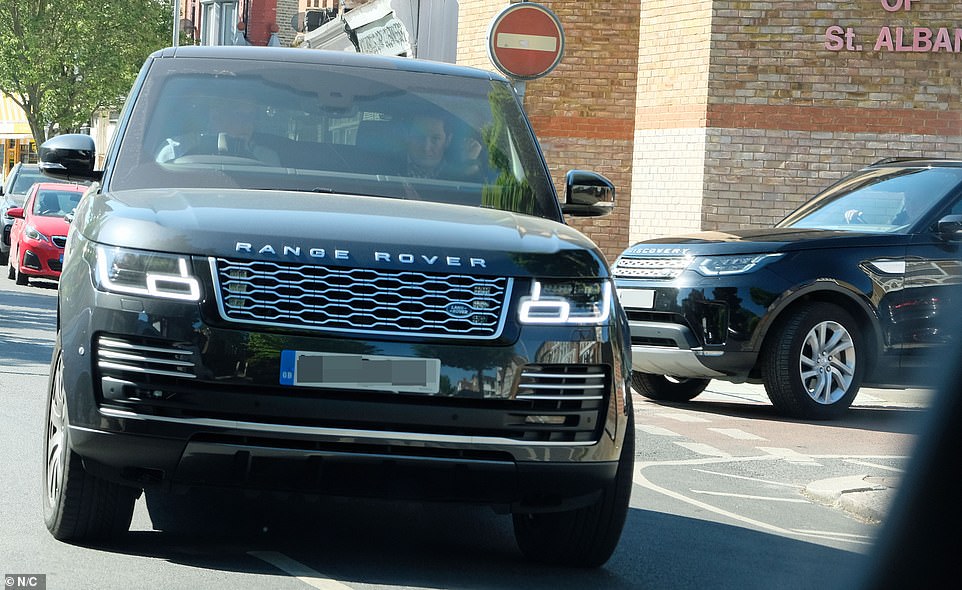 Motorists in London will again have to pay the £11.50 congestion charge again from Monday, a fortnight earlier than expected, after it was suspended at the start of the lockdown to make it easier for key workers to get around.

From June 22, when the lockdown is expected to have been eased further by Boris Johnson, the daily congestion charge will rise from £11.50 to £15 – a 30 per cent hike. It will also be enforced seven days a week, and until 10pm, for the first time. NHS workers will be able to claim it back, City Hall said.

Mr Khan on Friday suggested the congestion charge announcement was imposed on him by the government because it was the ‘only deal on the table’ offered by the Department of Transport.

But a spokesman for Number 10 said that the government only asked for the reimposition of the congestion charge and ‘the details of how to do it are for TfL and the Mayor.’

The Mayor of London, who accepted a £1.1billion grant and £505million loan, said: ‘I want to be completely honest and upfront with Londoners – this is not the deal I wanted. But it was the only deal the Government put on the table and I had no choice but to accept it to keep the Tubes and buses running’.

There is anger and disbelief among Londoners who have been forced to drive to work to protect their family from coronavirus because of a lack of social distancing on public transport.

Mr Khan has also been shamed by pictures from European capitals such as Berlin, where 100% of Tube services have been running for weeks with staff on hand to give out free face masks to all passengers. 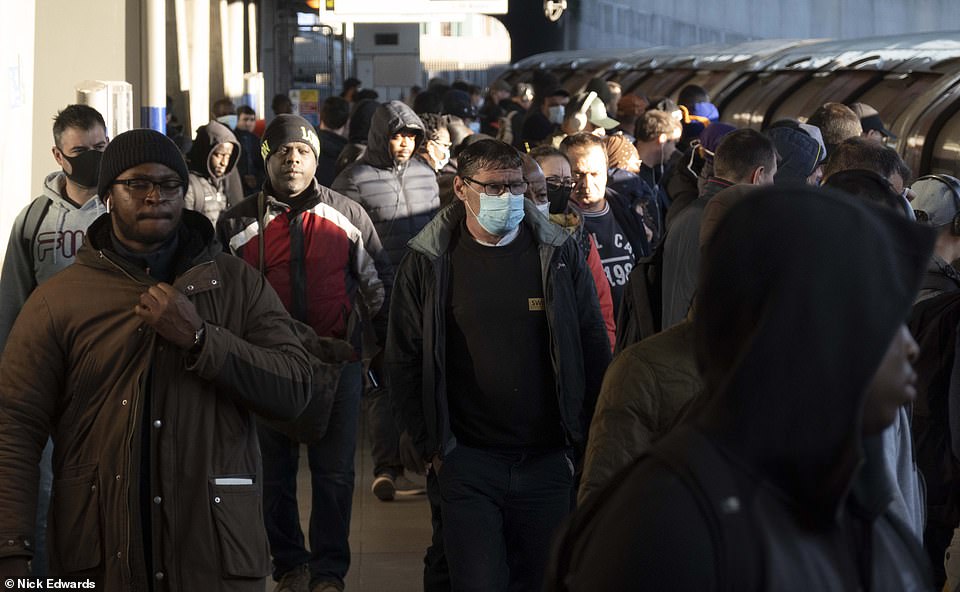 Despite Sadiq Khan urging people to stay at home and avoid the Tube, millions are returning to their workplaces (pictured in Canning Town on Friday), the Mayor of London today hiked the price of the congestion charge to £15 and extended it to weekends 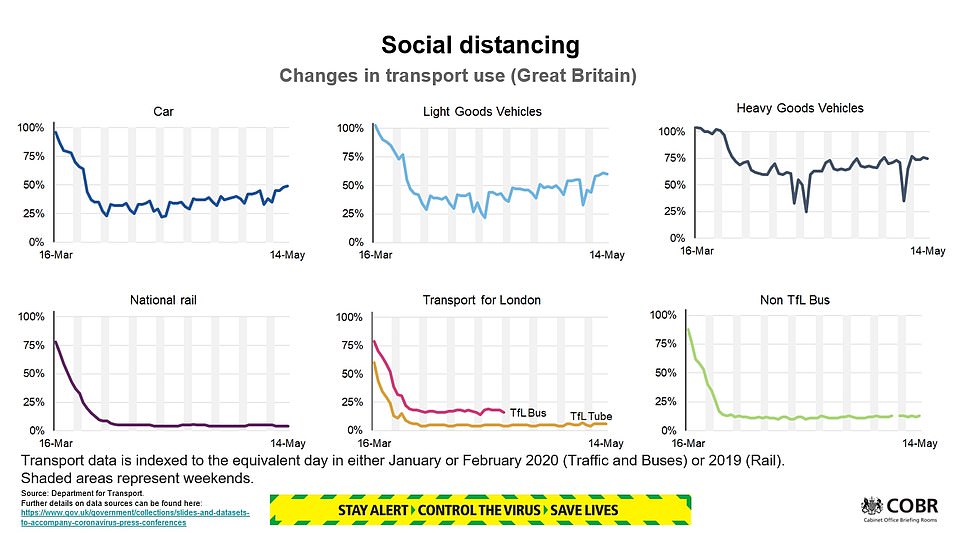 Mr Khan, the son of a London bus driver, is believed to have been forced to travel by car because he is one of Britain’s most high profile Muslims which has led to threats against him.

‘Evading extreme threats at high speeds is not a challenge thanks to a specially manufactured wheel(tyre) that incorporates a run-flat system.

‘In emergencies, occupants can exit Range Rover Sentinel rapidly and securely through the armoured escape panel. Located in the rear luggage compartment, it allows for escapes even if the doors are unusable.’

A spokesman for Land Rover said last week: ‘As this is a highly bespoke model, pricing is on application to customers.’

A spokesman for the Mayor of London said on Friday: ‘The Mayor does not have a chauffeur-driven car, either provided by City Hall or anybody else.

‘The Metropolitan Police provide round the clock protection for the Mayor of London due to the heightened threat level to his safety.’

It comes after yesterday Mr Khan urged his one million followers on Twitter that they should ‘play their part’ by staying at home as much as possible.

This is the first weekend since Prime Minister Boris Johnson announced the easing of lockdown restrictions, leaving the British public able to travel further during the coronavirus crisis.

Mr Khan’s message comes hours after the Mayor of London announced plans to make the capital Europe’s biggest car-free zone, with a map detailing how four of London’s busiest streets will be made for just pedestrians, cyclists and buses. 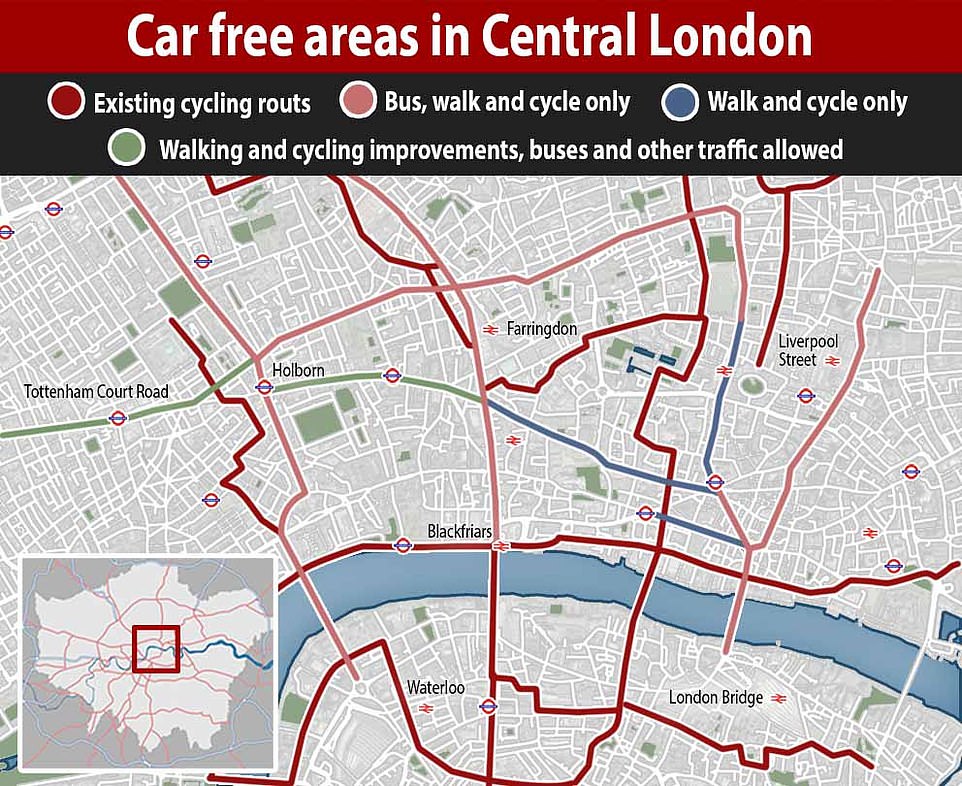 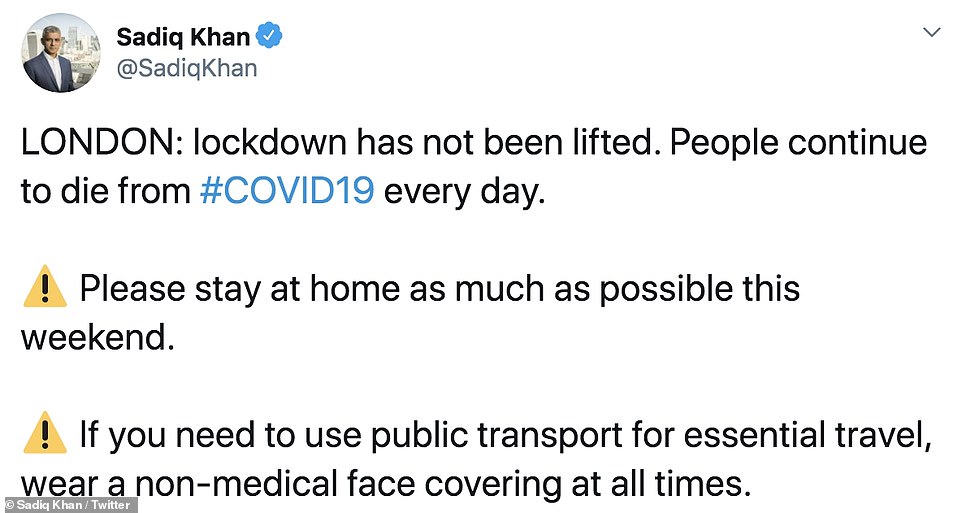 ‘LONDON: lockdown has not been lifted. People continue to die from #COVID19 every day,’ he said.

‘Please stay at home as much as possible this weekend. If you need to use public transport for essential travel, wear a non-medical face covering at all times.’

The car-free zones will see streets between London Bridge and Shoreditch, Euston and Waterloo and Old Street and Holborn limited to buses, pedestrians and cyclists. 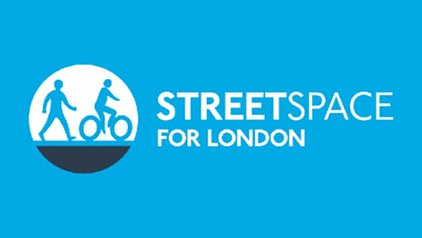 London mayor Sadiq Khan says he will create one of the world’s largest car-free areas of any capital city by closing swathes of central London to motorists.

Mr Khan and Transport for London today announced the London Streetspace programme, which will transform the capital’s streets to have a focus on walking and cycling as people returning to work from the coronavirus lockdown try and avoid public transport.

The Mayor of London said: ‘Many Londoners have rediscovered the joys of walking and cycling during lockdown and, by quickly and cheaply widening pavements, creating temporary cycle lanes and closing roads to through traffic we will enable millions more people to change the way they get around our city.’

Exact details have not been announced, nor a time frame.

A Transport for London spokeswoman said on Friday afternoon: ‘We’re working closely with London’s boroughs to determine the final details of the new car-free zones and will confirm exact street locations and timescales once these have been agreed.’

Among the scheme’s plans is the ‘rapid construction of a strategic cycling network, using temporary materials,’ which will include routes to reduce crowding on Tube and train lines.

Some streets will be switched to walking and cycling only, while others may also have buses. This has been planned for streets between London Bridge and Shoreditch, Euston and Waterloo, as well as Old Street and Holborn.

Similar restrictions on smaller roads are being worked on between officials and London boroughs, while lorries and cars may be prohibited from London Bridge and Waterloo bridge.

With people returning to work and the need to avoid congestion on public transport, experts have warned it is crucial that walking and cycling is encouraged in order to maintain social distancing during the coronavirus crisis.

And a detailed map of the streets selected for the new measure have been revealed, showing where Londoners are able to cycle and walk as lockdown restrictions are eased in what will be Europe’s biggest car-free zone.

In an official statement made on Friday, Mr Khan said that Covid-19 presented ‘the biggest challenge to London’s public transport network in Transport for London’s history.

‘It will take a monumental effort from all Londoners to maintain safe social distancing on public transport as lockdown restrictions are gradually eased,’ he added.

‘That means we have to keep the number of people using public transport as low as possible. And we can’t see journeys formerly taken on public transport replaced with car usage because our roads would immediately become unusably blocked and toxic air pollution would soar.

‘I ask that Londoners do not use public transport unless it is absolutely unavoidable – it must be a last resort. If you can work from home you should continue to do so. We should all spend more of our leisure time in our local areas too.’

Mr Khan said that the growing number of people walking and cycling as a result of the lockdown has justified the move to widen pavements to allow more of the public to walk and cycle in the city.

‘Many Londoners have rediscovered the joys of walking and cycling during lockdown and, by quickly and cheaply widening pavements, creating temporary cycle lanes and closing roads to through traffic we will enable millions more people to change the way they get around our city,’ he said.

The statement reads that work on the proposed road closures will begin with immediate effect, while officials say the work should be completed within a six-week time frame.

‘We will need many more Londoners to walk and cycle to make this work,’ the Mayor of London continued. ‘That’s why these plans will transform parts of central London to create one of the largest car-free areas in any capital city in the world.

‘If we want to make transport in London safe, and keep London globally competitive, then we have no choice but to rapidly repurpose London’s streets for people.

‘By ensuring our city’s recovery is green, we will also tackle our toxic air which is vital to make sure we don’t replace one public health crisis with another. I urge all boroughs to work with us to make this possible.’

The Mayor of London’s latest announcement puts the UK capital among a number of cities that have set out measures to make a green and sustainable recovery from the coronavirus crisis through walking and cycling.

Paris have pledged €300m for new cycle lanes, which will run parallel to the city’s Metro network, offering commuters a viable alternative. Meanwhile, Milan have set out plans for one of the continent’s most ambitious walking and cycling schemes.

Elsewhere in Britain, the city of Manchester are set to pedestrianise areas of Deansgate in the city centre, while the Scottish government have pledged £10m towards pop-up cycling and walking routes.