A gang of 10 moped raiders behind a £1 million crime spree across London laughed in the dock today as lawyers took almost an hour to outline the 99 previous convictions they have amassed for 172 offences.

Prosecutors say the judge should pass severe deterrent sentences on the thugs after an ‘exponential rise’ of moped robbery on the streets of London.

The bandits stole phones, tablet computers and caused damage worth more than £1 million using hammers, knives, a gun and even a fencing post as a battering ram.

They hit different Three Mobile outlets several times in the early hours to grab the latest handsets and were in and out in ‘a matter of minutes.’ 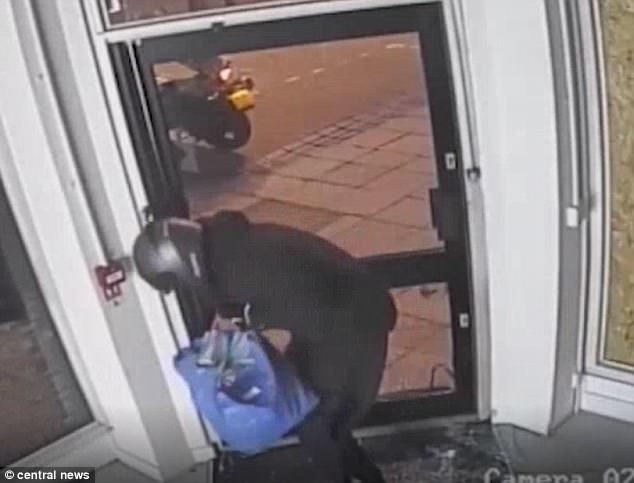 The gang was caught on CCTV during one terrifying raid. They used what appeared to be a battering ram to smash the bottom of the window through before climbing inside 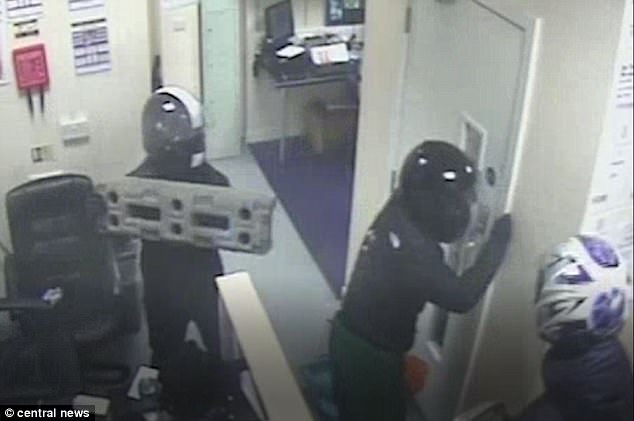 They were then recorded breaking their way into a secure room using what appears to be a concrete slab. They were looking for Apple and Samsung devices

The gang sat in the dock chatting, looking bored and giggling loudly as prosecutor Michael Shaw spent nearly an hour reading out their prior convictions.

Ringleader Courtney White, 22, his righthand man Mominur Rahman, 22, along with Mohammed Hussain, 24, and Chang Mabiala, 22, were convicted of conspiracy to commit aggravated burglary after a four-week trial at Blackfriars Crown Court in November.

Bobby Kennedy, 22, and Chris Costi, 19, were found guilty after a trial in August of conspiracy to commit aggravated burglary stores across London.

Three other members of the gang Alfie Kennedy, 20, brother of Bobby, Dylan Castano-Lopez, 19, and Adam Atallah, 21, all previously pleaded guilty to their part in the conspiracy.

The thug attacked three elderly people from behind ripping off their watches and necklaces.

One was a 76 year-old women who he dragged to the floor and tried to pull off her necklace, leaving her with cuts and bruising on the neck.

He received a year in a young offenders institute in 2013 for that offence.

The robber punched another male pensioner in the back off the head, running off with his watch. 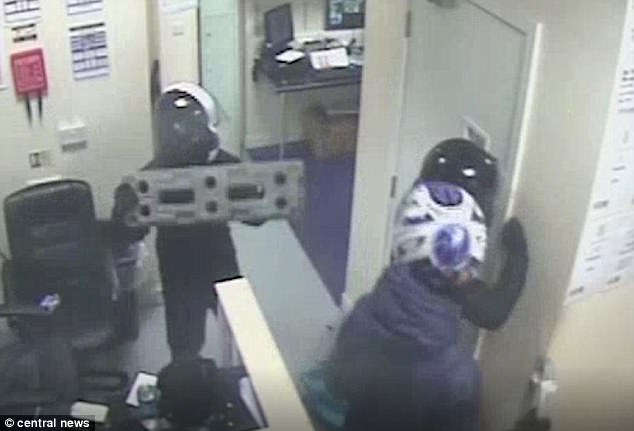 The gang then used a stepladder to try and force their way inside. Eventually the door gives way and the thieves ransack the room 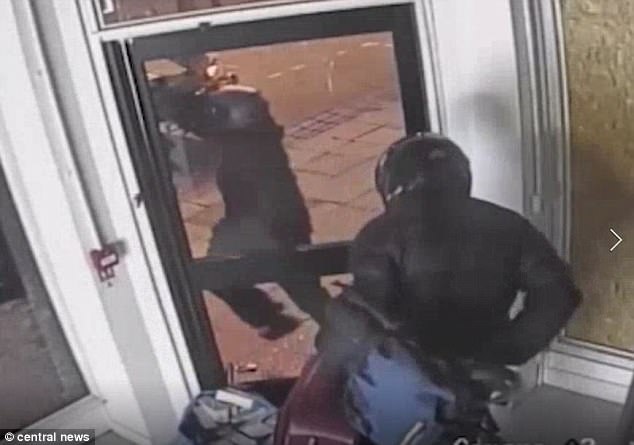 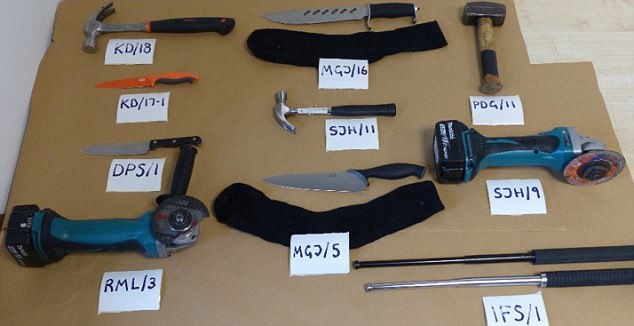 The bandits stole phones, tablet computers and caused damage worth more than £1 million using hammers, knives, a gun and even a fencing post as a battering ram 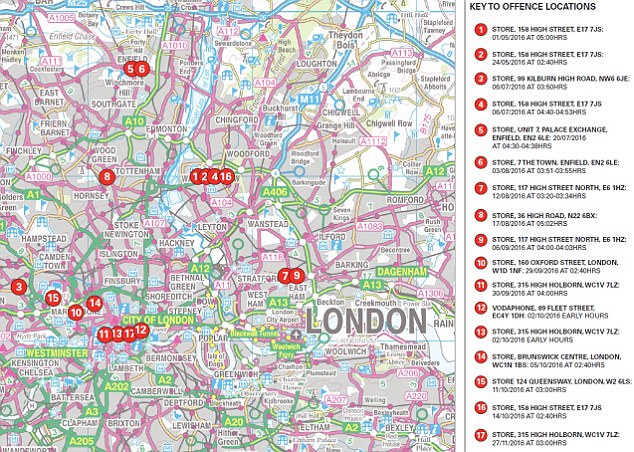 The gang hit targets across London. Prosecutors called for severe deterrent sentences on the thugs after an ‘exponential rise’ of moped robberies across the capital

White was also handed a suspended jail sentence in November 2015 for handling jewellery stolen during the vicious mugging of a 61-year-old woman in north London.

He was also convicted at Wood Green Crown Court for firearm possession after Police found a loaded 9mm handgun with his DNA in the back of a Peugeot 206 on December 2 last year, three days after the gang’s final raid.

A South African Vektor SP1 9mm parabellum calibre self loading pistol was found in the passenger side footwell along with 40 bullets in Craven Park Road, Harlesden. 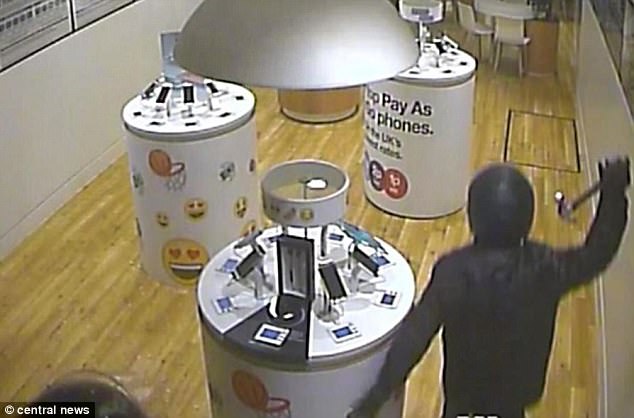 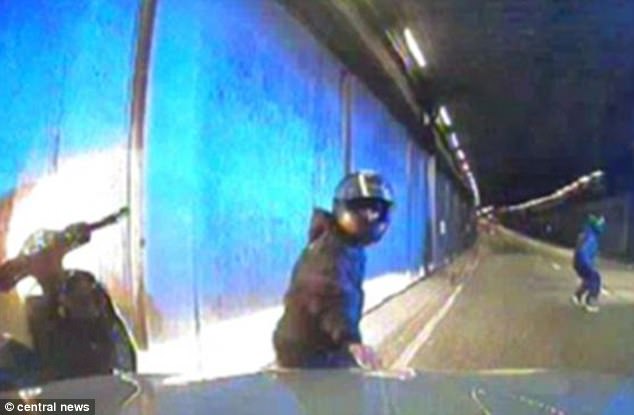 The gang used mopeds to carry out their audacious robberies

His accomplice, Mominur Rahman was locked up for 12 months in 2015 after targeting elderly people in a £265,000 fraud by posing as police.

He rang his victims and told them their bank account had been defrauded, then attended their address pretending to be a courier to pick up their bank card.

Mr Shaw said that a deterrent sentences must be passed to discourage others.

‘This type of offending is having a massive community impact,’ he said.

‘The crime figures demonstrate an exponential rise. There are few factors that decrease the seriousness.

‘The only person without previous convictions is Mr Costi.

‘There is, as far as I can see, no sign of remorse.

‘If ever a case in which a deterrent sentence needs to be passed, in order to prevent an exponential in these types of offending, this is it.’