A moped-riding thug who made off with more than £20,000 worth of designer clothes after threatening staff with a huge hunting knife has been jailed.

Shahruk Sheraji, 22, mounted the kerb outside a designer clothing store in Islington, London, along with three other mopeds – all with pillion passengers.

Three riders stayed with the mopeds outside the shop while one rider and four passengers ran into the store.

Blackfriers’ Crown Court heard Sheraji, of Camden, headed for the counter while brandishing a 12in hunting knife and dropping the sheath in the doorway.

The thug began to threaten the terrified manager behind the till as four other suspects grabbed as much designer gear as possible.

The gang made off with more than £20,000 worth of designer items, including Armani, Canada Goose, Hugo Boss and Moncler jackets.

The robbers made their getaway on the mopeds which had their registration plates removed.

Police were alerted and officers obtained CCTV footage that showed Sheraji dropping the black knife sheath in the doorway. 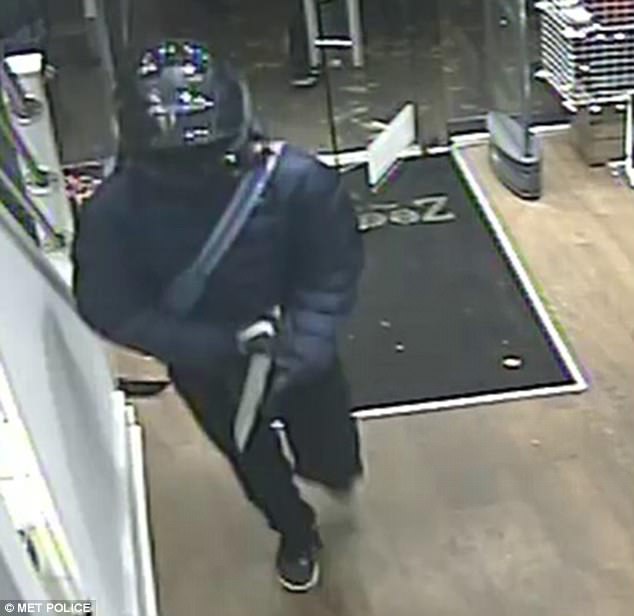 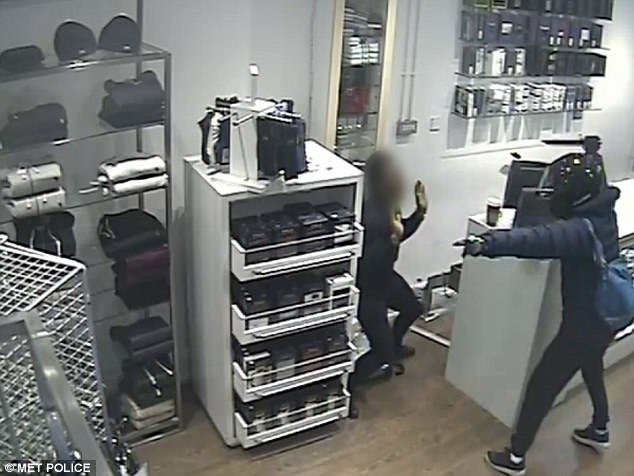 He waves the terrifying weapon at the store’s manager while other members of the gang loot the store of more than £20,000 worth of designer clothing

Forensics experts also discovered the 22-year-old’s DNA on the sheath — placing Sheraji at the scene.

Then, on November 26 the same year, Sheraji was arrested by police who identified him following a spate of calls from victims who had mobile phones stolen by two moped-riding thieves across central London.

Officers were able to apprehend Sheraji as who tried to flee on foot.

He was found to be in possession of more than a dozen phones, as well ass items of clothing which matched those seen on CCTV footage from the robber at the designer clothes store. 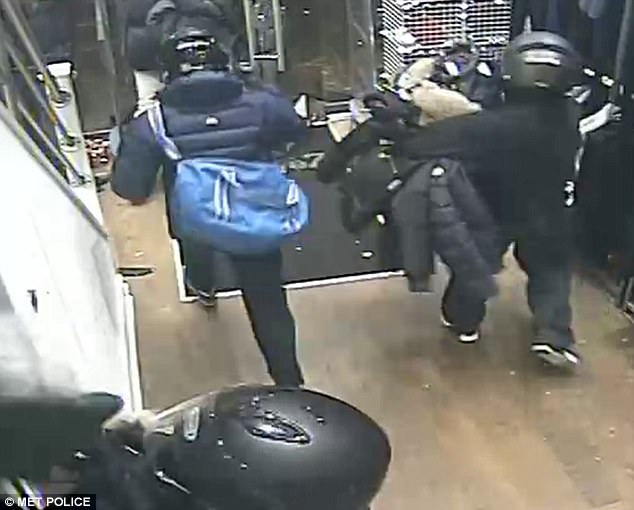 Grabbing everything in sight, the other men make off with thousands of pounds of expensive clothes, including Armani, Canada Goose, Hugo Boss and Moncler jackets

‘This planned attack at the shop left those who witnessed it feeling terrorised. The public should feel reassured that we are working to make the streets of London safer.’

Detective Chief Inspector Christine Jessah, from the Central North Command Unit, added: ‘As a result of the painstaking detective work by officers in Central North CID, a dangerous offender is off the streets and this lengthy sentence should be a deterrent to others.’

There are still a further seven suspects who were involved in this incident who need identifying.

You can also get in touch anonymously via Crimestoppers on 0800 555 111 or online at crimestoppers-uk.org