Breathtaking footage shows police knocking moped muggers off their bikes in new tactics to stamp out the scooter crime-wave that has plagued London.

Dashcam video released today shows a squad of specially trained drivers carrying out so called ‘tactical contacts’, which involve tipping crooks off their scooters or dumping them on the bonnets of police cars.

One incredulous rider raises his hands in indignation after he is sent clattering to the ground, and another told police: ‘I took my helmet off so I thought you’d stop chasing me.’

The Met says it only uses the tactic as a last resort to stop muggers who are a risk to pedestrians or putting police in danger.

Police say they are now carrying out ‘tactical contacts’ every day and have used the method 63 times so far.

Sergeant Tony McGovern, who is one of the specially-trained drivers using the tactic, said: ‘They think that if they remove their helmets we’ll stop the pursuit, sometimes we may but, as you can see, we have used tactical contact against riders without helmets.’

He said police drivers have to quickly weigh up the risk to the public and the rider before carrying out the manoeuvres, as fleeing criminals often ride along busy pavements or behind railings to evade capture.

The method has been rolled out around the country after a seemingly-unstoppable crime wave gripped the capital this year, with scooter yobs grabbing people’s phones, watches and bags, smashing their way into jewellery shops and stabbing anyone who got in their way.

Police say some moped robbers have hit 30 victims in one hour alone, with those coming out of tube stations seen as an easy target.

Police officers have also been injured by thieves riding directly into them.

Police were previously frustrated in catching the criminals, who often discarded their helmets to make officers think twice before chasing them. 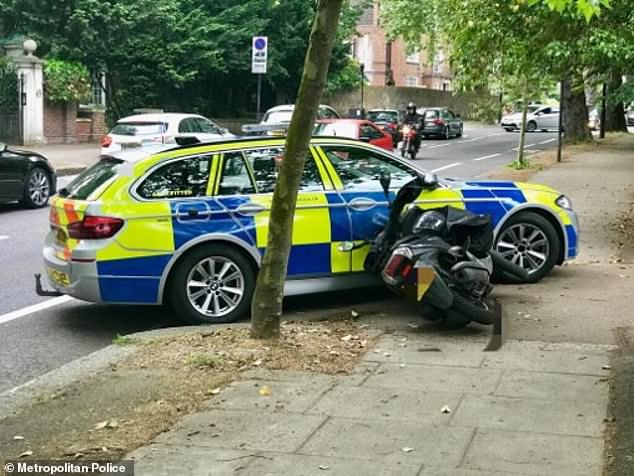 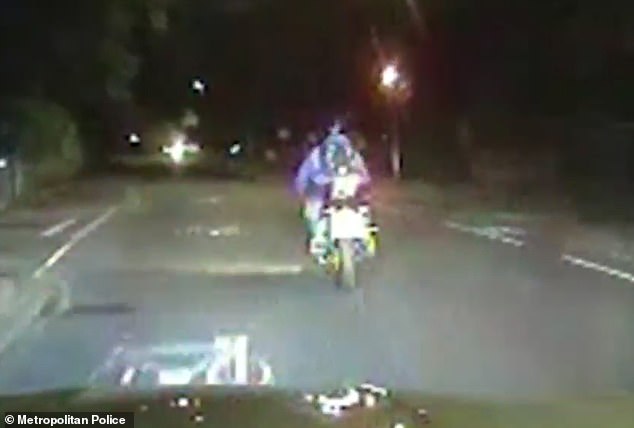 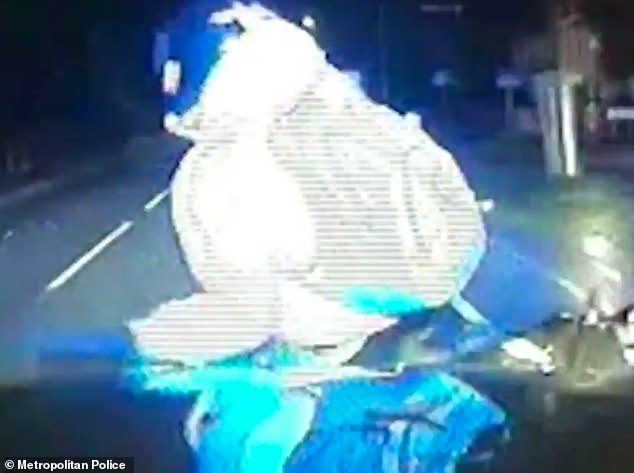 Victims of the spate of incidents included ex chancellor of the Exchequer George Osborne and comedian Michael McIntyre, who was robbed of his Rolex by two men on a moped while parked outside his children’s school.

But Scotland Yard chiefs have now vowed to get tough with the gangs as they attempt to take back control of the streets.

Met Commander Amanda Pearson said: ‘There is a perception that if you remove your helmet or fail to stop for police when requested to do so we will not take any further course of action. This is untrue.

‘The public quite rightly expects us to intervene to keep London safe.  Our highly trained police drivers weigh up the risks and decide upon the most appropriate tactics in those circumstances.

‘Offenders on mopeds and motorcycles who attempt to evade the police are making a choice that puts themselves and others at risk.

‘So our message is clear: we can, we will and we do target those involved in moped and motorcycle crime at every opportunity.’

Commander Pearson added: ‘We are not complacent and we will continue to work tirelessly across London to maintain this downward trend.’

Commanders say no stop carried out by the operation targeting moped criminals has needed to be referred to the police watchdog, although three incidents involving mopeds are being looked at by the IOPC.

As part of the new blitz on moped thieves, police are spraying riders with so-called ‘DNA spray’, which links them to their crimes when they are eventually caught.

Mohammad Khaleghi was sprayed with the substance as he rode his moped dangerously in Camden in May in this year. 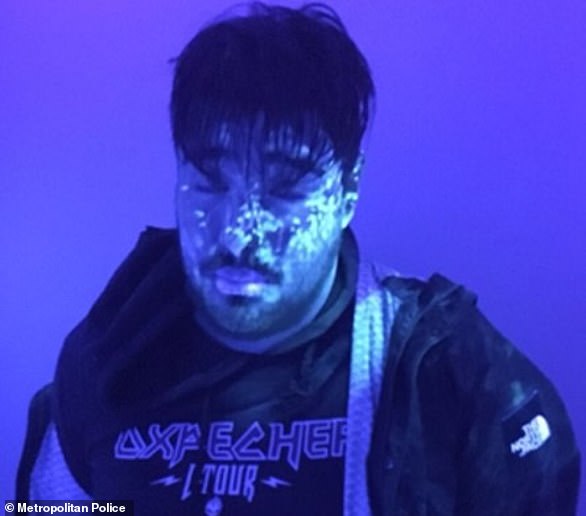 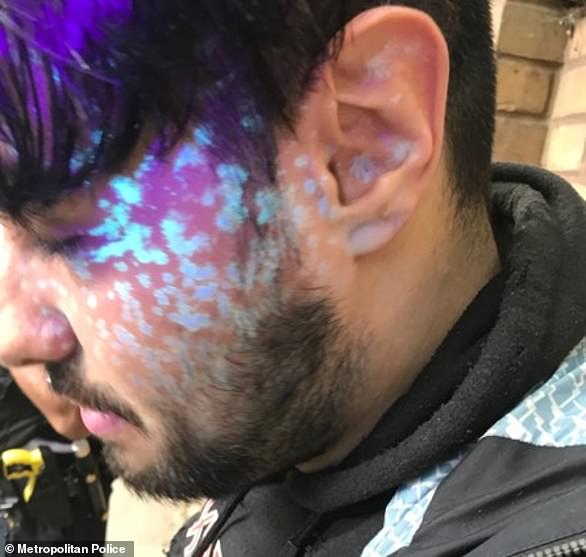 The spray is visible under UV light, even in daylight, and helps link criminals to crimes

Over 6,000 new forensic tagging sprays have been handed to local officers on London’s streets.

Chief Inspector Jim Corbett said: ‘6,900 officers have been trained so far. We are going to train everyone. 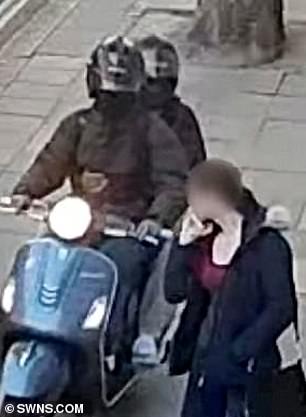 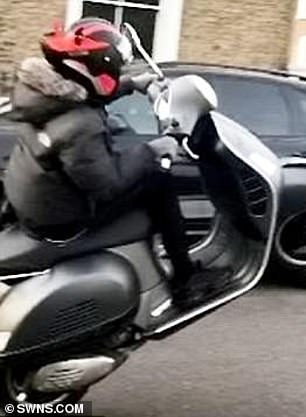 A gang robbed 103 phones in an 18 day reign of terror across the capital – including targeting ex-Chancellor George Osborne. Pictured: The gang in action

Shocking figures showed at one time there were more than 60 moped thefts a day on London’s streets.

Moped or motorbike-enabled crimes were up 50 per cent on the last 12 months, figures published in June revealed.

Separate statistics revealed 86 per cent of robberies and 78 per cent of burglaries in the UK went unsolved last year.

Among the most shocking of the incidents that hit the capital in recent years were those involving Nathan Gilmaney and Troy Thomas, who tried to rob as many people as possible in a quickfire series of robberies.

They killed 28-year-old Abdul Samad for his iPhone and little more than ‘aggression and blood lust’ as they swept across west London on a scooter.

A chilling video shows Gilmaney and Thomas the criminals calmly return to their victim to demand his PIN number before knifing him.

The pair, from Maida Vale, west London, were jailed for more than 20 years each in June.

Following their arrest, police noticed a 40 per cent drop in that type of offending.

Politician turned Evening Standard editor was also hit by moped robbers, who made a grab at his mobile as he left BBC headquarters in Portland Place.

He said: ‘I was physically unharmed but felt shocked and stunned. The incident happened so quickly that I barely registered what had happened until afterwards. The scooter was so close that it almost brushed past me. Had it hit me, I have no doubt I would have been seriously injured.’ 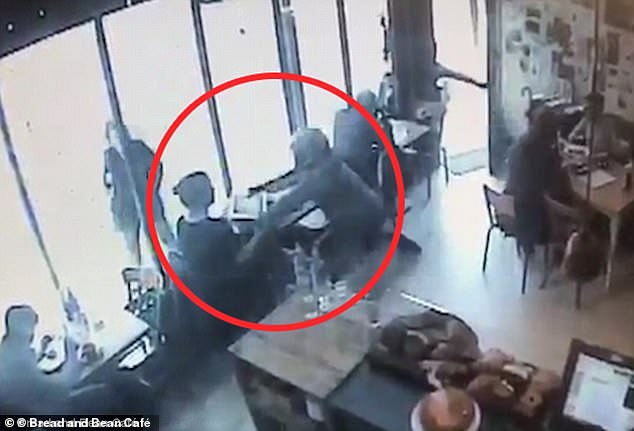 Footage showed the victim working on a device at the Broad and Bean Cafe in Archway, north London as a helmet wearing thief walks in

Another video last year laid bare how brazen the robbers had become after one was filmed walking into a busy cafe and pulling a laptop from a woman’s hands.

Footage showed the victim working on her device at the Broad and Bean Cafe in Archway, north London as the helmet wearing thief walks in.

He quickly grabs the computer before running back out of the door and jumping on a waiting moped, which then speeds off. The raid took less than 10 seconds.

Café owner Valbona Sadiku said it was the second time moped robbers have targeted the premises in just three weeks.

Nathan Gilmaney, 19, and Troy Thomas, 18, attacked nine members of the public during their two-hour moped spree on October 16 last year.

They began their rampage at around 10.30pm in Maida Vale, where they tried to rob Nazmul Chowdhury.

An hour later the duo attacked Venezuelan Ehimer Fierro-Berbesi and his aunt Ana as they sat outside their Maida Vale home having a cigarette. 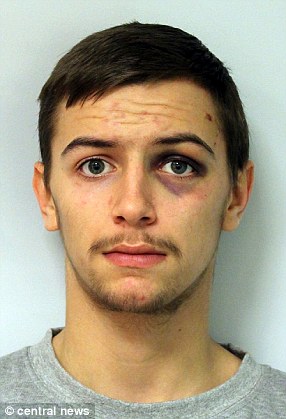 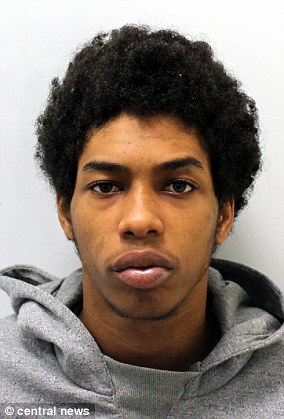 Moped robbers Nathan Gilmaney, 19, and Troy Thomas, 18, were jailed for a crime spree which terrified a series of victim and left a charity worker dead

Minutes later they happened across Joseph Denby as he walked in Ladbroke Grove, but he fortunately escaped with his wallet and ‘old Nokia’.

Juan Perez Buendia was confronted shortly after having stepped off a bus on Ladbroke Grove.

He threw his bag at the robbers’ feet and ran off, also discarding his phone as the pair gave chase on the scooter.

By this stage, the two defendants were carrying the proceeds of five armed robberies and decided to try to sell some of what they had just stolen.

Shortly after 1am, they visited a block of flats off the Harrow Road in Ladbroke Grove and sold some of the items including Mr Samad’s iPhone and foreign currency which had been in Mr Perez Buendia’s bag. 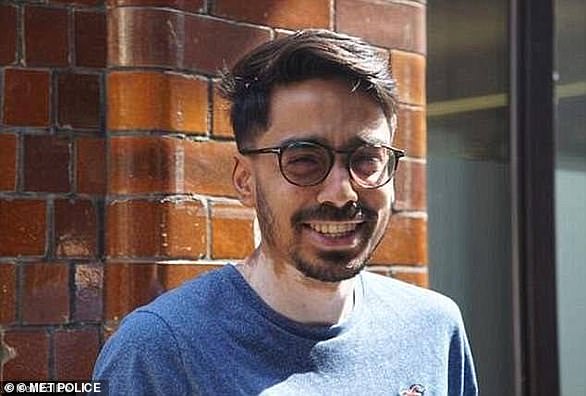 Abdul Samad, 28, handed over his iPhone and other valuables when he was confronted by moped muggers in Paddington, west London – but they killed him anyway 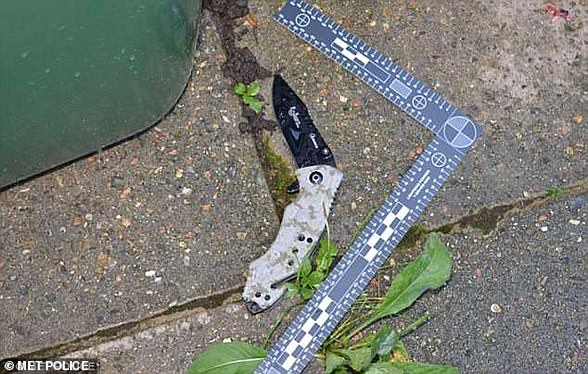 Just after leaving at about 1.05am, Graipich Vudto was stabbed in the stomach in Ladbroke Grove by Gilmaney after refusing to hand over his phone.

Silverio Pina was stabbed in the arm by Gilmaney at 1.10 before both again fled.

At around 1.15am the pair snatched Natevan Casinova’s mobile straight out of his hand as they roared past him at the junction of Portobello Road and Pembridge Road.

They later punched a young girl after she ran away from them.

They then stabbed Nelson Aparicio in the stomach at about 2am after demanding his phone. 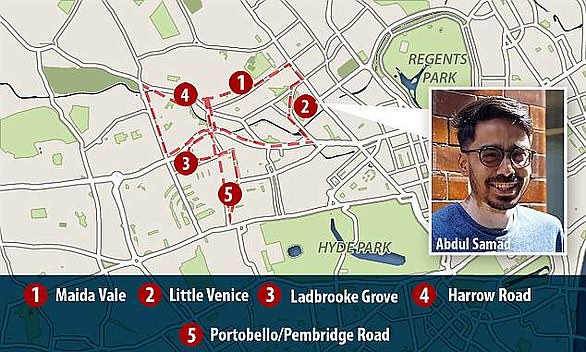