Punters across the country have been gasping to nurse a pint at their favourite bar ever since the coronavirus lockdown was imposed.

And one man has come up with a temporary solution – recreating his perfect pub in virtual reality on the computer.

His design replicates in detail the establishment’s red walls, green suede bar stools and etched glass mirrors – as well as his friends who he likes to drink with.

He even whipped up a VR Robbie Williams, who he had follow him around the pub shouting ‘here he is!’.

In an article for Wired, Mr Cross said: ‘After weeks of effort and days of rendering, I’ve done it. I’ve made Skehans, and I’ve brought my friends inside.’

But he added: ‘I’m there, in Skehans with my nearest and dearest, but they can’t see or hear me. It’s like I’ve died and been sent to haunt them on a night out.’

Experts told the journalist it would take four people ‘a decent three months’ to do a good job of the computerised pub.

Yet Mr Cross, who had no past experience going into the project, was already committed to creating something within weeks.

He had Skehans’ landlord Bryan Fitzsimons find the building’s blueprints and fire across some pictures to base his design on. 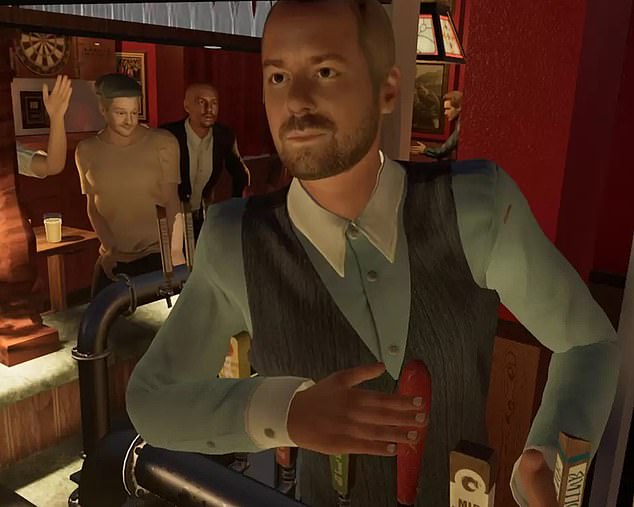 His design replicates in detail the establishment’s red walls, green suede bar stools and etched glass mirrors – as well as his friends who he likes to drink with

Using graphics software toolkit Blender and its add-on Archipack, Mr Cross surprised himself by finishing the basic structure in an afternoon.

But he hit a stumbling point when he was faced with the intricate designs of the windows and banisters, spending all day perfectly replicating the rails that hold up the bar in the 200-year-old pub.

Mr Cross also spent two days trying to do a good job of the dormer roofs and awnings, which he later admitted was a mistake.

Moving on to the inside of the pub, the journalist again chose to bring to life the bar’s minor details, meticulously copying the ‘exact grain of each of the pub’s floorboards’ before using Substance Painter for the establishment’s red wallpaper.

In a bid to capture the gloomy lighting British punters know and love, Mr Cross played around with candlelight and settled on what he described as between ‘rejected Harry Potter N64 game-of-the-film’ and ‘visible’.

He lined the walls with framed pictures of his friends and former Arsenal manager Arsene Wenger – to help speed up the process, before trying to match the shrubbery that runs up the outside of Skehans.

One area Mr Cross felt he could have done better was on the toilets and branded his version of them a ‘disgrace’ due to them being far too small.

After completing the building and detailing its interior, the creative moved on to the tricky matter of adding the all important pints – which he said took several days. 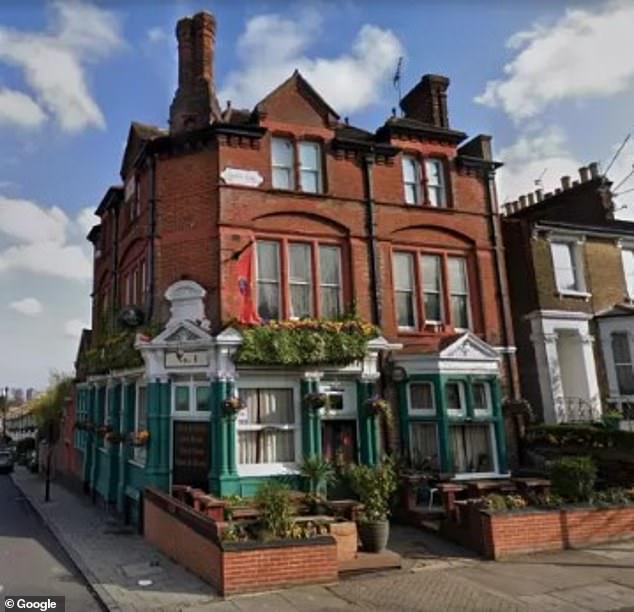 Experts told Mr Cross it would take four people ‘a decent three months’ to do a good job of the computerised pub (pictured, the actual establishment)

He used Unreal Marketplace software to create realistic beers that rolled around in the glass when they are tilted.

At this point Mr Cross felt like the job was done and entered his pub in VR – using HTC’s Vive Cosmos headset – for the first time.

But he realised the pub without the punters was not even close to the same experience.

This sparked an idea, with Mr Cross going back to the drawing board to design virtual versions of his friends to drink with him. 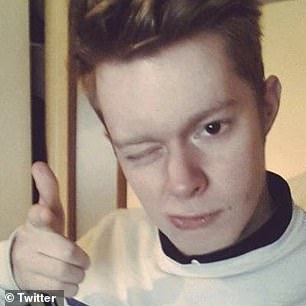 With assistance from developer Reallusion and after requesting passport pictures from his mates, the designer put them into the programme’s Character Creator 3’s ‘Headshot’ plugin.

He said within a few clicks the system created something akin to the person he wanted and if he had more skills he could have sculpted them in more detail.

The next task for Mr Cross was to make his characters move, which he achieved using motion capture suits borrowed off Xsens and Rokoko.

He got his housemates to don the jumpsuits and had them recreate an evening in the pub, running through typical pub scenes including waiting to be served and using a contactless card before facing the horror of it being declined.

Towards the end of his mission, Mr Cross had trouble rendering animated sequences on the laptop he was using and was forced to compromise on the quality of features including the lighting and detail he had spent hours working on.

But overall he had managed to create a ten-minute scene with numerous talking characters despite never using animation software before.

He added: ‘This is something which – not too long ago – would’ve presumably taken a team of people who actually knew what they were doing months. Now you can do it in your room, on your own, for a laugh.’