London is still the world’s most attractive financial centre despite doom mongering over Brexit, according to a survey today.

The City was placed ahead of New York, Hong Kong and Singapore for infrastructure and access to high quality staff.

London has also stretched the advantage over its US rival with concerns over Donald Trump’s stances on trade being blamed.

The City of London (pictured) was placed ahead of New York, Hong Kong and Singapore for infrastructure and access to high quality staff

New York was 24 points behind London, the biggest gap between the two since the survey started in 2007.

The dip in the American city’s score was ‘presumably due to fears over US trade’, according to the authors of the study.

The results could ease fears about the impact of Brexit on the UK’s status as a financial hub.

There have been dire warnings that tens of thousands of jobs could go and the government’s revenues could take a major hit if a deal is not struck with the EU.

Since the survey was conducted in June, Brexit negotiations have become increasingly acrimonious with David Davis and the EU’s Michel Barnier trading barbs.

There has also been a pick-up in the number of banks saying they plan to set up new EU subsidiaries after the UK leaves.

Frankfurt and Dublin are hoping to benefit from institutions insulating themselves from the effects of a poor agreement.

Lobbying group TheCityUK warned against complacency and called for clarity on its transitional arrangements for leaving the EU, which will apply beyond April 2019, when Britain is due to formally leave. 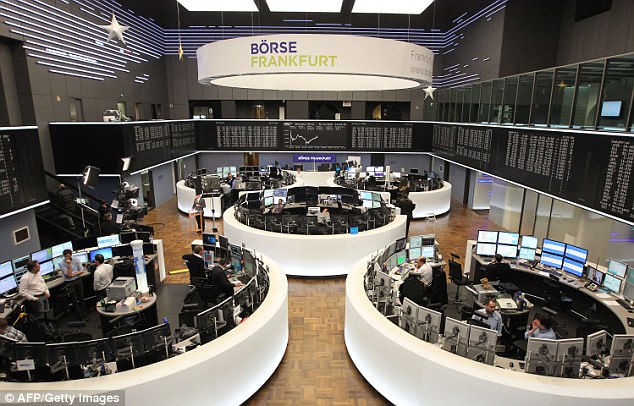 Frankfurt is hoping to benefit from institutions insulating themselves from the effects of a poor agreement. Pictured is the German stock exchange in the city

‘Absent this, many firms have already started to activate their contingency plans and others will undoubtedly follow suit if these aren’t confirmed as soon as possible – and by the end of this year at the very latest,’ said CityUK chief executive Miles Celic.

Frankfurt has moved up to 11th in the table from 23rd a year ago and Dublin has moved to 30th from 33rd.

Since becoming US President in January Mr Trump has pulled out of a planned trans-Pacific trade agreement and has pledged to be more protective of US trading interests.