Fewer than a third of commuters are satisfied with the value for money of their train journey, according to Transport Focus.

The consumer watchdog said the ‘continued weak performance’ of many train operators means the majority of passengers who rely on them to get to and from work believe they are getting raw deal.

Some 27,000 passengers were surveyed by Transport Focus in autumn 2017 – before the 3.4 per cent average fare rise earlier this month.

It was the largest increase in five years and has pushed up the cost of some season tickets by hundreds of pounds.

Transport Focus surveyed 27,000 passengers last year on their satisfaction with commuter rail prices. Only one third was satisfied with the value for money of their train journey. Pictured is SouthEastern railway franchise at London Bridge as passengers crammed into the train 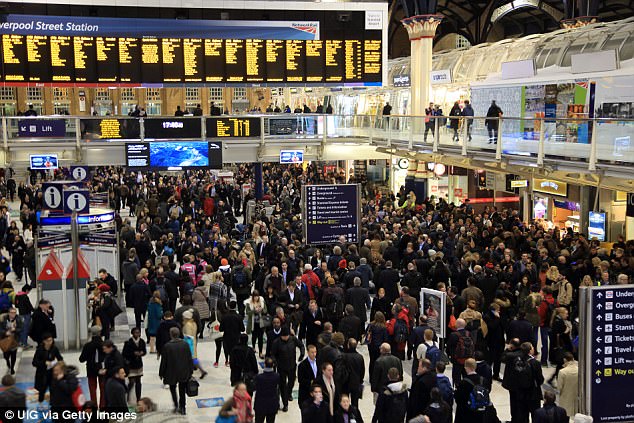 Passengers in the survey said train companies handled delays poorly. They said they are often stranded on platforms or stationary trains with no information. The Liverpool Street station (pictured) is often crowded with busy commuters trying to get to their destinations

The research was conducted during a year plagued by disruption caused by engineering works and the worst strikes on the railways in more than two decades.

Despite this, almost two thirds (65per cent) of commuters were satisfied with the punctuality and reliability of their service – up from 62 per cent.

The report – based on interviews with more than 27,000 passengers – found they are far more annoyed about how train companies deal with delays.

Passengers are often stranded on platforms or stuck on stationary trains are often frustrated by the lack of information they receive.

Only three out of 10 are satisfied with how train companies deal with delays.

Packed trains are also a bugbear for many commuters with 57 per cent satisfied by the level of crowding on their service.

The research found that four out of five (81%) of all travellers are satisfied with their journey, unchanged from the previous autumn.

Southern was the lowest-ranked operator with a score of 72 per cent. Despite being hit by strikes, this is up seven percentage points from a year earlier. Satisfaction levels on Thameslink and Southeastern also picked up.

But South Western Railway (SWR) suffered the largest year-on-year decline in satisfaction, from 83 per cent to 75 per cent. 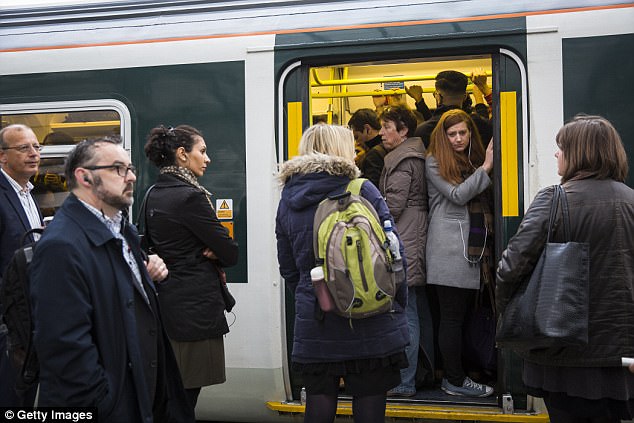 Southern rail service was the lowest ranked-operator out of all rail lines. Pictured is a Southern rail train as commuters packed into one of the cars

Performance on SWR routes has struggled to recover since major disruption caused by the upgrade at London Waterloo during the summer.

However, South Western Railway, TransPennine Express and Arriva Trains Wales passengers, among others, have been buffeted by poorer performance.

Train companies and Network Rail need to keep to their basic promises and deliver a relentless focus on day-to-day performance and better information during disruption.’

Grand Central topped the satisfaction table at 96 per cent, followed by Hull Trains (95 per cent) and Virgin Trains East Coast (92 per cent).

Jacqueline Starr, a managing director at the Rail Delivery Group, representing operators and Network Rail, said: ‘Four out of five journeys were rated satisfactory or good by our customers but we know there is much more to do, which is why rail companies are working together with a long term plan to change and improve.’