By Nick Craven In Creggan, Londonderry, For The Daily Mail

Police investigating the killing of journalist Lyra McKee in Northern Ireland say this picture of a young man in ‘Team9’ jogging bottoms could hold the key to unmasking her murderer.

The officer leading the inquiry believes the suspect knows the gunman.

He is of ‘significant interest’ and among 30 individuals police want to identify.

Police investigating the killing of journalist Lyra McKee in the Creggan area of Londonderry, Northern Ireland, said this picture of a young man in ‘Team9’ jogging bottoms could hold the key to unmasking her murderer

Detective Superintendent Jason Murphy told The Mail on Sunday: ‘He’s heavily involved in the disorder that takes place before Lyra was killed.

The two are linked – the disorder provided a platform for the shooting to take place.’

However, DS Murphy’s officers are confronting a ‘wall of fear’ that is preventing witnesses from coming forward. 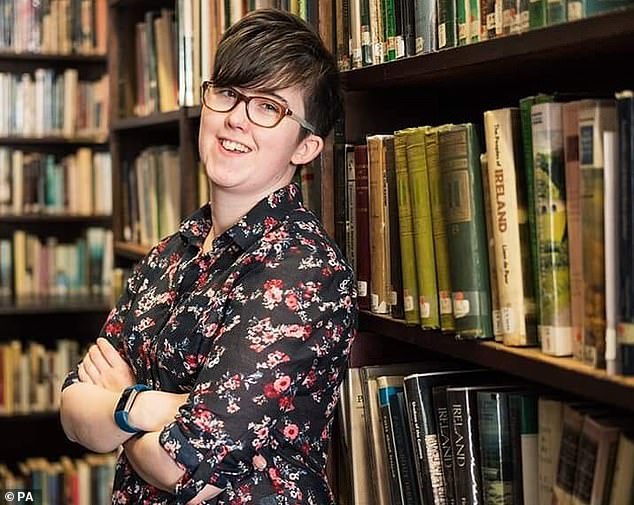 The officer leading the inquiry believes the suspect knows the gunman who killed Lyra (pictured). He is of ‘significant interest’ and among 30 individuals police want to identify

The staunchly Republican community of the Creggan estate in Londonderry was appalled by the shooting on April 18 of the 29-year-old journalist and gay rights campaigner.

While 150 people from the area have come forward with information or mobile phone footage, DS Murphy knows he remains a long way from securing a conviction against members of a dissident Republican splinter group known as the New IRA.

On the estate, two chilling signs warning: ‘Informers will be shot’ and ‘RUC informers: They will forget about you. We won’t’, have appeared since Lyra’s murder.

‘An extremely small minority here continues to hold the community to ransom and exert force and intimidate them,’ DS Murphy said.

‘It’s a wall of fear that I’m trying to break down.’

Research by Bellingcat, the website which unmasked the Russian agents involved in the Salisbury nerve agent, has highlighted various distinctive items of clothing worn by suspects involved in throwing petrol bombs and firing the fatal shot on April 18. 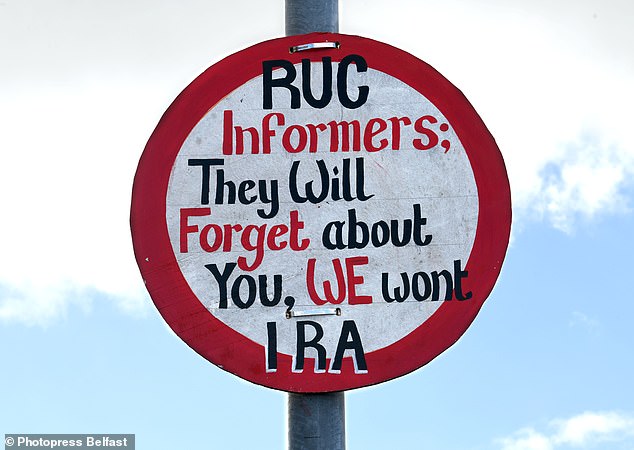 The New IRA willingly admitted one of its henchmen fired the bullet that killed Lyra — ‘by accident’. Pictured: The New IRA has put up new ‘roadsigns’ in the Creggan and Bogside area of Londonderry, some near where Lyra was shot dead

The TEAM9 item was produced by fashion chain H&M, although staff at its store in Londonderry say it was only sold there in children’s sizes.

The firm’s head office said it believed the item was sold by them.

Seven arrests have been made and 12 searches carried out, but no weapon has been found and officers fear any clothing worn by the gunman and his associates has long since been destroyed.

Yesterday, thousands of people marched through Belfast in Lyra’s memory as her partner Sara Canning called for same-sex marriage to be legalised in the province as it is on the mainland.

‘I dreamt of marrying the woman I love and spending the rest of my life with her and doing my best to make her happy and know that she was loved,’ she said.

‘That dream was one I shared with Lyra, but it was snatched away too suddenly.’