Shoppers are fighting over bottled water after a major pipeline burst near Hampton Court Palace – cutting off supply to thousands of families in south and west London.

The situation has been described as a ‘nightmare’ by disgruntled residents, with as many as 100,000 properties left with little or no water since around 8am today.

Areas including Teddington, Richmond and Twickenham have all been affected. As have Sunbury and Hampton – where the pipe is reported to have burst.

As bottled water supplies dwindle, scenes of ‘pandemonium’ have been described in supermarkets amid reports of ‘fighting’ over remaining supplies.

Local schools have also reportedly closed as a result. As have leisure centres and other businesses affected by the water outage.

Marcus Garvey took to Twitter to share an image of empty shelves at Waitrose in Twickenham. Much of the bottled water had been taken due to the burst pipe 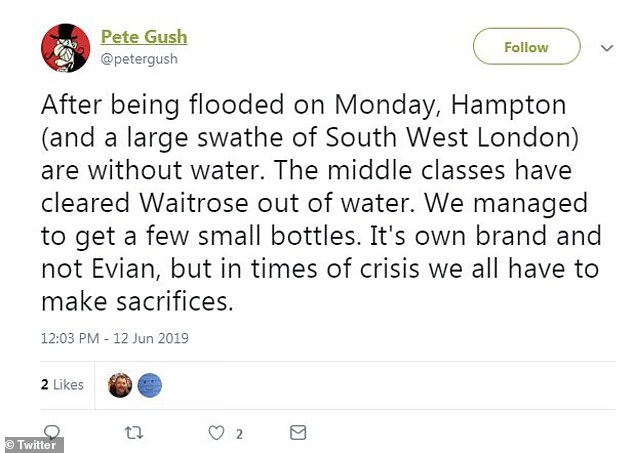 Writing on Twitter, Heather recalled frightening scenes in her local supermarket as locals fought over the remaining bottled water supplies.

She said: ‘People have already been fighting over bottled water at my local supermarket. So much for the Blitz spirit, it’s survival of the fittest. Remember your housebound and vulnerable neighbours.’

While Marcus Garvey posted an image of empty shelves at Waitrose in Twickenham, asking: ‘What kind of compensation are you going to give everyone Thames Water?’

Peter Gush, also from the area, said: ‘After being flooded on Monday, Hampton (and a large swathe of South West London) is without water.

‘The middle classes have cleared Waitrose out of water. We managed to get a few small bottles.

‘It’s own brand and not Evian, but in times of crisis we all have to make sacrifices.’ 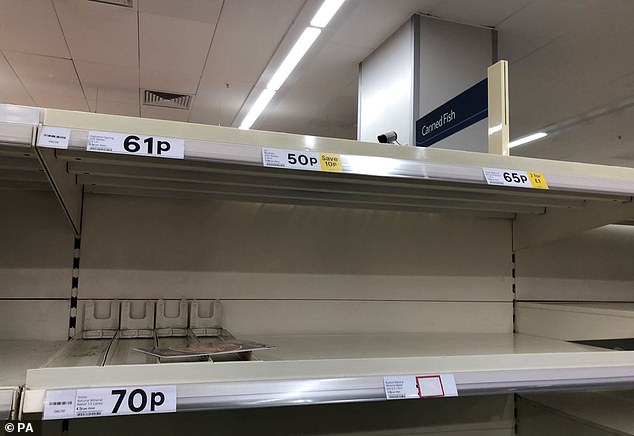 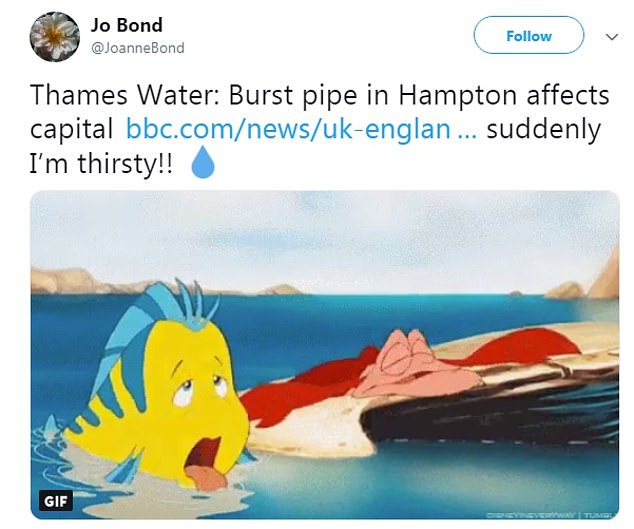 Twitter users questioned Thames Water over when they would be given bottled water, as many supermarkets had started to run out (above and below)

And Neda Tootoonchi, who runs an events company, tweeted a picture of her local supermarket bereft of any bottled water at all.

She wrote: ‘No water in the whole of Teddington, Richmond, Twickenham, Hampton and Sunbury. This is the current situation.’

Dozens of other enraged locals have taken to social media to ask when supplies will be restored. Many raising concern over the length of time it is taking to restore running water.

Writing on Twitter, one said: ‘Water has been off for more than three hours and we have four children under three and a half years old in our home today.’

While another wrote: ‘[Water] down to a drip. Please let us know how long this is likely to take. Surely you should be sorting out logistics for water delivery sooner rather than later?’ 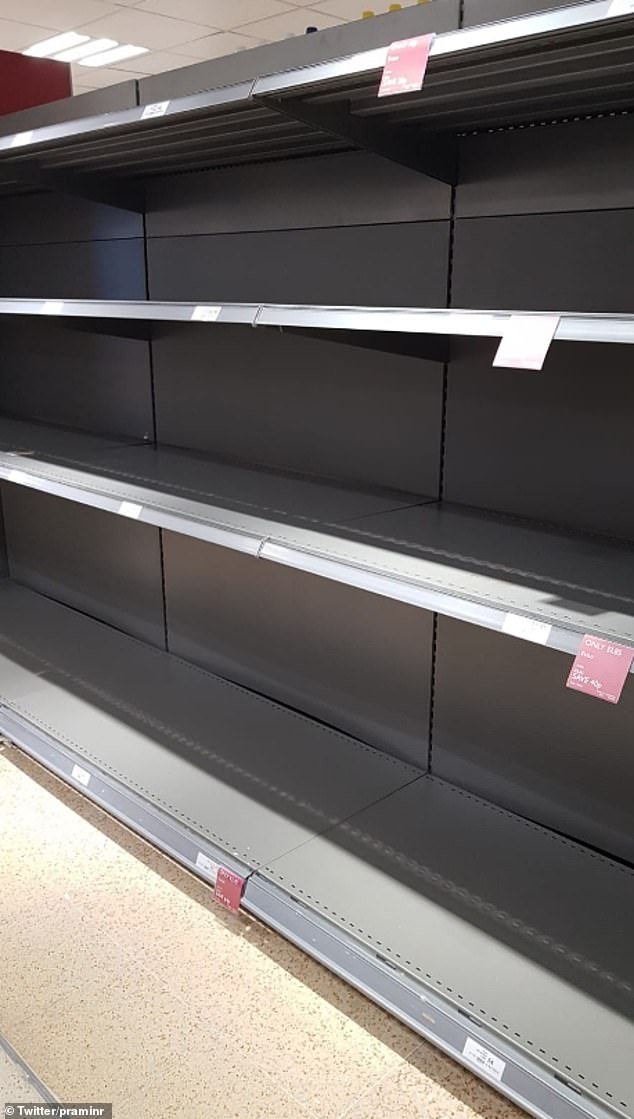 There were empty shelves at this local supermarket following the burst water pipe. Twitter user Pramin Raut said: ‘So about that bottled water…’

Thames Water has responded to the online concerns, saying that should supplies not be restored soon bottled water will be distributed.

It tweeted: ‘We’re sorry to anyone whose water supply has been affected by a burst on a large pipe at our water works in Hampton.

‘A team of engineers are there investigating and we have more experts planning how to get water back on for our customers as soon as we possibly can.’

All planned clinics and sessions at Teddington Memorial Hospital, including the Urgent Treatment Centre, and Teddington Health and Social Care Centre were cancelled.

A number of GP services have also closed.

Trafalgar Junior School in Twickenham, which has been left without flushing toilets and washing facilities in the kitchen, has sent children home.

Radnor House School in Twickenham also closed at 10.30am but exams were still taking place.

Hampton Court Palace has also been affected by the leak, but at present plans to remain open. Historic Royal Palaces tweeted to confirm the news.

It said: ‘Please note that Hampton Court Palace has been affected by a water leak in the area. At present, the palace remains open, and the HCP Festival will go ahead tonight.

‘We have contingency plans in place and will be monitoring the situation – keep an eye on our feed for updates.’ 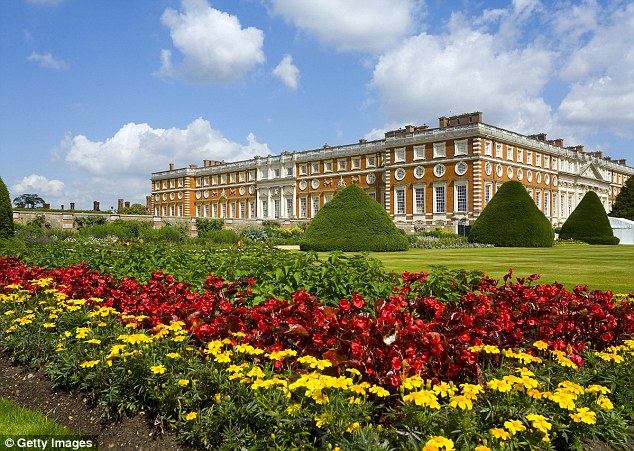 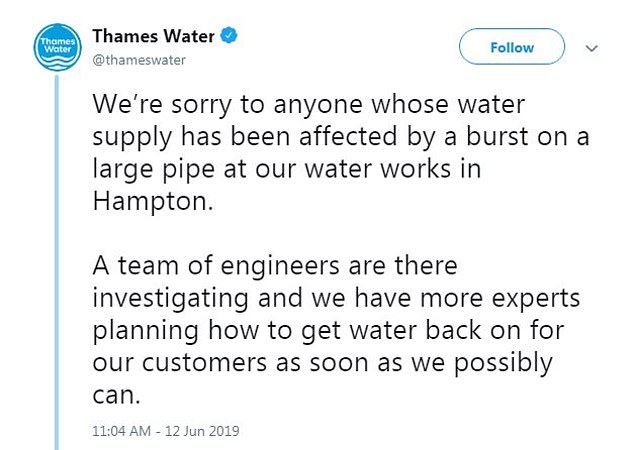 Thames Water addressed concerns online, tweeting an apology to those affected. It said it is working to restore supply as soon as possible

An all-weather fixture due to be held at Kempton Racecourse has however been cancelled following the water supply issue. Clerk of the course Barney Clifford had to call off proceedings.

He said: ‘We were notified at around 9am that there was a major water burst in the Hampton Court area.

‘We have very slow or no running water and with Thames Water unable to provide a timeline of when it will be rectified, we’ve unfortunately had to abandon racing due to both equine and human welfare.

‘We have very little running water and we will run out before too long as things stand. We did manage to store some water for the horses that arrived overnight.

Mayor of London Sadiq Khan said it was ‘unacceptable that so many people are left without water for several hours with little or no information on when supplies will be restored’.

He said he expected Thames Water to compensate all those affected.