These remarkable photographs offer a glimpse into the lives of the eccentric Londoners who roamed the streets of the capital in the 1920s.

An escapologist, a telephone wire inspector suspended in mid-air and a Pearly Queen with her Pearly King son are among the characters featured in the recently unearthed portraits.

The images are thought to have been taken by photographer Thomas Donald McLeish from 1926 and 1927, who first gained prominence taking aerial war pictures.

Born in 1879, Mr McLeish joined the Royal Naval Volunteer Reserve (RNVR) in the First World War and was sent as a photographer to Port Said.

But when the war ended, he returned to London, living in Canonbury and capturing life after the conflict in the capital.

While the upper classes may have sighed in relief at the end of the fighting, but life at home was still harsh for the working class, who had to rely on their wits to scrape a living on the streets.

Pictured: A cats’ meat man making deliveries in London. The workers would tour the streets of the capital wheeling horse meat that was deemed unfit for human consumption for felines to feast on. The sellers were among the most popular in the city and would flog their treats for a halfpenny 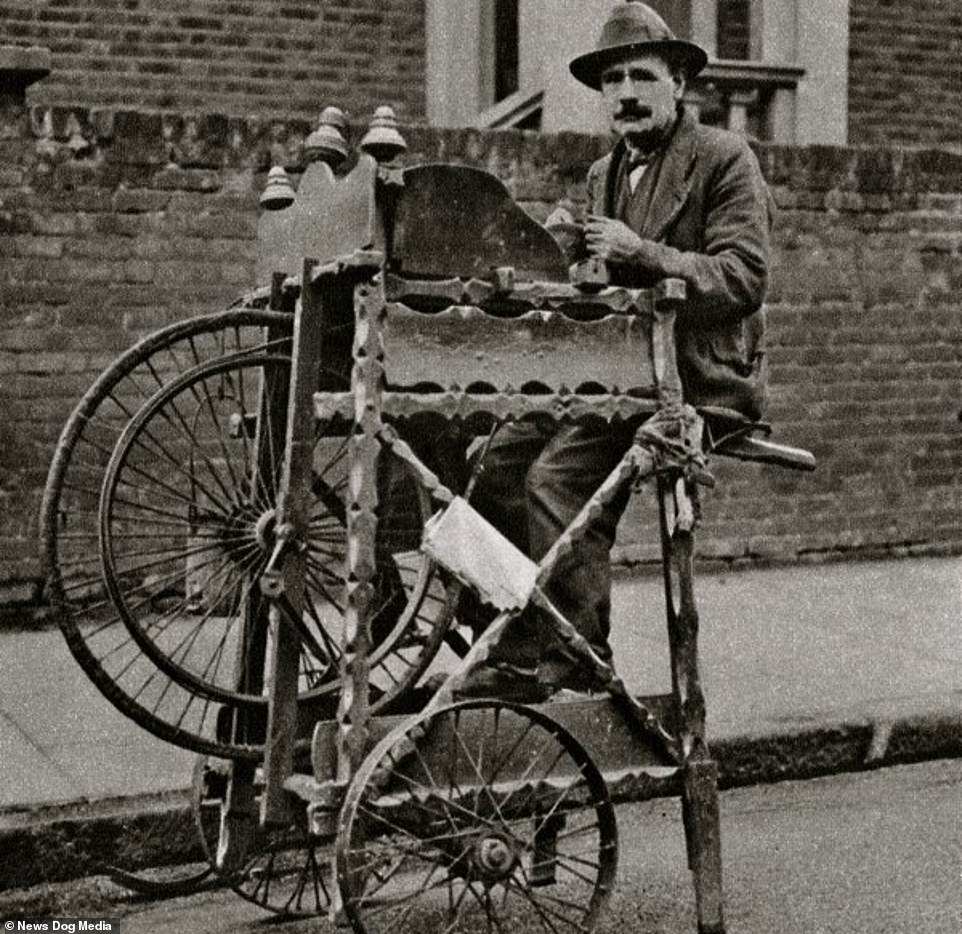 Pictured: A knife grinder sits ready to sharpen knives and other cutting tools. The contraption on which he is sat works by him pedalling in order to turn the two larger wheels, which in turn move the grindstone that sharpens the blade. Knife grinders endured well into the 1960s before they disappeared from street corners 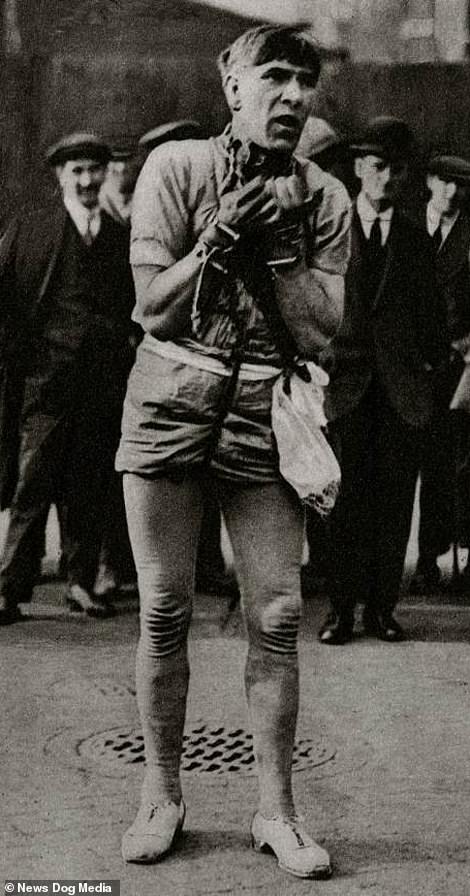 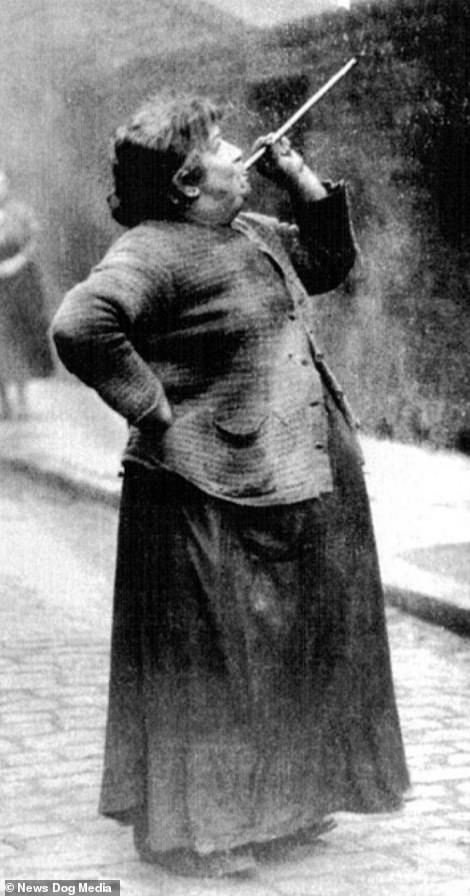 Pictured, left: An escapologist attempts to break free from a strait-jacket as he entertains theatre-goers while they queue in the street as they wait for the doors to open. Right, Mary Smith performs her duties as a knocker upper by shooting peas at the windows of sleeping workers. Essentially a human alarm clock, the knocker-upper profession endured despite alarm clocks having been invented, mainly due to the fact that the ones on the market were expensive and unreliable 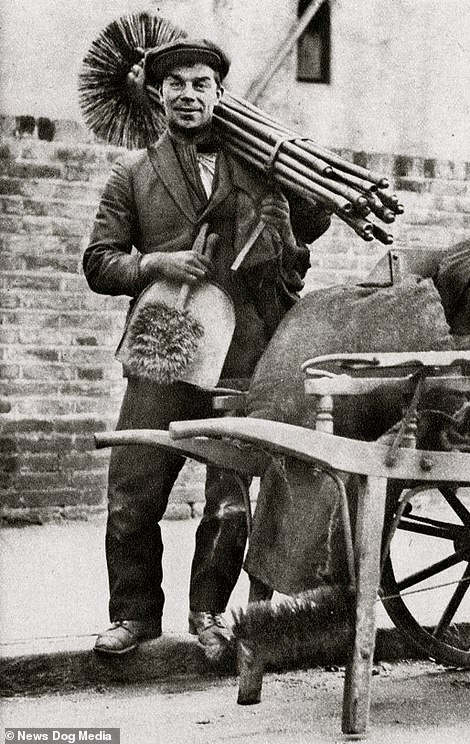 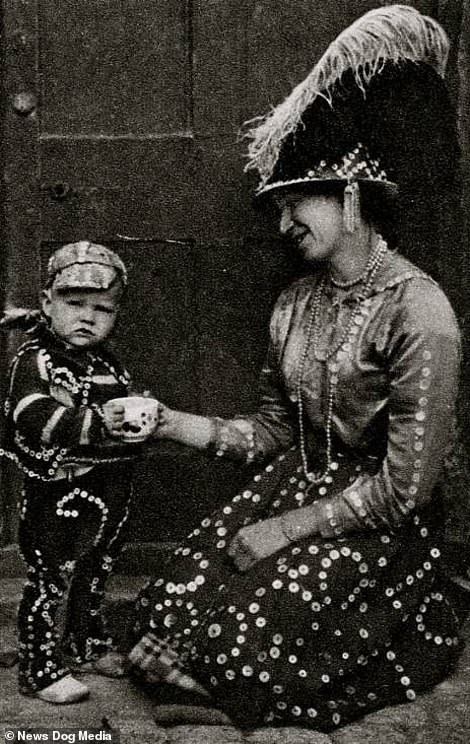 Pictured, left: A chimney sweep prepares to clear the stacks of London of their soot and, right, a Pearly Queen mother and her Pearly King son. The fruit and vegetable sellers wore elaborate suits covered in mother-of-pearl buttons to sell their produce and still exist today as a charitable organisation 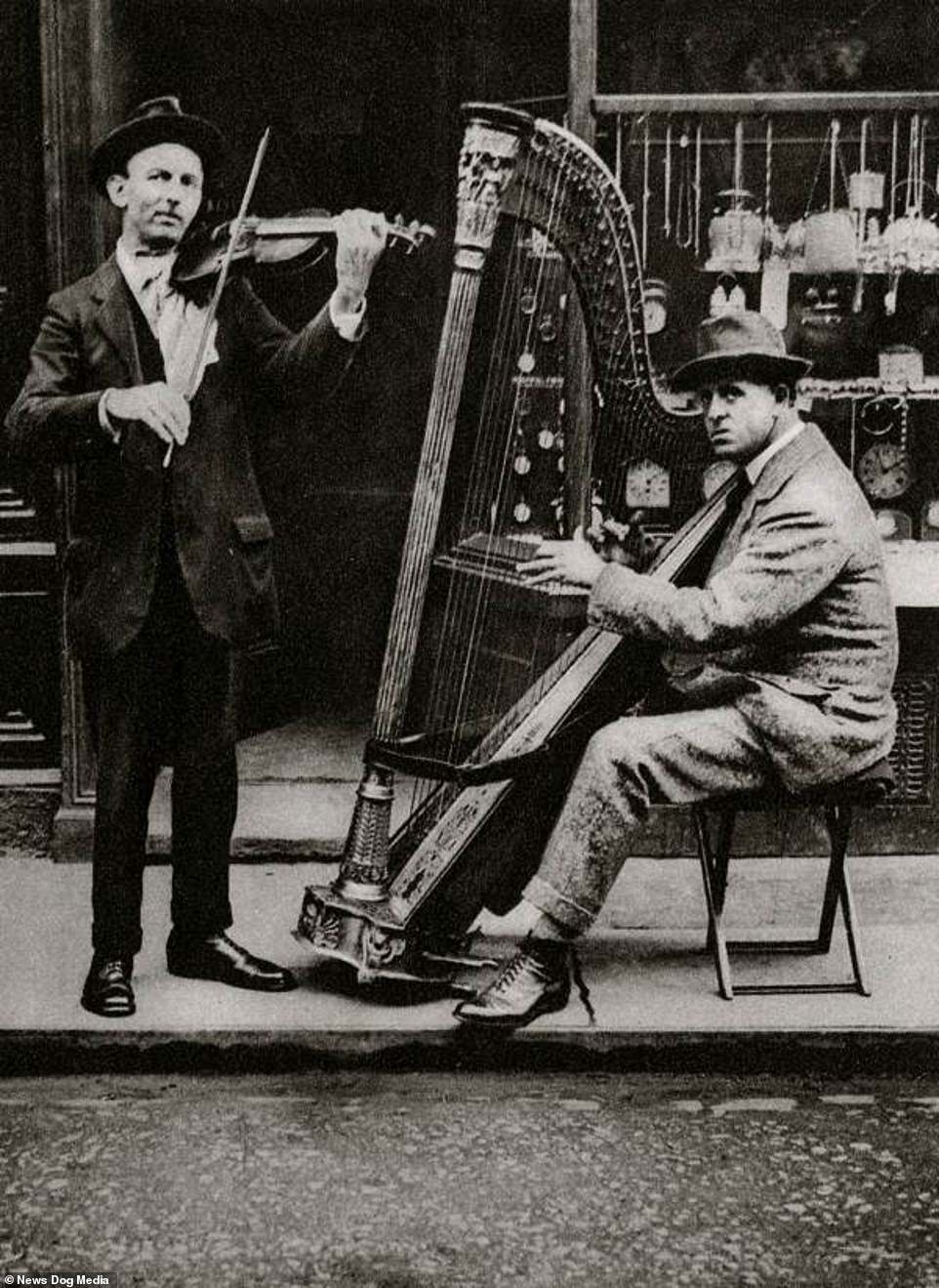 A wandering harpist and accompanying violinist are pictured busking in the capital. Just like the escapologist pictured in this collection, duos such as this would offer entertainment to people as they stood in queues to catch a show in London. The harp – a rare sight on today’s streets – was a popular form of street entertainment during the roaring twenties and the instrument is thought to date back as early as 200 BC 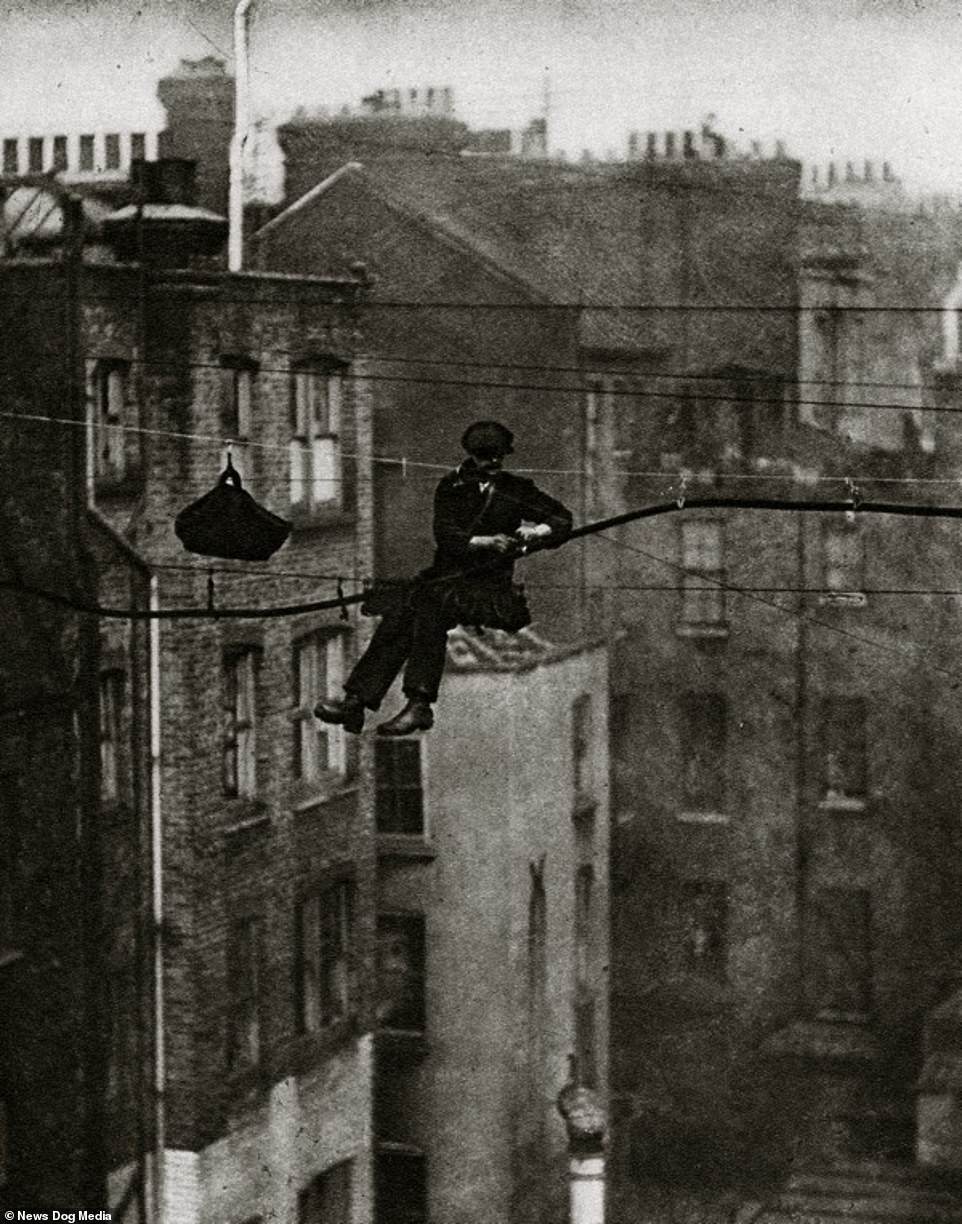 This astonishing photograph shows a cable worker suspended on a line, mid-air in Mayfair. The daring workman is pictured as he inspects a telephone cable hundreds of feet above the ground, surrounded by the tall terraces that during that decade would sprawl out from central London (pictured) across to its greener, more pastoral reaches 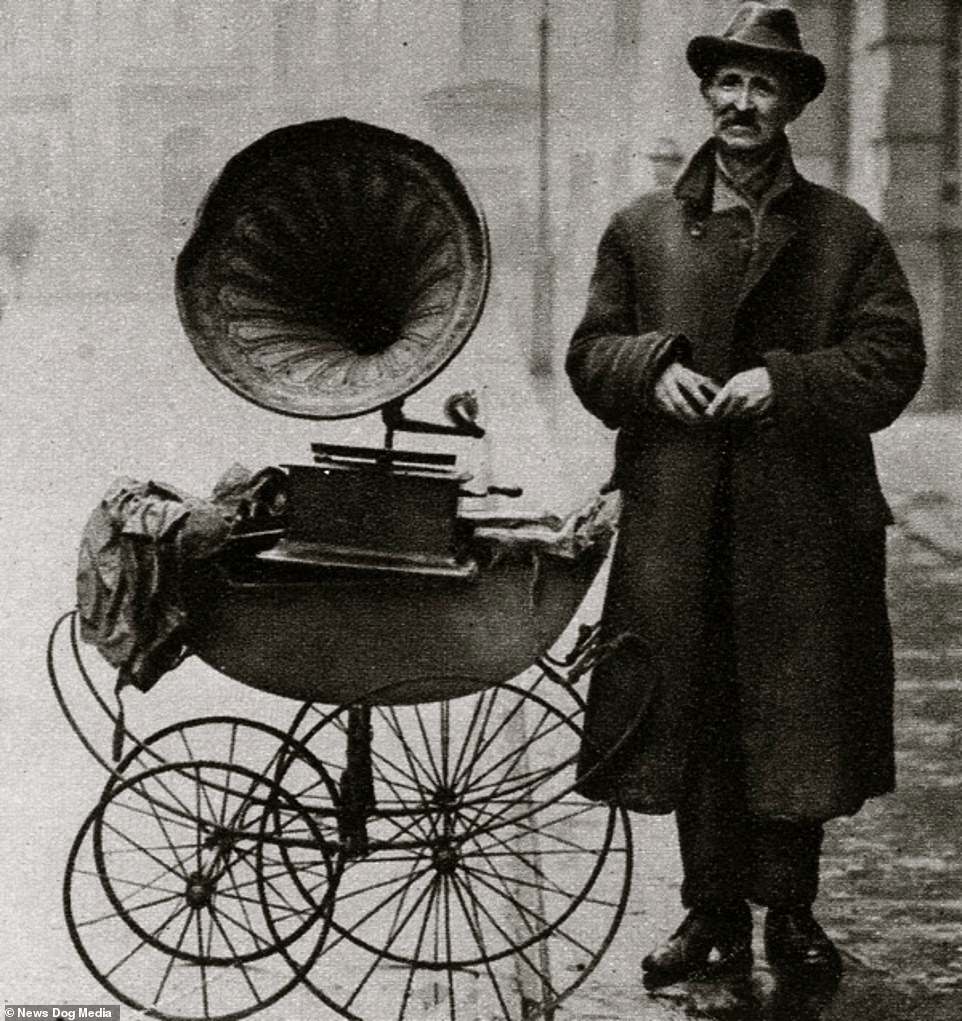 Gramophone men would wheel their record players over the capital’s cobbles, offering music-lovers a soundtrack as they went about their day. Rather than the speakers and amplifiers that would one day allow ordinary people to hear songs at ever-increasing volumes, these machines worked by boosting the volume via a huge horn on top of the contraption. The worker would have to wind the gramophone manually in order for the vinyl record to spin 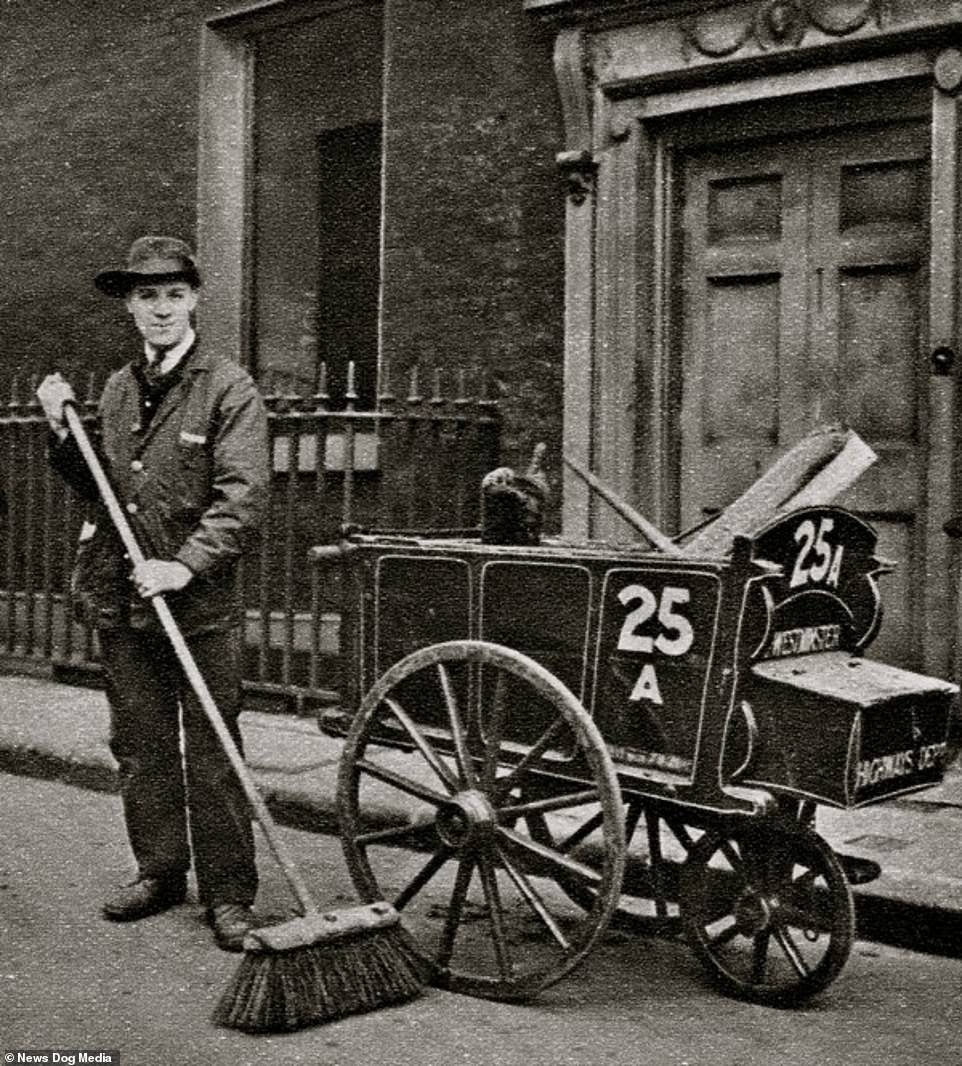 Whereas today’s Londoners might be familiar with council workers slowly driving a motorised sweeper through the city, the road sweepers on the roaring twenties had to clean London’s roads manually. They would also have to wheel their tools by hand, laboriously pushing and pulling what resembles a giant wheelbarrow through the streets 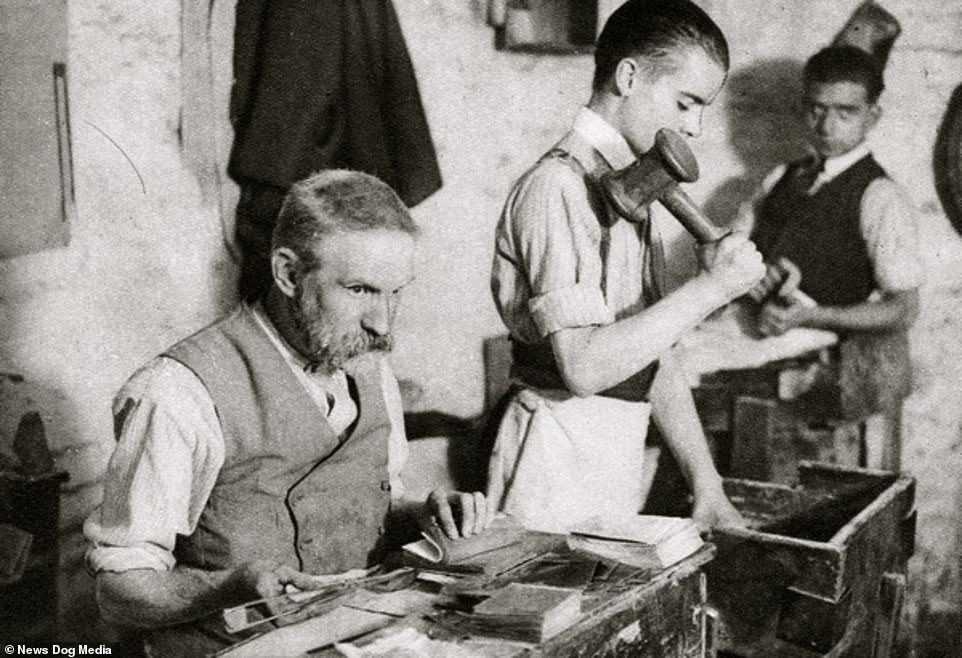 Pictured: Gold beaters hammer the previous metal in a London workshop. The process of gold beating involves repeatedly hitting a chunk of gold until it is flattened and stretched into a piece that is thin enough to be used in gilding

Pictured, left: A District Messenger wearing his uniform while making a delivery. The messengers would don pillbox hats as they delivered telegrams throughout the capital. They would make their deliveries by bicycle. Right: A scavenger is pictured in the capital 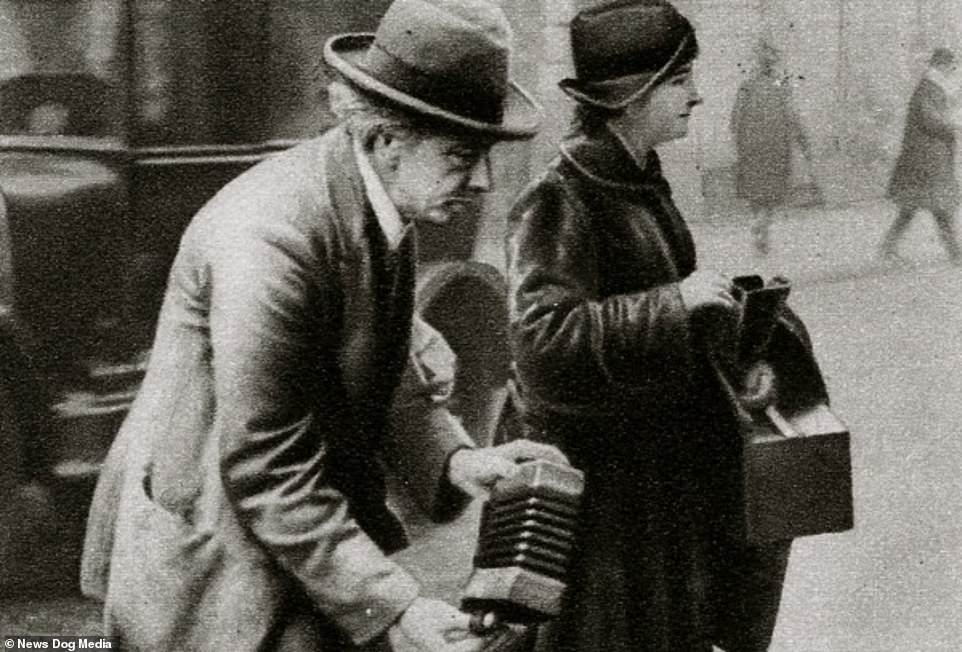 A concertina player entertains passersby in the capital circa 1926. The concertina is a free-reed instrument comparable to the accordion, but much smaller. It features expanding and contracting bellows, with buttons on both ends 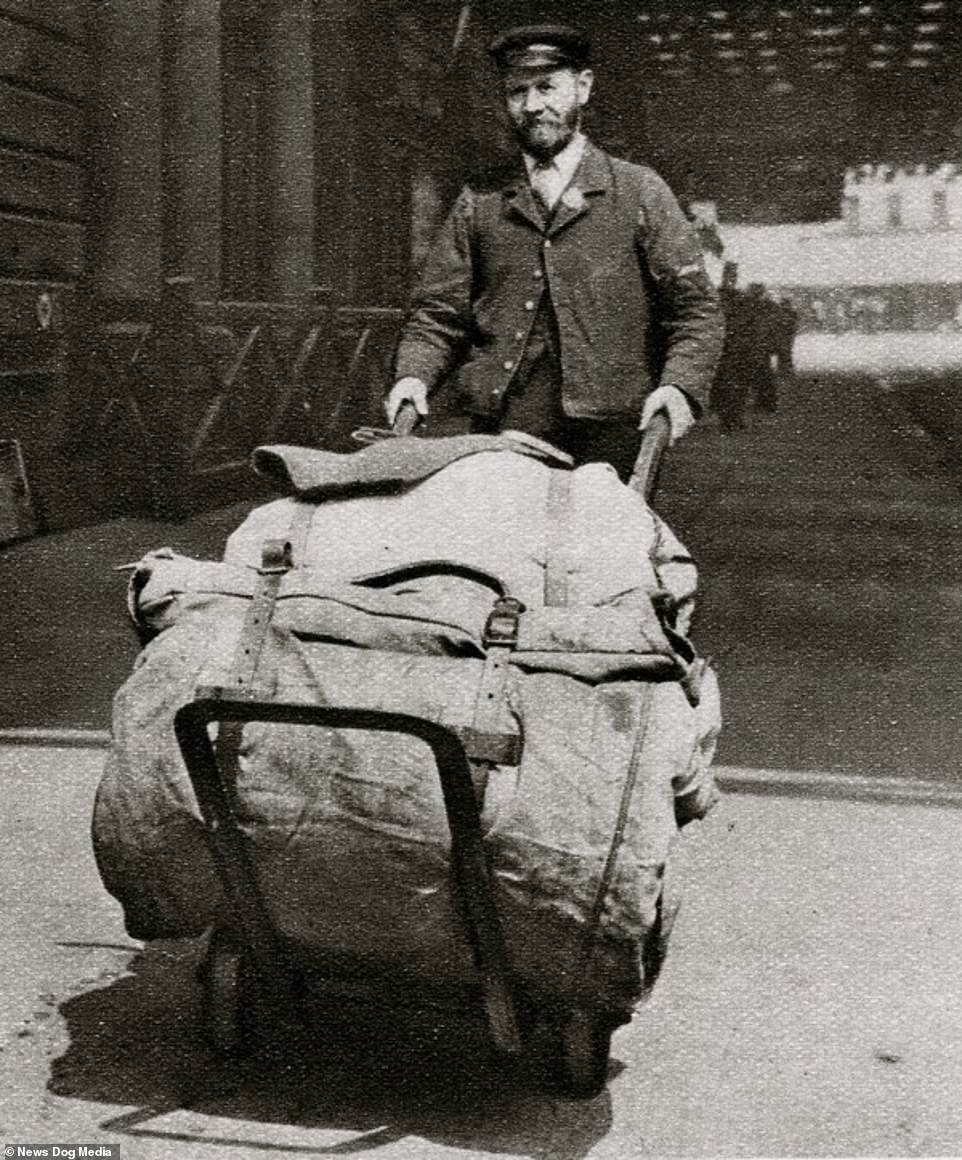 Pictured: A railway porter wheels passengers’ bags through a station in London. As well as providing general assistance to commuters and holidaymakers, the porters handled the loading, unloading and distribution of parcels 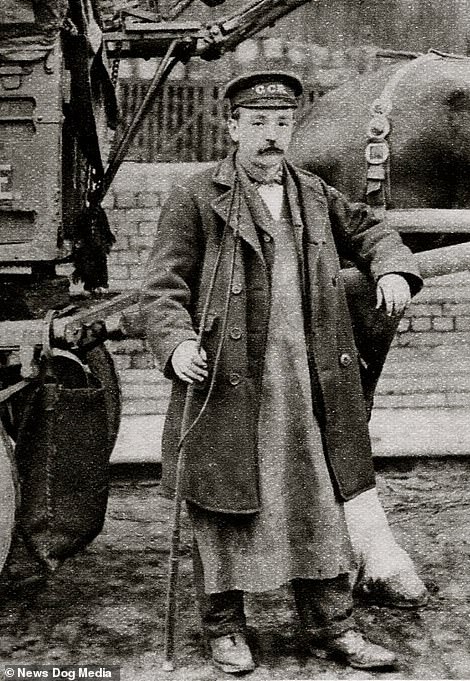 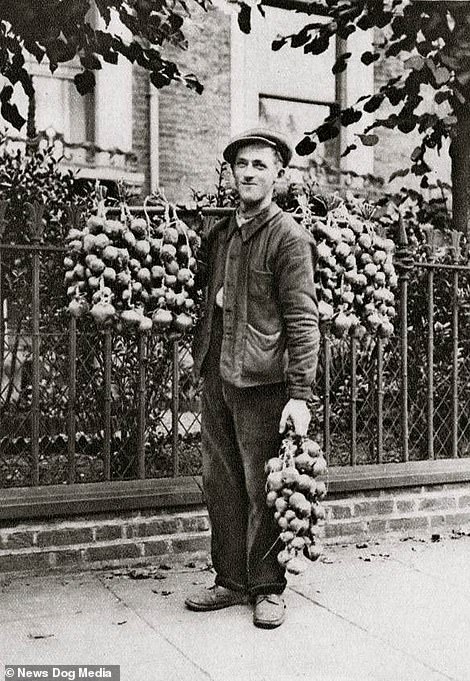 Left, a car man stands ready to transport customers by horse and cart and, right, an onion seller tries to flog his produce in the capital, going door to door with his impressive array of vegetables as he hopes to sell them to hungry families 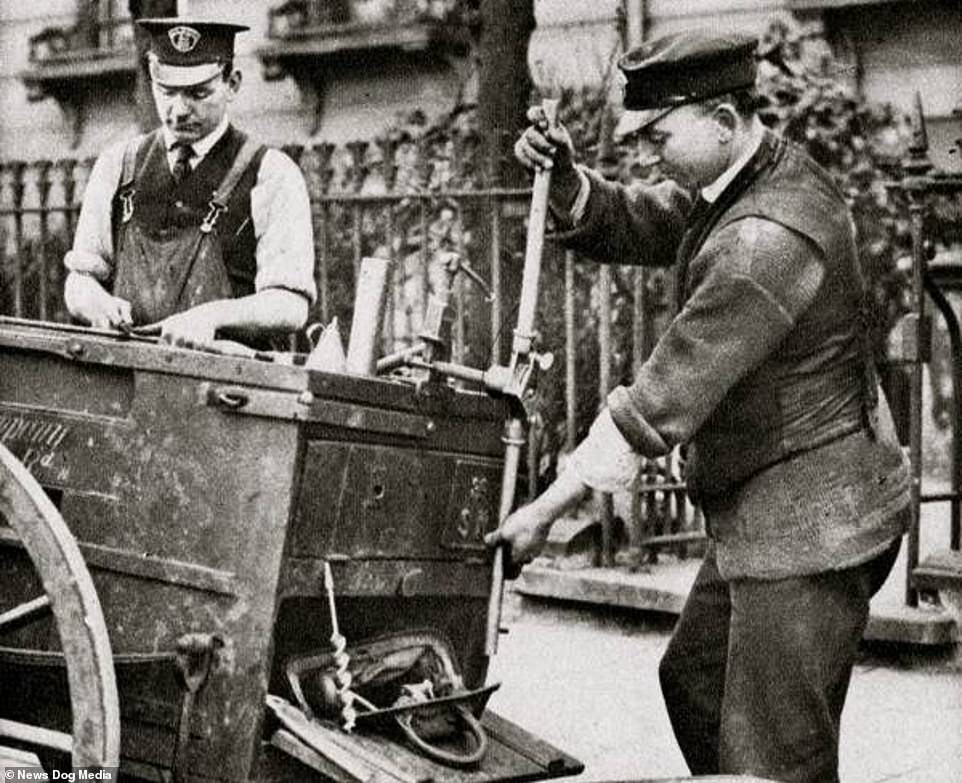 The fascinating collection of photographs features these gas fitters, the roaring twenties equivalent of the technicians seen overseeing gas supply in modern London. The Gas Regulation Act of 1920 introduced a national basis for the testing and reporting of gas quality, meaning that fitters such as these were under even greater scrutiny 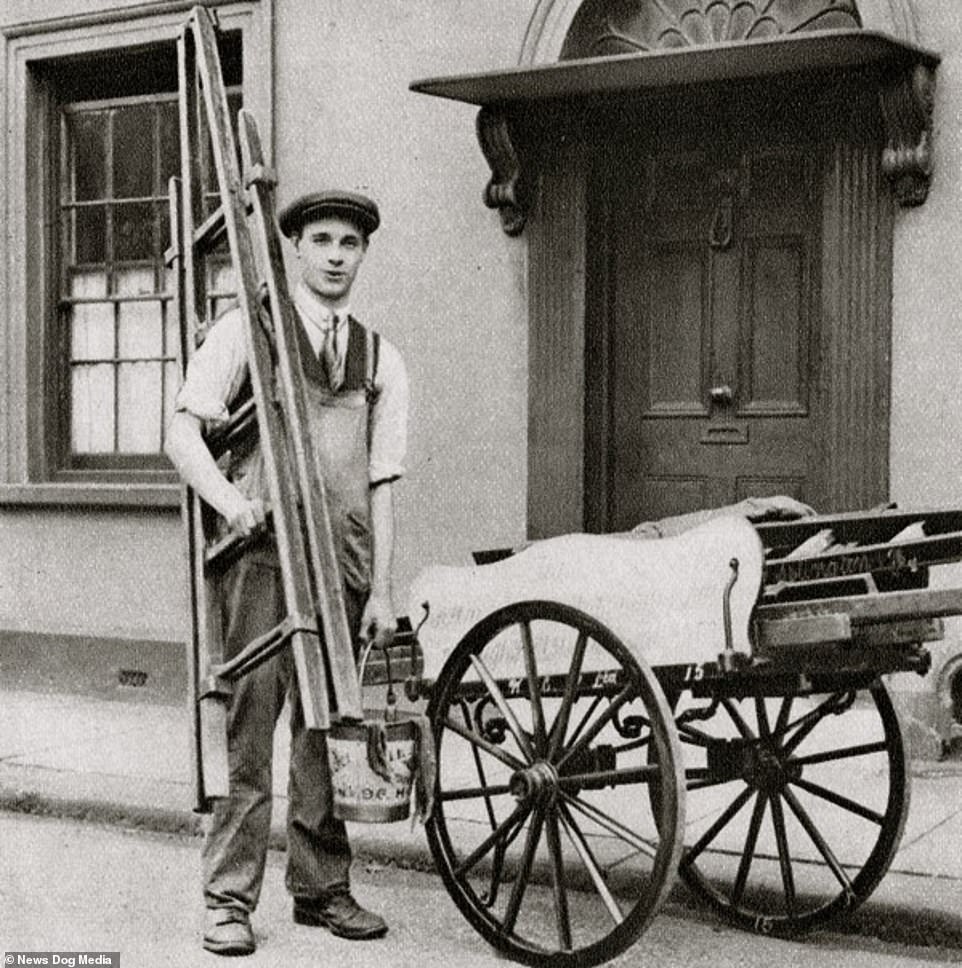 This window cleaner is pictured in Islington, carting his soap from door to door as he earns a living by scrubbing the dust and dirt from panes across the capital 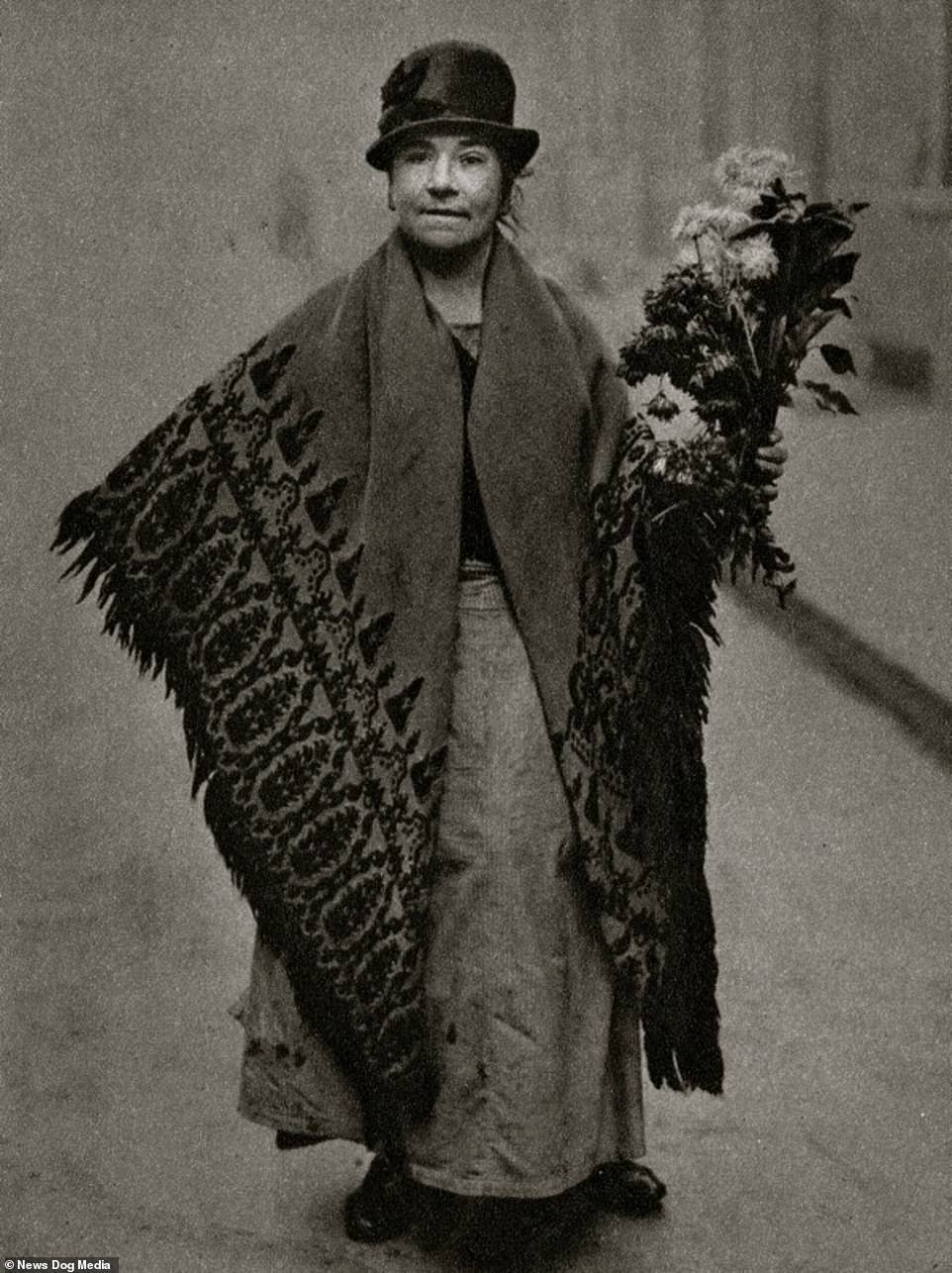 Pictured: A flower seller in London wraps up warm in a shawl as she stands on the street offering the romantic gift to couples she catches walking by

Who was photographer Thomas Donald McLeish?

Thomas Donald McLeish was born in the capital in 1879 and struck up a passion for photography in 1893 he joined Eliot and Fry as a negative clerk.

McLeish began teaching photography at the Regent Street Polytechnic in central London in 1900. Ten years later, after a stint at Cowe Whelan & Co crafting cigarette cards, he went freelance as a photographer.

He soon carved out a reputation by supplying photographs to journals such as the Illustrated London News and National Geographic.

In 1916 he joined the Royal Navy Volunteer Reserve and was deployed to take pictures in Port Said (pictured, below ships during a ceasefire). McLeish captured some of the earliest aerial war pictures in the First World War. 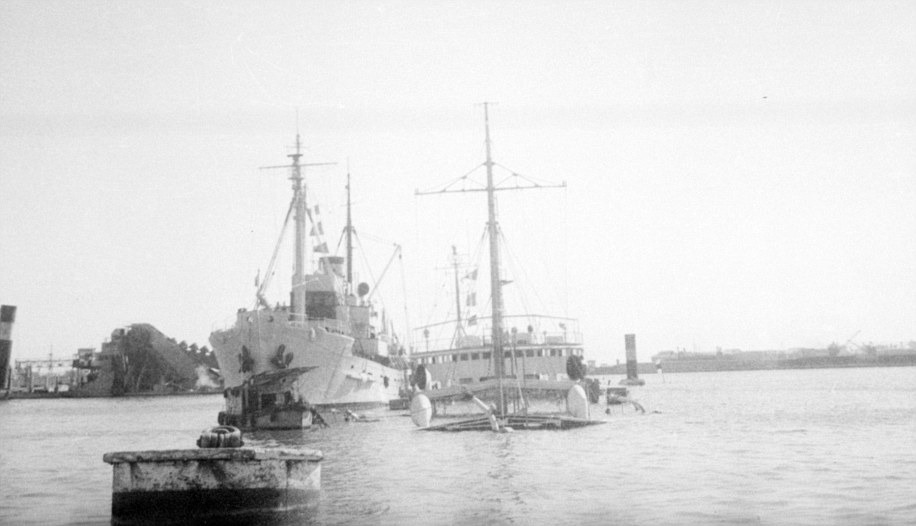 After the conflict he lived in Canonbury, London, and developed his library of some 3000 photographs, mostly of Europe and the Middle East.

His pictures of the capital show it at a time when urban sprawl was swallowing up the countryside, an expansion that would see the population reach more than 8million by 1939.

Technically minded McLeish made his own camera, which used 5×4 glass plates. His creation was exhibited in the Science Museum and is now at the National Museum of Photography, Film and Television, in Bradford, west Yorkshire. He moved to Wimbledon at the start of the Second World War before dying in 1950.