Revealed: London’s famous Strand could go traffic free under £28m plans to turn one of capital’s most congested streets into green haven for pedestrians

A 650-foot stretch of London’s famous Strand could go traffic-free under clean air plans that would turn one of the capital’s most congested streets into a haven for pedestrians.

The £28million proposal by Westminster City Council could see the major thoroughfare in the heart of the city transformed into a public plaza complete with grass lawns and seating areas.

A public consultation on the ambitious proposals was launched today, with planners hoping that work on the pedestrianisation could start early next year, should it be given the final green light.

More than 14million people visit the Strand Aldwych area every year, making it a bottle-neck for buses, cars and vans travelling between the West End and the City.

The plans would be the roads which currently divulge around St Mary le Strand Church – which is situated in the middle of the Strand – torn up and paved over. 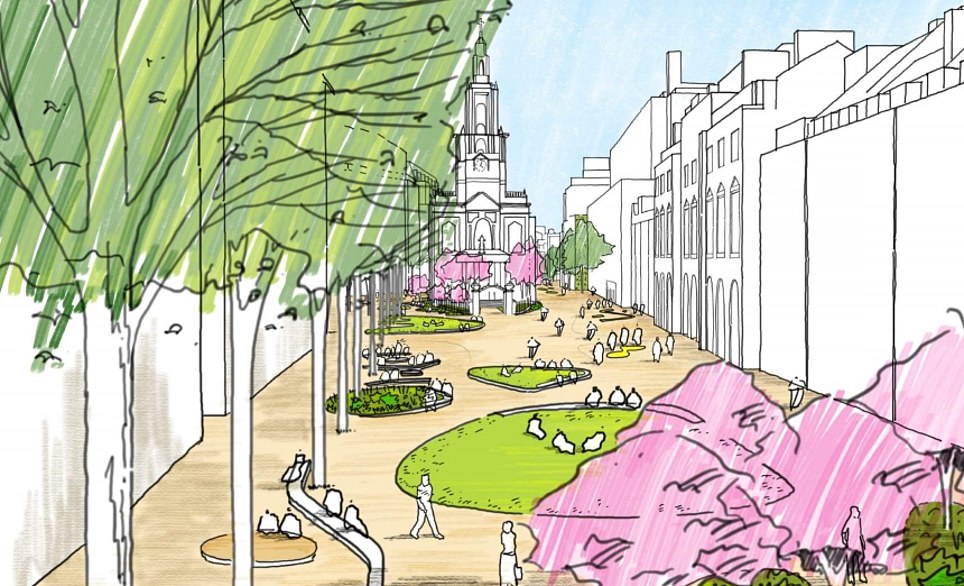 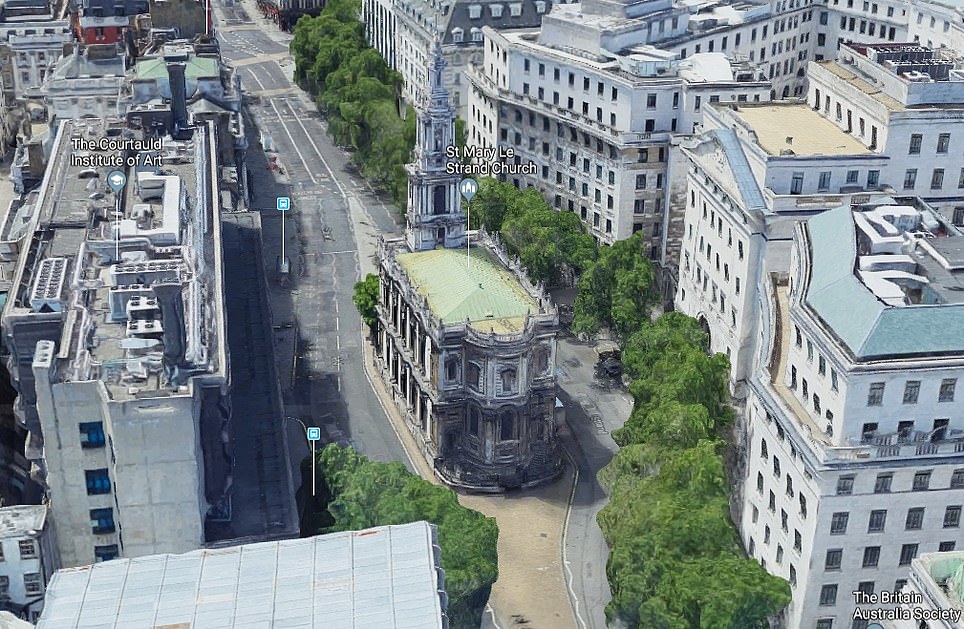 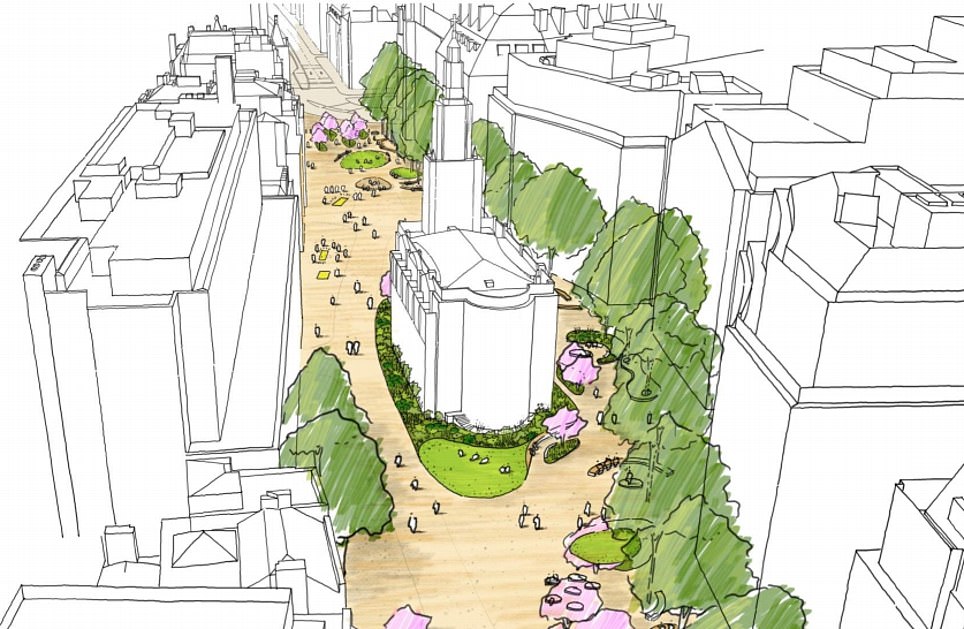 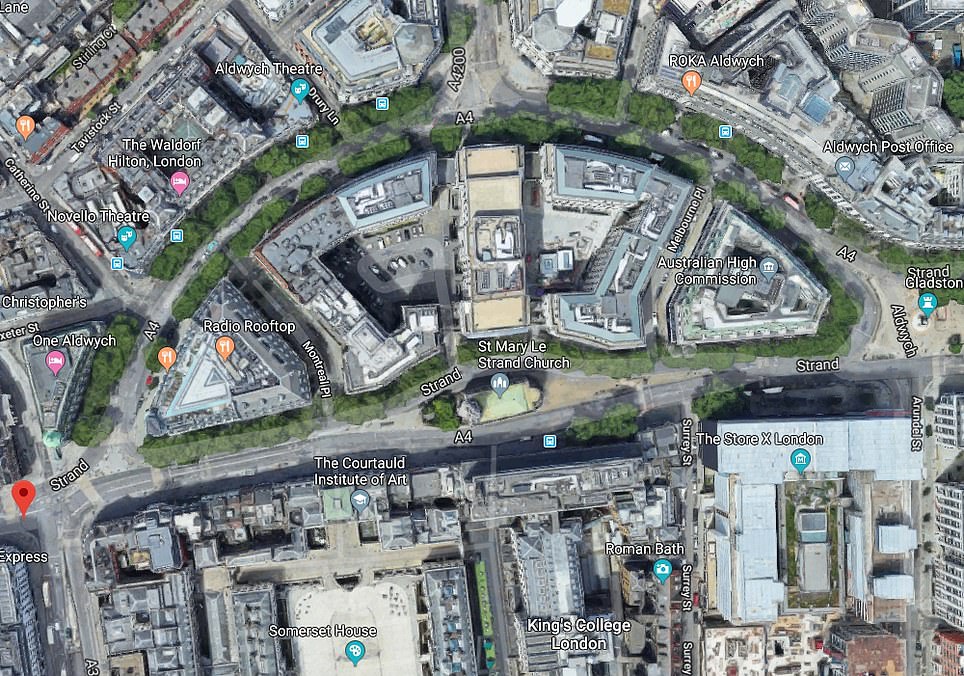 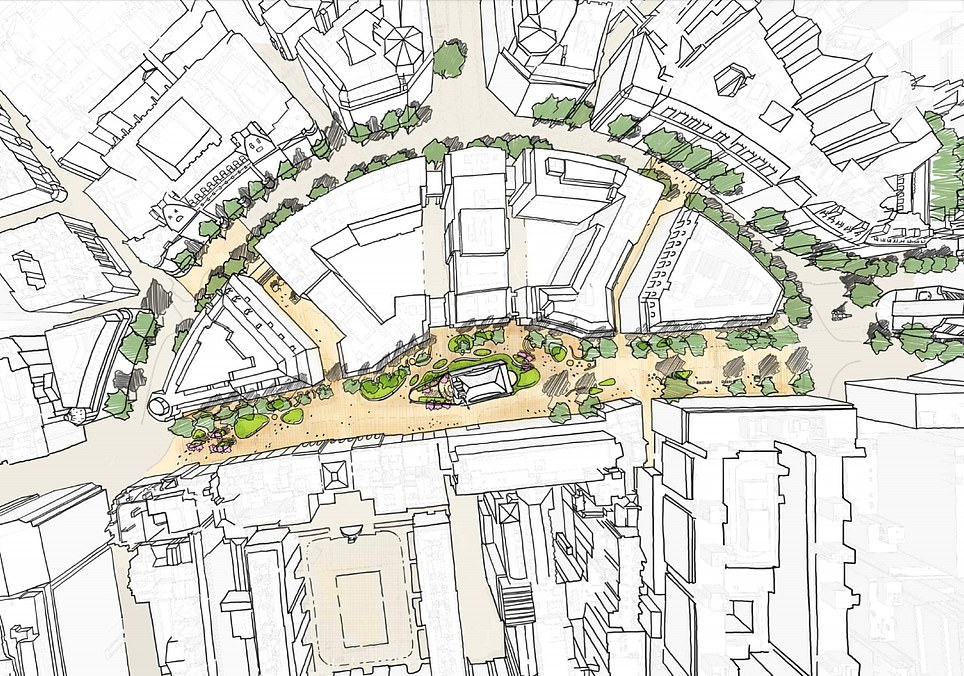 As part of the overhaul, Aldwych would be converted from a gyratory that varies from three to five lanes to a two-way street with several pedestrian crossings.

Landmarks such as Somerset House and King’s College London would become mainly accessible to the public from the plaza, transforming ‘Strand Aldwych into a world-class cultural and learning quarter’, the council said.

Councillor Richard Beddoe said: ‘This historic gateway into the West End is home to some of the capital’s most famous cultural and academic institutions, as well as a major leisure destination in its own right with landmark theatres, hotels and other attractions.

‘But the future success of the area is at risk because of traffic, poor air quality and inadequate public spaces. So working with local organisations we’ve developed some fresh ideas for the Strand Aldwych.

‘These concept designs have come together following a great deal of discussion with local groups and we now want to get as much feedback as possible.

‘Nothing is set in stone at this stage and we look forward to having constructive discussions as to how we can deliver a world-class scheme that benefits Westminster and London for many years to come.’

To see more on the consultation, visit strandaldwych.org 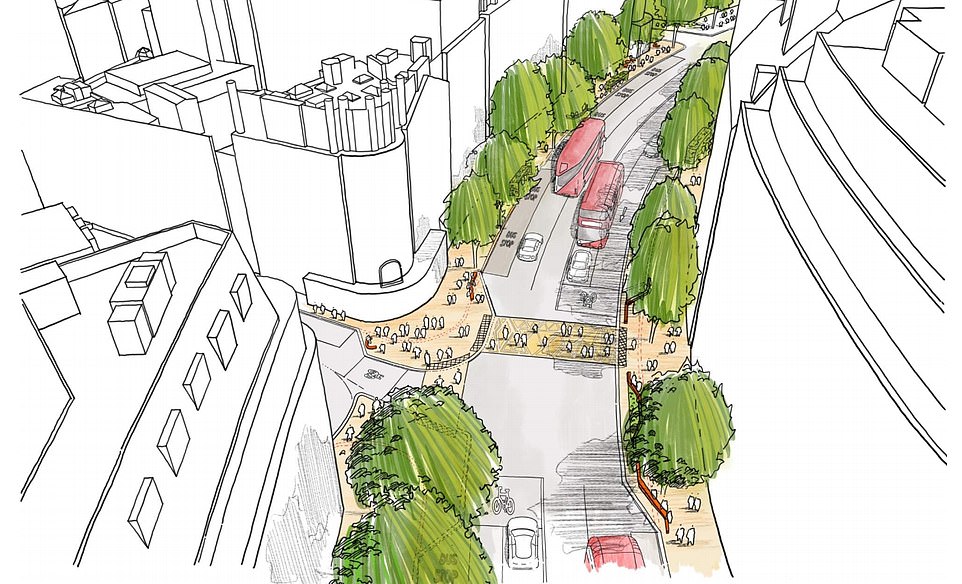 As part of the overhaul, Aldwych (pictured) would be converted from a gyratory that varies from three to five lanes to a two-way street with several pedestrian crossings 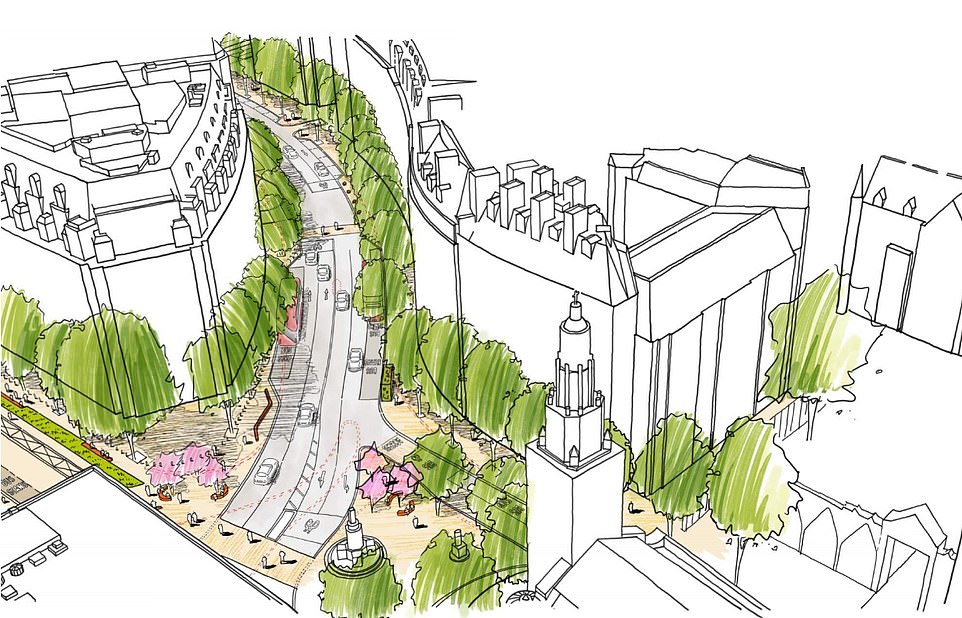 More than 14million people visit the Strand Aldwych area every year, making it a bottle-neck for buses, cars and vans travelling between the West End and the City.

Plans to pedestrianise parts of London’s Oxford Street were ‘off the table for good’, Westminster Council announced last year.

The authority said it has withdrawn support for the scheme in a letter to residents following two high-profile public consultations.

London mayor Sadiq Khan described the decision as a ‘betrayal’ and said it ‘posed a real threat’ to the future of the shopping area.

Council leader Nickie Aiken called for a ‘rethink of the whole strategy’ and said the council will work on proposals to improve the district.

She added: ‘Doing nothing to improve the area is not an option either if we are to maximise the potential benefits from the opening of the Elizabeth Line. 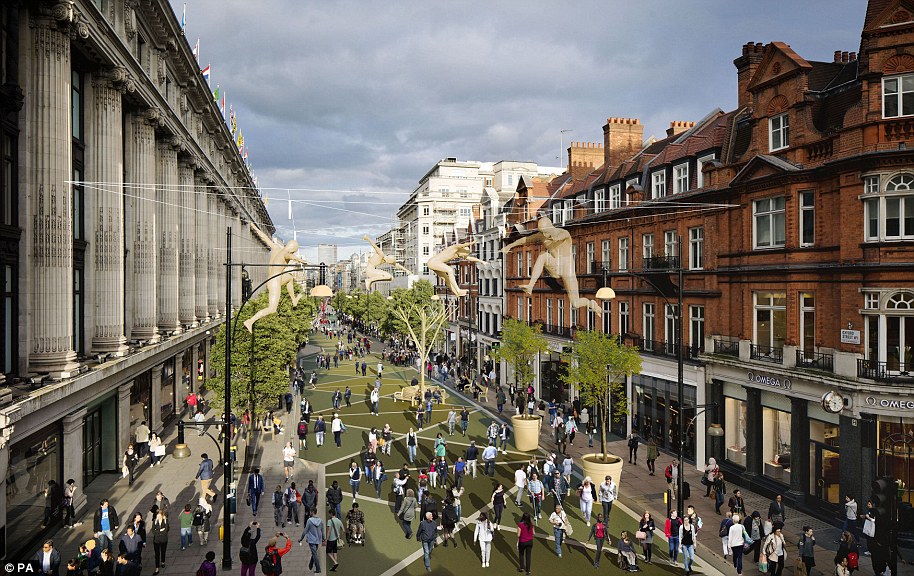 Plans to pedestrianise parts of London’s Oxford Street (shown) were ‘off the table for good’, Westminster Council announced last year

‘We must future-proof Oxford Street and the surrounding district so it remains the pre-eminent shopping district in the UK and maintains its crown as the nation’s high street in an ever-changing business and retail environment.’

The measures were set to be implemented by December to coincide with the launch of Elizabeth line services, which is expected to boost visitor numbers.

Mr Khan said: ‘This will be seen as a betrayal of the millions of Londoners and visitors to our city who would have benefited from making Oxford Street a safer, healthier and better environment.

‘All the main mayoral candidates agreed on the need for the pedestrianisation of Oxford Street at the last election, as did Westminster Council until today.’

He added: ‘This now poses a real threat to the future of Oxford Street, which could not be worse timed, coming on the same day House of Fraser announced they will be closing their Oxford Street store.’ 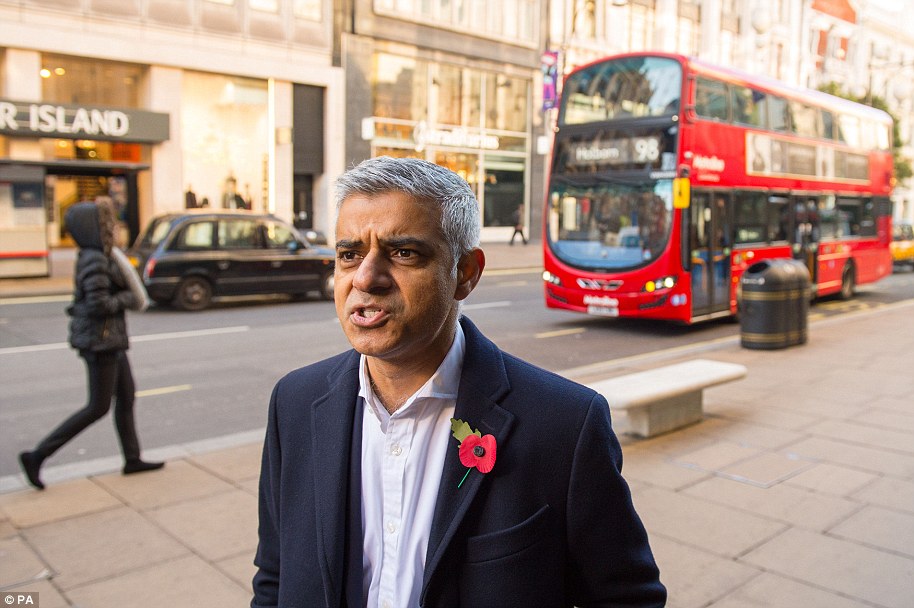