London’s The Hoxton is busy, buzzy and sometimes a little barmy

It’s not obligatory to have your laptop, tablet or any other snazzy device up and running in the huge lobby at The Hoxton in London’s Holborn — but you might feel undressed if you don’t.

To be under 30 and beautiful helps, too.

So even if you’re insecure in any tiny way, you must adopt a stiff upper lip hipster-style — which means reclining on a sofa as if on the set of a Tom Ford movie, ideally drooped over a love-interest while nursing a Goodness Me cocktail (single malt, pomegranate liqueur, sloe gin, sage syrup, lemon juice, Angostura bitters, egg white and raspberries). Headphones still on, of course. 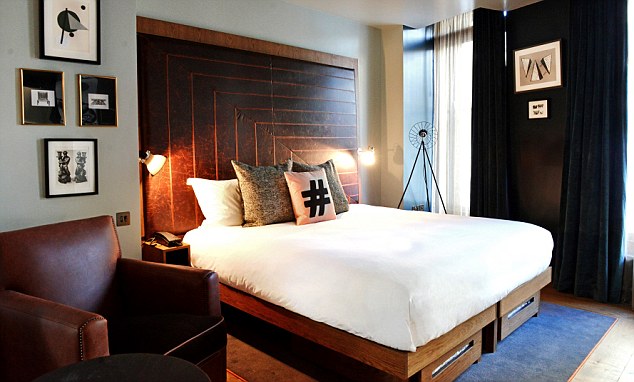 There are various categories of rooms at The Hoxton: Shoebox, Snug, Cosy and Roomy

This is The Hoxton’s second hotel in London (Shoreditch was the first) and it’s a lot of fun if you’re in the mood. It’s busy, buzzy and at times a little barmy.

How long can industrial chic go on?

The ceiling here is cement, or at least, that’s the look. There’s not much colour anywhere, but it’s got lots of flair in the public areas, where people park themselves for the day and use it as an office. Free wifi, coffee shop, inviting bar with zillions of different gins, people coming and going.

‘The numbers are on the floor rather than on the doors,’ says the male model at reception. You would expect nothing less.

It’s pitch black walking along the passage to Room 515, but just as you’re about to panic, a light comes on. It’s like one of those old-fashioned ghost trains, where you go round a corner in darkness before being startled by some illuminated nasty.

There are various categories of room: Shoebox, Snug, Cosy and Roomy. I’m in a Shoebox (the smallest and cheapest — but not at all cheap on this occasion at £229.)

The website warns that if there’s two of you, ‘be prepared to get up close and personal’. There’s not much space in the bathroom, either, where the shower floods the floor — which is either intentional or there’s something wrong with the drainage. 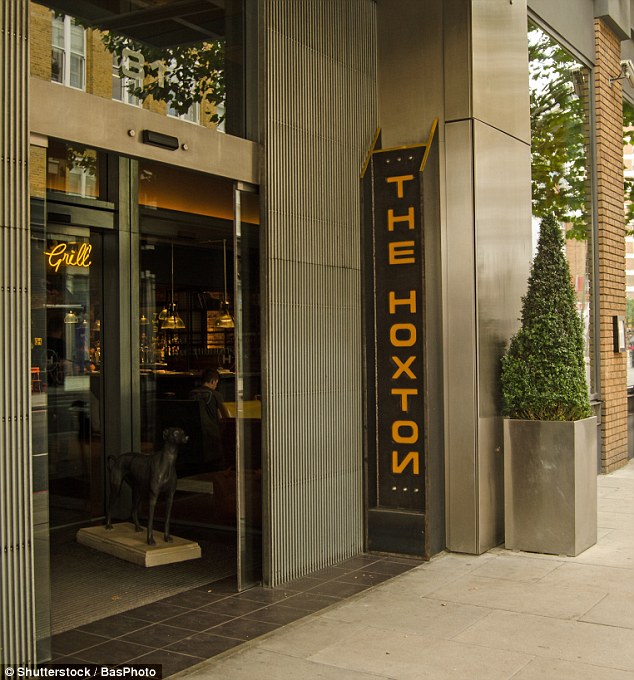 The Hoxton in Holborn is the brand’s second London hub. The first is in Shoreditch (above)

The hotel directory is called the ‘Survival Guide,’ the bill is ‘The Damage’ and so on.

Down in the basement is the Chicken Shop restaurant, which, yes, just does chicken on a spit. I eat upstairs in noisy Hubbard & Bell, where the ribs are U.S.-diner-style huge, and get chatting to a waitress who’s ‘between’ acting jobs.

She says it’s an ‘exciting place to work’, but hopes to quit as soon as possible.

Hang an empty paper bag outside your door before turning in and it gets filled in the early hours with orange juice, a granola pot and a banana.

On the way down to the coffee shop in the morning, I ask a fellow guest — an American — if she has ever seen inside a prison. ‘No, but I don’t need to after hearing the clank of those doors.’ She’s quick, alert and in the moment. Very Hoxton.

I order an extra-strong latte but nothing arrives, which is entirely understandable given the chaos at the coffee bar. So after checking out I pick one up at Pret a Manger, a bastion of calm compared to the Hoxton. But not nearly as trendy.

Travel Facts: Plan your own stay

Doubles from £99, including breakfast bag