This is the incredible moment a brave shop worker fends of three knife-wielding attackers all by herself.

Sundeep Kaur, 24, was running her father’s shop alone in Coulby Newham, North Yorkshire, when the hooded thugs walked in.

She said she knew it was ‘fight or flight’ time as the suspects burst in to demand cash – but they quickly found out they’d picked the wrong shop.

As one of the masked trio brandished a knife at her, brave Ms Kaur stepped towards them, whipped out a can of criminal identifier spray and aimed it at their faces.

One of the knife-wielding raiders appears to threaten Ms Kaur, urging her to hand over some cash 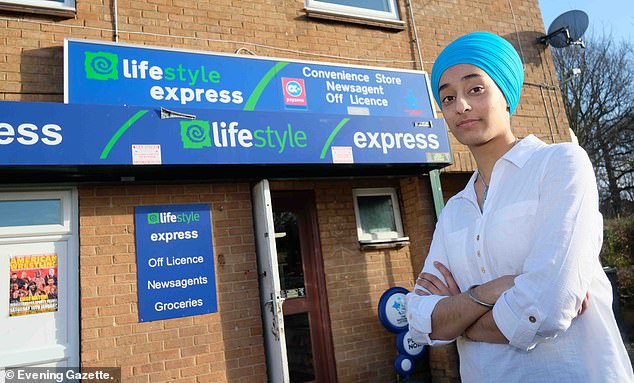 The spray is a red gel which stays on the skin for around seven days.

‘It’s hard to really have time to think, the first thing to do was to defend myself,’ she said.

‘I kind of just saw the knife and I thought “I don’t want to get hit by this.”

‘I pushed back and moved forward to them.

‘I tried to aim in the face and get the ones trying to get away.

‘They did run pretty quick,’ she added.

‘I don’t really think it’s a hero move. You can either fight or flight really.’

Incredibly, Ms Kaur took a moment to compose herself, rang the police, before continuing on with her shift as normal.

She said: ‘I kind of just had a breather, police came and I started calming down.

‘I just opened up again back to normal.

‘I was just kind of glad they ran off.

‘I felt a bit of an idiot in case I did get hurt, I was in two minds afterwards.’ 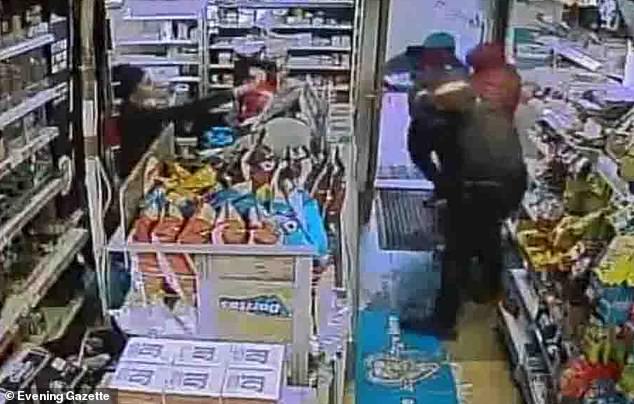 After she fended off the attackers (pictured, spraying the thugs), Ms Kaur took a moment to compose herself, rang the police, before continuing on with her shift as normal

Ms Kaur, from Stockton, said the shop is run by her father, Gurcharan Singh, who’s had it for around 10 years.

She says she’s previously trained in Gatka, a Sikh martial art, something which gave her the confidence to stand up and be counted.

Police are now hunting the suspects.

A Cleveland Police spokeswoman said: ‘We can confirm that police are investigating an attempted robbery.

‘No arrests at present. Inquiries are ongoing.’