Long Covid symptoms are MORE common in those with other illnesses, study finds

Long Covid symptoms are just as common in people who’ve never had the virus, according to a study that casts doubt over the true scale of the condition.

The US Government estimates that 23million Americans have long Covid, defined as symptoms that persist months after clearing the initial infection.

But scientists behind the latest research say stress from the pandemic might be the real reason so many Americans are struggling with persistent illness.

Around 1,000 adults were recruited across the US — with about seven in 10 having recently tested positive for Covid. The rest had a different respiratory illness.

Results showed that three months after being recruited, coughs, fevers, headaches and fatigue — the main symptoms associated with long Covid — were more common in the group that had never had the pandemic-causing virus.

It comes after a separate study found people who are unemployed and not looking for a job are more likely to have long Covid.

Researchers recruited 1,000 people for the study who recently had a respiratory infection. They were all tested for Covid and split into two groups. Three months later participants were surveyed again on long Covid symptoms. The results are shown above. It reveals that those who did not test positive for Covid were more likely to have moderate to severe symptoms of their infection three months later than those who did have the virus. The study was carried out in late 2020 and early 2021, over the period that Covid vaccines became available

In total, 54 percent of people with a respiratory illness that was not Covid said they still had lingering symptoms of the infection three months later.

For comparison, 46 percent of people with a positive Covid test said they still had symptoms.

Dr Lauren Wisk, a health services researcher at the University of California, Los Angeles (UCLA) who led the study, said: ‘Because these changes look similar for Covid negative and Covid positive participants, this suggests the experience of the pandemic itself, and related stress, may be playing a role in slowing peoples’ recovery from any illness.’

The study was done between December 2020 and September 2021 — when vaccines became widespread.

Long Covid is an umbrella term encompassing a range of symptoms — including fatigue, brain fog and sleep issues — that persist for more than a month after the infection.

It is still poorly understood, about three years after the pandemic virus first emerged.

Researchers at UCLA, who conducted the study admitted that their results may be biased because people who were severely ill were not able to take part in the study. 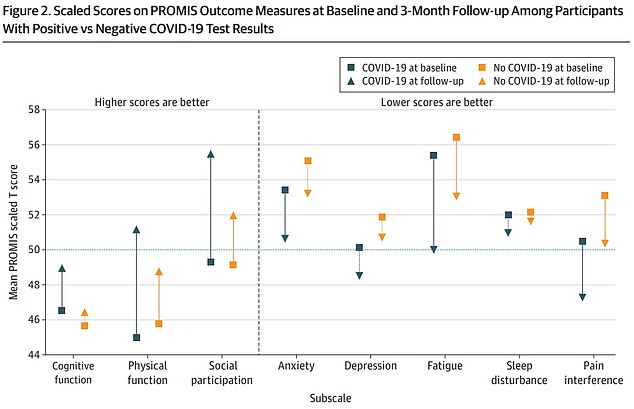 The above graph shows the results from the surveys done at the start of the study and three months after the initial infection. They were split by participants who tested positive for Covid (blue) and tested negative for Covid (yellow). Survey results showed there was no significant difference in symptoms suffered between the groups when they joined the study (left side) and afterwards (right side)

Previous studies have shown that those admitted to the hospital or the ICU are much more likely to have long Covid like symptoms months later.

But that is also the case with flu and many conditions that make someone so ill they need medication.

What is long Covid?

Long Covid is an informal term used to describe ongoing symptoms following a Covid infection that go on longer than four weeks, according to the ONS.

A dizzying array of symptoms have been attributed to long Covid, including:

There is no cure for the condition, though treatments can ease symptoms.

Nearly one in 13 Americans are thought to have the condition, while in the UK one in every 32 people are said to be suffering from the condition.

All were 18 years old or over and had recently recovered from an acute respiratory infection — with symptoms including fever, cough and runny nose.

They were recruited between December 2020 and September 2021, when the Alpha and Delta were dominant strains.

At the start of the study each was tested for Covid, and then completed a survey on the severity of any symptoms.

They were then asked to complete the same survey three months later to establish how their symptoms had changed.

Researchers did not speculate on what illnesses other participants had, although they may have included the flu or a bacterial infection.

Participants were scored on their physical, mental and social well-being for the study.

Researchers also found that there was no difference in symptom improvements between the two groups over the three month period.

Only social participation — such as seeing friends — improved significantly faster in those who had Covid compared to those who did not.

Doctors have known for years that patients can suffer symptoms of a disease — such as ‘long flu’ — for months after the body has cleared the infection.

Scientists are not clear on the cause, but it is thought to be linked to inflammation sparked by the immune system when clearing a particularly bad infection.

Dr Wisk added: ‘Many diseases, including Covid, can lead to symptoms negatively impacting one’s sense of well-being lasting months after initial infection, which is what we saw here.

‘Because these changes look similar for Covid negative and Covid positive participants, this suggests the experience of the pandemic itself, and related stress, may be playing a role in slowing peoples’ recovery from any illness.’

Dr Joan Elmore, an internal medicine expert at UCLA and co-author on the study, said: ‘Most other studies on long Covid do not have such a control group.

‘Researchers and doctors now have a better understanding of well-being outcomes related to Covid as a result of this study.

‘The findings highlight the potential widespread impact of the pandemic on our overall health, including the lesser-tracked emotional, social, and mental aspects, alongside the highly recognized physical effects.’

The multisite study was conducted in English and Spanish under the umbrella of INSPIRE (Innovative Support for Patients with SARS-CoV-2 Infections Registry).

The study was published today in the journal JAMA Network Open.