A miles-long row of cars was seen on Saturday as visitors descended en masse on Lake Mead which was reopened for the first time since the coronavirus lockdown went into effect.

At least 500 people visited Lake Mead on Saturday, where they lounged on the shore and swam in the water.

The National Park Service allowed annual pass holders only to visit the Lake Mead Recreational Area on Saturday, though state and local authorities are urging vacationers to maintain social distancing.

‘First of all, the kids are going crazy just being home and I’m pretty sure we all needed a break,’ one visitor, Jazz Lewis, told KTNV-TV. 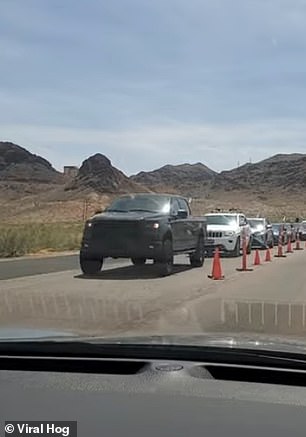 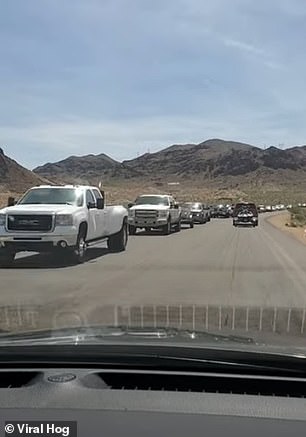 ‘There’s only so much you can do inside.’

Park rangers were on hand to make sure that bathers stayed at least six feet apart from one another.

Rangers were seen approaching large groups of people on several occasions and telling them to spread out – even groups that came to the site together.

Those who pitched tents were also told by park rangers to keep their distance from each other.

‘It is definitely a new normal that we have now,’ said Christie Vanover, Lake Mead Public Information Officer.

‘Some people are supportive of it, some people don’t care and just want to recreate.

‘But it is really important that if you come to Lake Mead, we need you to social distance.

‘It’s up to you to if this place stays open, if you follow the rules.

‘We want to keep it open for everybody to come out here.’ 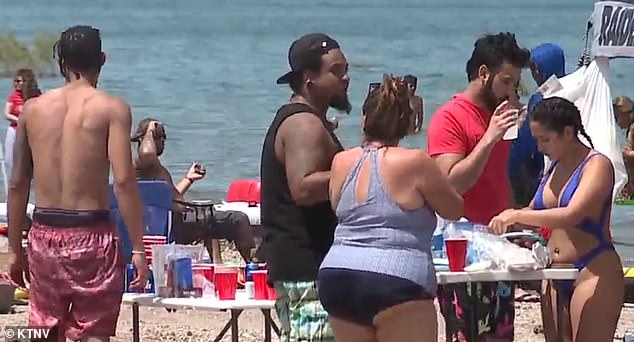 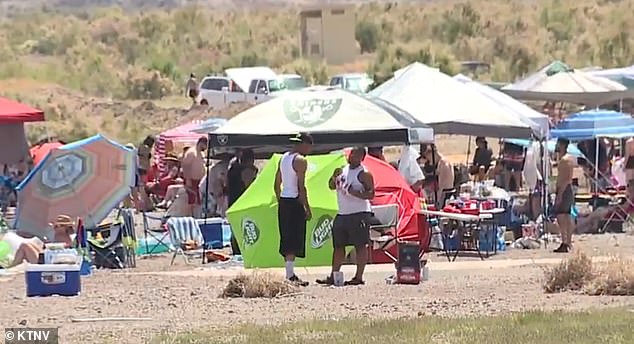 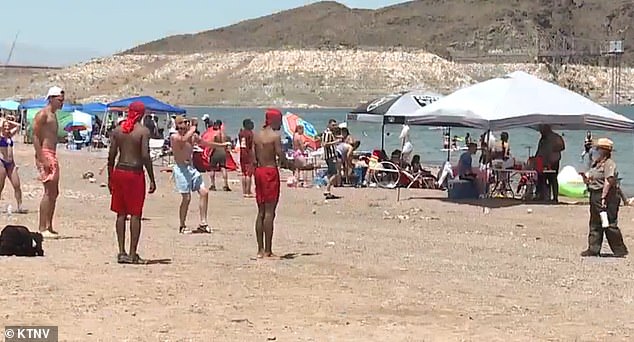 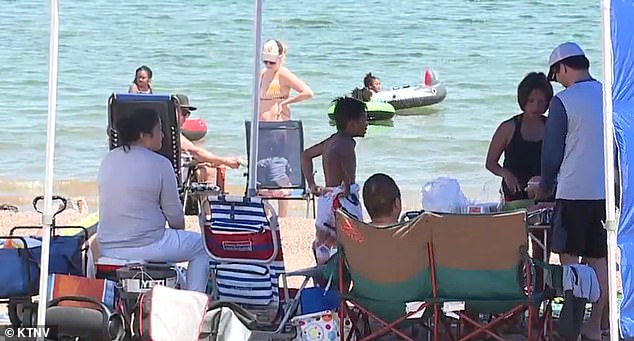 Visitors to Lake Mead are encouraged to wash their hands often, cover their mouths and noses when coughing or sneezing, avoid touching their faces, and to stay home if feeling ill.

Lake Mead, one of the more popular recreation destinations, lies about 25 miles east of Las Vegas.

Straddling the border between Nevada and Arizona, Lake Mead is the largest reservoir in the United States in terms of water capacity.

Nevada Governor Steve Sisolak’s office announced on Thursday that he has moved up the first phase of reopening the state’s economy from the previously set date of May 15 to this Saturday, May 9.

The state’s stay-at-home directive, which the governor extended, is due to expire on May 15.

The governor said he would begin to reopen the economy if the data showed a ‘consistent and sustainable downward trajectory of COVID-19 cases and decrease in the trend of COVID19 hospitalizations over a 14-day period.’

‘Phase 1’ of the governor’s plan calls for a ‘transition from community mitigation to case-based interventions.’

It may include allowing small businesses and some retail outlets to reopen but with strict social distancing measures in place.

The state will still encourage people to stay at home, particularly vulnerable populations.

Gatherings of more than 10 people would still be prohibited.

Businesses in the Las Vegas area have been especially hard-hit by the pandemic, as hotels and casinos that would normally be bustling have been forced to keep their doors closed.

But there does appear to be a light at the end of the tunnel. 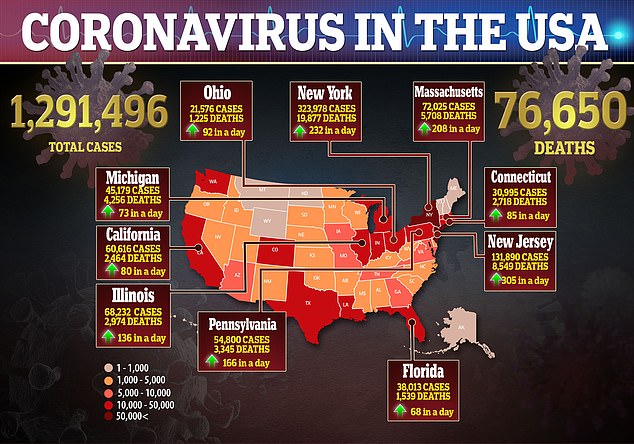 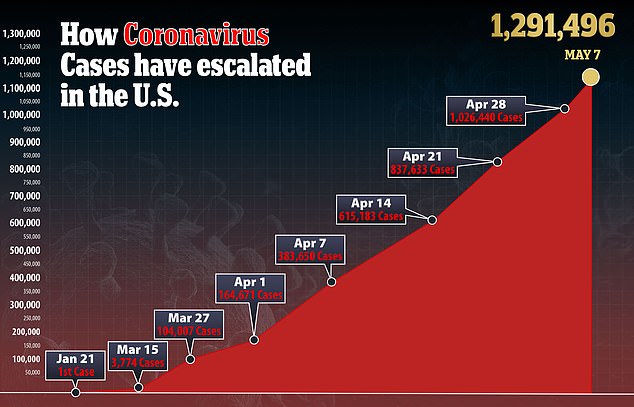 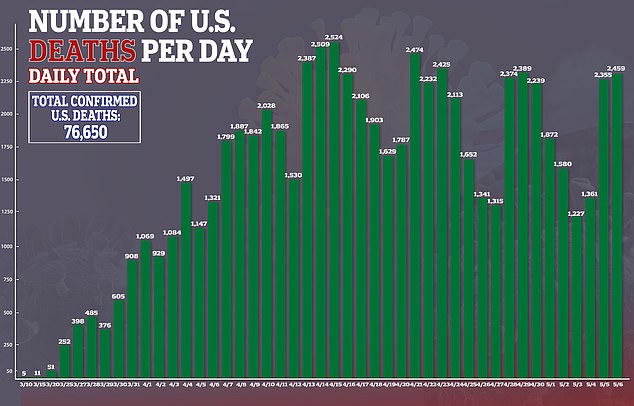 Nevada gambling officials approved rules Thursday to limit customers, keep gamblers spaced apart from each other and disinfect dice and cards when the state’s casinos are allowed to reopen.

The commission did not act on a request from the casino workers’ Culinary Union to incorporate the workers’ suggested health guidelines, including the testing of workers for COVID-19 and screening workers and guests with temperature checks upon entry.

The union also called for the commission to publicly release all re-opening plans submitted by casinos.

The operator of the Wynn and Encore casinos already took that step voluntarily.

‘We have to reassure guests that we are ready for them, that they will be safe when they come back. If we don’t get it right when we reopen, the long-term consequences for our industry will be devastating,’ the union’s leader, Geoconda Argüello-Kline, said in comments submitted to the commission. 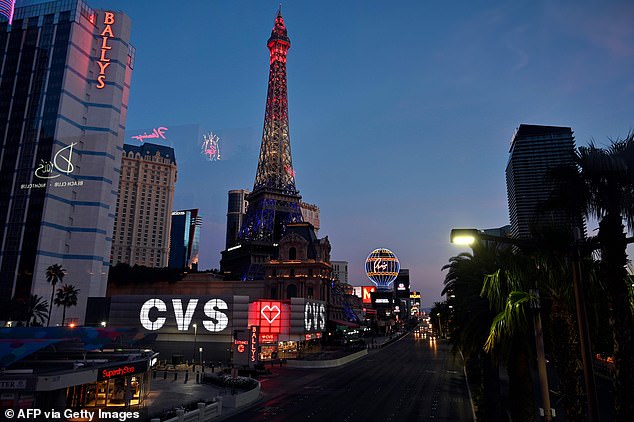 Nevada gaming authorities approved a series of guidelines for casinos in Las Vegas to reopen. The image above shows hotels and casinos on the Las Vegas Strip

Several other public comments raised concerns that with the stress of the virus, the risk of gambling addiction was high and others suggested using the reopening to limit or ban smoking, noting that protective face masks would have to be lowered if people are allowed to continue smoking in casinos.

Sisolak has not yet announced when casinos can reopen.

He took the unprecedented step of shuttering casinos and all gambling, including slot machines in convenience stores, in mid-March, as part of a broader shutdown of non-essential business.

He said last week that casinos would not be open ‘at the beginning’ of the first phase and did not make it clear if they could be open before the end of May.

Some Las Vegas Strip resorts have said they’re aiming to be open by Memorial Day, if allowed by the state.

Restaurants will have limited seating, swimming pool cabanas and lounge chairs ‘must allow for appropriate distancing’ and the usually tightly packed nightclubs and day clubs will stay closed for now.

Seating at table games should be limited to three players for blackjack, six for craps, four for roulette and four for poker.

Chairs should be removed from every second slot machine in order to keep safe distances between gamblers.

Casino managers and supervisors must work to keep customers from gathering in groups around tables. 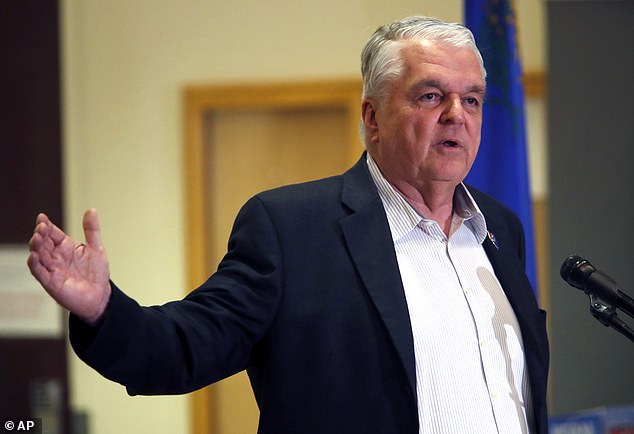 At least seven days before opening, casinos will need to create and enact plans detailing how they will sanitize everything, from chairs and slot machines, and regularly clean and disinfect dice, cards, roulette wheels and other gambling equipment.

For most people, the coronavirus causes mild or moderate symptoms, such as fever and cough that clear up in two to three weeks.

For some, especially older adults and people with existing health problems, it can cause more severe illness, including pneumonia and death.

The vast majority of people recover.

A Nevada group has formed to try to recall the mayor of Las Vegas, who drew condemnation from elected officials and others with her push to reopen casinos and suggestion that her city could serve as a test case to measure the impact of reopening during the coronavirus pandemic.

The city of Las Vegas released a letter Wednesday confirming it received a notice of intent from The Committee to Recall Carolyn G. Goodman to circulate a petition and try to have the politically independent mayor removed from office.

An emailed message seeking comment from the mayor was not immediately returned Wednesday night. 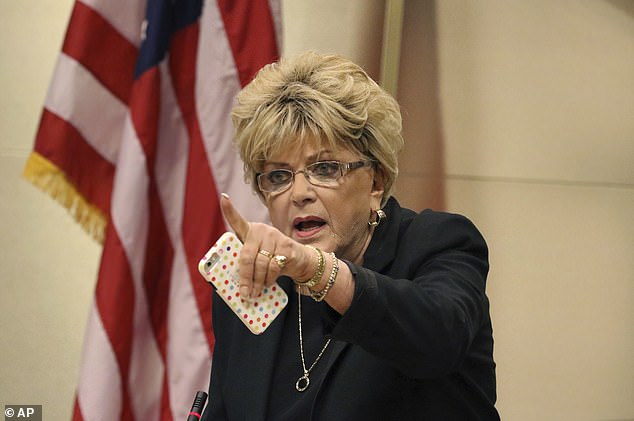 Goodman has issued public pleas for Sisolak to end the statewide shutdown of casinos and non-essential businesses, which she called ‘total insanity’ that was ‘killing Las Vegas.’

In an interview on CNN last month, she said that ‘viruses for years have been here’ and said she suggested that Las Vegas residents become ‘a control group’ to see how lifting closures and some restrictions would affect the city.

State and local officials called the remarks ‘reckless’ and ‘an embarrassment.’

Goodman last year was overwhelmingly elected to a third and final term as mayor.

The recall committee has until August 4 to collect 6,745 signatures on the petition.

Organizers of the recall committee could not immediately be reached for more details.