Longest partial lunar eclipse in 600 years to be visible in Australia TONIGHT: Here’s everything you need to know to catch a glimpse of the rare sight

Residents living on Australia’s east coast will be lucky enough to catch a glimpse of the longest partial lunar eclipse in 600 years on Friday night.

The longest partial eclipse since the 15th century will also be visible in North and South America, Africa, Eastern Asia and the Pacific regions.

Sydneysiders will be able to see the eclipse at 7.34pm on Friday where it will reach its maximum peak at 8.02pm.

The rare phenomena will finish at around 11.03pm with an expected duration of three hours and 28 minutes – durations will vary depending on where you live in Australia.

The true maximum point of the eclipse cannot be viewed due to the Moon being below the horizon at that time.

Stargazers who want to catch the best view of the eclipse are recommended to travel to a high point or find an area with free sight to the East-northeast. 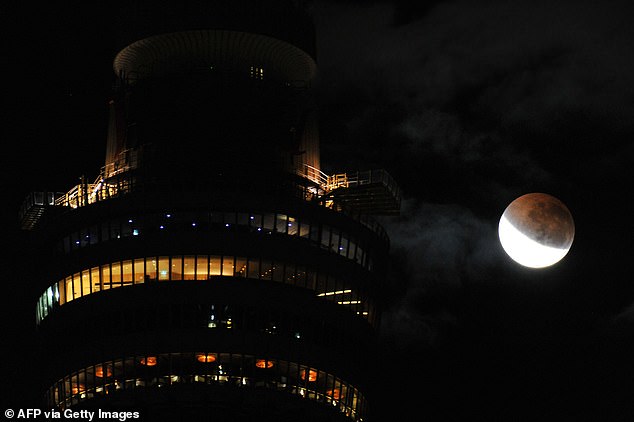 Stargazers who want to catch the best view of the eclipse are recommended to travel to a high point (pictured, a partial lunar eclipse next to Sydney tower)

A lunar eclipse occurs when the when the Sun, Earth, and Moon align so that the Moon slips into Earth’s shadow for a couple of hours, according to NASA.

During the partial lunar eclipse only part of the Moon – 97 per cent – will be covered by the Earth’s shadow.

The eclipse will occur just after sunset in the Southern Hemisphere where the moon will rise from the north-east changing colour from a luminous white to a deep red.

WHEN AND WHERE CAN I SEE THE PARTIAL ECLIPSE?