Jordan Karem, who worked closely with President Donald Trump as his personal ‘body man’ assisting the president in the White House and wherever he traveled, is departing his post.

Karem is one of a dwindling number of original staffers from the 2016 campaign to remain at the White House, having stepped into his current role in March.

As body man, he is often the first and last aide to see the president, and handles a variety of the president’s needs to make sure he is prepared when he traveled.

But unlike some previous body men, like President Obama’s longtime aide Reggie Love, Karem has not established much of a profile in Washington or around the country.

Trump in a statement called him a ‘great guy who I have gotten to know well over the last several years.’

Jordan Karem, the personal aide who has served as Trump’s ‘body man’ and director of Oval Office operations since March, is leaving. He’s seen her on Monday with Jared Kushner

‘He was with me from the beginning and I appreciate his loyalty and his commitment to my administration,’ Trump said, Bloomberg reported.

He was preceded by Johnny McEntee, a former college football player who was fired reportedly for security reasons only to find a role on the Trump reelection campaign.

Karem’s formal title was director of Oval Office operations, but that hardly describes the scope or nature of his duties. His role had him taking on the duties of both McEntee and Schiller.

He boarded Air Force One along with President Trump as the president traveled to Mississippi to campaign for Cindy Hyde-Smith on Monday. 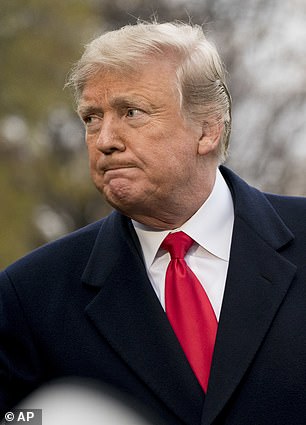 In a statement Trump praised Karem’s ‘loyalty and his commitment,’ adding, ‘I know he will do many great things in the future’

In 2018 Karem married Bianca Ktenas, a press aide at the Department of Energy.

Karem was one of the earliest staffers on Trump’s presidential campaign and one of the few remaining longtime loyalists in the West Wing.

His departure comes amid a wave of exits expected after the November midterm elections. Trump’s White House continues to set records for presidential staff turnover.

In a statement Trump praised Karem’s ‘loyalty and his commitment,’ adding, ‘I know he will do many great things in the future.’