Thousands of Britons could be spared unsightly scars after a hip replacement thanks to a new surgical method that ‘hides’ the wound in the folds of skin on the bikini line.

Surgeons have dubbed the nifty technique the ‘beach bod op’ as it allows patients to quickly and confidently slip back into swimwear.

Every year, tens of thousands of Britons undergo the procedure to remove an old, damaged joint and replace it with an artificial one.

Normally an 8in cut, made down the side of the leg, is needed to access the hip. But the new method involves a cut that’s both half the size and hidden in the crease between the leg and groin.

The technique, already widely used in Australia and the US, is said to be particularly popular with younger patients for cosmetic reasons. But the benefits aren’t only for appearances – the method could speed up recovery time and help the wound heal better.

Surgeons needn’t cut through tough tendons and the glutes – the large muscles in the buttocks – to access the joint. Instead, the incision on the bikini line creates a straightforward route through to the hip. The muscles are not cut, but pulled aside using surgical tools, limiting any damage.

‘The main benefit of the surgery is you avoid muscle damage. At the end of the operation, the muscles just flop back into place. You generally see less scarring, less post-operative pain, less reliance on painkillers, quicker mobilisation and quicker discharge.’

The hip joint is made up of a ball the end of the thigh bone – also known as the femur – and a socket, which is part of the pelvis.

Hip replacements, where the ball and socket are swapped for artificial parts, are most often needed in patients aged over 60 with arthritis. This occurs when the cartilage – the smooth elastic tissue that cushions the joint – wears away.

The bones either side then rub against the joint, resulting in pain and difficulty with movement. Mr Mellor, who also works at the Royal Free London NHS Foundation Trust, now uses the bikini line incision in most hip replacement operations. He believes it helps the wound heal more easily after the operation, because the skin crease is subject to less movement and stretching.

The ‘beach bod’ hip replacement takes around 75 minutes – about 15 minutes longer than the traditional approach. The patient is given local anaesthetic and sedation before being positioned on their back on the operating table. An incision about 4in long is made along the bikini line. The surgeon uses tools to move the muscles aside and hold them out of place. The joint is surrounded by a tough layer of tissue called the hip capsule, which must be cut through. The old damaged ball and the socket are then both removed. 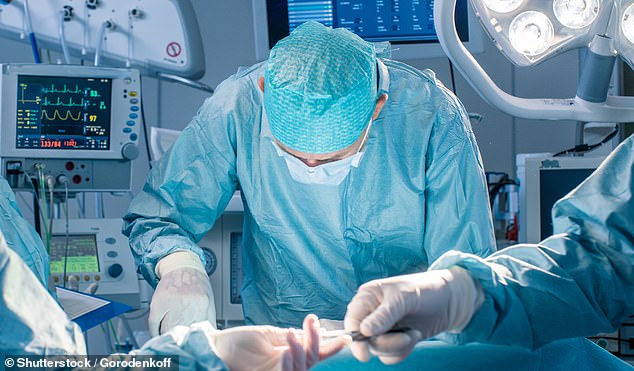 Surgeons needn’t cut through tough tendons and the glutes – the large muscles in the buttocks – to access the joint. Instead, the incision on the bikini line creates a straightforward route through to the hip (stock image)

The surface is smoothed out and a new socket – which the patient’s bone melds with – is placed inside. The leg being operated on is rotated into a different position. This allows the surgeon to access to the hollow inside of the thigh bone.

A metal implant is placed in the gap of the thigh bone and a new ball is attached to the top of it, and put inside the new socket. The muscles fall back into place, and the patient is stitched up. They are encouraged to walk soon after and some are well enough to go home within 24 hours.

‘Patients are usually expecting to see a big, long, bulky dressing on top of the leg,’ Mr Mellor says. ‘But because the scar is so small, the dressing is too.’

Sheila Barger, 72, from North London, had her left hip replaced with a bikini line incision procedure in June this year. The morning after the procedure, carried out by Mr Mellor on the NHS at Chase Farm Hospital in Enfield, she was able to walk. Within two days, she was back home.

‘It was amazing,’ she says. ‘I came out of hospital with only one crutch and didn’t have any pain. I’ve had friends who’ve had hip replacements and they’ve had a much longer recovery.’

The operation costs £10,600 privately with BMI Healthcare. Mr Mellor also carries out the procedure within the NHS.