Looter, 24, is killed in botched Philadelphia ATM raid as thieves blow up 30 machines to steal cash

A looter has been killed in a botched ATM explosion in Philadelphia, that police believe was part of a ‘coordinated’ effort to raid 30 machines across the city over a series of two nights.

Police said the 24-year-old man died early Tuesday, several hours after attempting to break into an ATM with explosives in the north of the city.

The man tried to use an explosive device to blow up a cash machine near Sidekick Sports Bar but was thrown to the ground and sustained trauma to his upper body, CBS 3 reported. He was rushed to hospital but later died.

Police said live explosives were recovered. The explosives did not penetrate the machine. His name wasn’t immediately released.

A member of the Philadelphia bomb squad surveys the scene after an ATM machine was blown-up at 2207 N. 2nd Street in Philadelphia, Tuesday 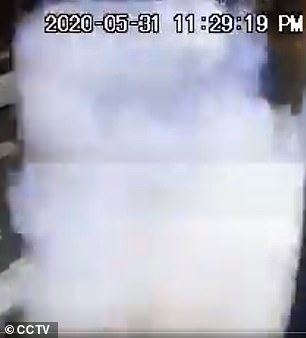 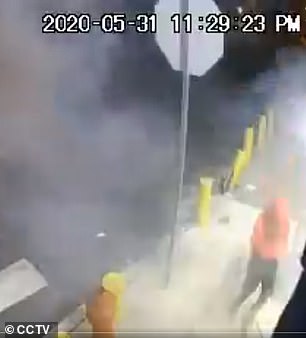 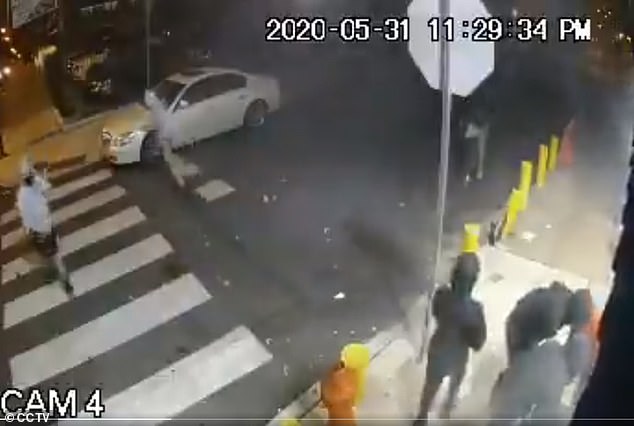 A group of thieves are seen raiding the machine on the bottom right, as people walk in the area (top left)

They came as police have been trying to cope with large demonstrations against police brutality and widespread vandalism and theft from businesses in a number of areas of the city.

On Tuesday, peaceful protests had taken place at Rittenhouse Square in the wake of George Floyd’s death. The 46-year-old black man died May 25 after he was restrained by Minneapolis police.

A statue of former Mayor Frank Rizzo was removed by the city early Wednesday after repeatedly being targeted by vandals. Rizzo presided over a police force widely accused of racism and brutality in the 1970s. The Bond by James West with George Washington (pictured) and Benjamin Franklin was also destroyed.

But after demonstrators have gone home before a 7pm curfew in the city, opportunists have wreaked havoc in the city during the unrest.

An ATM was snatched from a mini-mart and the windows of a gas station were smashed before thieves drove off with the ATM, WPVI-TV reported. 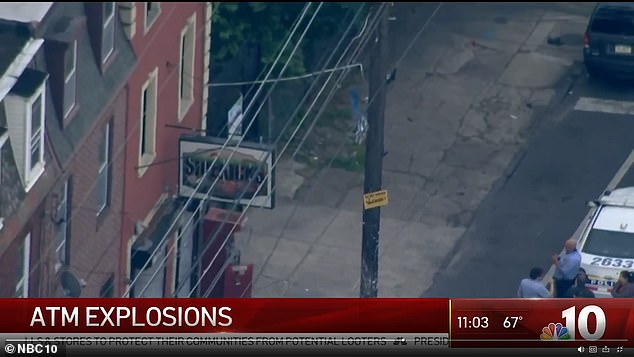 A 24-year-old man tried to use an explosive device to blow up a cash machine near Sidekick Sports Bar (pictured) but was thrown to the ground and sustained trauma to his upper body. He was rushed to hospital but later died

Footage from 7th Street and Girard Avenue in Fishtown captured at least three people involved in setting up an explosive device, running away and then returning to the ATM. They were armed with baseball bats.

A machine was targeted on Amber Street and East Allegheny Avenue in Kensington. A butcher said his shop was looted prior to the explosion.

‘They were out here. It was mobs of people out here and they got into pretty much every store: the Dunkin’ Donuts, the jewelry store, the Metro. It was a complete madhouse out here,’ the man told CBS 3. ‘I was in shock and I’m going on 53 so I’ve seen a lot, but nothing like that.’

CBS 3 reports the owner of the shop was taken into custody.

Two machines on 61st Street and Woodland Avenue in Southwest Philly were damaged.

But after another night of attacks, approximately 30 ATMs were damaged by Wednesday morning. 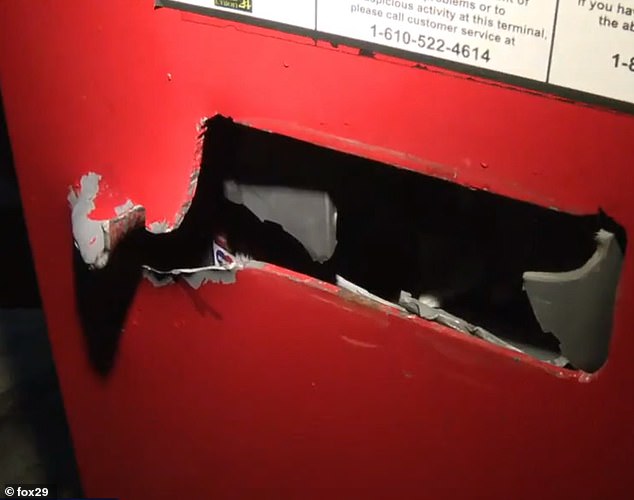 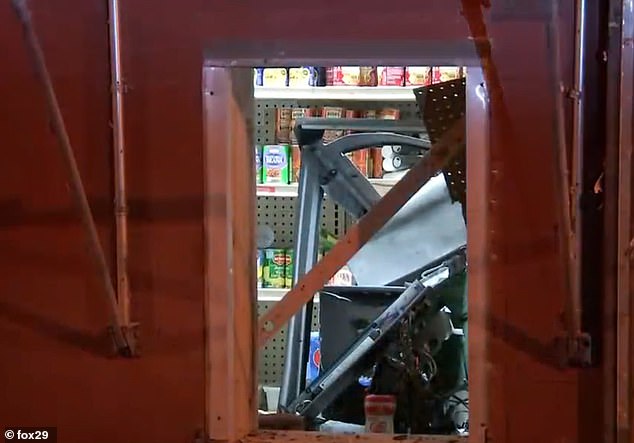 There were explosions across Fairmount, West Philadelphia, a strip mall in Drexel Hill and in Mount Airy at the Concos gas station on Tuesday night.

One of the incidents was outside the Blue Jay Restaurant at 29th Street and Girard Avenue in Brewerytown. The thieves were successful in obtaining cash Tuesday night after a failed attempt on Monday night, NBC 10 reported.

Two blocks away on the 1200 block of North 31st Street, a machine exploded outside iMunch Cafe.

CBS reporter Kimberly Davis said: ‘I heard a loud bang, and the flames shortly followed’. Davis shared video of police arriving on the scene of the ATM explosion at North 31st and Baltz Streets in Brewerytown after 10.30pm.

A explosion at an in-store ATM at Trust Deli on 26th Street and Brown Street saw shrapnel fly into the street and left a gaping hole in the storefront.

Police fielded calls from a failed attempt to blast open a steel machine on 50th Street and Market Street.

An Olney-area Citizens Bank near the intersection of 5th Street and West Godfrey Avenue was also left in a mangled wreck but it’s unclear when the blast took place.

The thieves mainly blew up the machines before making off with the cash. In some cases, they stole entire machines.

It wasn’t clear who was behind the ATM thefts or how much money has been stolen. No arrests were immediately announced.

‘We believe that it is organized efforts and coordinated efforts as well,’ Police commissioner Danielle Outlaw said.

The federal Bureau of Alcohol, Tobacco, Firearms and Explosives is taking the lead in the investigation. 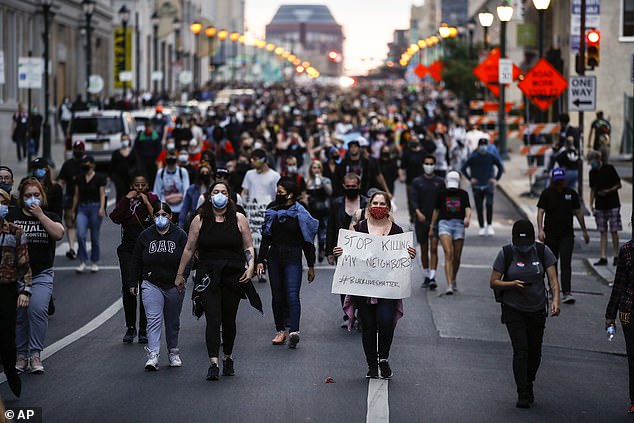 Demonstrators march Tuesday in Philadelphia, during a protest over the death of George Floyd, who died May 25 after he was restrained by Minneapolis Police 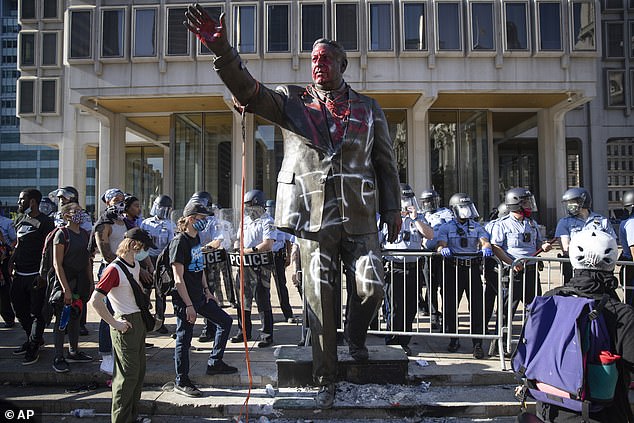 A statue of former Mayor Frank Rizzo was removed by the city early Wednesday after repeatedly being targeted by vandals. Rizzo presided over a police force widely accused of racism and brutality in the 1970s 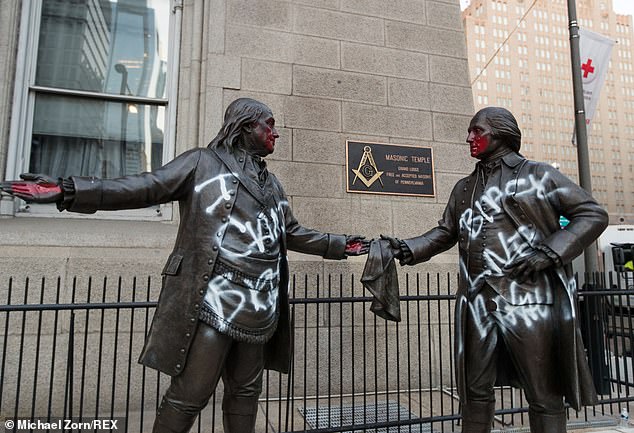